Accessibility links
Yes, Your New Car Has A 'Black Box.' Where's The Off Switch? : All Tech Considered Most newer cars have recorders that collect data at the moment of a crash and preserve key information. The data is meant to improve safety, but it's also useful in court. The federal government now wants to make the recorders mandatory on all new cars, but privacy advocates say people should have the option of turning their cars' recorders off. 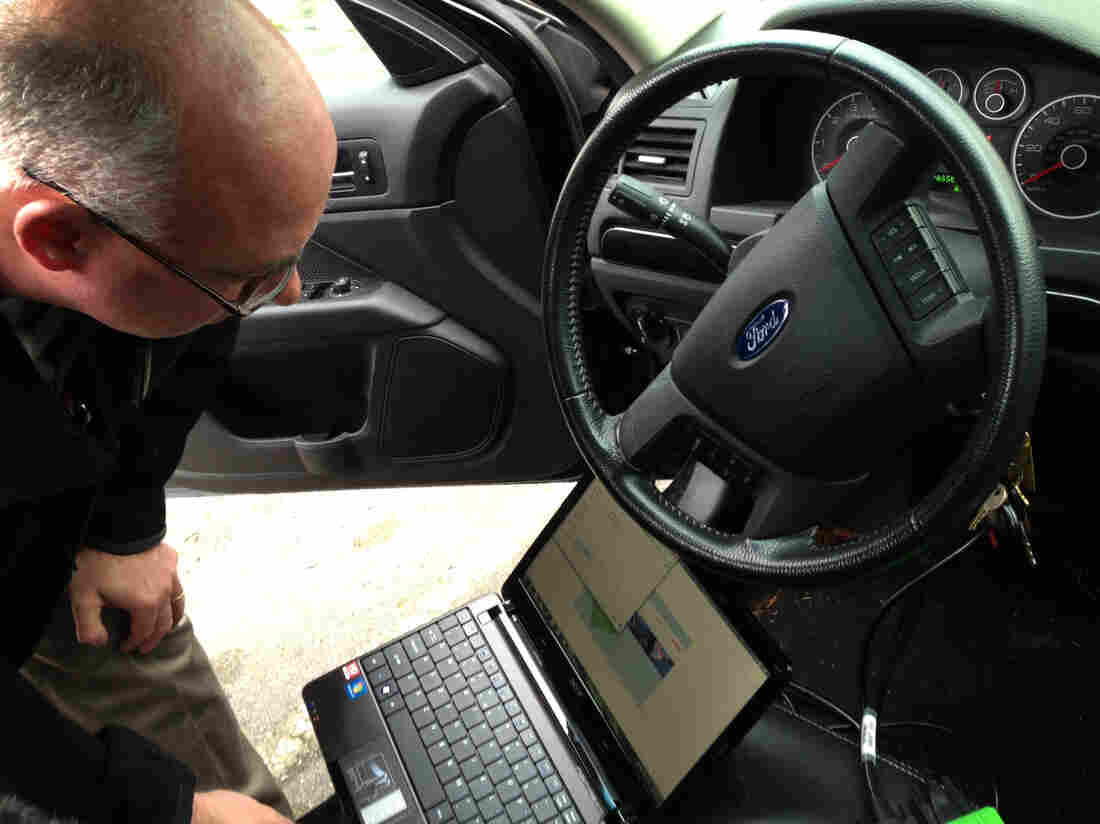 Detective Dave Wells plugs his laptop into a car's event data recorder. A large portion of new cars are equipped with the device, and the government is considering making them mandatory in all vehicles. But some say there should be an "off" option. Martin Kaste/NPR hide caption 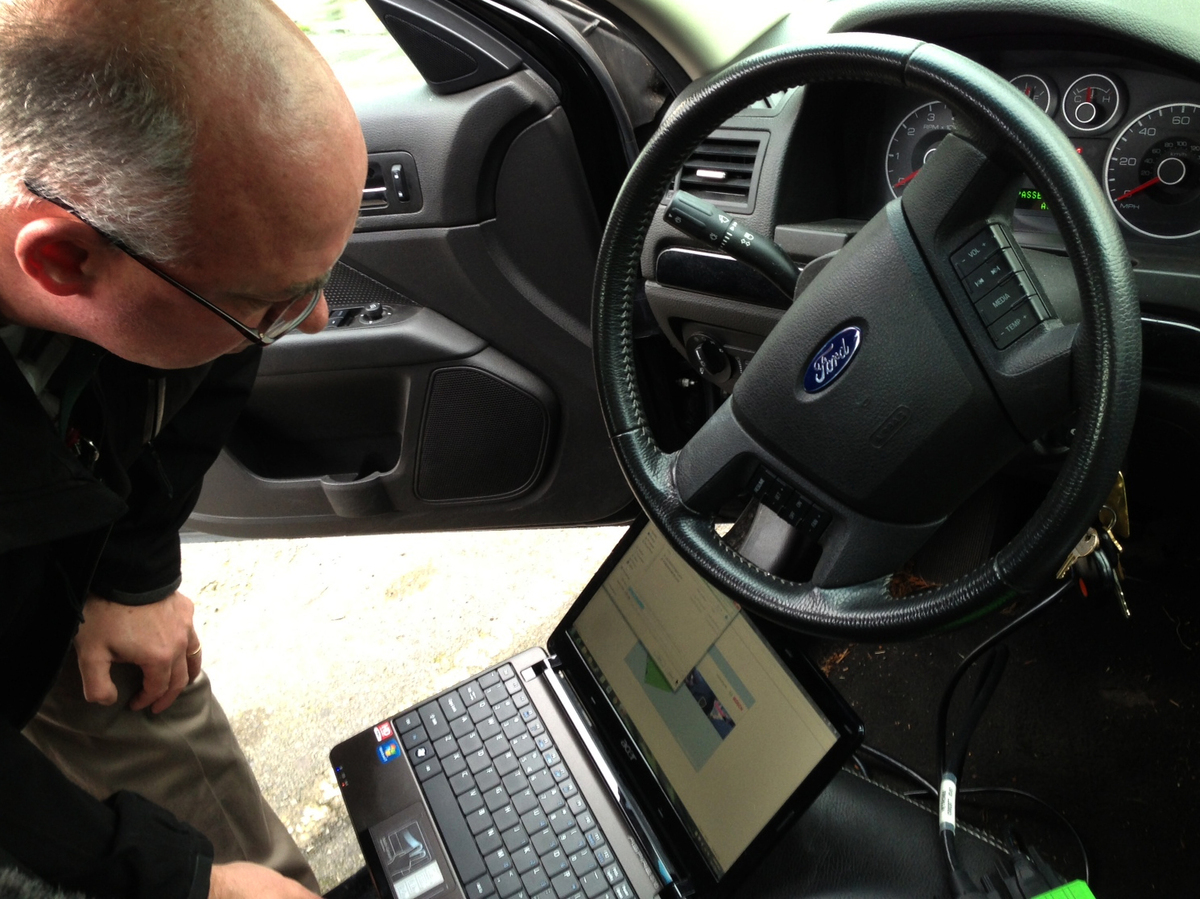 Detective Dave Wells plugs his laptop into a car's event data recorder. A large portion of new cars are equipped with the device, and the government is considering making them mandatory in all vehicles. But some say there should be an "off" option.

If you're a vehicle owner and happen to have a car accident in the near future (we hope you don't), it's likely the crash details will be recorded. Automotive "black boxes" are now built into more than 90 percent of new cars, and the government is considering making them mandatory.

Dave Wells, a detective at the King County Sheriff's Office in Washington state, specializes in accident reconstruction. That means he's often crouched under steering wheels, looking for the connector that mechanics use to get diagnostic codes. But Wells is using a different kind of tool, and it pulls out a very different kind of information.

Reading a sampling off his laptop, he says, "In the first 10 milliseconds they're up to a half-mile-per-hour acceleration."

This is crash data — moment-by-moment statistics saved from the car's most recent collision. There's speed, acceleration, braking — even information from inside the car.

"There are sensors under your seat," he explains. "So if someone tried to say there was another person in the car at a crash who had run away, this shows at the time of collision there was not."

The Black Box In Court

Put it all together, and you get a detailed picture of the seconds right before and after a crash. The information comes from something called an "event data recorder"; the EDR has become key to insurance investigations, lawsuits and even criminal cases. But that wasn't its original purpose.

"It was never designed for investigative purposes," Wells says. "It was designed for ... motor vehicle safety and keeping people less injured and alive."

EDRs are part of a car's safety system, which has to make split-second decisions, for example, whether to pull seat belts tighter or inflate the airbags. And engineers like to see data from real-world crashes to track how those systems are working. So the EDRs save the crash data, and as safety systems grow more complex, the recorders keep saving more information.

"I don't think you'll find very many Americans who know these devices are in their cars," says Rep. Michael Capuano, D-Mass. For eight years now, he has been trying to pass legislation giving drivers the right to opt out.

The Option To Turn It Off

EDRs have been around for a while, but the issue is surfacing again because the National Highway Traffic Safety Administration has proposed making the devices mandatory on all new cars, starting next year. That's caught the attention of privacy experts like Nate Cardozo, a staff attorney with the Electronic Frontier Foundation.

"The amount of data that they record is vast. And it's not capped," Cardozo says. "And I found that to be quite problematic."

Cardozo sees the safety value of the crash data, but he says it's important to set limits — especially as cars' digital storage capacity grows. He also says the feds should clarify who gets the data.

Some states restrict what insurance companies can do with EDR information and require police to get a warrant before plugging in. But in much of the country, it's still a gray area.

"They could do something like put a notification in the owner's manual saying that the driver has a reasonable expectation of privacy in that black box data. We think that would go a long way towards making the issue of who owns that data a lot more clear," Cardozo says.

NHTSA won't discuss its plans — because it's in the process of writing the proposed new rule making the recorders mandatory — but in the past, some NHSTA officials have suggested the privacy of crash data as an issue that should be taken up by Congress.

"More often than not, the data from this is going to help them in an accident," he says. "It's at least going to point out one thing, and that's the facts."

Wells says privacy-conscious drivers should worry more about GPS and built-in services that offer roadside assistance. The difference is, on new cars, those systems will still be an option.