Accessibility links
On Its 7th Birthday, Is Twitter Still The 'Free Speech Party'? : All Tech Considered The first tweet was posted seven years ago. Since then, the social media site has been used as a free speech platform to spread information, report on the Arab Spring and stay connected with millions worldwide. But critics say that as Twitter has grown, it has sometimes compromised its principles. 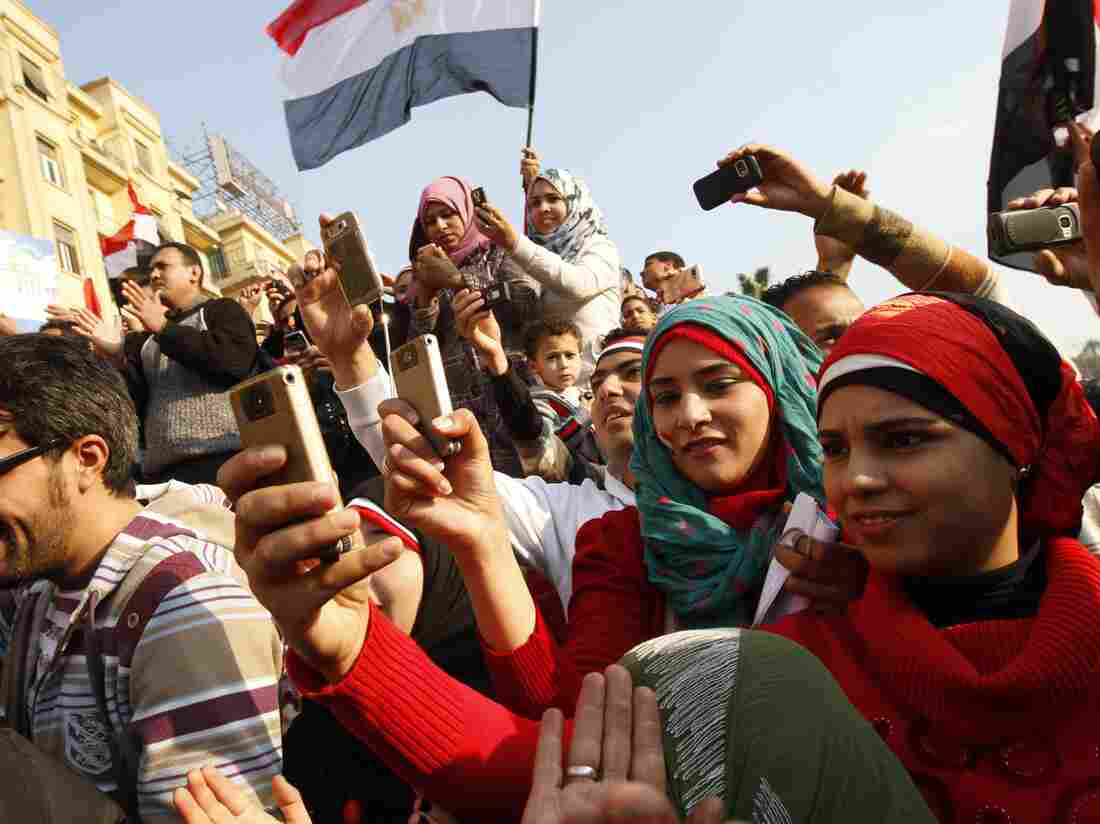 Egyptians use their mobile phones to record celebrations in Cairo's Tahrir Square, the epicenter of the popular revolt that drove Hosni Mubarak from power in 2011. Twitter was often used to record happenings during the Arab Spring. Mohammed Abed/AFP/Getty Images hide caption 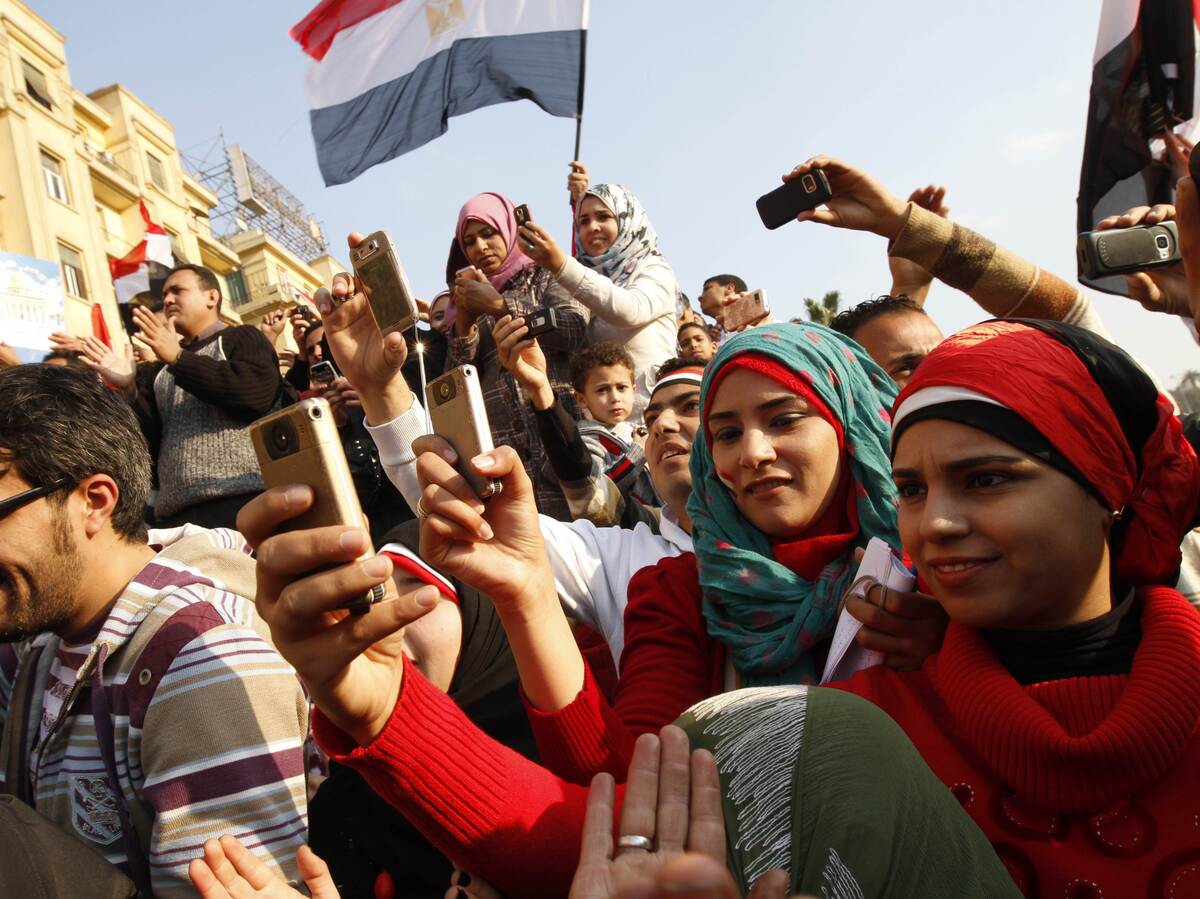 Egyptians use their mobile phones to record celebrations in Cairo's Tahrir Square, the epicenter of the popular revolt that drove Hosni Mubarak from power in 2011. Twitter was often used to record happenings during the Arab Spring.

It's hard to believe, but seven years ago no one had ever heard of a tweet. Thursday is the anniversary of the first tweet from Twitter co-founder Jack Dorsey. It wasn't profound. He wrote:

just setting up my twttr

Since then the social media company has been an important communication tool in everything from the Arab Spring and Occupy Wall Street, to its use as a megaphone for celebrities. Over the years, its relationship to its free speech principles has changed.

From Trivial To Global Town Hall

When it was founded, Twitter seemed rather trivial. I visited the company's tiny San Francisco offices in 2007 and spoke with co-founder Biz Stone. He told me about his first tweet.

"I was at home ripping up old carpet and sweating," he recalled. "It was terrible. It was gross."

Then Stone's phone buzzed in his pocket and he saw a tweet: "Evan Williams is wine tasting in Napa."

Jason Pontin, the editor in chief of MIT's Technology Review, recalls that he didn't think Twitter was good for anything more profound than those first tweets.

He says at the time he thought "Twitter was in the business of allowing people to advertise trivialities."

Today, Pontin says he thinks of Twitter differently, and so do its executives.

"We think of Twitter as the global town hall," says Twitter CEO Dick Costolo. "When you walk into it, there are many things you can do: You can go listen to the musician. You can pick up the news. You can purchase things."

Twitter says it now has more than 200 million active users all over the globe.

Costolo can point to a lot to back up that statement — from the regular flow of tweets from Chinese artist and dissident Ai Weiwei to Twitter's role in the Arab Spring.

As protesters faced down Egyptian police, they used Twitter to let the world know what was happening.

"If you're in a place like Tahrir Square and bullets are flying around you and you need to quickly get the message out, well, then shooting out a quick text message is certainly one way of doing that," says NPR's Andy Carvin, who used Twitter to amplify the news from Egypt to his Twitter followers. "It made it easy for a critical mass of people to access it when breaking news was happening somewhere."

In the midst of the protests, Twitter was scheduled to power down for site maintenance. But the company got a call from the U.S. State Department asking it to wait because of its crucial role in communication for the democracy movement.

Ironically, Twitter's biggest battles against censorship began in Western democracies. Unlike the U.S., many European countries have laws against hate speech. Last year in France, there was a torrent of anti-Semitic tweets.

Because of anti-Jewish violence in France, Petit's organization went to Twitter and asked that the company follow French law and take down the tweets.

Costolo says though people won't see the tweets in France, Twitter's software will let them know the accounts are being censored.

But the French court also asked Twitter to turn over the names of the people who sent out the hate tweets. Twitter refused. Pontin of MIT Technology Review says he thinks Twitter's compromise is full of contradictions.

Twitter also drew fire last year during the Olympics, for which the company had a commercial partnership with NBC. Journalist Guy Adams, a vocal critic of NBC, tweeted the email address of an NBC executive to which Adams' followers could send complaints. A Twitter employee alerted NBC and said it could have Adams' account taken down. NBC did.

Costolo says it's a mistake they won't make again.

"I had a long conversation with that person about the way we think about our users here and that it's not our job to be the editor of what's right and what's wrong and what's good and what's bad on Twitter," Costolo says. "That's for our users to police and report and decide."

Despite the apology, the situation laid bare the problems that Twitter confronts as it balances being a profitable international business and an open media platform. Its aim is to be the place where comedians Steve Martin and Albert Brooks can have a spontaneous conversation, where you can tweet about a bad cup of coffee, and where dissidents can take on the Chinese government.

Costolo says he is aware of the challenges, but he says he believes "creating a platform where people can be safe and can be free to walk into the town square and have the conversations they want to have will ultimately benefit the business more in the long run."

So far, Twitter's export of American-style free speech values is turning out to be a profitable formula. The question going forward is whether Twitter can stay true to its mission of being a beacon of free speech and a commercial success.