Accessibility links
Why Are TV Remotes So Terrible? : All Tech Considered While the quality of TVs and technology seems to be at an all-time high, the devices we use to access the living room screen are as confusing as ever. But tablets and apps offer hope of simplifying the process of finding shows to watch — and even interacting with other viewers. 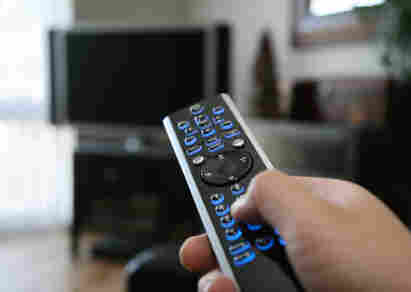 The buttons, symbols and signs on many modern TV remotes make for one confusing user interface. iStockphoto.com hide caption

If you go to someone's house and pick up the TV remote, chances are, you won't know how it works. You know the situation's bad when even a tech writer who also majored in physics at an Ivy League school is confused by her own TV remote.

"It's unbearable to me," moans Ars Technica writer Casey Johnston, of her remote's many cryptic buttons. "Sub.code? Comp/mix? I couldn't even tell you what one of those things do, but then assign them to the same button? It just doesn't make any sense."

So why, at a moment when both technology and TV shows are so terrific, are interfaces so clumsy and counterintuitive?

By interfaces, I mean both the actual, super-inscrutable remote controls and the unwieldy grid on our screens that many of us are forced to navigate to find what we want to watch.

And I have to confess the entire idea for this piece was inspired by Alan Wolk. His official title is global lead analyst at KIT Digital, and he writes a terrific blog called The Toad Stool. That's where I read his essay, "The TV Business: A Primer For The Uninformed," which elegantly points out how inelegant our TV interfaces are.

Wolk says our interfaces were designed to handle only six or seven channels, not 600 or 700. And there simply hasn't been enough incentive from the industry side to improve them. He predicts in the next few years, tablets like iPads will be the new remote and grid wrapped up in one.

"And that will finally give you a keyboard," he notes. "So if you're searching for a show, you can type it in instead of doing that awkward thing where you have to use the remote to move from letter to letter."

Jeremy Toeman agrees. "That grid guide that takes 15 seconds for every screen you're trying to load is just a pain," says Toeman, a tech entrepreneur among those helping turn tablets into something better than the next generation of remote controls. His company, Dijit, designed an app called NextGuide. It prioritizes shows you watch and lets you filter channels you're uninterested in. It includes Netflix. You can program it to record some programs remotely.

The Internet lets you do so much more with a tablet while watching TV. People watching NFL games might automatically receive statistics and information about players. Or if you're watching a drama, you can connect with other fans in real time on social media. All this sounds great to network executives like Jesse Redniss, senior vice president of digital for USA Network.

"Right now there really isn't a way we can use the grid to help market new people into our programming," he says, adding that tablets will open up new possibilities for cable channels and companies. "How do we gather as much information as we can about certain people, target demographics, and how do we create content that would interest them?"

So while you and I are watching TV in the very near future, our remotes will be watching us.