Accessibility links
Solar-Powered Plane Uses Its Lightness To Fly In The Dark : All Tech Considered Creators of a solar-powered aircraft hope to fly it day and night across the U.S. with no fuel, and eventually around the world. It's a quixotic — some might call it nutty — undertaking. But the creators hope the flight helps challenge assumptions about what solar technology can do. 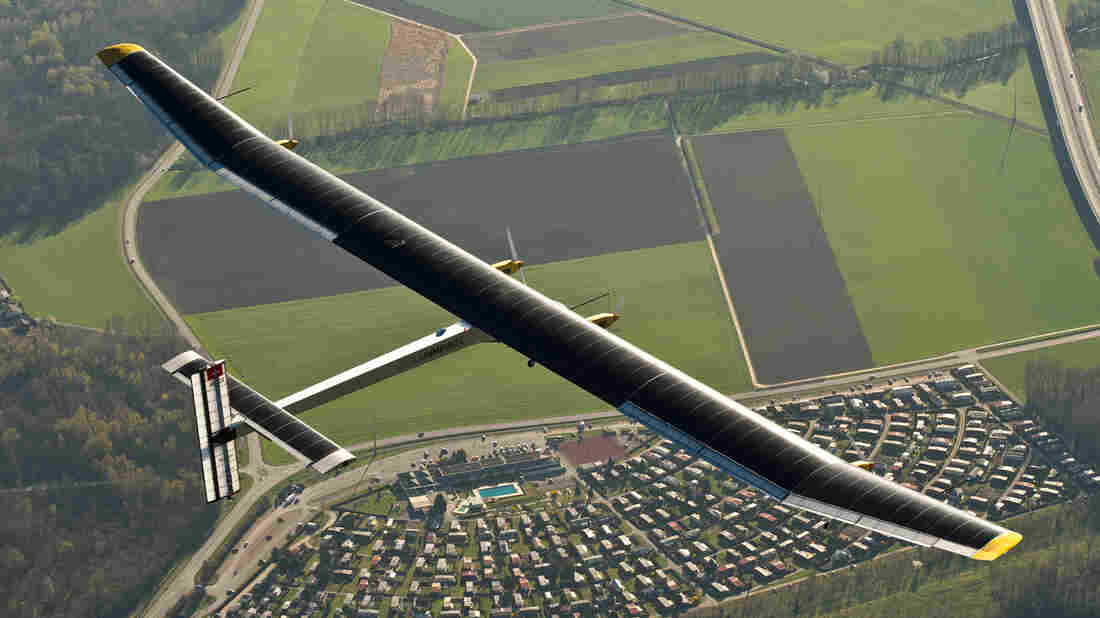 The Solar Impulse, a solar-powered plane, flies over Switzerland. The makers will be journeying across the U.S. this spring, hoping the flight helps challenge assumptions about what solar technology can do. Courtesy of Solar Impulse hide caption 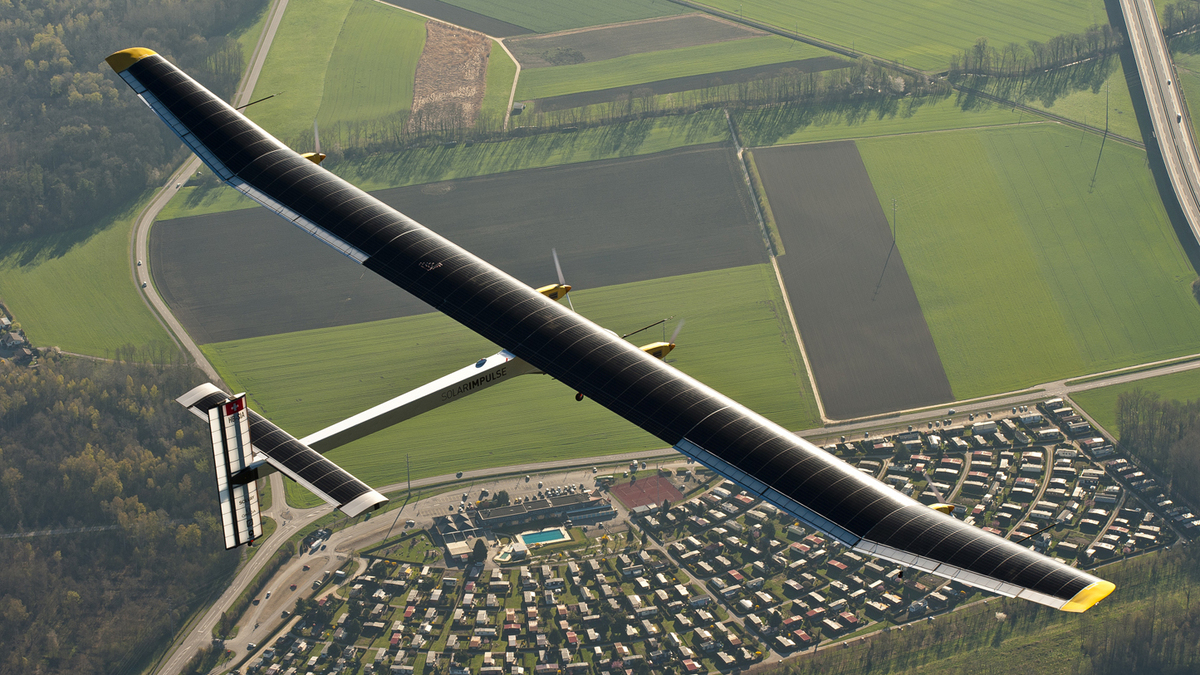 The Solar Impulse, a solar-powered plane, flies over Switzerland. The makers will be journeying across the U.S. this spring, hoping the flight helps challenge assumptions about what solar technology can do.

Next month, a very odd looking plane will take off from Moffett Field in Mountain View, Calif., and head east to New York. The Solar Impulse — the world's first solar-powered plane — is capable of flying nonstop all day and all night. Its creators plan to fly it across the U.S. this spring, and by 2015 they hope to fly a similar aircraft around the world.

Its wingspan is longer than a 747 Boeing, but the entire plane weighs less than a car.

"That was the challenge," says Andre Borschberg, one of the creators and a pilot. He says the wings are so large in part to generate lift and in part to create a bigger surface "to integrate solar cells."

Without Fuel And With An Idea

The idea to try to build a solar-powered plane that could fly nonstop through the night began with Borschberg's partner, Bertrand Piccard, who became internationally famous in 1999 after circumnavigating the world in a balloon. But while on the trip, Piccard nearly ran out of fuel.

"He really asked himself if it could ... be possible to get rid of this [fuel] dependence. So that is how the idea started," Borschberg says.

Design work on the plane began 10 years ago. Today, standing under buzzing fluorescent lights inside a huge hangar, the Solar Impulse looks like some kind of giant, space-age great egret on steroids.

Its long, delicate wings are covered in photovoltaic cells. They tilt up at the ends. The plane has four electric engines and a narrow little cockpit that seats just one person.

Everything about its design was dictated by the size of the wings and the power of the sun striking them. Borschberg says through physics and aerodynamics the developers discovered they couldn't make it heavier than the weight of a car if they wanted to operate it over 24 hours. "That was the starting point," he says.

The solar-powered plane flies at night.

To keep the weight down, they used a carbon-fiber frame and as few batteries as possible, and stripped the cockpit bare. In this plane the toilet is built into the pilot's seat.

"There is no heating, there's no pressurization, so we need an oxygen mask," Borschberg says. "So, yes, it's more difficult and maybe less comfortable than flying through an airliner."

But the designers succeeded in creating a plane capable of flying continuously — without using any fuel.

"The contact with the external world is much more intense," Borschberg says. He describes the ride as a close relationship with the environment — you can hear more and feel more of the outside compared with a regular aircraft.

Two years ago, Borschberg kept this plane aloft over the Swiss Alps for 26 straight hours. And last summer, he flew it from Spain to North Africa.

But it's tricky to fly.

The plane isn't at jet speed yet — it can only fly at 40 or 50 mph. It travels so slow that sometimes when it turns into the wind, it appears to float in place on radar screens, or occasionally even slide backward.

During long daytime flights, the pilots will climb to almost 30,000 feet and then slowly descend during the night. It's one more way to conserve energy.

"We had to learn to do things very slowly, to wait to see the reaction, to be patient," Borschberg says.

And to also be careful, because the wings are so long and the plane is so slow, even a slight bank can cause the tip of the inside wing to lose lift.

Pilots only turn a few degrees when flying the plane, because if they turn too sharply, the Solar Impulse could tumble out of the sky. So designers created a unique physical warning system that vibrates the pilot's arm when a turn is too steep, Borschberg says.

When Piccard and Borschberg attempt to fly around the world, one of them will need to remain in the pilot's seat over the Pacific Ocean for four or five days straight. The makers recognize that solar will never power commercial flights, but Borschberg said this flight was meant to push people's assumptions about what solar technology can do.