Accessibility links
How One College Is Closing The Computer Science Gender Gap : All Tech Considered At Harvey Mudd College in California, about 40 percent of the computer science majors are women. That's far more than at any other co-ed school. And it's thanks in large part to the school's president, Maria Klawe. She has worked hard to keep women interested in computer science and empower them to succeed in the field. 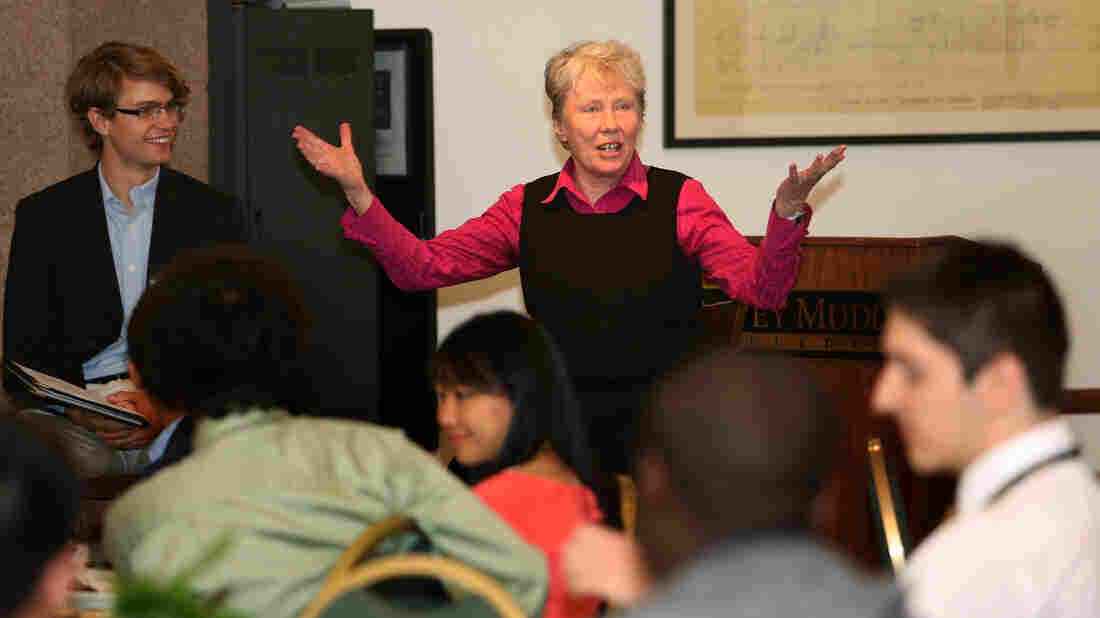 Harvey Mudd College President Maria Klawe talks to a group of newly admitted students on the campus in Claremont, Calif. Klawe has had a great deal of success getting more women involved in computing. Courtesy of Harvey Mudd College hide caption 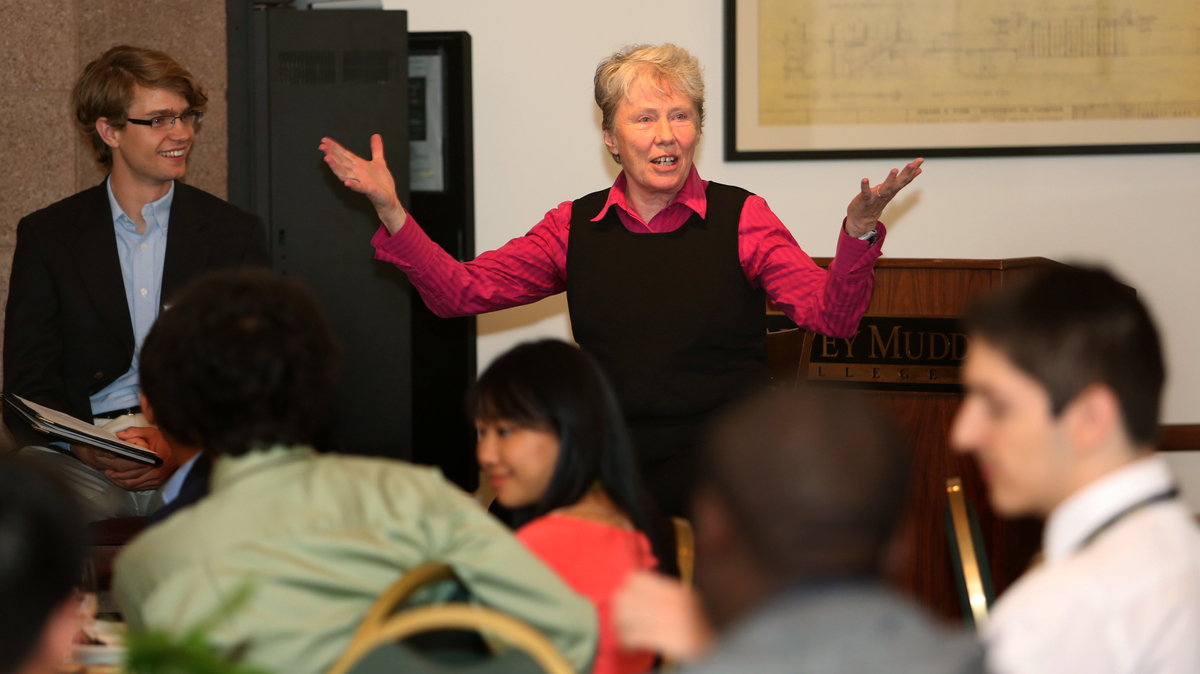 Harvey Mudd College President Maria Klawe talks to a group of newly admitted students on the campus in Claremont, Calif. Klawe has had a great deal of success getting more women involved in computing.

This story is part of our series The Changing Lives of Women.

There are still relatively few women in tech. Maria Klawe wants to change that. As president of Harvey Mudd College, a science and engineering school in Southern California, she's had stunning success getting more women involved in computing. 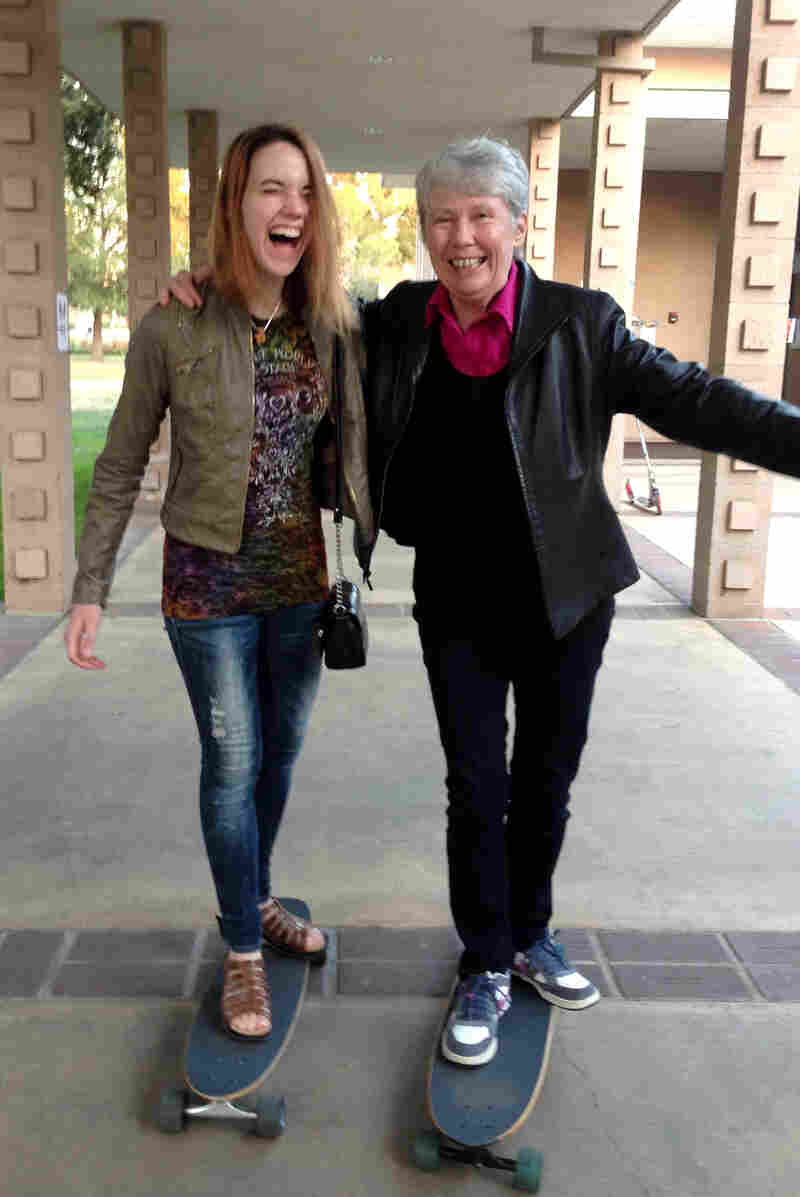 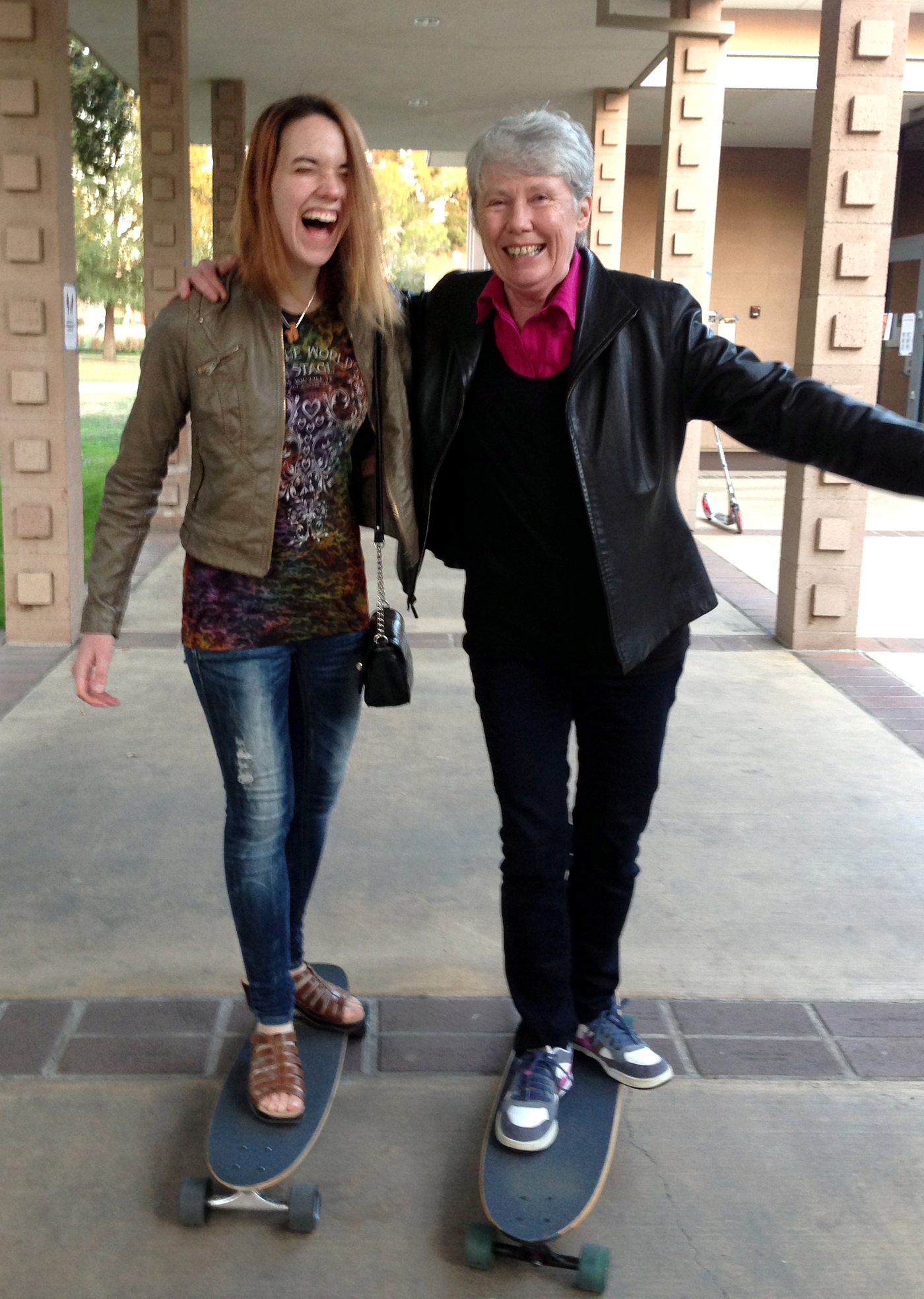 Harvey Mudd President Maria Klawe often uses her longboard to get around campus and chat with students like senior Xanda Schofield.

Klawe isn't concerned about filling quotas or being nice to women. Rather, she's deeply troubled that half the population is grossly underrepresented in this all-important field. Women aren't setting the agenda and designing products and services that are shaping our lives. They're getting only about 18 percent of the bachelor's degrees in computer science, and in the workplace their numbers aren't much higher.

Seated in her modest office on the Claremont, Calif., campus, Klawe, 61, reflects on the stereotype of computer scientists as anti-social nerds, saying it's out of date. But she is quick to add that women often face barriers spoken and unspoken that discourage them from entering the field.

She recalls her own experience growing up in Canada, where she was a top university math student.

"Professors would say to me all the time, 'Why do you want to be a mathematician, Maria? There are no good women mathematicians.' And it just really bugged me," Klawe says.

And that helps explain a career choice she would make decades later. Back in 2005, Klawe was thriving as dean of the engineering school at Princeton. But when Harvey Mudd College approached her about becoming the school's president, she was intrigued. She saw an opportunity to change science and engineering education.

"We're not attracting and retaining enough talent, and especially in areas like computer science. And I think what I recognized was this might be a place that could actually make a difference with that," Klawe says.

With just 800 students and an emphasis on teaching, Klawe believed that Mudd would be an ideal laboratory.

Finding A Passion In Computer Science

More than 100 students are paying rapt attention in Colleen Lewis' second-semester computer science course, and a lot of them are women.

"A lot of universities have this kind of weed-out class," says Kate Finlay, a student at nearby Scripps College who's taking Lewis' course. "The first class you take is a weed-out class, and they are shocked by the fact they don't get any women at the end. But the only people at the end are the people who have been in computer camp since they were 5." 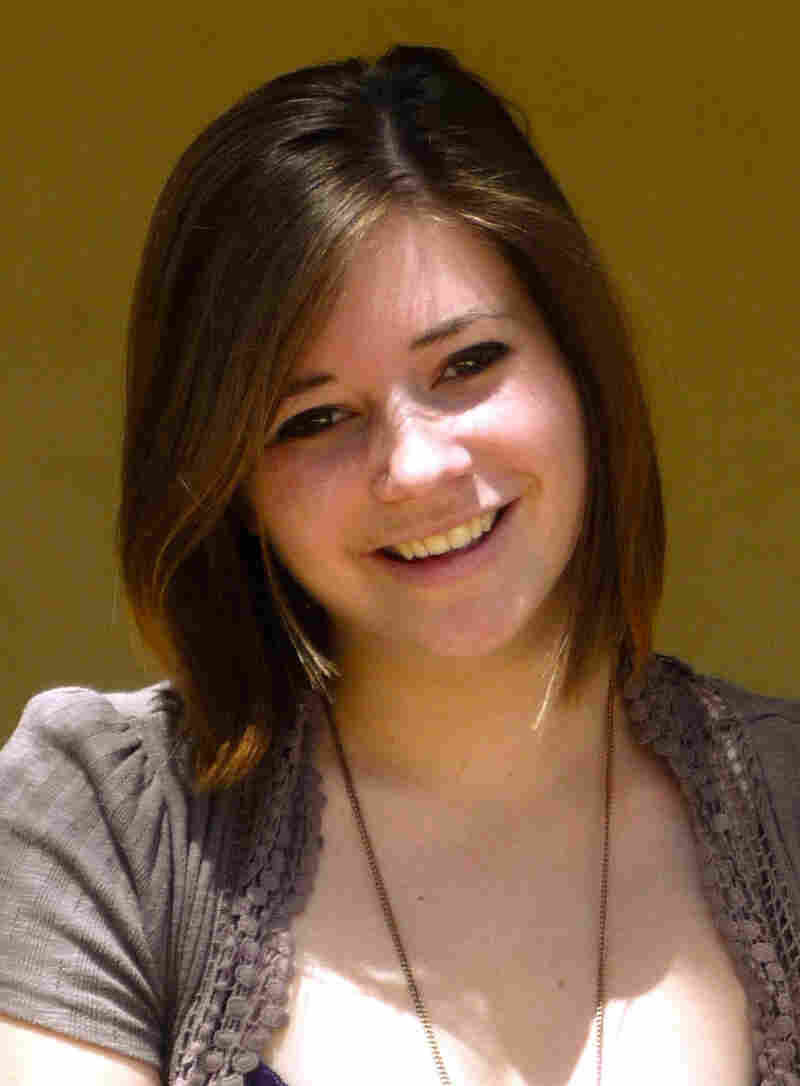 What Harvey Mudd recognized and explicitly addressed were ways to get women interested in computer science, so students like Finlay who've never been to computer camp have their own introductory classes. The kids with experience have theirs. Know-it-alls in any section are told to cool it so no one is intimidated. As for the content, Finlay says it's designed around problems they can relate to.

"They had all these really fun assignments — sound editing Darth Vader's voice; every single answer on the quizzes was 42, in a reference to Hitchhiker's Guide to the Galaxy," Finlay says. "It was so much fun; it was so much fun."

Finlay, who had planned to study art and psychology, found a new passion in computer science.

Along with changes to the introductory courses, Mudd works hard to keep women interested in the field. First-year students attend a giant conference for women in computing. There are research opportunities and coursework that involve solving real problems for major companies. Technology experts like Alan Eustace, a senior vice president at Google, are applauding the initiatives.

"I think they're fantastic," Eustace says. He also cites Mudd's rigorous academics and the critical mass of women studying together.

"They also have great female instructors, and I think that makes a big difference. ... Harvey Mudd is an example of what I consider a model for the future," he says.

Much of this might sound pretty basic, but the approach is highly unusual in higher education, and the efforts have paid off. At Mudd, about 40 percent of the computer science majors are women. That's far more than at any other co-ed school.

As for the male students here, they seem to appreciate and value having more women in their computer science courses.

"Women and men work through problems in very different ways," says Luke Mastalli-Kelly. "Men will oftentimes just try to pound through a problem, and then one of the women will be, 'Wait, hold on, how about if I ask this question?' " 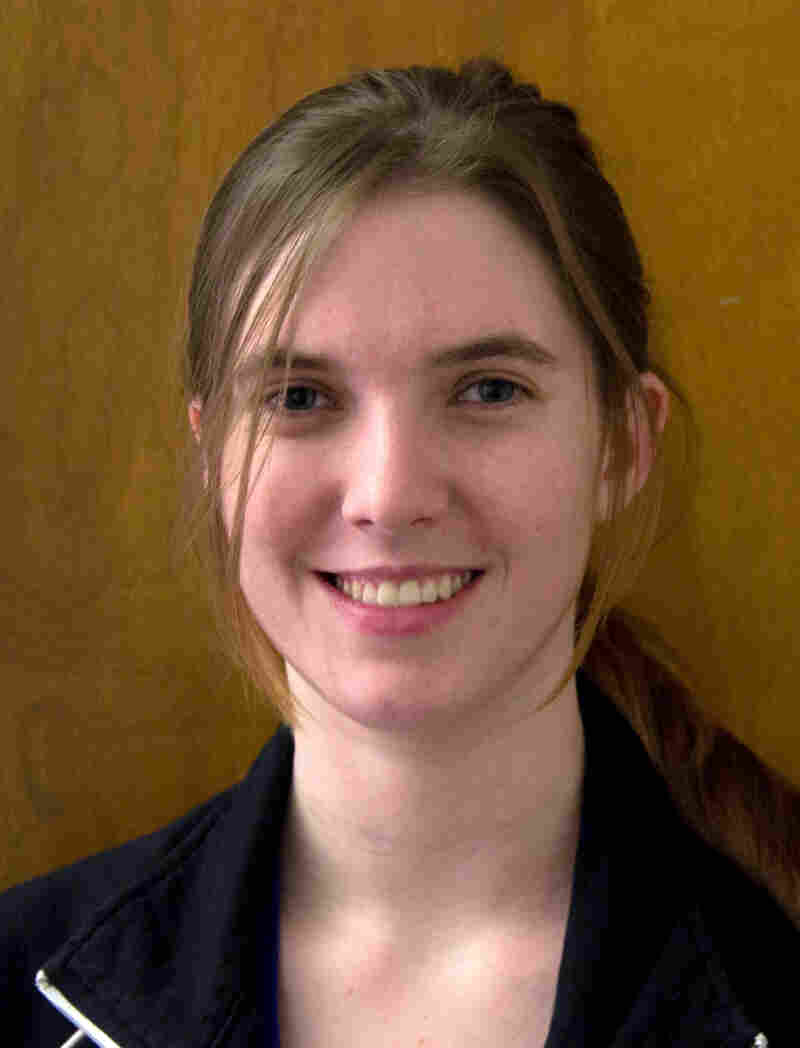 Jess Hester, a senior at Harvey Mudd, says she wants to write software for spaceships when she graduates. Courtesy of Jess Hester hide caption

Their questions can lead to further exploration and perhaps a more elegant solution. Indeed, technology companies say they want more women because diverse teams often do a better job of solving problems and creating things.

Senior Jess Hester was one of several female computer science students who offered their views on why there are so few women in their field. They bemoaned middle and high school math teachers who didn't engage or inspire. They recounted conversations with adults who told them, "Men are better at this." And they shared some apprehension about working in a male-dominated environment.

"If you fail, it's not just you. It is you as like a sacrificial lamb for your whole gender. It's just like a bucket of stress that we don't need," Hester says. "But I also want little kids to look up and be like, 'Awesome. I want to do that.' "

And that would be music to Klawe's ears. She says if you can make computer science interesting to women, empower them so they believe they can succeed, and then show them how their work can make a difference in the world, "that's almost enough to change everything."

Klawe is now working on a new project — a massive open online course, or MOOC, aimed at 10th-graders. It's just one more way the president of Harvey Mudd hopes to get more women at the technology table.