Accessibility links
A New 'Smart Rifle' Decides When To Shoot And Rarely Misses : All Tech Considered A new rifle goes on sale on Wednesday, and it's not like any other. It uses lasers and computers to make shooters very accurate. A startup gun company in Texas developed the TrackingPoint rifle, which is so effective that some in the shooting community say it should not be sold to the public. 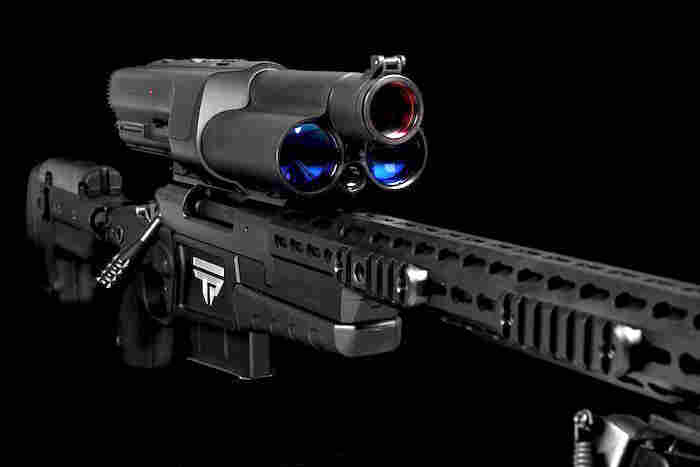 A TrackingPoint rifle features a high-tech scope that includes a laser rangefinder and a Wi-Fi server. Courtesy of TrackingPoint hide caption 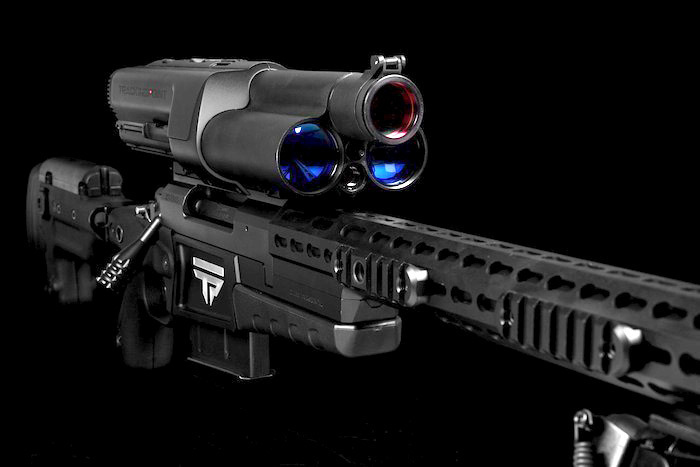 A TrackingPoint rifle features a high-tech scope that includes a laser rangefinder and a Wi-Fi server.

A new rifle goes on sale on Wednesday, and it's not like any other. It uses lasers and computers to make shooters very accurate. A startup gun company in Texas developed the rifle, which is so effective that some in the shooting community say it should not be sold to the public.

It's called the TrackingPoint rifle. On a firing range just outside Austin in the city of Liberty Hill, a novice shooter holds one and takes aim at a target 500 yards away. Normally it takes years of practice to hit something at that distance. But this shooter nails it on the first try.

The rifle's scope features a sophisticated color graphics display. The shooter locks a laser on the target by pushing a small button by the trigger. It's like a video game. But here's where it's different: You pull the trigger but the gun decides when to shoot. It fires only when the weapon has been pointed in exactly the right place, taking into account dozens of variables, including wind, shake and distance to the target.

The rifle has a built-in laser range finder, a ballistics computer and a Wi-Fi transmitter to stream live video and audio to a nearby iPad. Every shot is recorded so it can be replayed, or posted to YouTube or Facebook.

"Think of it like a smart rifle. You have a smart car; you got a smartphone; well, now we have a smart rifle," says company President Jason Schauble. He says the TrackingPoint system was built for hunters and target shooters, especially a younger generation that embraces social media.

"They like to post videos; they like to be in constant communication with groups or networks," Schauble says. "This kind of technology, in addition to making shooting more fun for them, also allows shooting to be something that they can share with others."

A team of 70 people spent three years creating the technology. Schauble says there's nothing else like it, even in the military. For civilians, TrackingPoint sells its high-end, long-range guns directly. With price tags of up to $22,000, they're not cheap. 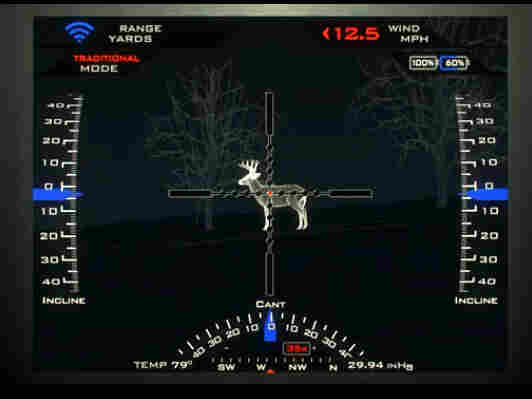 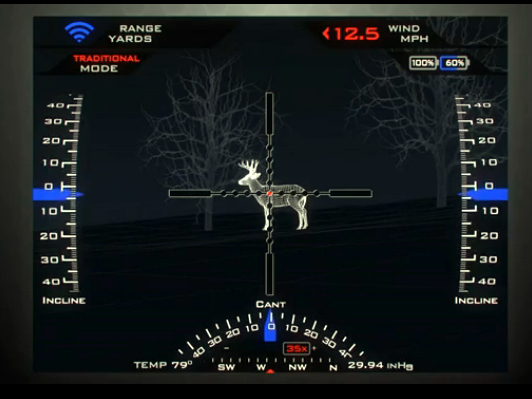 The TrackingPoint rifle's display as seen through the scope.

One hunter who doesn't want one is Chris Wilbratte. He says the TrackingPoint system undermines what he calls hunting's "fair chase."

"It's the traditional shooting fish in a barrel or the sitting duck. I mean, there's no skill in it, right? It's just you point, you let the weapon system do its thing and you pull the trigger and now you've killed a deer. There's no skill," Wilbratte says.

This new rifle is being released as the gun control debate continues to simmer in Washington.

Chris Frandsen, a West Point graduate who fought in Vietnam, doesn't believe the TrackingPoint technology should be allowed in the civilian world. The gun makes it too easy for a criminal or a terrorist to shoot people from a distance without being detected, he says.

"Where we have mental health issues, where we have children that are disassociated from society early on, when we have terrorists who have political cards to play, we have to restrict weapons that make them more efficient in terrorizing the population," Frandsen says.

Schauble says because the company sells directly — instead of going through gun dealers — it knows who its customers are and will vet them. And he says there's a key feature that prevents anyone other than the registered owner from utilizing the gun's capabilities.

"It has a password protection on the scope. When a user stores it, he can password protect the scope that takes the advanced functionality out. So the gun will still operate as a firearm itself, but you cannot do the tag/track/exact, the long range, the technology-driven precision-guided firearm piece without entering that pass code," he says.

Schauble says demand has been "overwhelming." TrackingPoint now has a waiting list. Others are interested, too: Rifle maker Remington Arms wants to use the technology in rifles it wants to sell for around $5,000.