Accessibility links
Is Virtual Reality Gaming Destined For A Comeback? : All Tech Considered At the E3 gaming conference, game developers have been tinkering with Oculus VR's new hardware. It's not ready for consumers yet, but Oculus Rift holds the promise of reviving the dream of VR. 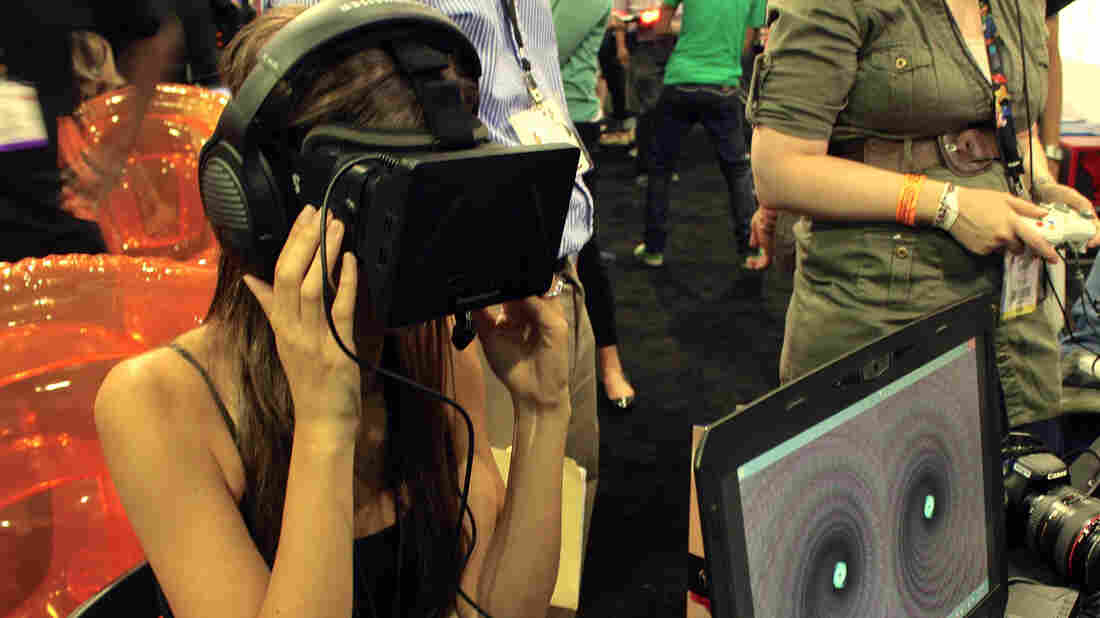 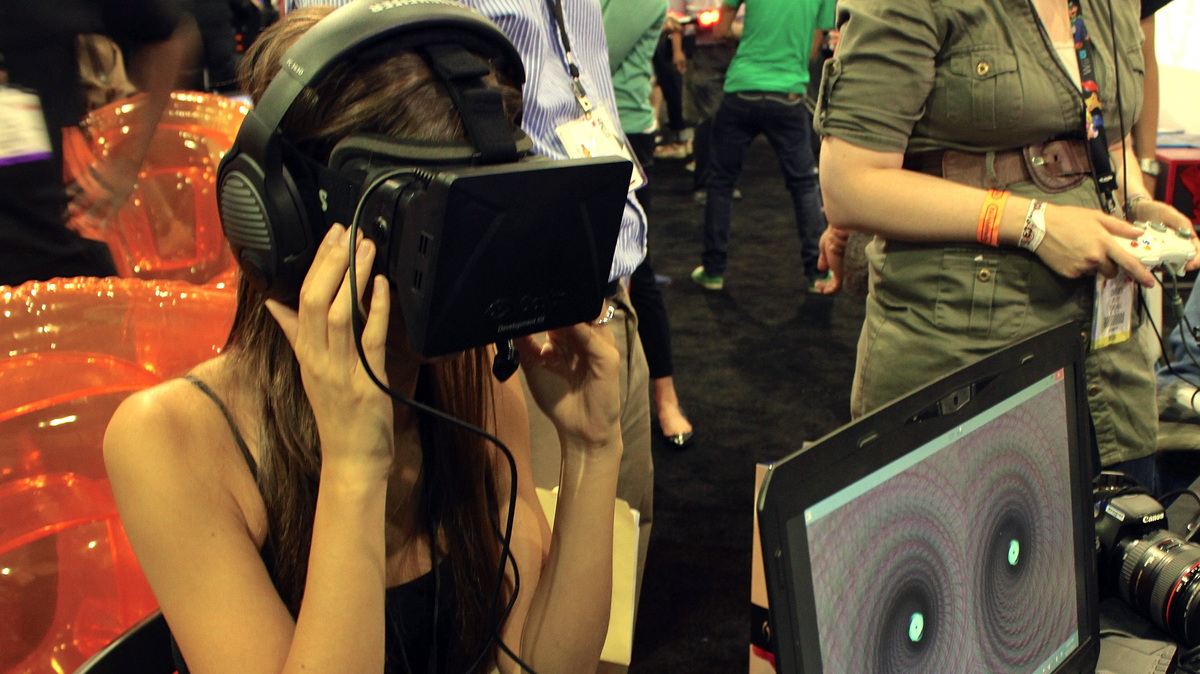 The last time most video game players were excited about virtual reality was the 1990s. Before Internet browsers were commonplace and game consoles were still actively marketed by the number of bits they could process, virtual reality held out the shimmering promise of the cyberspace envisioned by science fiction authors like William Gibson: The future was going to be accessed by way of immersive technology that would project digital avatars of ourselves into detailed virtual worlds.

The technology was excitedly talked about in techie magazines like Wired, but never quite materialized outside of arcades and college computer labs.

Instead, we all got PlayStations, Xboxes and mobile phones. That is, until this year, when a small company, Oculus VR, revived game developers' interest in virtual reality. Just a few months ago, the company began shipping prototype versions of a new breed of virtual reality headset to the people who backed its crowdfunding campaign. At E3, the annual video game conference in Los Angeles that's in full swing this week, the headset is also available on the demo floor.

Game developers of all sizes have been tinkering with Oculus VR's new hardware. Some try adapting already published computer games so they can be used with the system, and others craft entirely new games. Oculus VR gets these developers' feedback to continue improving the hardware.

As videos began surfacing online of people experiencing the Oculus Rift for the first time, the buzz grew among gamers. One game developer scratched up a guillotine simulator that puts the "player" in the role of the condemned. One of the most popular videos is of a programmer's grandmother being taken on a virtual tour of Tuscany.

Yet the YouTube videos can only tease the possibilities. The videos often show the output of the device — stereoscopic images — in a window alongside the user's reaction. The trailers for video games are always limited by their lack of interactivity, but here the barrier between seeing and experiencing is taken to an extreme.

To completely understand what the Oculus Rift is like, you have to strap it on to your head. Even if you experienced VR years ago, this is a leap forward in technology.

The headset itself is lighter than you might expect, only about as heavy as a scuba mask. Only instead of enabling underwater breathing, the Rift filled my vision with another world. The resolution isn't "retina" quality, but hold an older model iPhone two inches from your face and you'll have a sense of what looking at the Rift's screen looks like. Just imagine that it filled your peripheral vision as well.

The Rift fit snugly on my head, and with a few seconds of adjustment I was able to find the right position for the image to be in focus.

I began with a trip to the CCP Games media suite. This company makes the popular online game EVE, and members of their team whipped up a starfighter combat simulator in just a couple of months. They call it EVR, and as someone who grew up playing the classic Star Wars arcade game, this was the perfect introduction to the Rift.

With headphones on, I was effectively sealed off from the real world. Looking down, I could see "my" virtual body. The urge to raise my hands was irresistible, but the hands didn't move. There are actually ways to make this happen, just not in this game. The sense of being in — not just looking at — another world was strong, reinforced by the sound of my character's breathing.

The game itself was a fairly simple arcade-style dogfighting simulation, but my mind raced with the possibilities of what could happen if a team was able to dedicate a year or more of development to this kind of experience.

In addition to the systems being shown behind various closed doors, there are a handful of these devices on the show floor of E3. A few live at the IndieCade booth, the showcase of independent games, one of which runs a demo of indie game developer Robin Arnott's SoundSelf. The last time I played SoundSelf was as a multiplayer experience in a tool shed in Arnott's backyard. (NPR listeners may remember Arnott from a story about Austin's indie game scene.)

Arnott has adapted SoundSelf for the Rift, and it is on this format that Arnott's vision of making a game that acts as a meditation tool finds its perfect format. The two-dimensional mandala pattern found in the original version of the game is transformed by the Rift into an infinite tunnel of whirling color that responds to sustained notes intoned into a microphone.

The fixed viewpoint and bright colors of SoundSelf lay bare some of the Oculus Rift development kit's limitations. The game keeps the user's attention fixed on the virtual horizon line. After a short while you are left noticing the pixels on the screen more than the illusion they are trying to create.

Not that the version of the Oculus Rift that reaches the mass market will necessarily have that issue. During the show this week, Oculus VR announced that it's developing a high-definition version of the headset.

The Rift is still far from being something you can run down to the local electronics store and buy. Representatives of the company are not even close to discussing consumer release dates, but the very public beta phase has attracted significant interest from developers and would-be developers who are buying kits from the manufacturer.

With the price of the kits at just $300, there is a strong chance that a consumer version of the device could be competitively priced with the new generation of game consoles — themselves running from $399 to $499 — when Oculus VR finally unleashes the Rift to a wider market.

The cyberspace dreams of the '90s, it seems, are still alive.

Turnstyle News is a tech and digital culture site from Youth Radio.