Accessibility links
In More Cities, A Camera On Every Corner, Park And Sidewalk : All Tech Considered A growing number of cities are using surveillance cameras in the hope of fighting crime, but all that video is almost useless without powerful search tools to sort the material. The municipal camera trend is proving to be big business for companies that design video analytics software. 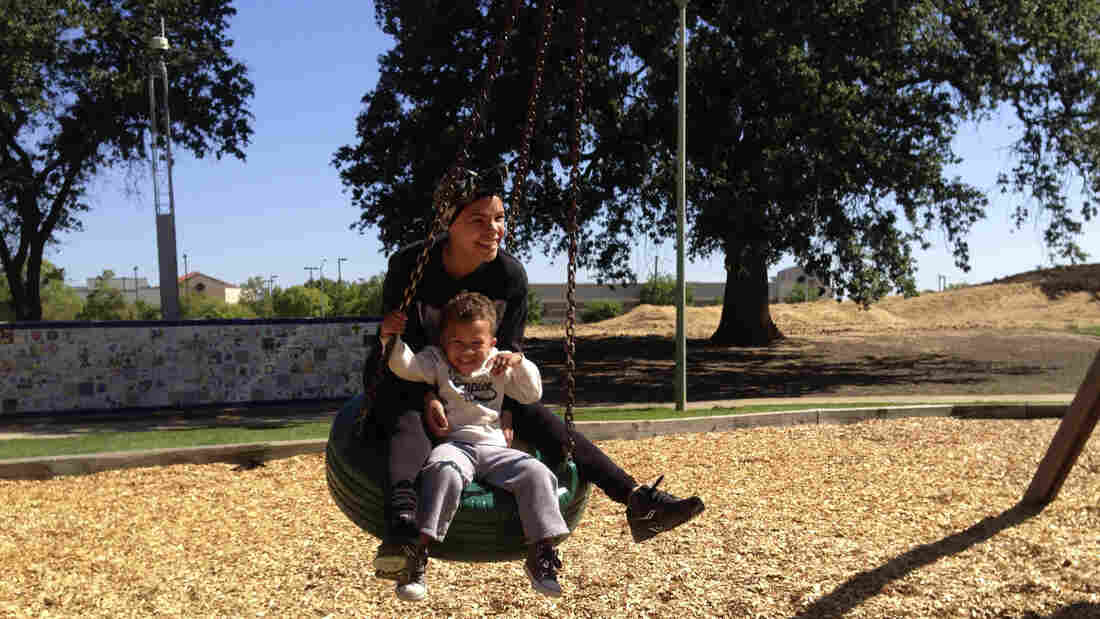 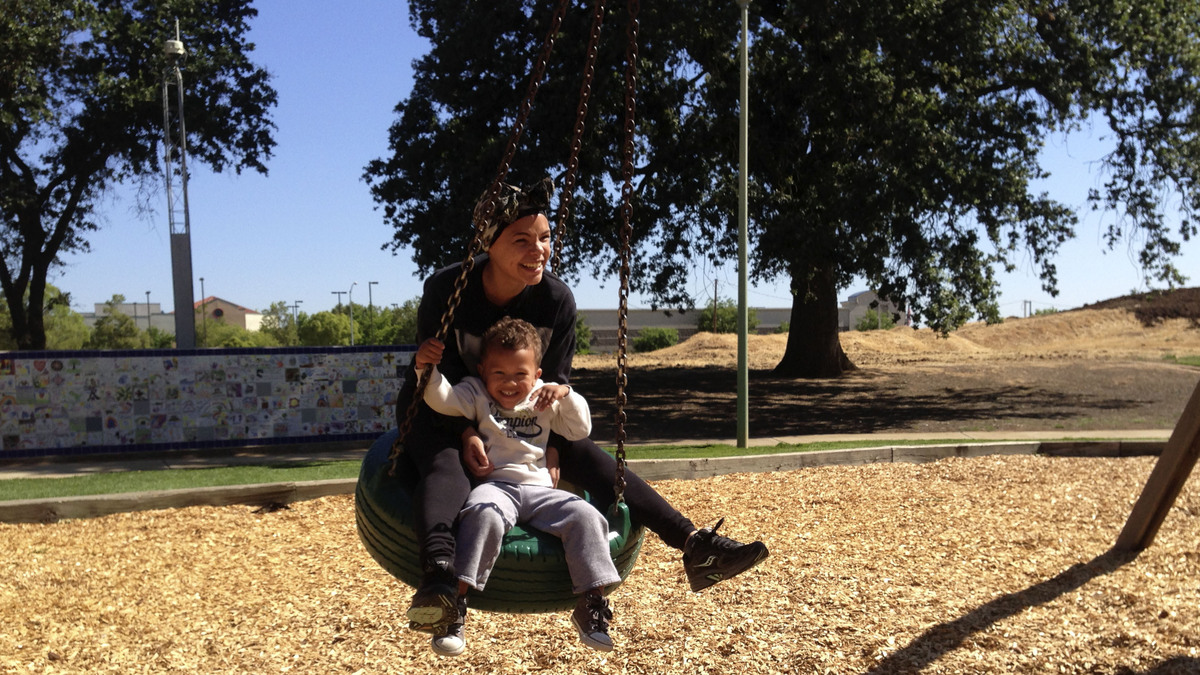 Micaela Torres and 2-year-old Jakai Johnson swing underneath a surveillance camera at Miwok Park in Elk Grove, Calif. The city's police department collects more than 100 video feeds from across the city.

This report is part of the series NPR Cities: Urban Life In The 21st Century.

Surveillance cameras, and the sophisticated software packages that go with them, have become big business. Many small- and medium-sized cities across American are spending hundreds of thousands of dollars on cameras and software to watch their residents.

These systems use some of the same kinds of technology the New York Police Department has deployed in lower Manhattan to catch terrorists. But many cities are now using the technology for policing as mundane as preventing vandalism at parks.

A case in point: Elk Grove, Calif. Elk Grove is a sleepy suburb of Sacramento with a modest crime rate. It's bordered to the south and west by wide-open ranch land. Last week I found myself sitting on a swing in Miwok Park, watching toddlers, kids and dog walkers. It couldn't have been a sleepier scene.

Nonetheless, I was being watched. There was a camera right above my head.

"I didn't even know that one was there," said Chelsea Yokkum, who was playing with her son.

Nearby, a couple was lying on a picnic blanket, snuggling. When I walked up, interrupting, they packed up to go. They said they knew there was a camera above their head, but that they had no idea what happened to the video feed. 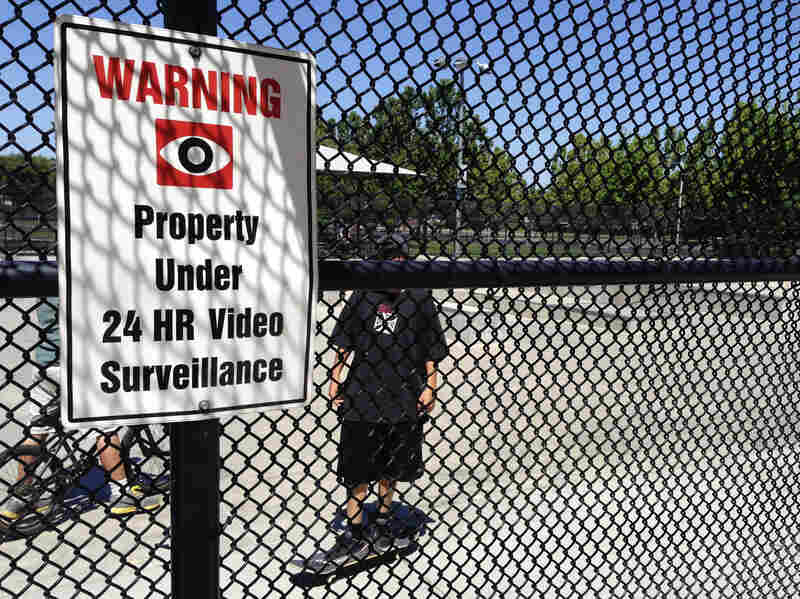 More than 30 parks in Elk Grove are under constant video surveillance, including this skate park at the city's Wackford Community Center. Steve Henn/NPR hide caption 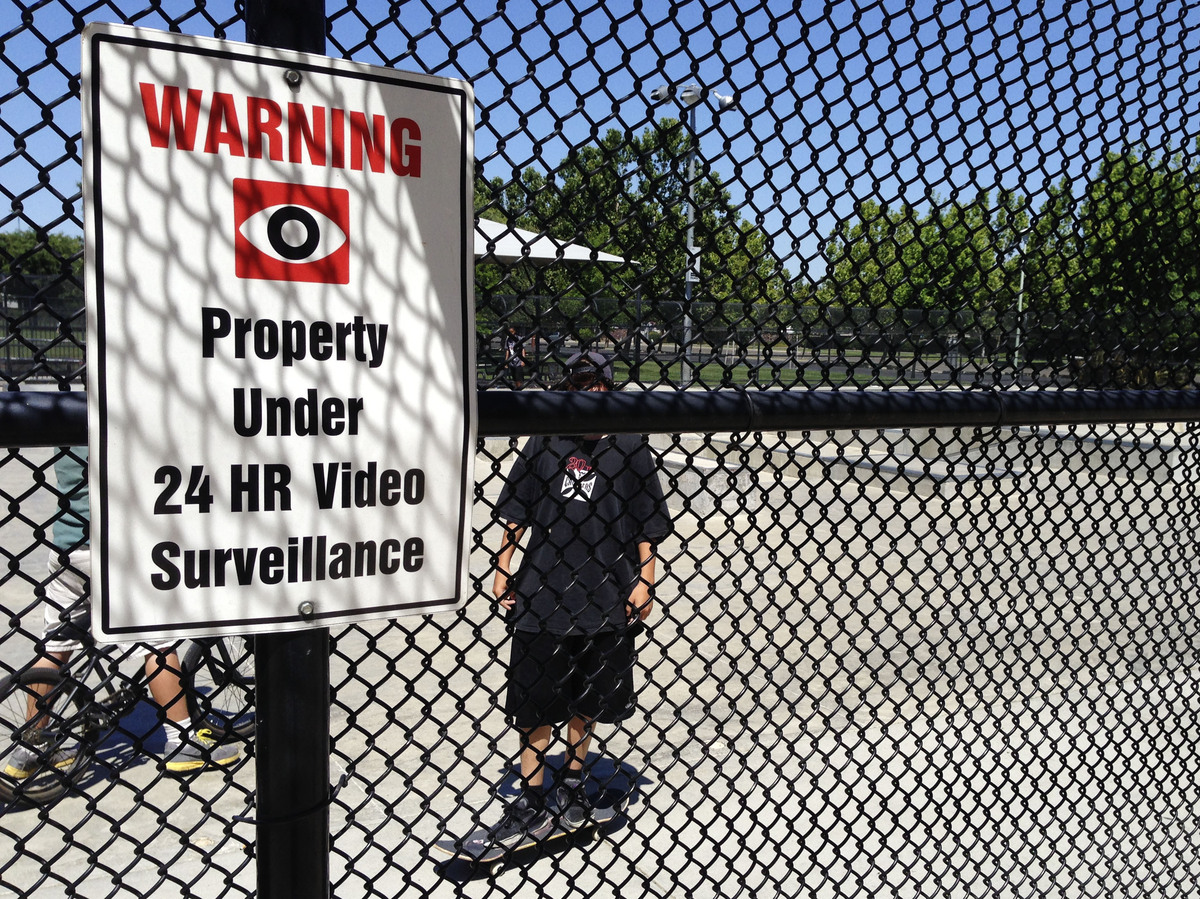 More than 30 parks in Elk Grove are under constant video surveillance, including this skate park at the city's Wackford Community Center.

It turns out it's sent directly to the Elk Grove Police Department.

"That is kind of scary in a sense," said the man, who declined to give his name. "Knowing that people are watching, no matter what." He's not alone. Many folks in Elk Grove who told me they are apprehensive about these cameras didn't want to speak on the record and didn't want to be identified.

Laura Donohue, a Georgetown University law professor who studies surveillance technology, says that kind of reaction to surveillance is common. She says proponents of cameras often argue that people with nothing to hide have nothing to fear.

The mindset, she says, is, "If you are not willing to submit to this, you must somehow be doing something that is illegal."

She adds: "I think this is simply false."

Elk Grove has invested hundreds of thousands of dollars on surveillance, and it plans to spend more.

Lawrence Park playground burned to the ground in April, the result of a suspected arson. "I'd love to add a camera to this park if we can find the budget for it," says Bob Roessler, the administrator of the parks and recreation department.

Roessler says the department has already installed more than 30 cameras in parks across the city at a cost per camera of roughly $10,000. While the parks officials install, pay for and maintain these cameras, the video is shipped directly to the police department.

Across town, Chris Hill, IT manager for the Elk Grove Police Department, is the man in charge of building this network. When I visited, he showed me how video is accessible to dispatchers and showed off a rack of servers — all devoted to collecting more than 100 video feeds from all over the city.

Hill has built a system that's flexible and scalable. More than 100 feeds are viewable and searchable from his desk. "You can get camera feeds, you can make any screens you want, you can search any video," he says.

We lean over and watch men and women streaming in and out of a gym more than two miles away. "This was a known spot in the city of Elk Grove that had a high rate of car burglaries," Hill says.

We watch a woman open up her minivan door. Hill tracks her as she gets in and drives out of the lot. Then he zooms in to read her license plate.

It would take a single officer more than four days to watch all the video recorded by the Elk Grove police in an hour — but Hill would like to get even more.

"We actually have a pilot project coming up — hopefully shortly — with a local retailer that will be giving us access to their parking lot cameras," he says. Eventually he'd also like to work with local banks to get ATM camera feeds.

But Hill doesn't want Elk Grove's officers spending time watching parking lots and writing down plate numbers. Instead, there's software that can do that for them. To see how, I traveled to the offices of 3VR in San Francisco. The company makes the software that Elk Grove uses to sift through its recordings.

"Most people don't understand that putting more cameras [up] doesn't necessarily yield more information," says Al Shipp, 3VR's CEO. The company offers facial recognition, license plate readers and object-based searches. Elk Grove doesn't use all of these services yet, but it could add new ones at any time.

"Those are search arguments you can do with our technology and literally sort through weeks of video in a few seconds," he says.

Software like this can alert the police when someone enters a park after dark. Or it can search for a face.

Diego Simkin, a technician at 3VR, shows me a search for a suspect in a possible bank fraud. He clicks and, within seconds, there are pictures of the same man walking into multiple banks on different days up on the screen.

"I have the ability to ... search against multiple cameras on that system or multiple systems," Simkin says. 3VR's corporate clients are already using these kinds of searches.

These technologies are a major draw for police in Elk Grove and departments across the country. The video analytics industry is growing by 30 percent per year and the software alone is poised to become a billion-dollar business.

"The idea that all of this information will be fed into one place, I think is a game-changer in terms of how we look at our world," says Donohue. She says that while it's reasonable to expect someone will see you lying in a public park, "you do have a reasonable expectation that nobody is going to be following you around 24 hours a day, seven days a week, everywhere you go."

Donohue worries that that's where these systems seem to be headed.