Accessibility links
At Tech-Free Camps, People Pay Hundreds To Unplug : All Tech Considered As electronic communication grows more pervasive, demand is growing for paid retreats where you have to surrender all electronic devices. One participant says giving up his phone for a weekend was "liberating"; another says she was inspired to observe tech-free Friday nights. 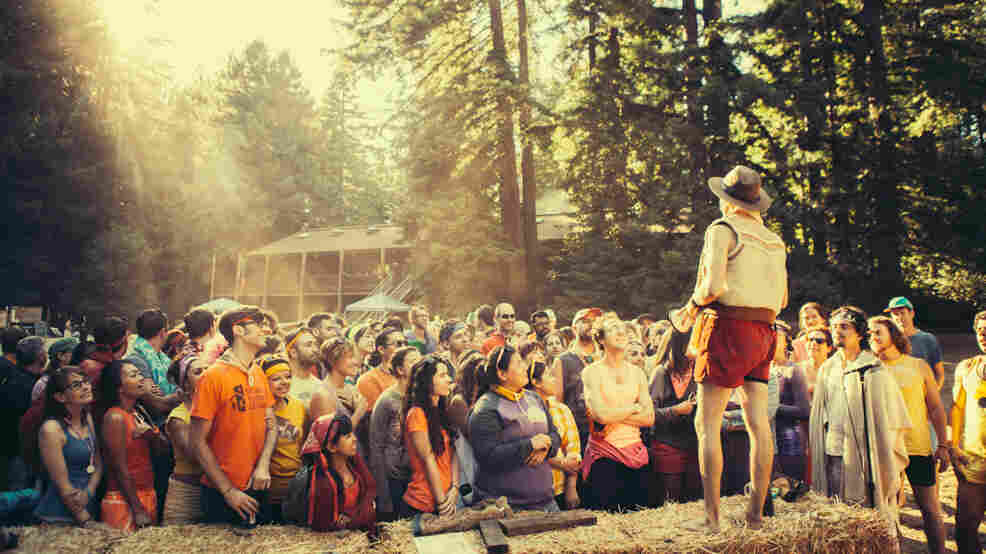 Since digital cameras aren't allowed at Camp Grounded, this is a scanned image shot by a film camera. Courtesy of Scott Sporleder hide caption 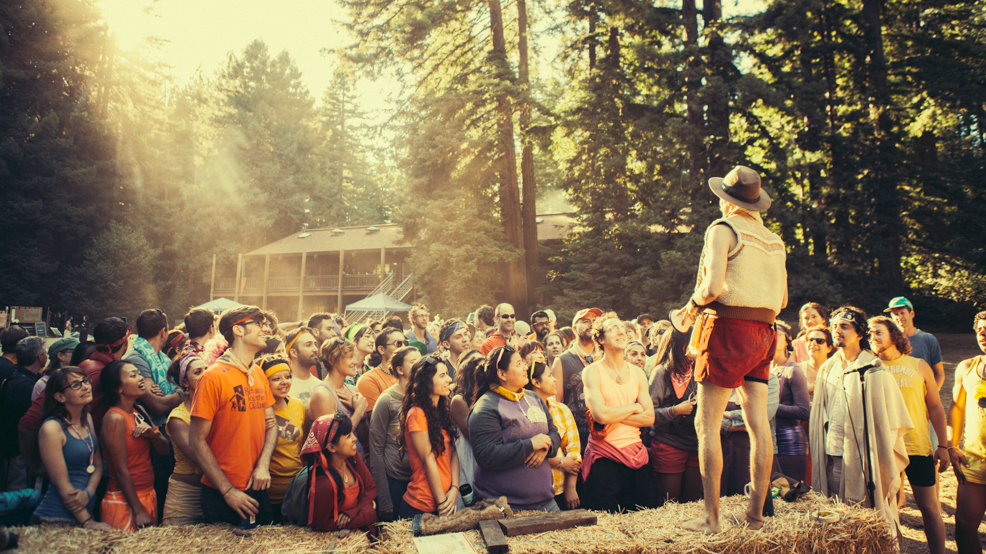 Since digital cameras aren't allowed at Camp Grounded, this is a scanned image shot by a film camera.

The overwhelming and endless stream of electronic alerts and messages on our computers, phones and tablets is driving demand for a new kind of summer camp for adults. "Technology-free" camps that force their campers to surrender their gadgets, wallets and that nagging "fear of missing out" — FOMO — are booking up fast.

In June, Digital Detox held its first session of Camp Grounded, a three-day break from electronic devices in the Redwoods of Northern California. At a price tag of $350, the event sold out.

"You read articles about being present and being in the moment, and you kind of nod your head and you agree. But I don't think you know what that means until you put everything away and you're OK with where you are," says Anastasia Savvina, who attended the June camp.

Tech-free getaway options like this are growing. Hotels like the Lake Placid Lodge in New York and Hotel Monaco Chicago are offering digital detox or "black-out" services. The Check-In to Check-Out package at the Lake Placid Lodge invites guests to leave their electronic devices at the front desk and to immerse themselves in "the serenity of the Adirondacks."

Digital Detox co-founder Levi Felix attributes the high demand for tech-free retreats to a growing awareness of the pervasiveness of technology in our everyday lives. "People are feeling like something's not right here," he says. 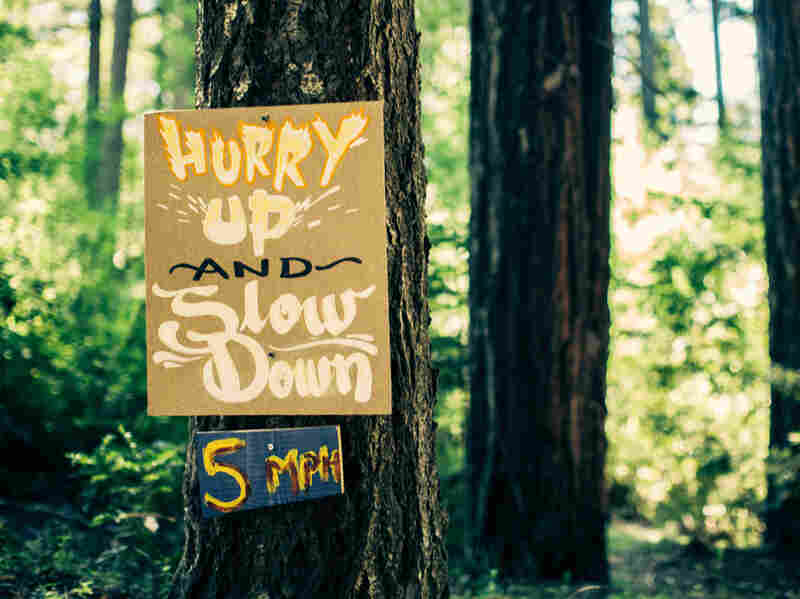 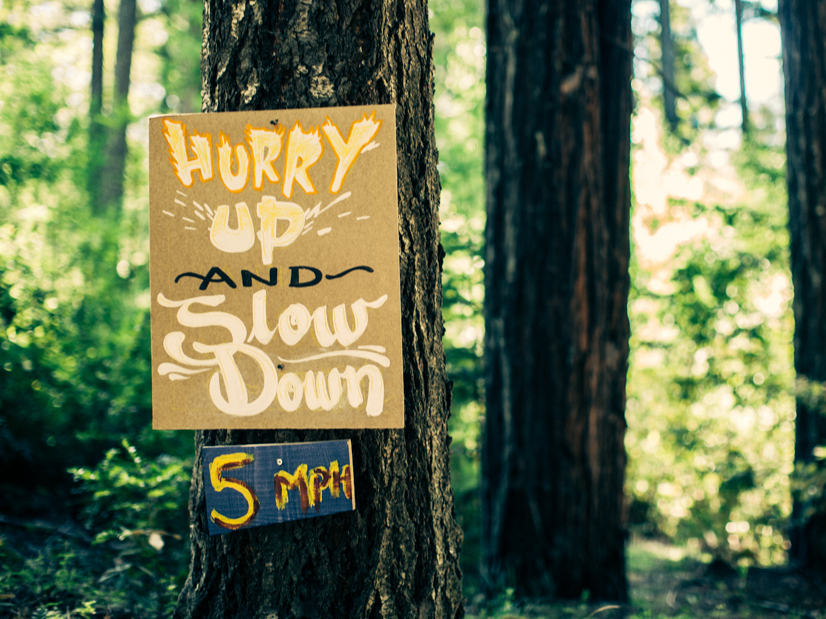 With no iPhones or computers to distract them, campers at Camp Grounded participated in "playshops," featuring yoga, laughing contests and writing sessions.

But for many of the participants, the most exciting activity was conversation. Campers adopted nicknames like "Chamomile" and "Nash," and were barred from talking about work or disclosing their age. Nicholas Freilich says that not being able to discuss work or even reveal their actual names allowed everyone to quickly understand each other on a more personal level.

"You had to talk about who you were as a person," he explains. And no one could "check out" by looking down at his or her phone midway through a conversation. "People were so much more willing to engage in eye contact," Freilich says.

Derek Overbey, the senior social media manager at an online software company in San Francisco, says he normally spends 12 to 14 hours a day in front of a screen. Giving up his phone for the weekend was "liberating," Overbey says.

Other participants say they were initially disoriented by the lack of texts and tweets. "I was having a lot of phantom rings on my leg, thinking I was getting a phone call or message," says camper Chris Heuer.

But by the end of the weekend, they say the experience gave them a new perspective on their relationships with technology and social media. Savvina has since decided to begin observing tech-free Friday nights. She stops using her computer after work and reserves her phone "only for family calls or emergencies."

Felix says that life off the grid is not the end goal of the retreat. "It's not about not using [technology]. It's about being in control of using it," he says. "It's all about what you do when the devices are gone."

Why pay to unplug when you can just leave your phone in a drawer? Campers say handing over devices to the counselors served as a kind of guarantee that they could finally relax. "It's very hard to put your phone away knowing that you can always pick it up," Savvina says.

"You don't have to pay money [to disconnect]," Felix says. But he says that people who try to digital detox on their own are likely to feel the pressure to just pick up their phones and interact with people online.

Campers say they had a great time, but they don't have a digital record of it. Cameras were also surrendered when campers showed up.

Raphaella Baek is an intern on NPR's business desk.