Accessibility links
When Social Sharing Goes Wrong: Regretting The Facebook Post : All Tech Considered Researchers explored the many ways what we say on Facebook get us in trouble and how offline and online regret aren't the same. Users often don't remember or know who might see their Facebook content until it's too late. 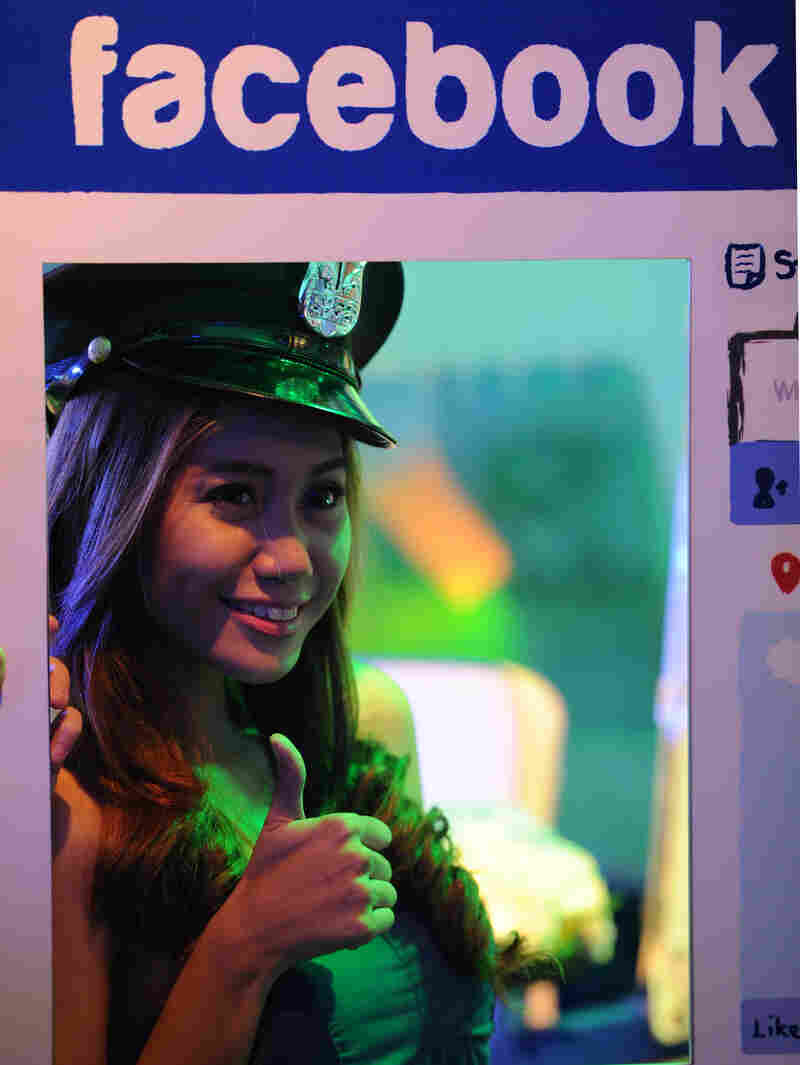 A model poses for photos next to a life-size makeshift Facebook browser in the Philippines. Ted Aljibe/AFP/Getty Images hide caption 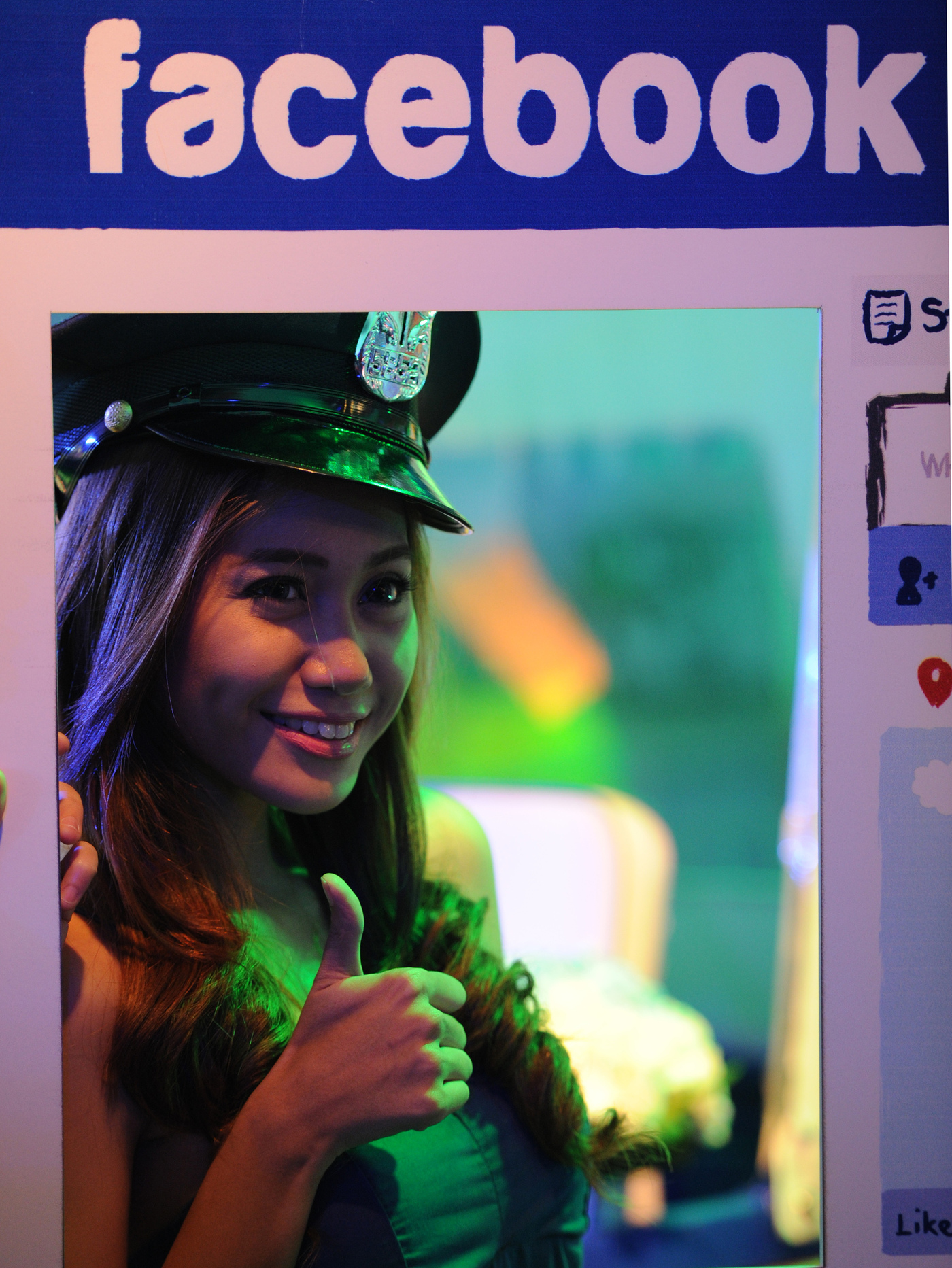 A model poses for photos next to a life-size makeshift Facebook browser in the Philippines.

We've been following the case of Justin Carter, the Texas teen who's been jailed near San Antonio since February. It started when he posted a Facebook message saying he would go "shoot up a kindergarten." Austin Police arrested him and seized his computer and a grand jury indicted him in April on a charge of making a terroristic threat. Because a judge set bail at $500,000, the 19-year-old can't get out to await trial.

"He's really sorry," said Jack Carter, Justin's father. "He just got caught up in the moment ... and didn't think about the implications."

While Carter's example is extreme and, as police contend, illegal, he isn't alone in posting something on social media and later feeling deep regret. The relationship was the focus of a 2011 study called "I Regretted the Minute I Pressed Share," by researchers at Carnegie Mellon University. The Carter case presents a timely opportunity to revisit what the researchers found:

The types of posts people regret won't surprise you.

This part probably didn't require an academic study, but research confirms that the most common Facebook regrets revolve around sensitive topics like alcohol, sex, politics, religion or "emotional content." That includes posts about relationships, with profanity and/or negative comments. (The study's title came from a respondent who posted a regrettable negative thought about a job interview.)

"We also heard several reports in which users' social-networking site content ended up in the hands of judges and prosecutors," researchers write. It's a situation Justin Carter knows well.

Sometimes users expect a negative consequence but underestimate its severity. Study participants used examples like posting and tagging photos of friends in states of inebriation, or posting messages or jokes that were racist or sexist, which in some cases led to professional ramifications.

"Relatively new Facebook users tend to have problems understanding the Facebook platform, and experienced users can still be caught by surprise," the Carnegie Mellon researchers wrote.

"One survey respondent said, 'I accidentally posted a video of my husband and I having sex . . . I didn't mean to post it, I had accidentally clicked on the video of my daughter taking her first steps and on that video and they both uploaded together ... I didn't know I had posted it until the day after, when I logged on again, and saw all the comments from all of our friends and family, and my [husband's] coworkers (he's in the Army).' "

In this case, the posting was an accident, but some users don't understand how their identities are connected with their activity, or just forget to update privacy settings on content. The process of setting up various privacy controls can be cumbersome — and confusing — which only heightens the risk when posting.

Our human tendency to "perform" on social media can lead to regret.

Social media lends all users a "public" persona, and when users try to present themselves in a way that matches how they want to be seen, this can lead to trouble. Part of the problem is that the norms of one community aren't the norms of another. So when we produce one version of ourselves for one context — say, our family — but behave quite differently in the workplace, the frameworks can clash on social media. The researchers wrote:

"A teacher holding alcohol in a school or public context may conﬂict with its social norms, whereas the same person holding alcohol in a bar during her vacation seems reasonable with the social norms of that circumstance. The problem is that sites like Facebook are becoming what [social media scholar Danah Boyd calls 'networked publics'] — public places on the Internet, where different conﬂicting contexts and social norms coexist."

Online regret isn't the same as offline, or "real-world" regret.

A main cause of Facebook regret is when your posting reaches people you didn't intend it to because Facebook privacy settings can be confusing or you assume a smaller number of people will see your message than actually do. This doesn't happen as often with real-world regrets.

But the nature of online and offline regret is also quite different. Evidence from real-world-regret literature (yes, there are many studies in this area) show that what we regret in real life tends to be what we don't do — we regret inaction because of the fear of negative outcomes. For example, when we regret not telling people how we really feel about them.

But research indicates that Facebook users regret their action instead of inaction, "in which the impulsiveness of sharing or posting on Facebook may blind users to the negative outcomes of posts even if the outcome is immediate," the Carnegie Mellon researchers wrote.

Research around this area is growing as notions of privacy, surveillance and our online and offline identities continue to evolve. This particular research team wants to know whether certain kinds of users are more likely to take regrettable actions on Facebook, and if so, what are their characteristics? They ask other questions, like what is the long-term effect of regrets on users' subsequent behavior on Facebook?

As we've recently seen, in the extreme cases, long-term effects of regrettable posts can last a lifetime.