Accessibility links
Arrest Caught On Google Glass Reignites Privacy Debate : All Tech Considered The wearable technology, which is being tested by a select group of users, was used to record an arrest on the Jersey Shore. The incident raises questions about citizen journalism and the limits of privacy in public. 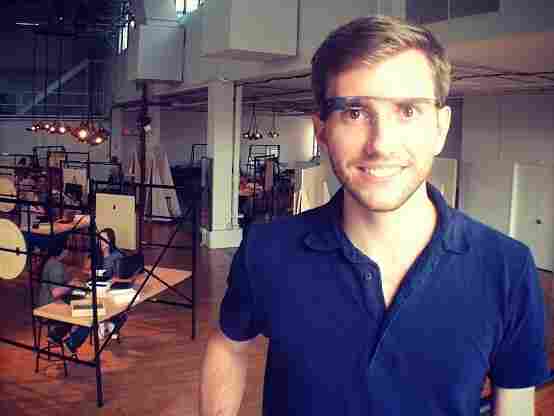 Filmmaker Chris Barrett wearing his Google Glass. He is among the first 1,000 nondeveloper testers of the product. Jennifer Rubinovitz/Courtesy of Chris Barrett hide caption 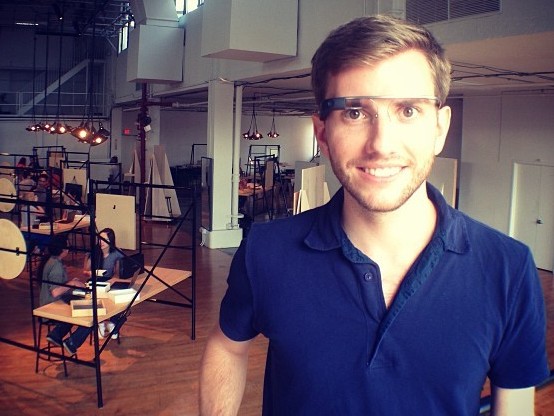 Filmmaker Chris Barrett wearing his Google Glass. He is among the first 1,000 nondeveloper testers of the product.

The Fourth of July holiday brought about another first for Google Glass, the computing device that you can wear on your face.

Chris Barrett, a documentary filmmaker and founder of PRServe.com, was wearing Glass for a fireworks show in Wildwood, N.J., when he happened upon a boardwalk brawl and subsequent arrest. He and the technology community that has been tracking notable Google Glass moments believe he recorded the first public arrest caught on the Glass' built-in camera.

"This video is proof that Google Glass will change citizen journalism forever," Barrett wrote on his YouTube page. While all citizen journalists armed with a camera or a smartphone could capture similar video, Barrett told VentureBeat that the fact the glasses were relatively unnoticeable made a big difference:

"I think if I had a bigger camera there, the kid would probably have punched me," Barrett told me. "But I was able to capture the action with Glass and I didn't have to hold up a cell phone and press record."

Barrett is among the first 1,000 people to get Google Glass and says this is the first arrest caught by the Glass camera.

Barrett added today that the hands-free aspect of using Glass to record a scene made a big difference.

"What is interesting with Glass is that in tense situations, like, say, war reporting, your hands are free while you're shooting. You can use your hands to protect yourself. If I wanted to back away, I could do it without dropping my camera or stopping the recording. That's a big step in wearable computing," Barrett told NPR.

But others worry about the implications. Christophe Gevrey, the global head of editorial solutions for Thomson Reuters, wrote this on his blog:

The video capability of Google Glass is raising the most concern of regulators. As The Washington Post reports:

Google Fights Glass Backlash Before It Even Hits The Street

"In May, the House Bipartisan Privacy Caucus wrote Google a letter, asking for more information about how Google Glass will work within the company's privacy standards. Last month, 10 privacy regulators from around the world, including Canada, Australia and a European Commission panel, asked Google for more information on how the company's headset complies with their data protection laws and what data it collects."

Google responded on June 7, saying that it won't be changing its privacy policy to deal with Glass-specific concerns but that it is "thinking carefully" about the feedback it's getting from lawmakers.

What do you think? Is Google Glass an exciting new front in citizen journalism or is it making it too easy for citizen snooping? Tweet at us @NPRAllTech or we can chat in the comments.