Accessibility links
Police May Know Exactly Where You Were Last Tuesday : All Tech Considered Police have scanned millions of license plates around the country and can save the data on vehicle locations for later use. It's a helpful tool for policing, but critics say it's a threat to privacy. 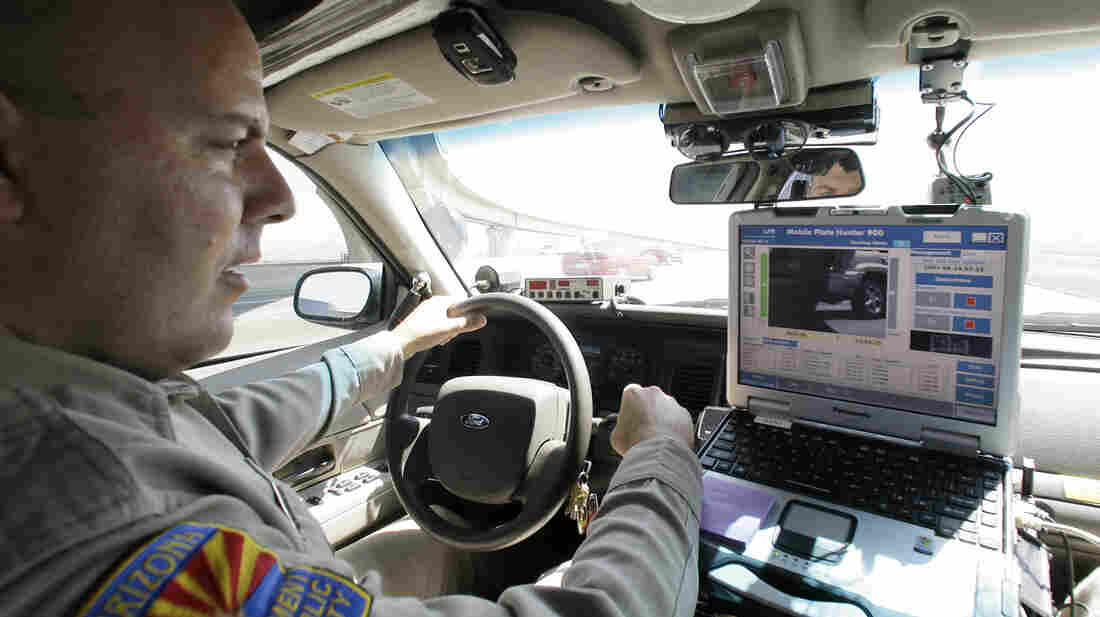 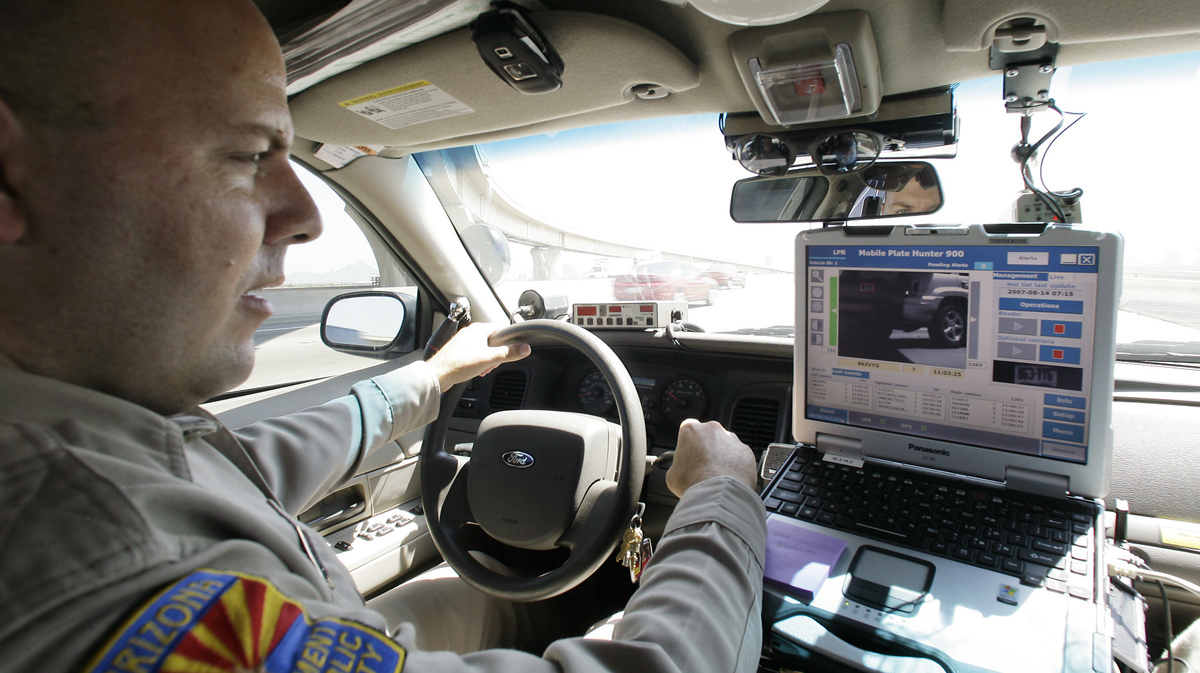 An Arizona Department of Public Safety officer keeps an eye on his dashboard computer as it reads passing car license plates.

License plate scanners are the dark horse of the surveillance world. They've been around for a decade, but people rarely notice. They don't look much different from closed circuit cameras, perched over busy intersections. Or they're just another device mounted on a passing police car.

But they notice you: A scanner can ID thousands of plates a day. And a new ACLU report says the vast majority of police agencies now use them.

The report's chief author, Catherine Crump, says her organization isn't opposed to the technology per se.

"At first, we didn't think it posed much of a privacy problem," Crump said. The ACLU saw a system that triggered a real-time alert to the presence of a stolen vehicle, or a car linked to a fugitive, and that seemed acceptable. But then the group realized police were storing the license plate scans — whether or not there had been a "hit."

The ACLU's public records requests show some departments have accumulated millions of scans, and the agencies store the data for years — even indefinitely. The scans are also being shared across departments, and with the federal government.

Privacy hawks worry that this has the makings to become a powerful search engine of past traffic. The more ubiquitous the scanners become, the easier it'll be to verify where you've driven over the past years. The databases can place your car in a city you claim you've never visited, or in front of the house of a person you claim not to know.

"Having all this information, sitting in a database, I think could be quite chilling," Crump says.

But police see things differently. These plate-scan databases are a potential gold mine for detectives who might have nothing else to go on. A quick dip into a list of plates scanned near the crime scene might produce that precious first step: a name.

"It's another tool in our belt," says Sgt. Robert Eberling, who's with the police department in Grapevine, Texas. It's a midsized suburb of Dallas, but the ACLU's records show that, as of August 2012, it had collected and stored 2 million plate scans.

Eberling says that number is inflated by the fact that the department uses the scanners in the parking lots of a big shopping mall, where stolen cars are often abandoned. He says the scanners are very useful for recovering those vehicles. But he concedes the resulting database may also come in handy down the road.

"God forbid if the day came that a child is abducted from that mall," he says. "We would have that tool available to us, to look at that data and see if we can't find a possible suspect vehicle."

Eberling says the police department is in the process of coming up with new rules for how long to keep the data. Texas doesn't impose any limit on how long police can keep the scans, but as the technology spreads, a couple of states have stepped in. Arkansas and Maine bar police from storing scans not linked to crimes, and the Minnesota State Patrol deletes records after two days.

Want to know how long your local police save the scans? Check the ACLU map. The organization filed public document requests with nearly 600 police agencies, and heard back from 300. If your local police responded, you can read what they said about their scanners.