Accessibility links
Special Ops Envisions 'Iron Man'-Like Suit To Protect Troops : All Tech Considered The Special Operations Command, which runs the Green Berets and Navy SEALs, is teaming up with scientists and engineers to build a suit with more protection, a wearable antenna and computers that monitor wounds. They hope to have working prototypes within a few years. 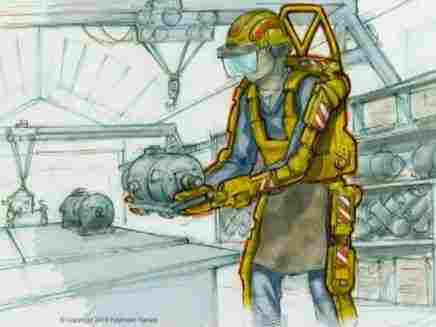 Concept art of the suit the Special Operations Command is trying to build. Raytheon via YouTube hide caption 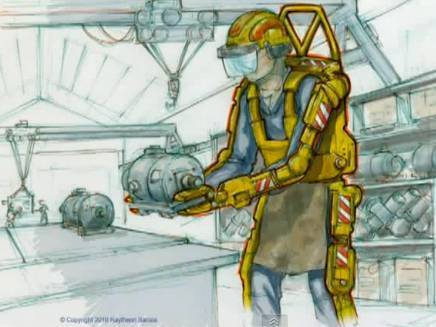 Concept art of the suit the Special Operations Command is trying to build.

In the Iron Man movie series, Robert Downey Jr. plays a billionaire working with his trusty robot to build a protective suit that will help him battle evil.

Now, the U.S. Special Operations Command is teaming up with industry, universities and laboratories to see if such a suit can be created for the real world of combat.

Adm. Bill McRaven, who unveiled the idea at a conference in May, says it was inspired by the death of one of his troops in Afghanistan.

"One of our folks going through the door was killed by the Taliban on the other side in an attempt to rescue a hostage," McRaven, the command's top officer, says.

So McRaven challenged those at the conference to come up with better body armor. And he posed this question: "Why haven't we put effort into ensuring particularly that guy going through the door ... is protected to the maximum capability that we can provide him, as a nation?"

That effort is now underway. The Special Operations Command held something of a science fair last month in Tampa, says Jim Geurts, who buys high-tech equipment for the command. At the conference, dozens of technologies were shown off, he says, including "advanced body armor, advance power supply, practical exoskeletons ... [and] different display technologies."

It's all just a concept now, Geurts says. But it's a concept with a name: TALOS, short for tactical assault light operator suit. It will take a year to even select which technologies to use.

So, a flying suit is not part of the plan. But the first challenge is to come up with stronger body armor so a commando can survive once he kicks in a door.

Norman Wagner, a professor of chemical engineering at the University of Delaware, is working the problem. He's looking to nanotechnology to create a solution that contains particles smaller than a single red blood cell.

"We're starting with the material that's almost a liquid ceramic," he says.

A liquid that can be dipped in Kevlar fabric — the current building block of body armor and helmets — and make it even tougher, literally the moment a bullet strikes.

"It transitions when you hit it hard," Wagner says. "These particles organize themselves quickly, locally in a way that they can't flow anymore and they become like a solid."

So a liquid becomes a solid to make better armor protection. But the military wants to do more. It wants to make the soldier faster and stronger.

Gareth McKinley, a professor at MIT, works on liquid armor, among other things. He says the suit could include attachable frames on the arms and legs that use hydraulics to greatly increase strength and speed.

"They typically consist of an external skeleton that's attached or bolted onto the human's either upper torso or lower torso," McKinley says.

"It sounds exactly like Iron Man," McKinley says. "The other kind of things that you see in the movies I think that would be more realistic at the moment would be the kind of external suit that Sigourney Weaver wears in Aliens, where it's a large robot that amplifies the motions and lifting capability of a human."

Another function: The commandos need a more complete picture of the battlefield.

So, the suit will likely include a wearable computer, like Google Glass, says Geurts of the Special Operations Command. Instead of a handheld display, commandos could simply look into the corner of their glasses and get updates on things like the location of enemy forces.

But, Geurts cautions people not to expect any of this anytime soon,

"The hope is that we would have some working full-up prototypes in the two- to three-year time frame," he says.

In the meantime, that kind of suit can only be seen at a theater near you.