Accessibility links
Amazon Enters Art World; Galleries Say They Aren't Worried : All Tech Considered Will the local gallery go the way of the local bookstore or record store? In the past few years, there's been a growth in sites that sell fine art on the Internet. On Tuesday, Amazon joined that market. 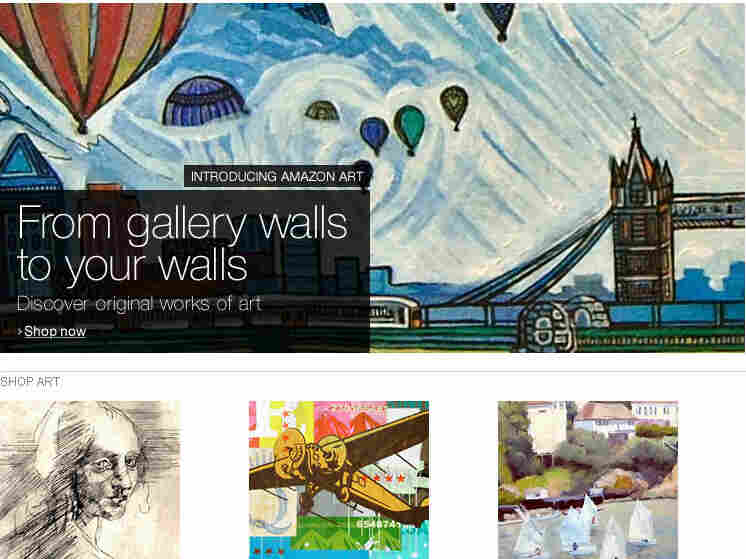 Amazon said its new art marketplace will provide access to more than 40,000 works of art from at least 150 galleries and dealers. Amazon.com hide caption 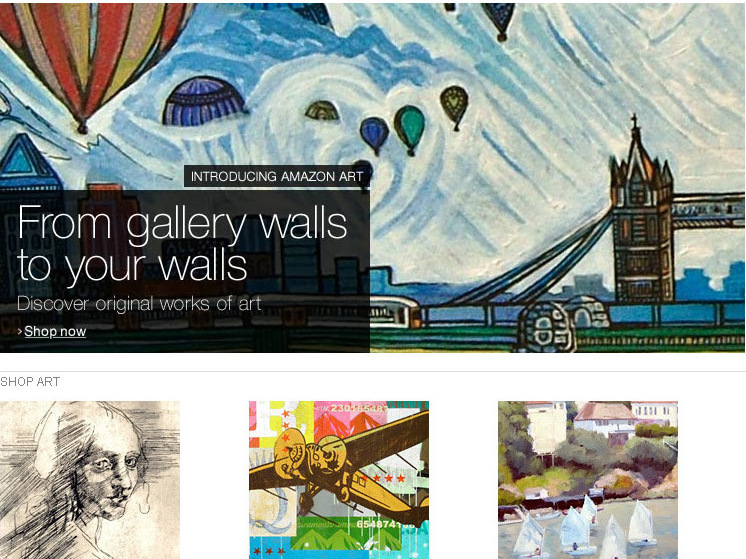 Amazon said its new art marketplace will provide access to more than 40,000 works of art from at least 150 galleries and dealers.

Local record and book shops have been disappearing as the market for music and literature moves online. In the past few years, there's been a growth in sites that sell fine art on the Internet. On Tuesday, Amazon joined that market. But in this case, many brick and mortar galleries aren't seeing the Internet as a threat.

Modernbook Gallery in San Francisco currently has 11 very large eerie photos of a fair-skinned woman in a white-lace dress donning its walls. In one photo, the woman sits in a chair and feeds milk to a TV. In another, the top half of her head is replaced by a bird cage.

The artist's name is Jamie Baldridge. Gallery manager Danny Sanchez says the work was inspired by Baldridge's childhood and "afternoons reading fairy tales for their dark nature. So you kind of get a little bit of that in his imagery."

It's especially exciting to Sanchez that art collectors are able to look at and buy these creative photos online.

"It'll be another outlet for us to showcase our artists and get that wider range of people who are looking for art that would normally not come across into our building," he says.

And Sanchez was eager to partner with Amazon. "They redefined online shopping, and I think they have the ability to do that for this new kind of marketplace for art," he says.

The audience for visual art is there, says Peter Faricy, vice president of Amazon Marketplace, which is overseeing the launch. Faricy says the company was getting customer requests to put art on Amazon.

"We know our customers love fine art and want ways to discover more of it. And so this really gives them a way to discover artists far beyond their geography," he says.

The new Amazon fine art site includes galleries in New York, Miami, Great Britain, the Netherlands and Canada. Faricy said Amazon's got more than 150 galleries and dealers signed up with work from more than 4,500 artists.

Faricy says the company has tried hard to make the site easy to use and appropriate for looking at fine art. "All of the images we're using for the artwork are high definition. They're all able to be looked at in more detail," he adds.

Amazon isn't the first business to bring fine art online. In the late 1990s, Eyestorm set up shop from London. More recently Artsy and ArtSpace have made deals with major museums and galleries to sell works by art stars like Sol LeWitt and Cindy Sherman.

But David Ross, the former director of both the San Francisco Museum of Art and the Whitney Museum in New York, says Amazon's entrance into the market is a much bigger deal because some 100 million people already shop at the site.

"My old maxim is people only order what's on the menu. Now that art is on this menu, and the Amazon menu is probably one of the prime menus in the world today for people who have disposable income, now that will become an option, whether it's for a gift or for the home or whatever," Ross says.

On Amazon, you can buy a Monet, a Warhol or a Norman Rockwell for close to $5 million. But most of the works range in price from $100 to $5,000. And many of the galleries that have signed up are not high end.

Amazon got in touch with Patricia Bransten, the director of Rena Bransten — one of San Francisco's highly respected galleries. She did not sign up with Amazon. She says the person who talked to her knew more about selling wine than art.

"They're not going to get it. They don't have enough, in my opinion, to actually get the art business, both to understand it and to get the physical, the inventory," she says.

Bransten does sell work online; her artists have been on ArtSpace and Artsy, which she thinks are better educated about the market. Still, Bransten says she's hardly sold any work online. And she worries that Amazon's entry into the business will reinforce the big names and marginalize lesser-known artists.

She says that unlike books or wine, people like to look at art in person before they buy it.