Accessibility links
Teens Use Twitter To Thumb Rides : All Tech Considered Need a ride to the party or the concert? Instead of making endless phone calls, these days teens turn to social media to arrange transportation. It's called ridesharing, a form of cyber-hitchhiking used by a generation that isn't rushing to get a driver's license or dream car. 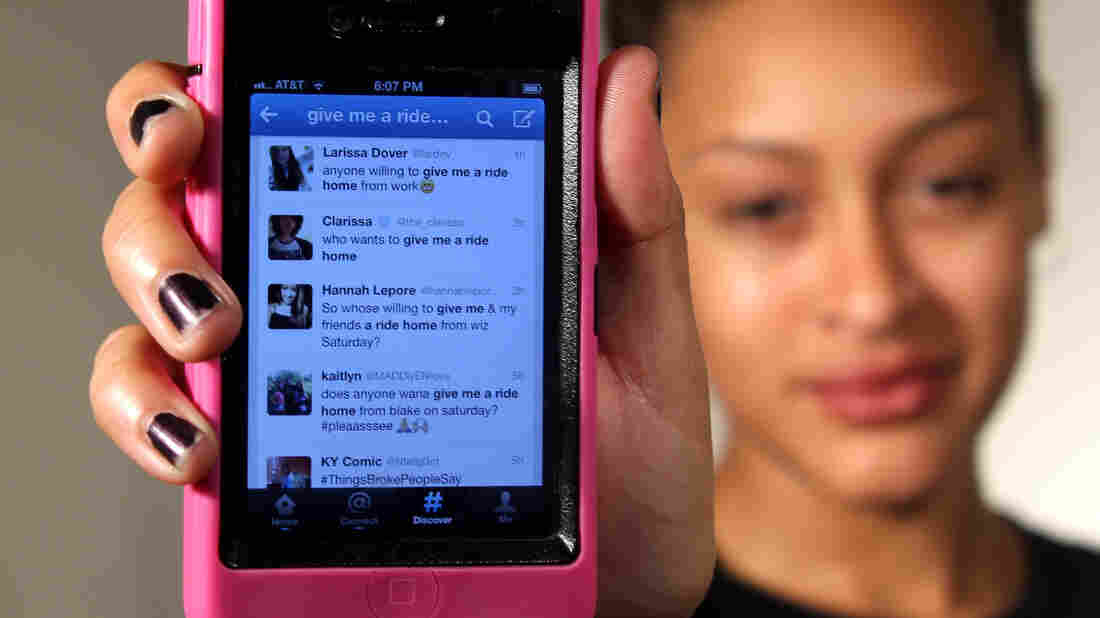 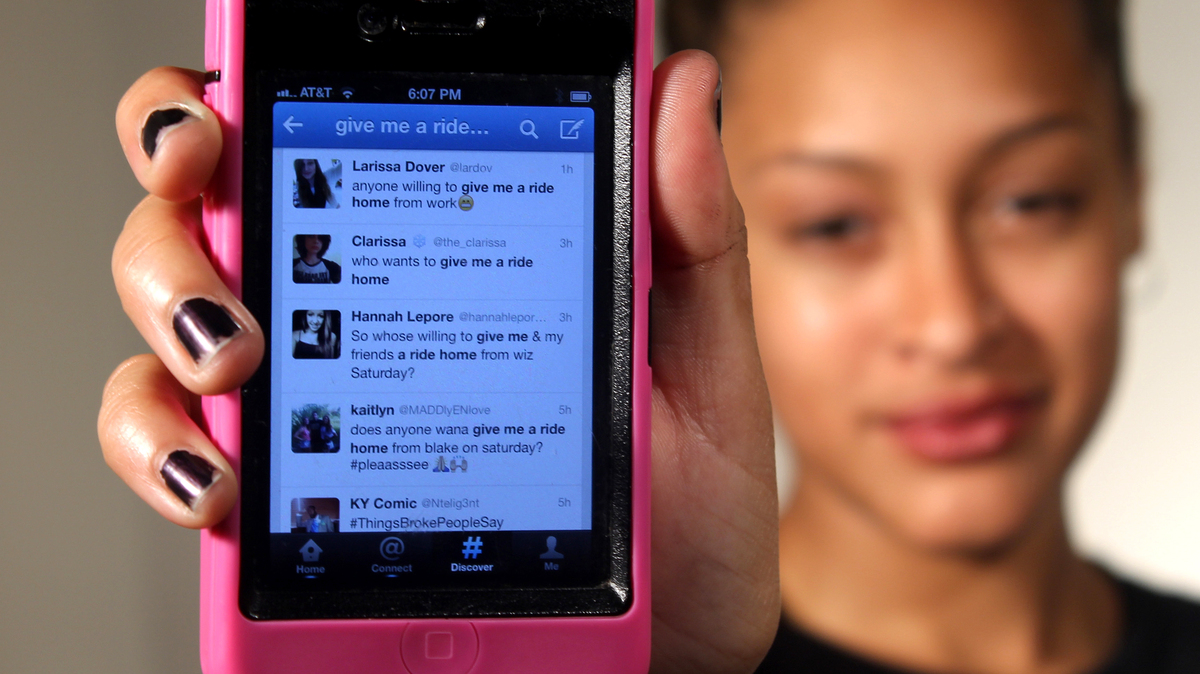 Teenagers turn to their phones and social media to find rides.

"A Super Beetle, silver, with red and black racing stripes and a sunroof with a cassette AM/FM in the dash," she says. "You really couldn't tell me much after that."

My mom grew up in the height of American car culture, a time when the way you expressed who you were was by what you drove. And car-themed songs were No. 1 on Billboard.

"Cars back then meant freedom. And being raised in the San Francisco Bay Area and in the '70s when there weren't many boundaries on anything — and I really mean no boundaries as far as sex, drugs and rock 'n' roll — cars were just the biggest tool you had to exercise your freedom to go," she says.

Maybe it's because I've never owned one, but to me, cars have always simply been something to get me from point A to B. I take cars for what they are — transportation — and whenever I try to imagine my "dream car," I draw a blank. Then, I reach for my phone, because I get my rides through Twitter and Facebook — just like my friend Earl Barkley in Atlanta. 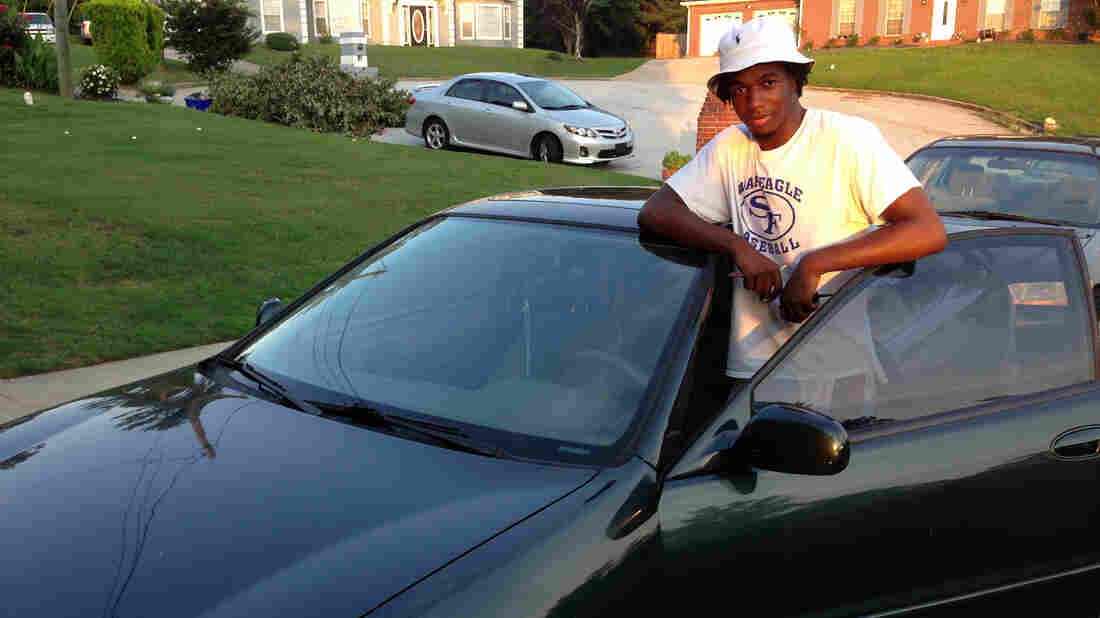 Earl Barkley, who recently got a car, looks for rides to school via Twitter and also gives rides when friends hit him up on social media. Clay Bolton/Youth Radio hide caption 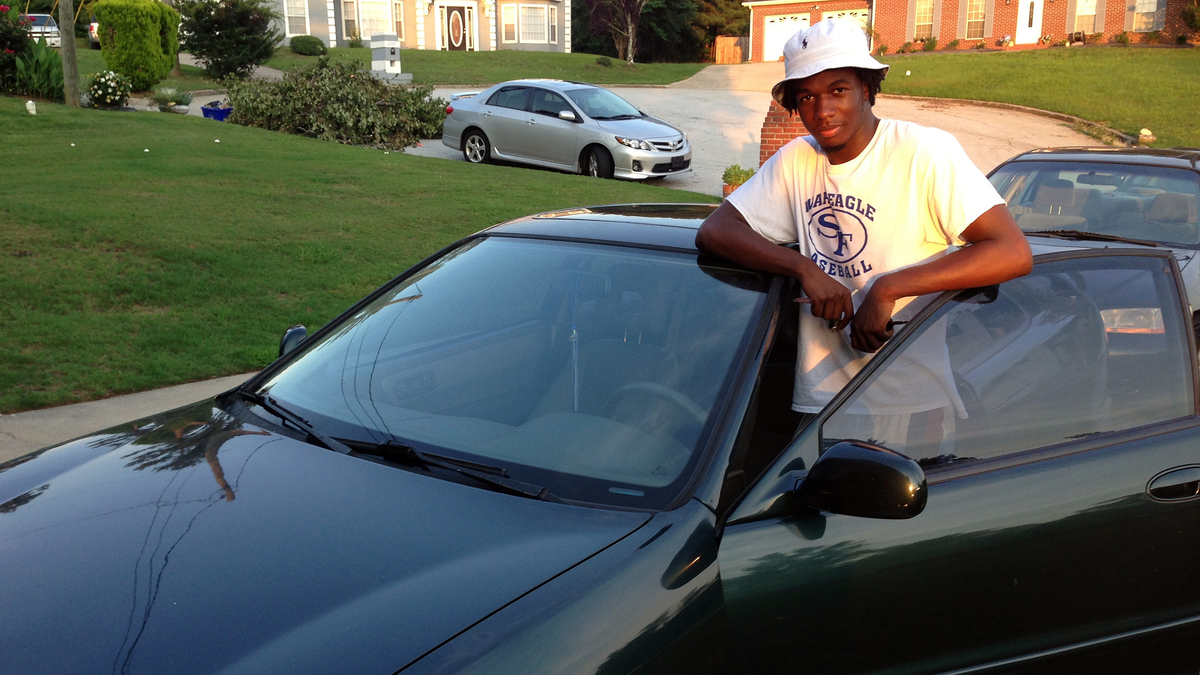 Earl Barkley, who recently got a car, looks for rides to school via Twitter and also gives rides when friends hit him up on social media.

This is how my generation gets around. We call it ridesharing.

What do his parents think about him doing this? "Well," he says, "my parents don't really know."

Lots of us are using Twitter and Facebook to find rides, and not just to school. Now that it's summer, we cyber-hitchhike even more, because rides are scarce and parties are plenty. It's awkward to call a friend and ask for a ride, and half the time, they'll say, "Sorry, my car is full." But with Twitter, you just tweet #AshleysPoolParty and look for other people heading the same way.

It may sound risky, but many teens stay within their own social circles to find rides and don't branch out beyond friends of friends when asking on Twitter. For me, I only rideshare with people I know, but to some young people, especially those taking longer trips, stranger danger is less of a concern. Take these Craigslist ads for example:

"Hey my name is Danny. I'm trying to get back home to Eureka. I'm 22, super friendly. Clean guy. I have money for gas."

"Hello! I'm looking for a ride to Las Vegas. It's my best friend's bachelorette party. I am a college student, 25 years old. Intelligent and energetic. And love to converse."

"Hey guys. I'm in need of a driving partner for a trip to the West Coast.... 1) We take turns filling up the gas tank. 2) Whoever is driving has control of the music."

The sharing economy got big during the recession, especially among young people. It allows them to use technology to access more goods and services, while also allowing them to share costs. And that technology, for me, is what the car was for my mom: a gateway to more freedom.

It's like my friend Earl says: "The symbol of freedom isn't the car anymore because there's technology out there that could connect you to a car."

According to the University of Michigan Transportation Research Institute, 30 years ago, 8 in 10 American 18-year-olds had a driver's license. Today, it's 6 in 10. So it's not that surprising that on my 16th birthday, I wasn't rushing to get a license. All I wanted was an iPhone. Schor knows people my age love being connected.

"One of the other important things about driving for young people is they have to disconnect from their technology," she says, "and that's a negative, so if they could sit in the passenger side and still be connected, that's going to be a plus."

To me, another plus is that ridesharing represents something much bigger than trying to save money. I see it as evidence that people still depend on each other. My generation shares their cars and apartments the way neighbors used to share cups of sugar. For the system to work, some of us still need our own cars. But until I get my own version of the silver Super Beetle, you can find me on Twitter.