Accessibility links
Combining The Nation's Digitized Libraries, All In One Place : All Tech Considered Libraries have been digitizing their collections for years, but the materials can be hard to find. Enter the Digital Public Library of America. Worried that Google has an outsized hand in digitizing books, the DPLA is combining, on one site, the digital collections of libraries nationwide — free. 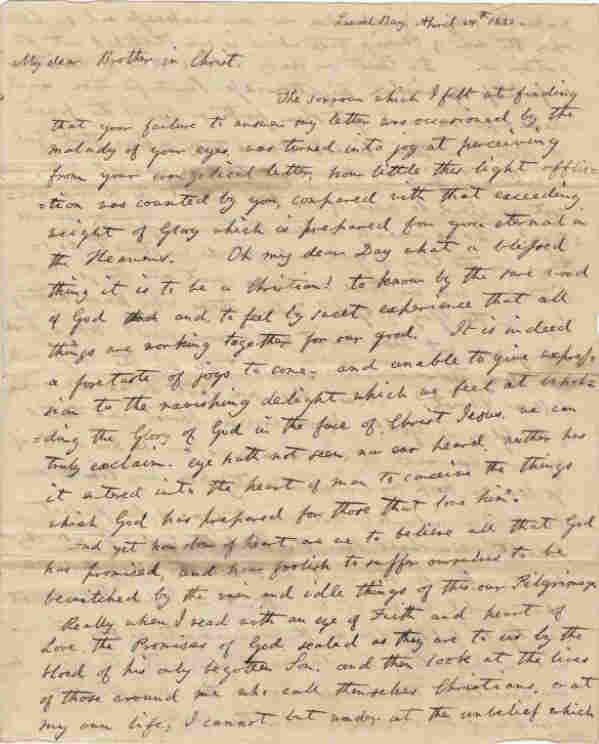 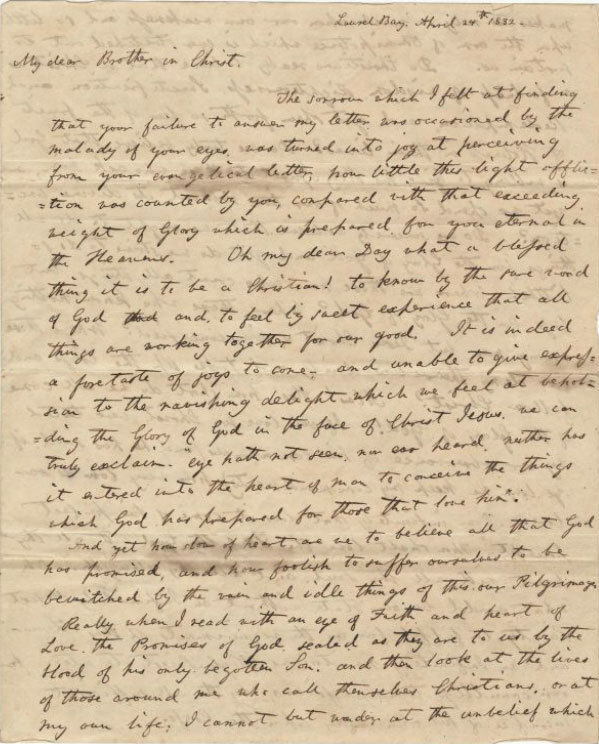 The DPLA has millions of items available online, like this letter written by onetime slave owner William H.W. Barnwell.

Via Digital Public Library of America and Lowcountry Digital Library

Part of a series, Keys To The Whole World: American Public Libraries

Buried in the archives of America's public and academic libraries are historical treasures — old papers, photos and records — that flesh out a detailed picture of our past.

Many libraries are trying to make it easier to find that material by putting digital copies online. But with so many different websites and databases to turn to, it may still require a research degree in Web searching to find anything. This spring, a program launched that aims to put all that great stuff in one place: the Digital Public Library of America.

The DPLA has already drawn scholars like Lincoln Mullen, a graduate student at Brandeis University who is researching the history of religious conversion in the United States. Mullen says the DPLA uncovered some hard-to-find documents at the College of Charleston in South Carolina — handwritten letters by a slave owner, William H.W. Barnwell, in which Barnwell discussed religious instruction to slaves and how the North misunderstood the South in these matters.

Mullen says it would have been really hard to find these documents by doing a general Internet search. "It's hard to know, apart from ... lots and lots of browsing, where those collections are available," he says. "They're all fragmented in so many different places."

Right now, there are only about 4 million items on the DPLA's site, but the collection is growing by about 500,000 new books and documents each month as more libraries from around the country come onboard.

The San Francisco Public Library is among those putting its digital archives on the DPLA. Recently, says the city archivist, Susan Goldstein, the library has been digitizing huge scrapbooks from the San Francisco Police Department. "A lot of them are full of mold, so ... we're scanning them because it's preservation," she says.

In the back rooms of the library's main building, technicians are busy scanning books, photos and newspaper clips to be put online. In one room, large books are being placed in a cradle, carefully pinned down and put under a camera.

It's a tedious, page-by-page process. But Goldman says these are detailed historical records that could be of interest to people outside San Francisco. There's the scrapbook of a famous homicide detective named Theodore Kytka, for example. Kytka was a pioneer in using modern techniques like handwriting analysis.

The San Francisco Public Library has been digitizing its historical document collections for years, including the scrapbooks of famed homicide detective Theodore Kytka. The SFPL is among scores of libraries and archives adding their digital collections to the DPLA.

"It's all his cases that he testified in or worked on," Goldman says. "So it's just all these murder cases, mostly," like a high-profile case of a wife poisoning her husband's mistress by sending her chocolates.

An Effort To Keep Collections In Public Hands

Luis Herrera, the San Francisco city librarian, is on the DPLA board. He thinks the service is going to be great for students of all ages, from grammar school to graduate school, in San Francisco and elsewhere,

"Think of the amazing stuff that's there," Herrera says. "Whether it's the first photograph of the moon ... [or] some amazing photographs of the civil rights movement. You can use that for your school experience."

And it's all free — which is part of the motivation behind the DPLA. The idea germinated on the East Coast at Harvard University's Berkman Center for Internet and Society. John Palfrey, one of DPLA's founders who now heads the exclusive private high school Phillips Academy, says he was concerned that the process of digitizing the nation's books and records was being left to a private company, Google, which had its own deals with publishers.

That "vested too much authority in a group of for-profits who had a particular interest — which was making money from the sale of books," Palfrey says.

"It's not to say authors and publishers shouldn't be able to make money from the sale of books — of course they should," he says. "But when we're talking about a library, and the future of libraries, I think a public-spirited entity needs to have a central role there."

But when it comes to more recent books and materials, the DPLA is caught in a bind. Libraries are locked in tough negotiations with publishers over how to purchase and lend copyrighted e-books. So, instead, the DPLA is targeting materials already in the public domain.

Palfrey says there is plenty that can be done with the material that is no longer covered by copyright. "If we were to get all public domain materials digitized in every library, and sharable from any other point on the globe, that'd be an enormous service to the world," he says.

It's terrific the DPLA is helping the world, but some public librarians are not sure it's what their patrons need. Jim Duncan, director of the Colorado Library Consortium, doesn't think that what the DPLA does fits the definition of a public library.

"What the typical public library user wants and needs ... it tends to be contemporary content, best-sellers," he says. "That's what they're coming to the public library to check out."

Duncan would like to see the DPLA use more of its muscle to negotiate with publishers to make more e-books available through libraries.

The backers of the DPLA say they do want to take on the copyright issues. But for now, they hope to lay the foundation by digitizing the resources they can get up quickly — and without a fight.