Accessibility links
How A Look At Your Gmail Reveals The Power Of Metadata : All Tech Considered The NSA says it's only examining traffic information, not the content of Americans' phone calls. How much can that information tell you? Quite a lot, and in some ways it's more useful than actual content. NPR's Larry Abramson learns what analysts can discover about his life and contacts just by looking at his Gmail account. 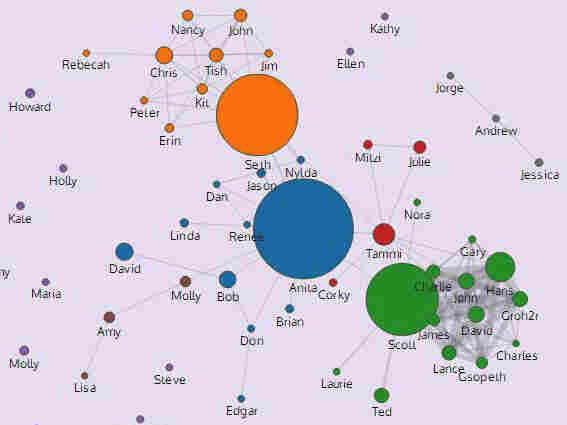 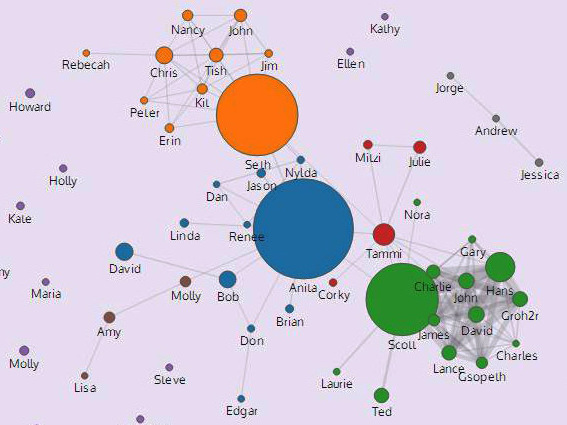 Sometimes you have to give up a little privacy in order to find out how much — or how little — privacy you really have. So I handed over the keys to my Gmail account to Cesar Hidalgo, a professor at the MIT Media Lab and the designer of a program called Immersion.

Immersion looks at the volume and frequency of your email traffic. It looks at what's known as metadata — to/from information. In this sense, it operates similar to the program the National Security Agency uses to collect data on most U.S. phone traffic, as part of its effort to fight terrorism. Neither the NSA nor Immersion can see what you are actually saying to your friends, family and work colleagues. But it's surprising just how much you can see simply by looking at metadata.

A few minutes after looking at my Immersion profile, Hidalgo had my number. Like a fortune teller, he could immediately ferret out my closest relationships.

For example, my correspondence with my girlfriend, Anita, put her right at the center of my Immersion profile. She appears as a big blue circle. By sorting our emails by month and year, Hidalgo could see that we met four years ago. He could see that things started out slowly, and as we became closer, messages flew back and forth at a faster rate.

"It was a little bit timid in the beginning, and then the relationship intensified," Hidalgo said with a wink.

An MIT Project That Lets You Spy On Yourself

A look at my correspondence with my son showed rather one-sided exchanges that should be familiar to any parent. "For every five emails that you send, he gives you two back," Hidalgo said. Again, a very accurate reading of a father's efforts to stay in touch with a wonderful son who is not the best correspondent. Hidalgo could see all that, based on just a few hundred emails.

The analogy to the NSA program is, of course, not perfect. In some ways, NSA investigators know less than Hidalgo does. The government says investigators cannot see identifying information; they just see connections between anonymous numbers.

Hidalgo notes that even without identifying information attached to these communications, the patterns he sees in metadata are unique. Few people have the exact same communications pattern with my girlfriend, my son, and with my close friends. So that information could potentially be used to identify me.

Just imagine how powerful this metadata could be when paired with other forms of metadata: Web-surfing information, credit card purchases, even perhaps cellphone location information, which some regard as the new frontier of metadata.

As many of us now know, our cellphones send out a signal, telling our provider where we are throughout the day. As with phone records, the government has argued that the location information from your cellphone belongs to the telecommunications company you subscribe to. The courts have agreed, saying these records are not subject to Fourth Amendment protections.

Thanks to electronic gadgets and our increasing use of the Internet, the quantity of metadata is exploding. And as Hidalgo's Immersion research shows, our understanding of what that metadata means is also advancing rapidly. The question is whether laws to protect that information are keeping up.