Accessibility links
To Attract Millennials, Automakers Look To Smartphones : All Tech Considered Automakers have set up shop in Silicon Valley to tap into the digital world as a way to lure younger drivers. They're looking outside the industry to learn how to make cars an extension of all the services millennials already love. 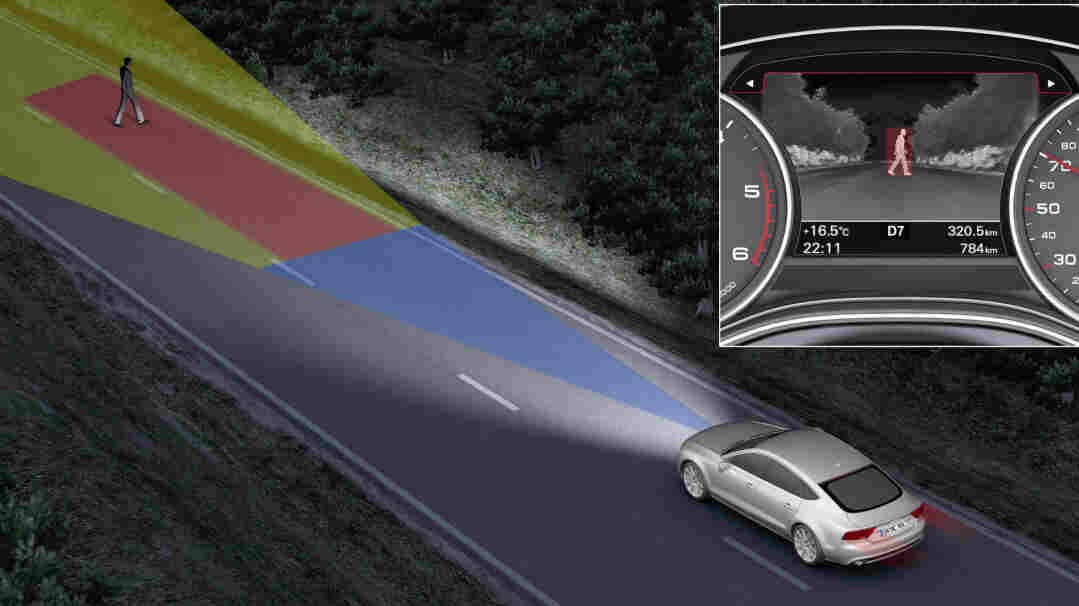 Audi's night vision assistant, an example of how car companies are making cars that are part of drivers' digital lives. Courtesy of Audi hide caption 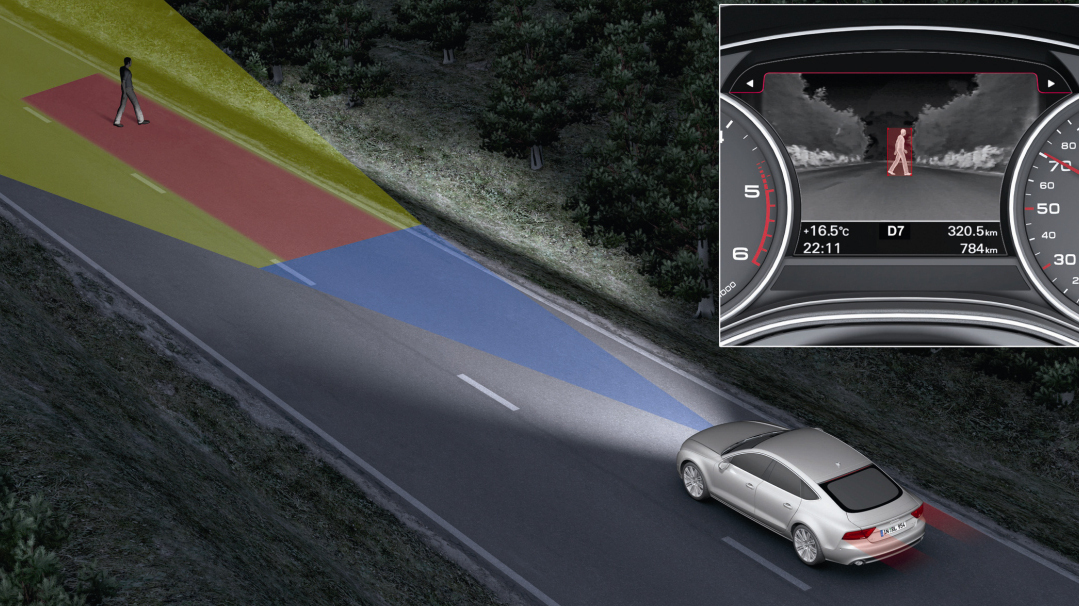 Audi's night vision assistant, an example of how car companies are making cars that are part of drivers' digital lives.

In an effort to attract young people to cars, automakers have set up shop in Silicon Valley and are looking to the digital world as a way to lure them.

Millennials are driving less and getting their licenses and cars later, and automakers are left to figure out how to compete not just with each other but also with consumer electronics. Cars used to represent freedom — now everyone knows, including carmakers, that's not true anymore. For millennials — and almost everyone else — freedom is now the cellphone.

"We absolutely have to deliver a car that is beautiful to look at and that drives as they want it to, but we also need to overlay some of the things that they expect now from other industries in order to reignite that relationship," he says.

What the savvy people in the car business say is that they have to look outside their industry to learn — from cellphones, apps, computers and video games.

"We can make the car that's becoming part of your digital life," says Chuhee Lee, the deputy director at Volkswagen's Electronic Research Lab in Belmont, Calif., a little town at the north end of Silicon Valley. This is where Volkswagen comes up with all the high-tech ideas it puts into its vehicles, especially the company's high-end Audi brand. For example, the S7, Audi's sports sedan, comes with a thermal camera to provide night vision.

Volkswagen's vision boils down to this: bring its cars into the digital world and make them an extension of all the services millennials already love.

"The car should be intelligent enough to interact with other intelligent systems around you, like a smartphone being very intelligent about ... your schedule, trying to propose and make arraignments for you," Lee says.

Lee describes turning your whole car into sort of a voice-activated system like Apple's Siri. And GM's McFarland says his company, like VW, is working on cars that learn your habits — your schedules, destinations and radio stations. And, McFarland says, ideally, these cars get better with time.

"We think there's opportunity to make it so that the day you drive it off the lot is the beginning, and you continue to personalize it and customize and add new content just like you do with a phone," McFarland says.

"It's the knowledge that vehicle collected over time that I don't have to retrain my car again once I get my next new Audi or Volkswagen," he says.

This is where Silicon Valley meets Detroit — connected, intelligent cars, and it's coming to a dealership near you — soon-ish.

Turning On A Dime

But really, the steep price tag on some of these wired cars — the base price for an S7 is $80,000 — makes them out of reach for many. To attract those without that kind of money, car companies have to put some of their most innovative, expensive technology in their cheapest cars. That expensive technology is always changing, and while tech companies can stop on dime, it is a lot harder to do the same with a 2,000-pound vehicle.

"One of the reasons for that has always been the need for absolute robustness in terms of platforms," says Jeremy Anwyl, vice chairman of Edmunds.com. He says because of safety, car companies are always going to be slow to the draw technology-wise. Tech companies love taking risks but with cars the stakes are higher.

"You can't have the car reboot as you're driving down the freeway and all the systems collapse," Anwyl says.

Right now, as good as some of the car infotainment systems are, many of them are just not as easy or intuitive as your average smartphone.

"This is not their forte. They understand styling. They understand how to make a car look lower and leaner. There is a lot of functionality that you want to deliver to the consumers in a way that's not confusing and it's intuitive, and most importantly they can actually access underway, without any safety risks," he says. "It's asking a lot."

It is asking a lot, but all the companies say they're getting there. But getting there might not be good enough in a world where last month's hot gadget is next week's trade-in. And it's unclear whether millennials are willing to wait around a couple of years for the car companies to catch up.

Noah Nelson is a reporter for Turnstyle News, a tech and digital culture site produced by Youth Radio.