Accessibility links
Out Of The Fields And Into Computer Science Classes : All Tech Considered In the largely Hispanic Salinas Valley, high school students are more likely to imagine a future in agriculture than high-tech. A new program is trying to change that.

To earn money for her family, Alicia Leon Rios worked in the fields in Salinas, Calif. Meanwhile, she sent her toddler, Leticia, to Mexico to be raised by her grandparents.

Even now, Alicia Leon Rios chokes up thinking about that difficult decision more than two decades ago. But it was worth it, she in Spanish, because her daughter "was able to choose another path." 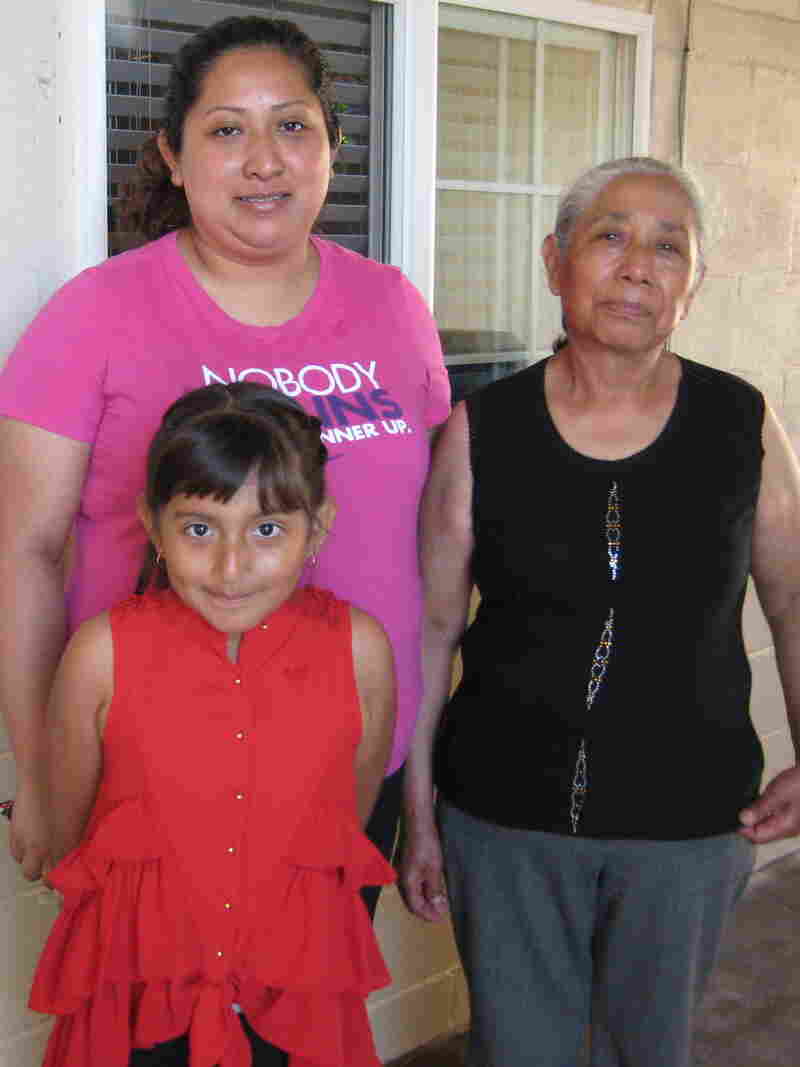 Leticia Sanchez hopes to get a high-tech job so her mother, Alicia Leon Rios, can quit working in the fields in California's Salinas Valley. Krista Almanzan for NPR hide caption 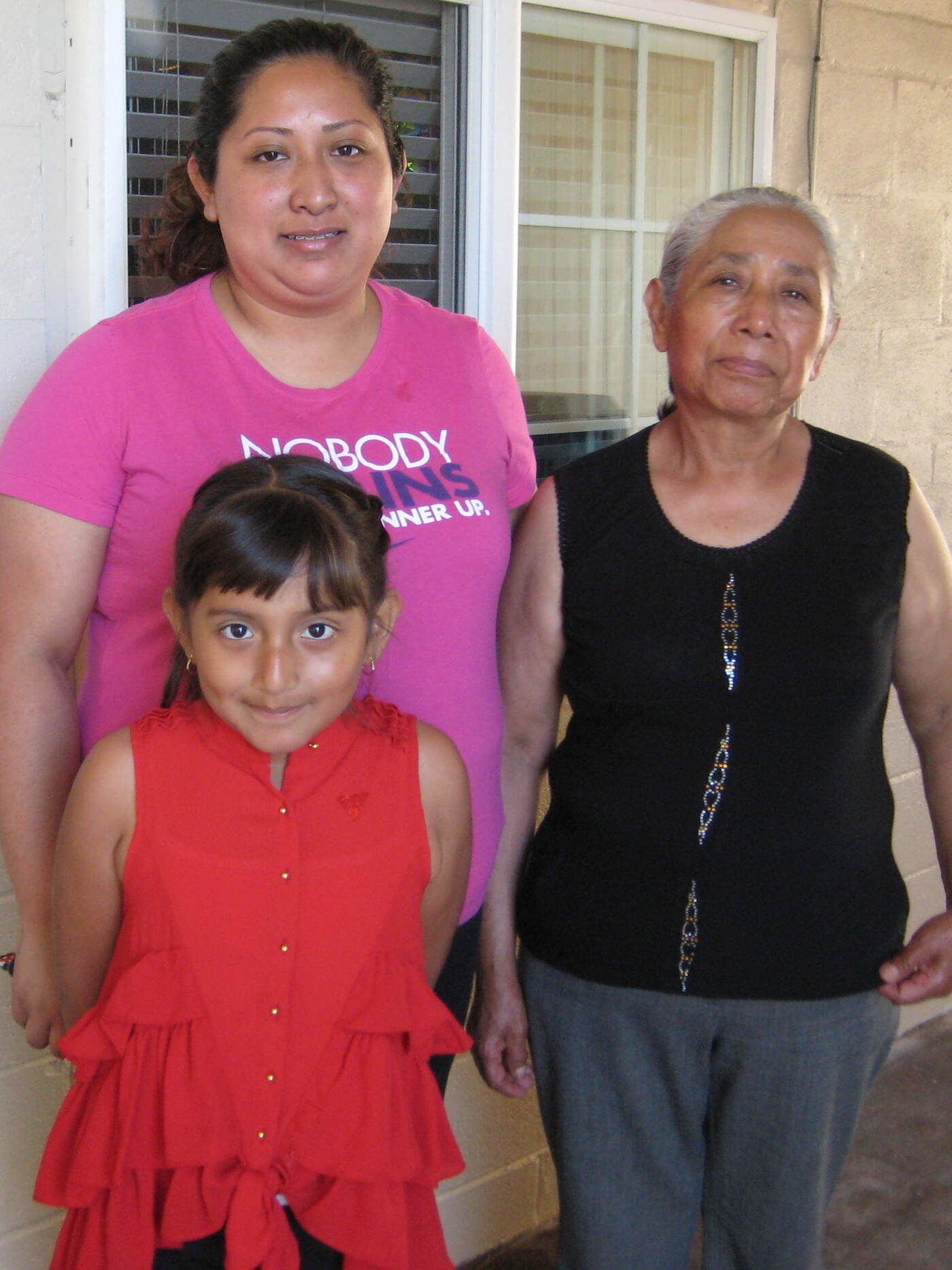 Leticia Sanchez hopes to get a high-tech job so her mother, Alicia Leon Rios, can quit working in the fields in California's Salinas Valley.

That path led to college.

Fast-Track To A Degree

In the largely Hispanic Salinas Valley, a region known as the "Salad Bowl of the World," young adults like Sanchez are often more likely to imagine a future in agriculture than high-tech.

But Sanchez is part of the inaugural class of a three-year, intensive bachelor's degree program in computer science and information technology, called CSIT-In-3. It's jointly run by nearby California State University, Monterey Bay, and Hartnell Community College.

In a dimly lit classroom, the glow of computer screens light up the faces of these freshmen. This computer science class doesn't look like many you'd find across the nation — most of the students here are Hispanic and about one-third are women.

"Most of the professionals in computer science are men, Asian or Caucasian men," says Sathya Narayanan, co-director of CSIT-In-3.

Narayanan says this program targets students traditionally underrepresented in computer science, and then removes many of the obstacles that can keep them from graduating on time, or at all.

First, unlike the normal college experience, in which students select their schedule, Narayanan says these students don't have to worry about logistics.

"All of that is completely planned for them," Narayanan says. "So every time, in the beginning of the semester, they will be told what classes they are going to be in. You focus on your academics. You focus on studying." 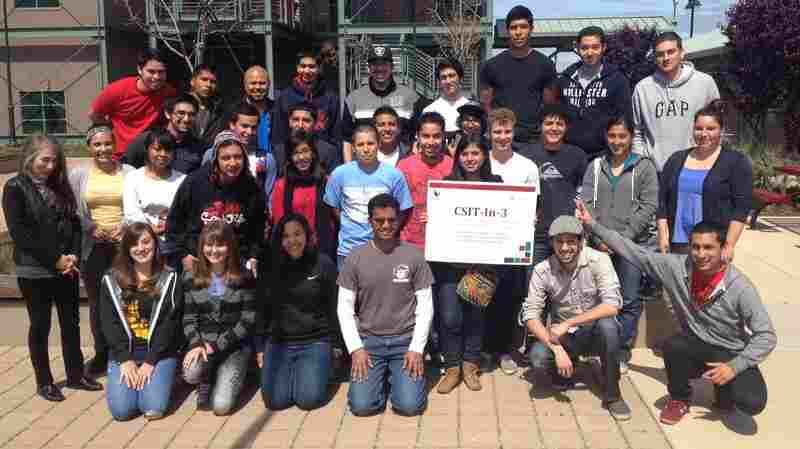 The inaugural class of the Computer Science and Information Technology program, scheduled to graduate in 2016. Hartnell College hide caption 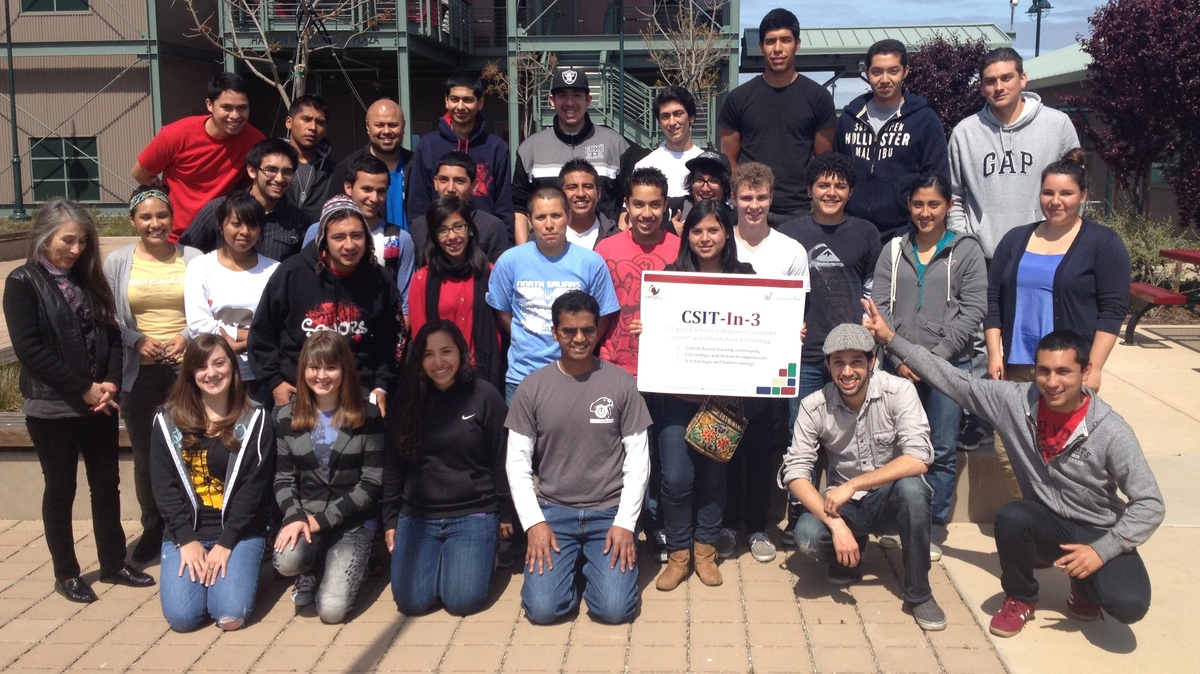 The inaugural class of the Computer Science and Information Technology program, scheduled to graduate in 2016.

Cost is often another obstacle. So by splitting classes between the community college and a four-year school, the price tag of the entire degree is kept at just more than $12,000. It's still too high for many of these students, but most have received full-ride scholarships.

Without that financial help, 18-year-old Mateo Sixtos would have to continue working in the fields while going to school, and that would make finishing in three years unlikely.

"Agriculture is a hard thing," Sixtos says. "It's 10 hours every day under the sun, and it's very difficult because your back is hurting all day."

It's that hard work ethic that program organizers hope will make these students succeed and stand out. Joe Welch, Narayanan's CSIT-In-3 co-director, says to stay in the program students must maintain a B average.

Connecting with prospective employers is where program organizers are already facing their own challenge. Welch says in trying to secure summer internships, they're finding many of the brand-name, Silicon Valley tech companies are used to dealing with brand-name schools.

"Frankly, they're so comfortable, they're not reaching outside that student stream," he says.

Many of the CSIT-In-3 students are from historically disadvantaged backgrounds and first-generation college students. Welch says he doesn't want them to get a handout. He just wants Silicon Valley to give them a fair shake, especially since companies have said they want to give these students an opportunity.

"So we're really asking them to let us meet them in an outreach effort and an engagement effort that they've espoused in many national platforms," Welch says.

Working at Google is just one thing Sanchez hopes to do with her degree. She also talks about developing software to help field workers like her mom learn English. Now a mother herself, Sanchez knows that whatever happens, her family is on a better path.

If all goes as planned, she and her classmates will graduate with bachelor's degrees from Cal State-Monterey Bay in 2016.

"It will really change my life, and also for my mom," she says, "because another of the things I want to do is take my mom out of the fields and just stay in the home and take care of my daughter."