Accessibility links
This Board Game Aims To Teach Preschoolers How To Code : All Tech Considered Robot Turtles is a tabletop board game that teaches children as young as 3 years old the fundamentals of computer programming. Entrepreneur Dan Shapiro came up with the idea while playing with his kids, and took a leave of absence from Google to get the game into production. 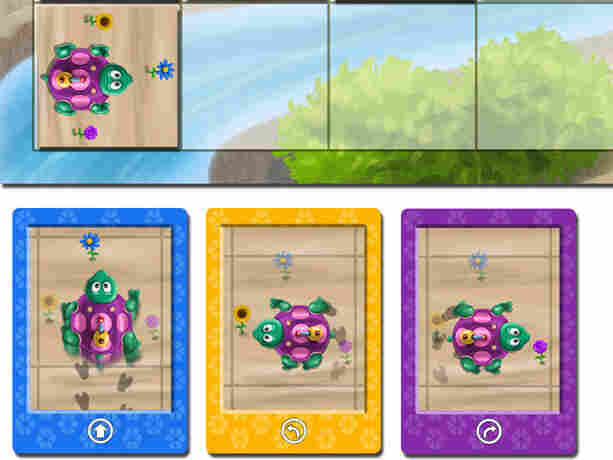 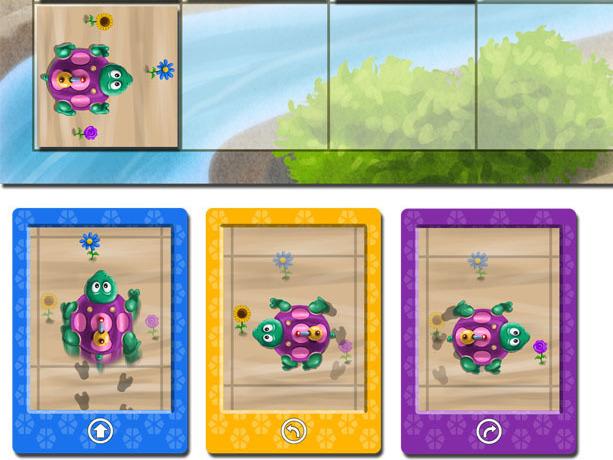 Robot Turtles is for future programmers ages 3 to 8.

These days, the effort to get more of us writing computer programs has become part of an "everybody should learn to code" ethos that folks like President Obama and Will.I.Am have gotten behind.

"We all depend on technology — to communicate, to bank, [for] information — and none of us know how to read and write code," Will.I.Am points out in an online ad for Code.org, a nonprofit aimed at making coding more mainstream. Obama said in February that he wants young people to "know how to produce stuff using computers and not just consume stuff."

There is no shortage of books and online programs teaching you how to code once you can use a computer. But how would you learn to code if you can't even read? How could 3-year-olds begin to learn the basics of computer programming?

That was the question swirling around the head of startup entrepreneur Dan Shapiro while playing with his twin kids one afternoon. [Disclosure: We didn't know it when we started reporting this story, but Dan is the brother of NPR White House Correspondent Ari Shapiro.] Dan Shapiro tried to come up with a way to play a game with his children without getting bored himself. Then he came up with his own: Robot Turtles, a tabletop board game that teaches youngsters the fundamentals of programming, without words.

"What would it be like if there was a way to write programs that had nothing to do with the English language? Ever since we got away from flipping switches [to interact with computers], we have been expressing programming languages in English. That's not a foregone conclusion," Shapiro said.

So he made up what is now Robot Turtles by cutting out clip art cards and moving the cards based on what his kids were doing. As the Kickstarter page for Robot Turtles explains:

"Pretty soon your kids will figure out the secret of Robot Turtles: it lets the kids control the grownups! The little programmers put instruction cards down, driving the turtles through the maze, but the grownup is the computer, executing commands on the board. At its heart, Robot Turtles is a game about bossing around adults. Just like programming is about bossing around computers."

"What they didn't realize is this is how programming starts," Shapiro said. "You go into the command line, and something happens. You type in another command, and something else happens. When they run into walls, my son said, 'Daddy, I want to play more cards at once,' which lit up my face. That is exactly how you start programming! You go from one command to a chain of commands."

Shapiro took a leave from his job at Google to get Robot Turtles to production, but it's a limited run. Those who donate to the product's Kickstarter by Sept. 27 can order Robot Turtles for $29. A single print run is planned, and that's it. But hopefully with this game's help, Shapiro says, today's tiny programmers will be writing the inspiring technology of tomorrow.