Accessibility links
The Promises And Pitfalls Of Social Media — For Police : All Tech Considered More and more, cops are using social media as a tool to investigate crimes and reach out to their communities. And it's not just a fad of funny tweets or YouTube surveillance videos — some are saying it's becoming a necessary tool for policing. 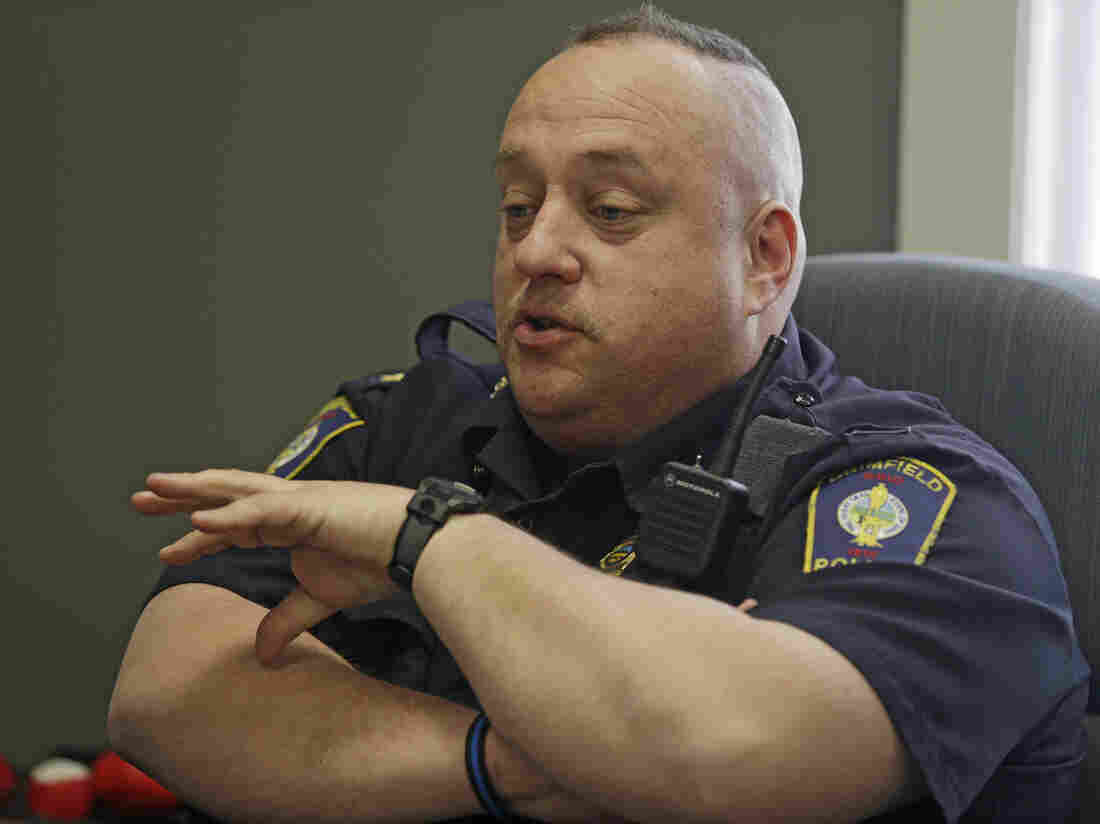 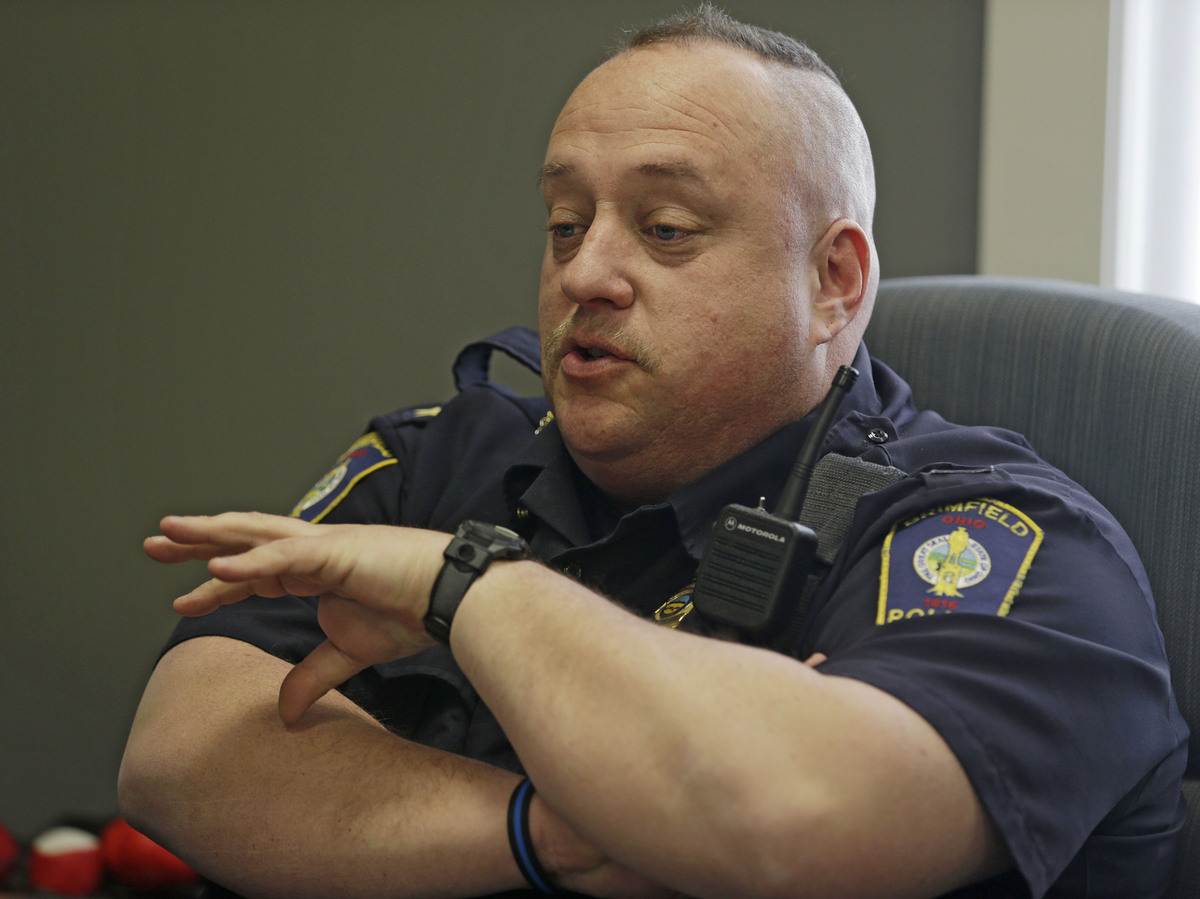 David Oliver, chief of police in Brimfield, Ohio, maintains a Facebook page that went viral (by police Facebook page standards) earlier this year. With more than 80,000 followers, he mixes humor with blunt opinions.

For years, teens in Upper Darby Township, Pa., have taken to the local cemetery for after-hours, underage and very illegal parties.

And for years, the cops in the Philadelphia suburb have played a cat-and-mouse game to break up the graveyard debaucheries.

But this year, when the cops caught teens drinking in the cemetery, they didn't just file some paperwork — they also tweeted about it.

Hey young people- the party in the cemetery didn't work out so well, huh? Sorry bout that. #wegotthekeg #whosgotthetap

In Upper Darby, it took one police captain, who remains alluringly anonymous on the Twitter account, to realize that the department was missing a whole way of communicating with the public. @UDPolice was born in March and has since gathered 2,300 followers.

Police Superintendent Mike Chitwood says it helps to give a face to law enforcement — one with pizzazz, comedy and a little irreverence. "With 140 characters, you can't say a whole lot," he says. "But with what little we say, the reception of the community at large has been positive."

Upper Darby is far from unique in utilizing social media to connect with a larger audience. In June, the Brimfield, Ohio, Police Department spent time in the national news spotlight for its spunky Facebook page that went viral.

A nationwide survey conducted last year of 600 law enforcement agencies found that 92 percent use some form of social media. Of those plugged-in agencies, 90 percent use Facebook, 50 percent Twitter and 37 percent YouTube, according to the International Association of Chiefs of Police's Center for Social Media findings.

Almost two-thirds say their accounts have improved community relations — the main goal of Upper Darby's Twitter account. But even more say it has helped with the most integral part of their work: investigating crimes.

They reviewed social media profiles of suspects or victims, created undercover social identities to gather information and posted surveillance videos or images in hopes the public might be able to help.

"It's kind of an expanded version of the good work they would do on the beat," says Sgt. Dave Norris of the San Mateo, Calif., Police Department. A few months ago, for example, his agency arrested a man on suspicion of attempted statutory rape after police detectives posed as a teenage girl online.

It's still not a replacement to old-fashioned analog investigations. "Traditional police work is the way to solve most of these crimes," says Sgt. Eric Gripp of the Philadelphia Police Department. But if there's a way out there to make their jobs easier, why not get on board?

So Philadelphia did. The department is active on Facebook, Twitter and YouTube, where it regularly gets tips about crimes, Gripp says. (It even was using Pinterest for a while, although that didn't grow as much.) During a fatal building collapse in June, it used its accounts to disseminate emergency information to the public as it was coming in.

The department also trained about 40 officers to tweet with their own individual accounts, Gripp says — officers like Michael Duffy (@PPDMikeDuffy), who recently posted a Vine video showing how his knee sometimes accidentally activates the emergency lights on his police car.

I'm sorry to the motorist I scared today, my knee turned the emergency lights on, twice. #NoTickets4U #6'4"... https://t.co/JD7JprD2h1

"We're not just a faceless entity," Gripp says. "We encourage everybody to be themselves."

New opportunities in technology, of course, come with a slew of new challenges.

Very few police departments understand the depth of social media or have put together a comprehensive strategy on how to use it, says Lauri Stevens, founder of LAwS Communications, a consulting company that works with law enforcement agencies to create these strategies.

"That is understandable because these folks aren't trained to do that — they're trained to be cops," she says.

It's also a field that is constantly changing, so keeping up requires labor, time and money — resources that some agencies may not have, says Nancy Kolb, who oversees the International Association of Chiefs of Police Center for Social Media.

And individual officers can make bad decisions in public forums: A police officer in Texas was under investigation for posting inflammatory comments on a Facebook page; a Florida beach officer was fired over Facebook comments about Trayvon Martin after George Zimmerman's not-guilty verdict.

In extreme cases, errant social media use can affect the safety of other officers, Kolb says.

Even with good intentions, the scope of the technology limits how much the police can do online. "Sometimes we can't address people in 140 characters," Gripp, from the Philadelphia Police Department, says — and that can be frustrating.

Still, Gripp says he can't imagine not using social media anymore. "It's here to stay," he says. "If anything, it's going to grow."

It's an undeniably useful tool, Chitwood, from Upper Darby, says — maybe even on the level of DNA testing. "I think the world of social media, when you look at the hundreds of millions of people who are on it, is the next step for policing," he says.

Stevens' LAwS Communications is hosting an entire conference on social media for law enforcement agencies next week. She says that most agencies are only beginning to embrace it.

"When will it be really a 'must'?" Stevens said. "From my perspective, I think that was yesterday."