Accessibility links
'Menstrual Man' Had An Idea To Help Indian Women : All Tech Considered A new movie documents how an Indian entrepreneur created a cheap machine to make sanitary napkins for rural women on the subcontinent. Women whose self-help groups buy Arunachalam Muruganantham's machine can make more than a dollar a day — close to a global poverty line threshold — selling the pads.

'Menstrual Man' Had An Idea To Help Indian Women

'Menstrual Man' Had An Idea To Help Indian Women 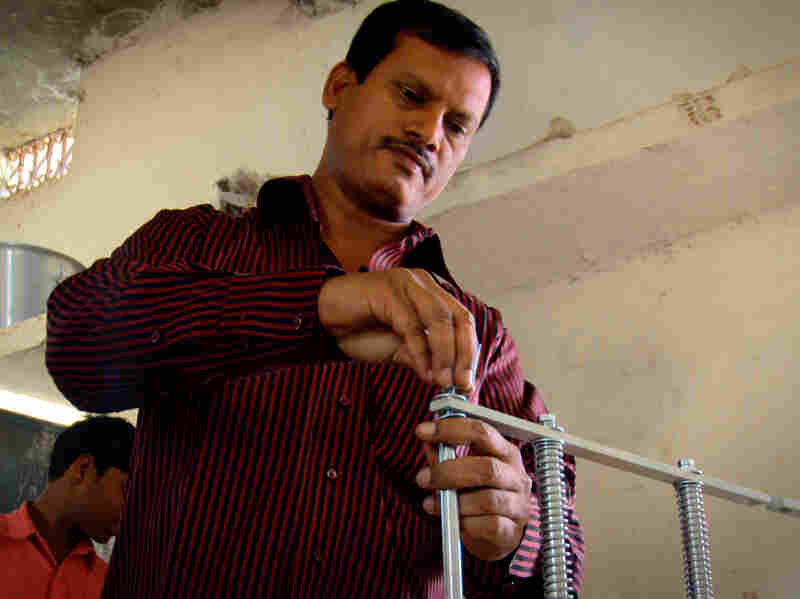 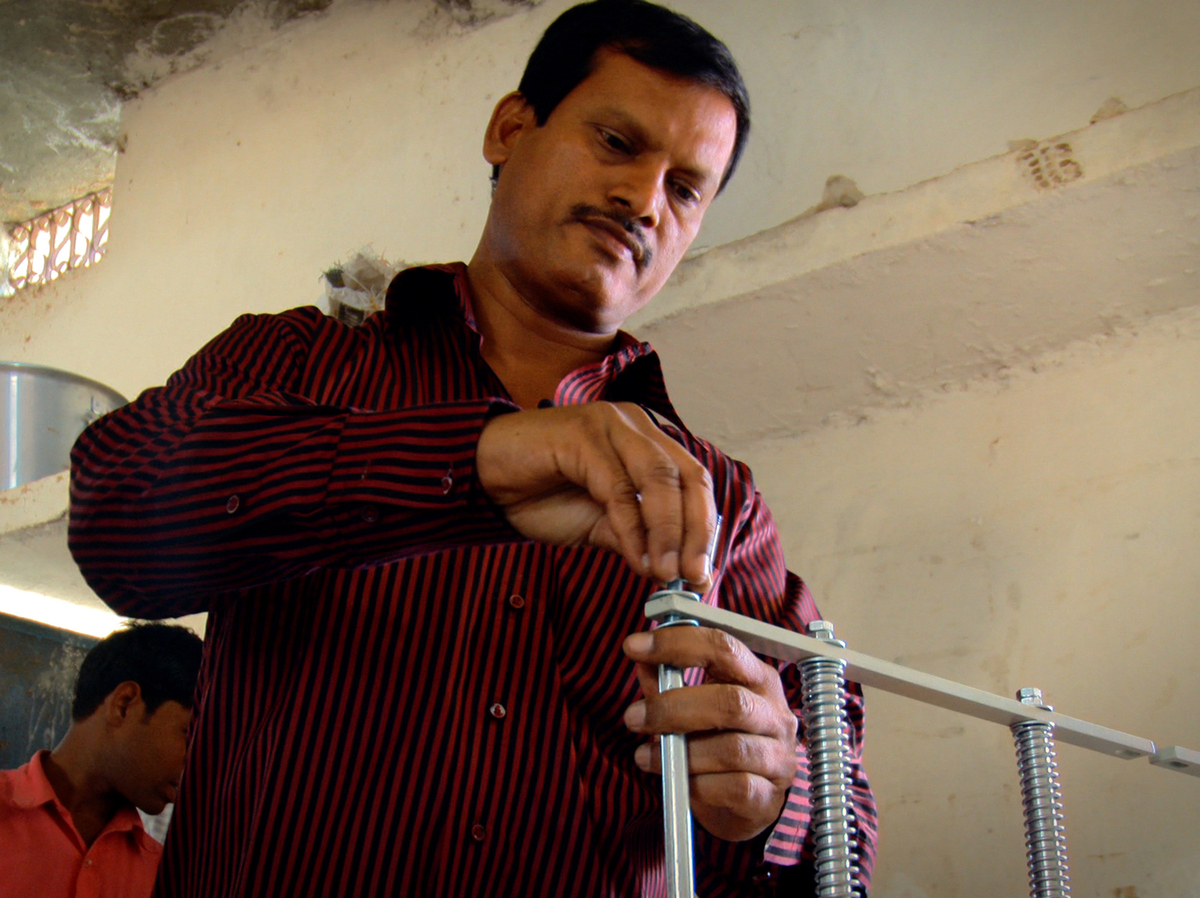 Arunachalam Muruganantham installs his machine in a village in Chhattisgarh, India.

Arunachalam Muruganantham had his light bulb moment when he was 29 years old, and holding a sanitary napkin for the first time.

Examining the cotton pads he was buying as a gift for his new wife, the Indian entrepreneur realized that the multinational company that produced them was probably spending cents on raw materials, and making a huge profit.

Women in Muruganantham's village in Tamil Nadu, including his wife, would often forgo these expensive pads for rags they used repeatedly through their cycles. Even more uncomfortably, sometimes they utilized husks or leaves during menstruation.

The exorbitant cost of the foreign-made pads cut into their families' meal budget. Given a choice between fresh pads and fresh milk, they chose the latter.

A new movie, Menstrual Man, documents how, at great personal cost, Muruganantham created a cheap machine to address persistent menstrual hygiene challenges for rural women on the subcontinent. But, as director Amit Virmani points out, the product's traction may have more to do with social entrepreneurship than with health concerns.

Women whose self-help groups buy Muruganantham's machine can make more than a dollar a day — close to a global poverty line — selling the pads.

Sanitary napkins from global companies are in Indian stores for about $1.50 for an eight-pack. The ones from Murugantham's machine wholesale at about 25 cents for an eight-pack; the women's groups can sell them at whatever retail price they choose, retaining the profit. The cost of the machines ranges from about $1,200 to $6,000, depending on the features.

"The primary impulse when people are struggling to make a living is either, 'How can I make more money?' or 'How can I save more money?' " Virmani said. "If you address those needs, your innovation stands a better chance to be adopted, to spread."

The machine, which Muruganantham began to research in 1998, has three stages of production. Inside a stainless steel container, a motor fluffs cellulose to prepare it as the core material for the napkins. Hand- and leg-operated tools are used to form the core of the napkin. A heat press is used to seal and apply the outer cover to the napkin. It's sterilized and packaged, and then ready to sell.

Muruganantham's invention was already spreading across India when Virmani found him last year, with 500 machines sold and an innovation award from India's president under the entrepreneur's belt. But getting there had been all uphill.

Once Muruganantham had prototyped the machine, he needed testers. But his wife and other family members refused, as did girls at the nearby medical college. So Muru, as Virmani calls him, decided to become a tester himself.

He filled bottles with animal blood and attached tubes that would press the blood into his drawers as he biked and walked around town. His rural village shunned him, viewing this with suspicion. And his wife's suspicions — that he was chasing medical college girls around town for something other than product testing — ended his marriage.

Still, for six years, Muruganantham pressed on (yup, pressed) — and now more than 1,000 of his machines have been sold in India. There's also been global interest in replicating the model, from Afghanistan to Rwanda.

Virmani said he attributes Muruganantham's success to the inventor's understanding of his core audience, starting with the rudimentary nature of the machine. "It's wooden, and it's got pedals where he could have had motors," Virmani said.

"He knows how to motorize the damn things, but the more complicated you make the machines, at some point they'll break down," Virmani said. "The way he's engineered it, it's pretty much something that [the rural women] can repair themselves, and they don't have to keep paying for servicing."

Muruganantham says he wants to see India become a "100 percent sanitary napkin country" in his lifetime.

As for Menstrual Man, it's on the festival circuit, and will be available on iTunes in January.