Accessibility links
Credit Cards Under Pressure To Police Online Expression : All Tech Considered The Web is full of sites promoting views that many find offensive — and often, those sites do business with credit card companies. Some advocacy groups are pressuring Visa and MasterCard to end those relationships, but others worry these campaigns will have a chilling effect on free speech online. 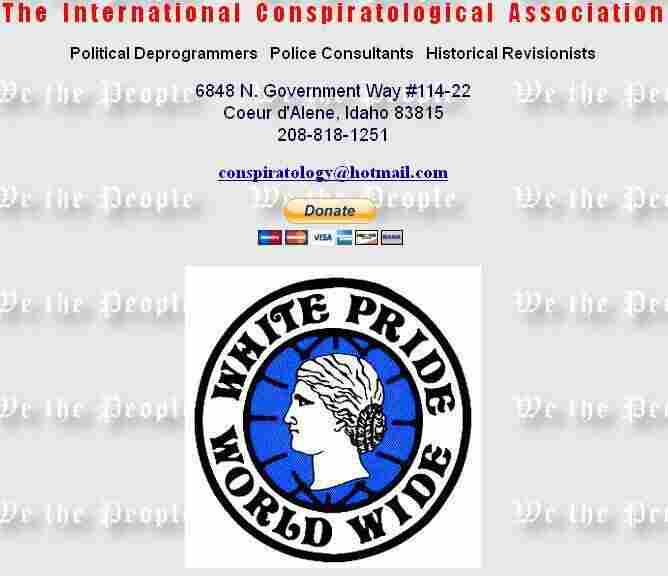 A screen grab of a cached version of The International Conspiratological Association website, an anti-Semitic organization. Under pressure from advocacy groups, MasterCard has since ended its merchant network relationship with the organization. The Internet Archive hide caption 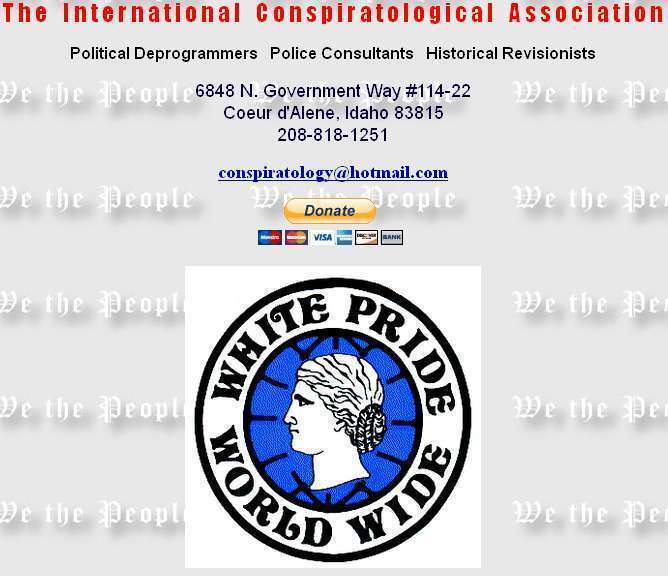 A screen grab of a cached version of The International Conspiratological Association website, an anti-Semitic organization. Under pressure from advocacy groups, MasterCard has since ended its merchant network relationship with the organization.

Earlier this month, major credit card processors including MasterCard, Visa and America Express announced they would stop processing payments to websites that collect and publish mug shots online. The sites say they are providing a public service, but they make their money by charging people a fee to remove these embarrassing photos from the Internet.

Critics call that business model extortion, and after an expose in The New York Times, credit card companies announced they wanted no part of it.

The incident serves as a reminder that, increasingly, credit card companies are being asked to act as the cops and regulators of online commerce and expression.

Credit card companies carefully cultivate their brands, says Jamie Chandler, a political scientist with Hunter College. Part of that, he says, is through aggressive niche marketing to minority groups.

For example, in June, MasterCard purchased promoted tweets to celebrate the Supreme Court's Defense of Marriage Act ruling, the case that found the federal government couldn't discriminate against same-sex marriages. Card companies have also invested heavily in creating and marketing products that work for observant Muslims.

But these same card companies sometimes also end up in a kind of business partnership with hate groups, Chandler says. That's because the companies make money from every transaction they process. So, if MasterCard processes a donation to a hate group, it profits.

"There is an inherent contradiction there," Chandler says, "because you're generating the perception you are a diversity-promoting organization." At the same time, he says, "if you go to the International Conspiratological website, the credit card acceptance icons are directly over a graphic that says, 'White Pride World Wide.' "

At least, they used to be. Chandler, working with a state legislator in New York, approached MasterCard about changing that. "And they decided to drop the eight Holocaust-denial organizations we have identified from their merchant network," he says — including the International Conspiratological Association.

That means the group really can't do business online right now. To buy a T-shirt, you'd have to mail them a check.

And this is just the start, Chandler says. He has identified more than 40 groups that he wants card companies to stop doing business with. "The next step is to expand that to the anti-gay, Islamophobic, xenophobic organizations that we identify," Chandler says.

One of the groups on Chandler's list of targets is the Family Research Council, because of its opposition to same-sex marriage and gay rights. But the organization is also a major force in mainstream conservative politics.

Rainey Reitman, director of the activism team at the Electronic Frontier Foundation, says efforts like Chandler's are becoming more common, and come from all over the political spectrum.

"Certainly WikiLeaks was a game-changing moment in sort of the financial privacy, financial censorship fight," she says. In that case, credit card processors said WikiLeaks was either engaged in illegal activity or actively encouraging it.

Concerns About A Chilling Effect

Credit card companies have a huge amount of discretion, Reitman says. "I have noticed a serious trend toward what we often call the weakest link of taking down free speech, which is putting pressure on payment providers to suspend the accounts of controversial websites in order to basically shut the website down," she says.

Chandler argues that this isn't a free speech issue. He says companies like MasterCard have the right to decide whom they do business with, and he is simply pressuring them to live up to their own policies on diversity and inclusion.

John Muller, a vice president at PayPal, says his firm's philosophy is to make it easy for anyone, like small businesses and individuals, to accept payments. That often leaves companies like PayPal caught in the middle, he says.

They have to comply with a web of state and federal regulations and depend on payment networks owned by the big card companies to clear transactions. "So we certainly have to respect their interests and their rules as well," he says.

"Ultimately, Visa and MasterCard are the ones with the problematic policies," says Reitman, who has written about PayPal and censorship concerns for the Electronic Frontier Foundation. "They've got vague polices. Payment-card providers like PayPal don't know how to interpret them ... and they are shutting down sites that aren't even violating the First Amendment — legal sites with legal content."

I was hoping MasterCard and Visa would explain how they made decisions like these. Why, for example, did MasterCard decide to flag Holocaust deniers but continue to facilitate payments to Abiding Truth Ministries, a group accused of advocating for the death penalty for homosexuals?

But MasterCard officials declined to explain their decision-making process in detail. Instead, they said that all credit card companies face the same challenges. They said they are required by law to block illegal commerce and they pointed me to the rules they publish for merchants and banks that want to use their network. The rules reserve MasterCard's right to penalize anyone on its network who facilitates transactions that reflect negatively on the company's brand.