Accessibility links
What's Creepy, Crawly And A Champion Of Neuroscience? : All Tech Considered The new RoboRoach project allows users to influence the movements of cockroaches with a smartphone. Greg Gage of Backyard Brains says it's not brain control but more like the bridle of a horse. The RoboRoach just provides a sensation that makes the cockroach perceive an obstacle.

Soon you'll be able to direct the path of a cockroach with a smartphone and the swipe of your finger.

Greg Gage and his colleagues at Backyard Brains have developed a device called the RoboRoach that lets you control the path of an insect.

It may make you squirm, but Gage says the device could inspire a new generation of neuroscientists.

"The sharpest kids amongst us are probably going into other fields right now. And so we're kind of in the dark ages when it comes to neuroscience," he tells NPR's Arun Rath. 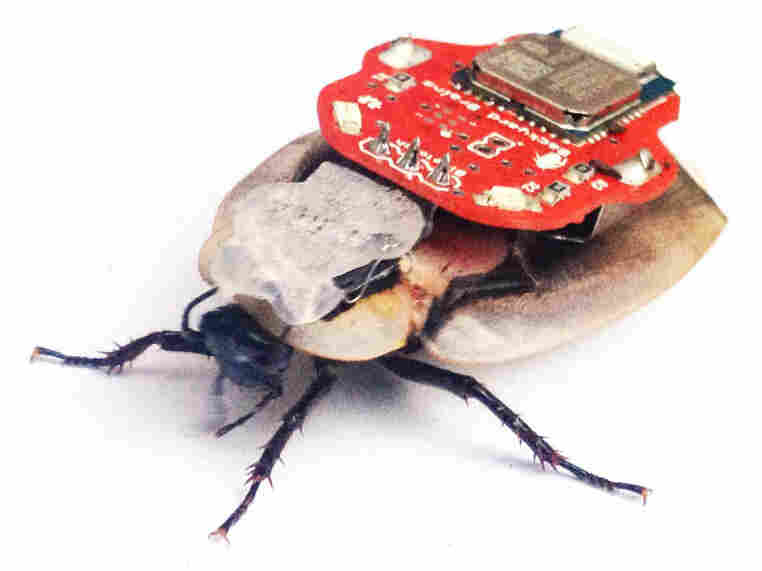 The RoboRoach device allows users to influence the movements of cockroaches with a smartphone. Backyard Brains hide caption 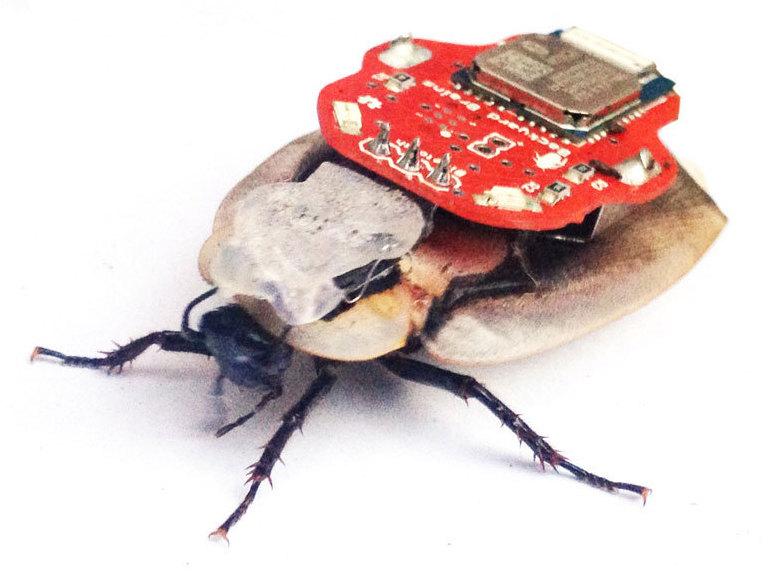 The RoboRoach device allows users to influence the movements of cockroaches with a smartphone.

He wants to get kids interested in neuroscience early enough to guide them toward that career path. And a cyborg cockroach might be the inspiration.

"The neurons in the insects are very, very similar to the neurons inside the human brain," Gage says. "It's a beautiful way to just really understand what's happening inside your brain by looking at these little insects."

Directions Vs. Free Will

The idea was spawned by a device the Backyard Brain-iacs developed called The SpikerBox, which is capable of amplifying real living neurons. Insert a small wire into a cockroach's antennae, and you can hear the sound of actual neurons.

"Lining the inside of the cockroach are these neurons that are picking up touch or vibration sensing, chemical sensing," Gage says. "They use it like a nose or a large tongue, their antennas, and they use it to sort of navigate the world.

"So when you put a small wire inside of there, you can actually pick up the information as it's being encoded and being sent to the brain."

With the RoboRoach device and smartphone app, you can interact with the antennae to influence the insect's behavior.

There are some people that get really sort of scared ... that we're taking over the free will of this cockroach. But in essence, that's actually not the case.

When you swipe your finger on your mobile phone, the app sends a message using Bluetooth to the device, which then sends a small pulse of electricity into the left or right antenna.

The result: a cockroach that follows your directions.

Since Gage introduced the RoboRoach at a TEDx conference earlier this month, it has stirred up some ethical concerns and questions around animal treatment.

"There are some people that get really sort of scared when we start talking about brain control — that we're taking over the free will of this cockroach," he says. "But in essence, that's actually not the case."

Gage says the RoboRoach just provides a sensation in the antenna that makes the cockroach perceive an obstacle in its path. He compares it to the bridle of a horse.

"You can have these reins — you can pull the horse left or right," he says. "You can do the same thing with a cockroach. It thinks it's being touched on the left or right side and it will sort of turn in the counter-lateral direction."

With the RoboRoach, you can wield influence over a single insect. But what about swarms of these cyborg cockroaches?

Dr. Edgar Lobaton is an assistant professor at North Carolina State University. He's in the simulation phase of his latest project: using swarms of up to 1,000 cockroaches to assist in search-and-rescue operations.

"We can use this collection of agents to do an exploration of the entire space, to be able to localize potential people that may be trapped in the ruins after these disasters," he says.

Wearing backpacks similar to the RoboRoach, their movements can be used to map structures like a collapsed building. Lobaton says cockroaches are perfect for the job because they're natural explorers.

"For these particular insects, they have gone through a lot of evolution. There's a lot of development in there to make them very flexible, to be able to accomplish things related to exploration and the search of food," he says. "So what we're trying to do is exploit basically this design from nature to be able to use it in our advantage."

So you might think twice before stomping or spraying the next cockroach you encounter with insecticide.

Cockroaches could be deployed to save your life one day. Or, at least, teach you a little bit about neuroscience.