Accessibility links
A Diagram Of HealthCare.gov, Based On The People Who Built It : All Tech Considered We used the testimonies of the biggest contractors involved with the HealthCare.gov application system to create this guide to how the site's various parts work together, and how the complex system for registering you for health insurance is supposed to work. 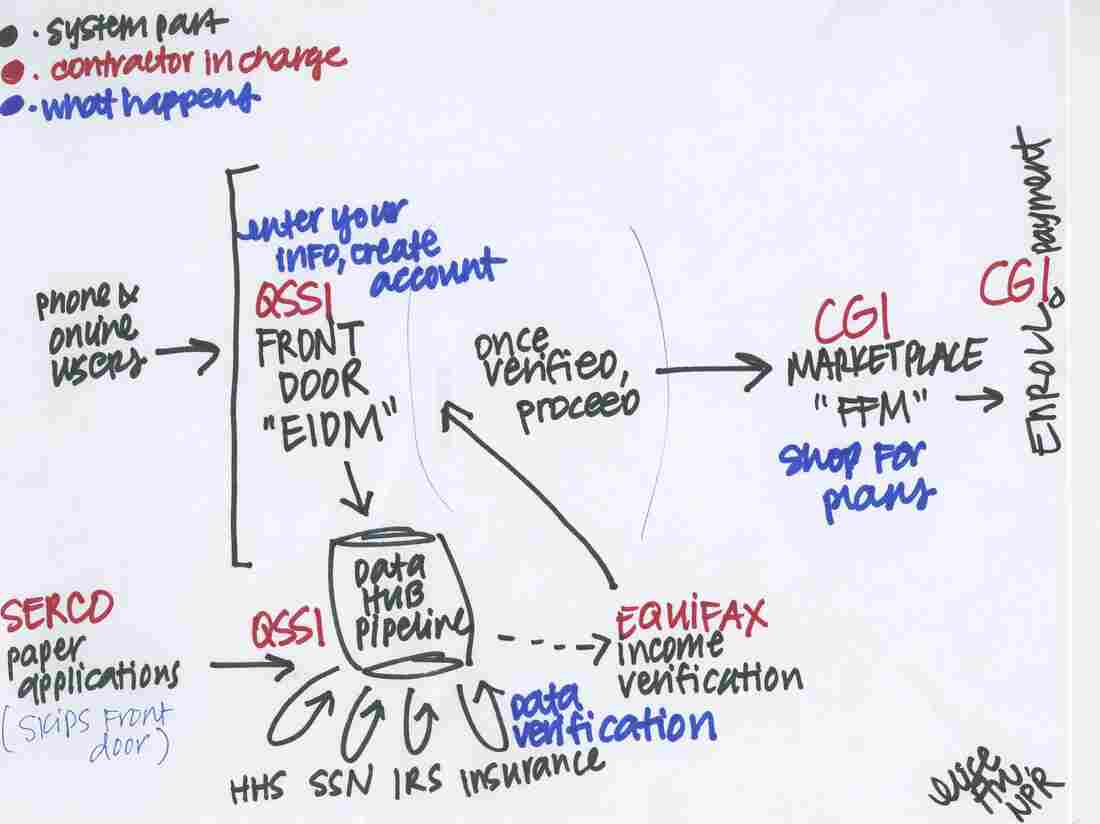 An attempt to draw out the various parts of HealthCare.gov's tech system, based on the testimony of its contractors. Elise Hu/NPR hide caption 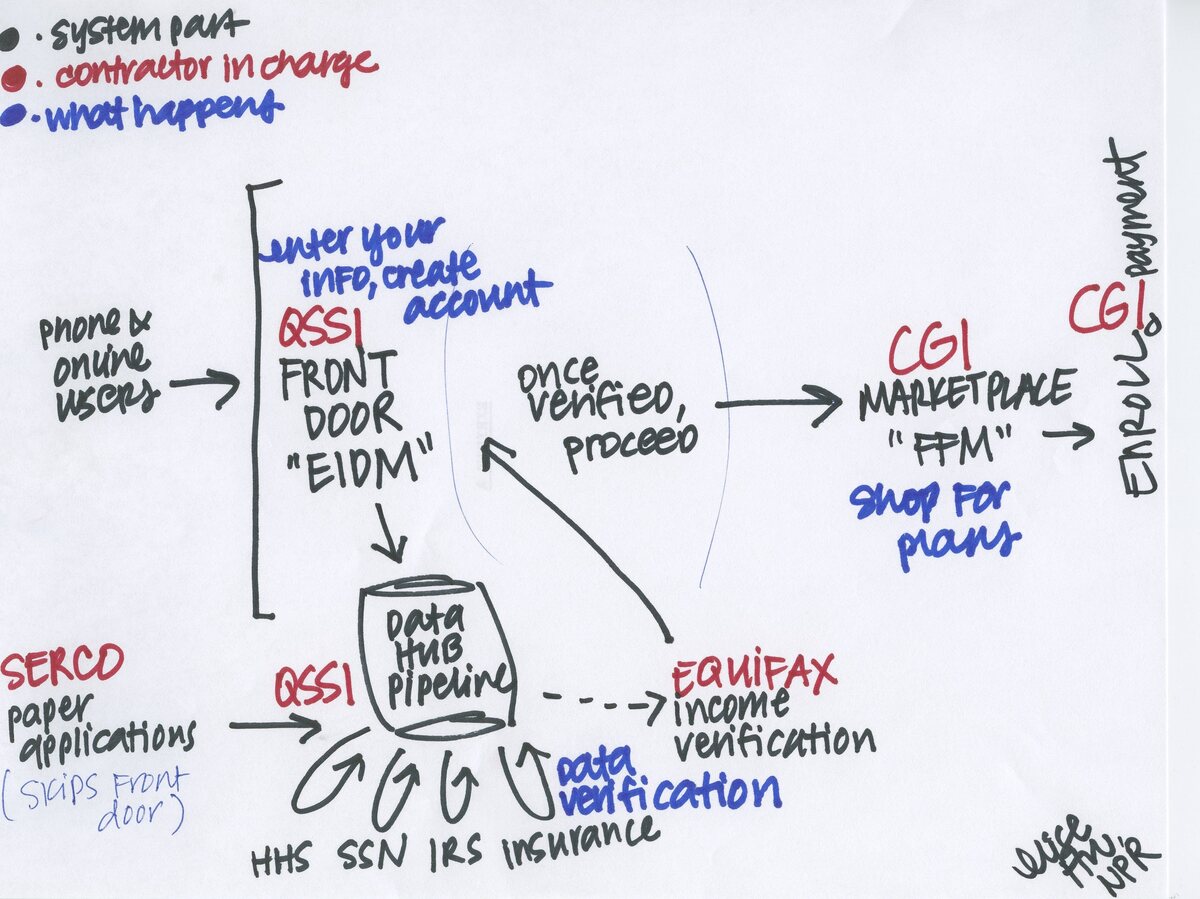 An attempt to draw out the various parts of HealthCare.gov's tech system, based on the testimony of its contractors.

One of the major issues that's emerged since the failed rollout of HealthCare.gov is that there was no lead contractor on the project. (CGI Federal was the biggest contractor — awarded the most expensive contract — but says it did not have oversight over the other parts of the system.) Instead, the quarterbacking was left to the Centers for Medicare and Medicaid Services, a subagency of the Department of Health and Human Services.

As it's become clear recently, the team at CMS did not have the in-house technological expertise to be an effective "quarterback" over a complicated and unprecedented tech system.*

The testimony of contractors on the Hill today before the House Energy and Commerce Committee illustrates the complexity of not just the system, but the procurement process that led to having different contractors responsible for separate parts of a whole that were all dependent on the reliability of other parts.

"When you have five or six different people, each optimizing their part of the process, it's easy to pass a performance problem around in an infinite loop," says Michael Slaby, who headed the technology systems behind President Obama's 2008 and 2012 campaigns.

We tried to draw out each part of HealthCare.gov based on how 4 of its 55 total contractors described it. But if you prefer reading about their responsibilities, I've laid that out below.

CGI Federal is the contractor that has developed a portion of the federal exchange, the software application known as the Federally Facilitated Marketplace, or "FFM." It's the online marketplace for shopping after you create a secure account, so it's a combination of the website and a transaction processor for taking payments after you enroll.

Tools created by CGI include the e-mail that is sent to the user to confirm registration, the link that the user clicks on to activate the account, and the Web page the user lands on.

QSSI built the enterprise identity management (or EIDM), better known as the front door to HealthCare.gov. It's the registration management tool — the part that allows users to create secure accounts. You have to get past the front door before getting to the marketplace. According to administration officials, high traffic led the account creation, or front door, to bottleneck, which prevented the vast majority of users from accessing the marketplace. QSSI says the bottleneck happened because of a late-in-the-game decision to force users to create an account before getting to browse the plans.

QSSI also built the Data Services Hub that is not actually a hub because it doesn't store data. It's better described as a pipeline that transfers data — routing queries and responses between various trusted data sources. For example, after you enter information about yourself, things like citizenship must be verified. The pipeline directs queries to information sources, such as government databases that verify that information, and sends the responses back to the marketplace.

Data from the Internal Revenue Service, the Department of Homeland Security, Social Security and insurance carriers will be channeled by this pipeline.

Equifax is responsible for income verification data for those seeking financial assistance (subsidies) through the new health law. It does real-time verification of income and employment, and pipes it through the "hub." It verifies a user's eligibility for Medicaid and the Children's Health Insurance Program (CHIP), and for eligibility for tax credits and for reduced copays and deductibles for low-income applicants. This happens after a user gets through the front door, of course.

Serco's contract is to handle the paper applications. To date, the company has received about 8,000 paper applications. But, "Our challenges have included coping with the performance of the portal as that is our means of entering data just as it is for the consumer," Serco's John Lau says. The contract awarded had projected Serco to process 6 million paper applications by the end of March 2014.

*To be fair, the federal government isn't structured in a way that is inviting to the most expert technology minds. The way government hires for tech projects treats technology systems like single end products — a bridge, for example — that can be bought and built and left alone, instead of as services that roll out in stages, respond to users, and are continuously nurtured. For more on that topic, check out my Q&A with Mike Bracken, the United Kingdom's executive director of digital.