Accessibility links
Sportvision Wants To Take You (Home) To The Ballgame : All Tech Considered You may know Sportvision as the creators of the yellow line you see on the field during football broadcasts. But the company makes graphical enhancements for all kinds of sports — and hopes its innovations will make watching games on TV even better than cheering from the sidelines.

Listen
Sportvision Wants To Take You (Home) To The Ballgame 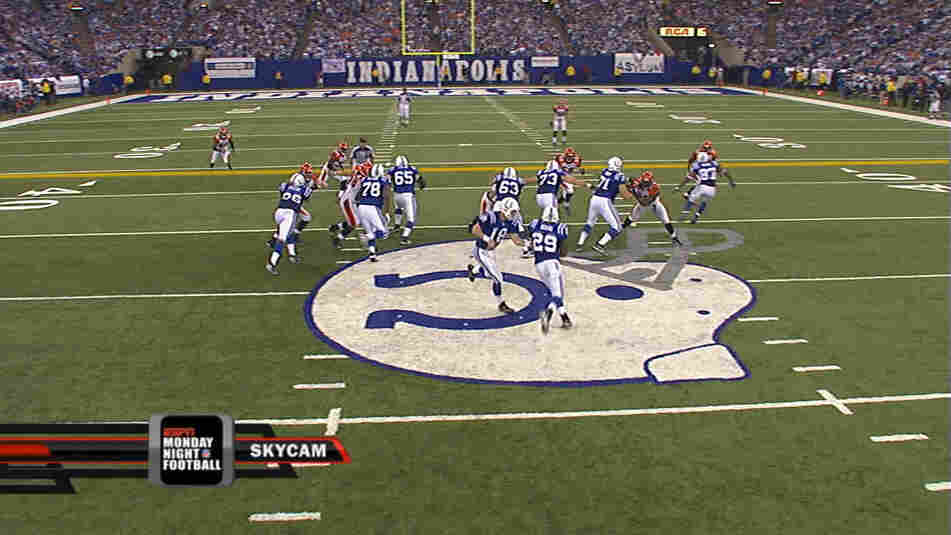 Sportvision creates its on-screen graphics, like the Virtual Yellow 1st & Ten line, with infrared sensors attached to uniforms and positioned around the stadium. The line shows viewers how far the offense has to advance the ball to earn a first down. Courtesy of Sportvision hide caption 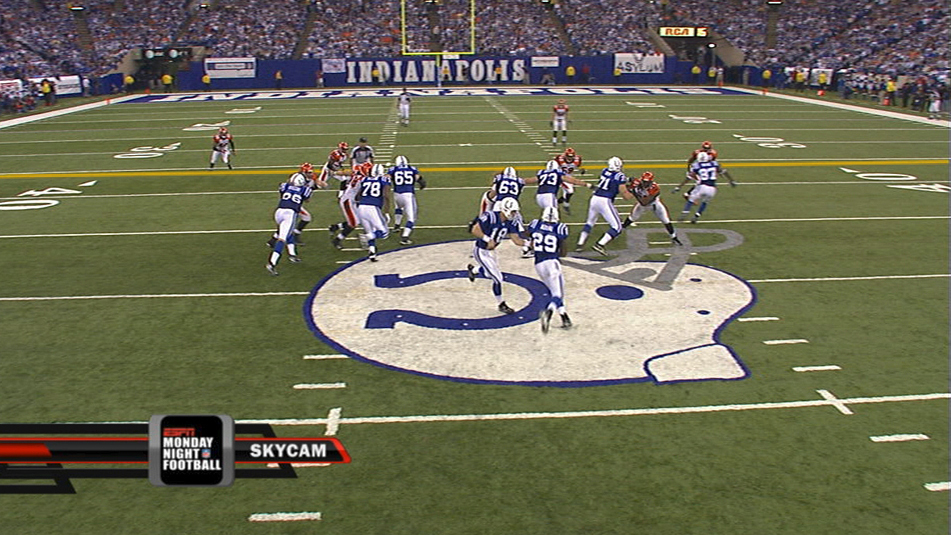 Sportvision creates its on-screen graphics, like the Virtual Yellow 1st & Ten line, with infrared sensors attached to uniforms and positioned around the stadium. The line shows viewers how far the offense has to advance the ball to earn a first down.

These days, you'd be forgiven if you're more excited about watching the "big game" — whether that's football, basketball, hockey — on TV rather than from inside a sports arena. At least, that's a trend that the Chicago-based sports graphics company Sportvision is banking on.

"With wide-screen TVs and high definition, and these man caves and all the graphics and data that we give you that they can't replicate at the game, a lot of fans are saying, 'I'd rather stay home and watch it,' " says Hank Adams, the company's CEO.

If you watch sports on TV, you probably know Sportvision, if not by name. The company adds those colorful, on-screen graphics to live sports events, like the virtual strike zone box that logs trajectory of a baseball pitch as it crosses the plate, the country flags magically hovering over America's Cup yachts and, of course, the company's best-known invention: football's first-down "yellow line."

That's the line — trademark name Virtual Yellow 1st & Ten — that looks like it's painted on the field during game play. Sportvision debuted it with ESPN back in 1998.

The glowing hockey puck known as FoxTrax debuted during the National Hockey League All-Star game on Fox television in 1996. It wasn't a hit with fans, but it helped Sportvision develop its more successful football graphics.

'The Guys Who Draw The Yellow Line'

Adams has tried to describe his business in other terms, he tells All Things Considered host Audie Cornish, but "in spite of everything else that we do, people keep coming back to that ... I try and then eventually just default to, 'Well, we're the guys who draw the yellow line.' "

The company hatches all its technologies in Silicon Valley, in a Mountain View, Calif., lab staff call "the war room." It's a giant warehouse space where you'll find stray football helmets trimmed with infrared lights pinning down piles of paper. TV cameras are mounted on high-rise platforms in the corners of the room.

The cameras are all trained toward the floor, a replica of an NFL field painted green and white. It's one-eighth of the actual size and would take about 10 strides to cover from end zone to end zone.

There are infrared and motion sensors in NFL stadiums around the country just like the ones around this model, and they all do the same thing: map and track everything on the field and send that data to Sportvision. Sportvision then creates a computer-generated graphic superimposed over the broadcast; in this case, a yellow line.

It's a lot like the so-called green-screen technology that your local TV weather team uses. But the Sportvision technology, Adams says, is a bit more sophisticated.

"In football, it's not so easy, because it's grass and painted logos and football pads and pants that can get grass stains on them," Adams explains. "It's a very tough thing for us, to distinguish between, say, the Green Bay Packers' green pants and the color of their field."

It's been a game of trial and error over the years, Adams says, to figure out how to perfect the technology.

"For a graphical enhancement to work, it has to be something that's hard to see, happens a lot and is really important to the game," Adams says. "And if we can meet those three criteria, it turns out to be very successful for us." 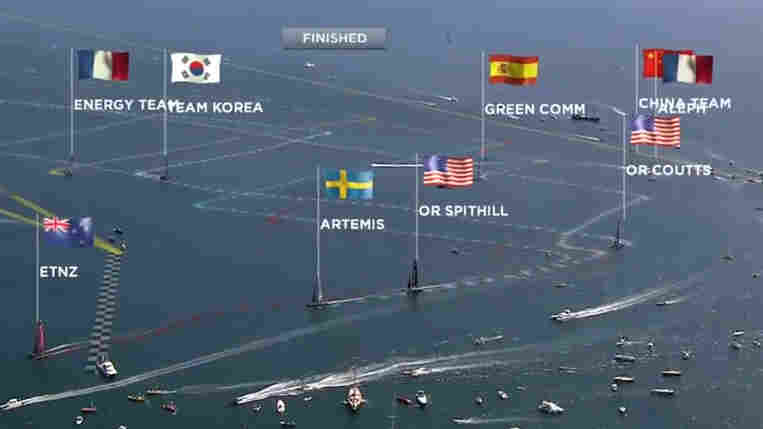 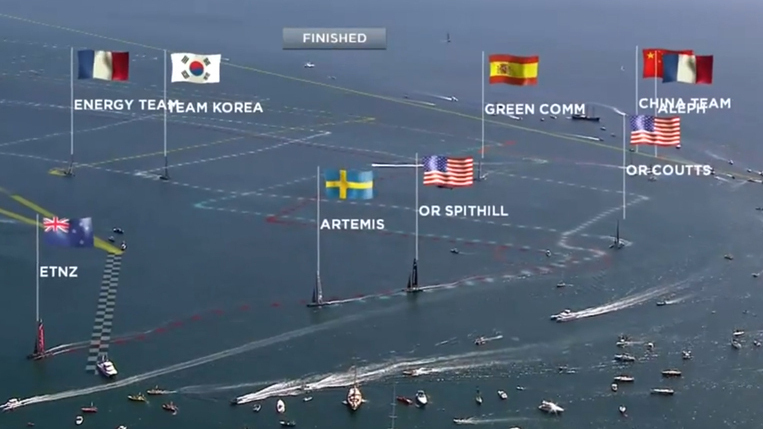 Sportvision uses helicopter and water-based platforms to superimpose the national flags of competing teams over broadcasts of the America's Cup sailing competitions.

That "yellow line," for example, grew out of a technology hockey fans may remember: "the famous, or infamous, glowing puck," Adams says.

Known as FoxTrax, the puck had electronics embedded inside that tracked its movement across the ice during live play. "Some people loved it; some people hated it," Adams explains. After two years of use, NHL ratings were down and the puck was dropped.

"For the hard-core hockey fan, they felt that it was over the top," Adams says. "If we ever did it again, we'd be a lot more subtle about it; we'd do it in replay."

Next Up: Soccer. Maybe

It's easiest to come up with virtual enhancements like these for sports like football or NASCAR, because they provide lots of equipment to tack sensors to. It's not so simple for games with mostly bare skin and movement, like basketball or soccer.

That last sport holds particular appeal for the company, but the challenges for soccer go beyond the technical side.

"As a businessperson, I'm obviously attracted to the thought of enhancing soccer, because it is the world's biggest sport, clearly. And from our perspective, there's been very little done to improve the quality of that broadcast. They have been doing the same way for 50 years in that sport," Adams says.

"In fact, when we took our technology over and said, 'Hey, we can track the players and put virtual off-side markers and arrows down to certain players and show you things in real time,' the European broadcasters put their arms up and said, 'Oh, we are never going to do that crazy stuff you Americans do.' "

But, Adams points out, people "screamed and yelled and rebelled" when a score box was first added to screens in the United Kingdom a couple of decades ago.

"And lo and behold, now you can't see a game in any sport that doesn't have the live score on," Adams says. "Now, of course, it's just the fabric of what we see. So I think [the soccer leagues'] attitudes are changing there as well."