Accessibility links
March Of The Indies: The Punk Rockers Of Video Games : All Tech Considered Video games are increasingly seen as a deep, artistic medium, as much as a form of entertainment. But behind the big-budget behemoths of the video game industry sits the growing and expanding market of independent video games. These are games created by small teams and even solo developers. 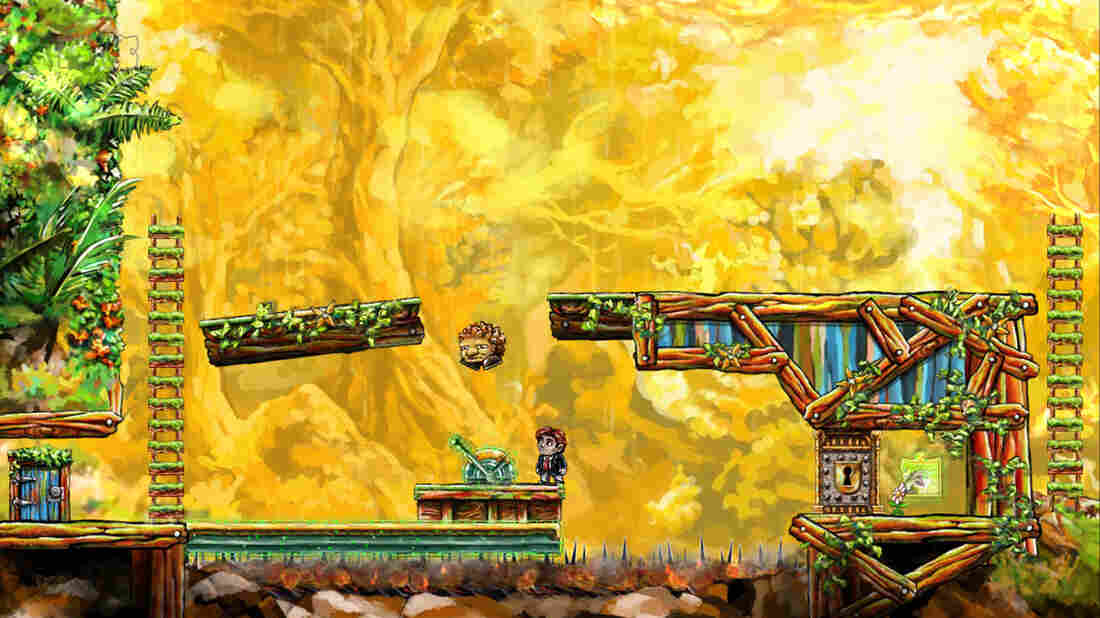 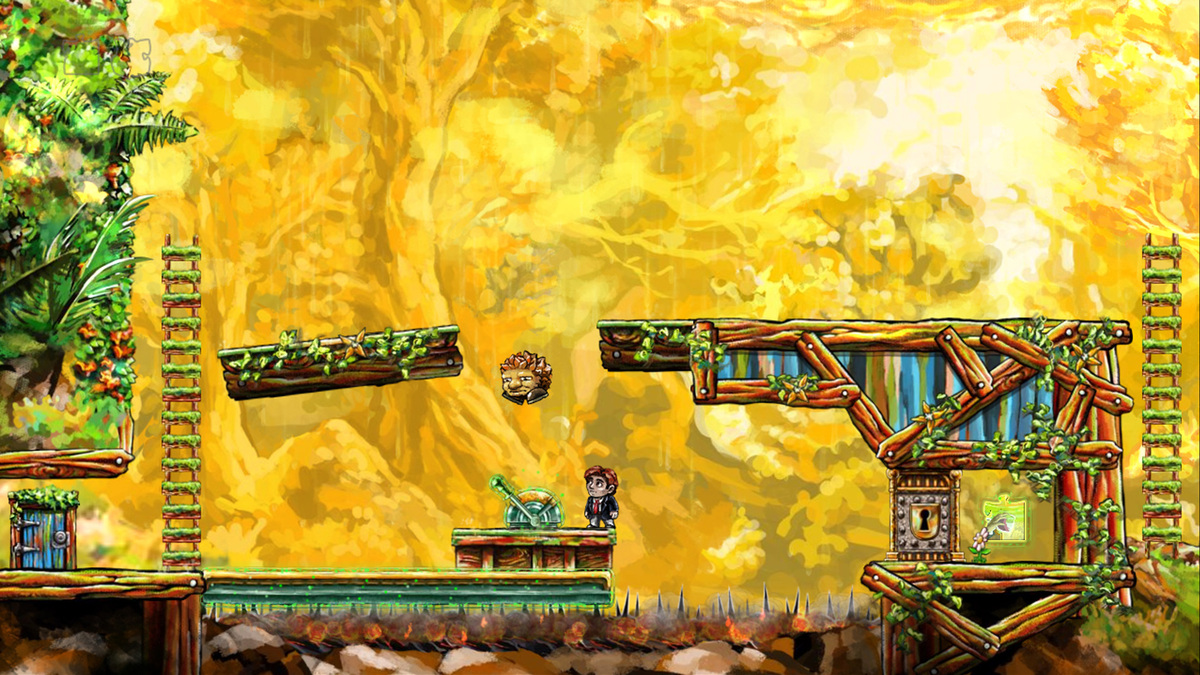 Editor's Note: There's no question that gaming culture has made a huge impact on the way we live. So this week, as we examine the evolution of video gaming, you'll be hearing a lot of stories on the topic. We're also going to give NPR gaming junkie Steve Mullis a space each week to analyze indie games — something that might not get the attention of, say, Grand Theft Auto, but makes us think a little harder about the future and deserves a look. Take it away, Steve:

Anyone with even a cursory interest in the video game industry already knows that it has exploded over the past two decades into a mainstream, multibillion-dollar business. Triple-A titles from the major developers and publishers like EA, Sony, Microsoft and Activision Blizzard often have production and marketing budgets that rival blockbuster films.

Video games are also being increasingly seen as a deep, artistic medium, as well as a form of entertainment. But behind the industry's big-budget behemoths sits the growing and expanding market of independent video games. As industry expert John Davison told All Things Considered host Robert Siegel on Monday, these are games created by small teams and even solo developers.

Like indie movies and music, these are games developed outside the gaming studio system — one that is not unlike the big-budget Hollywood studio system — often filled with creative control issues and executive intervention. Many of these independent games often get funded through sites like Kickstarter and Indiegogo.

This freedom of both financial and creative control has allowed indie developers to create games that buck the current trends, create new genres and put experimental titles on the market that challenge the conventions of an industry that often seems to produce the same games year after year.

While it's not to say that the big, triple-A titles like Bioshock Infinite, The Last of Us and GTA V don't have their merits, their massive sales and fanbase shows that they most certainly do. But indie game developers have shown that it is equally possibly to evoke emotion, tell a compelling story and be innovators with a small budget, a small development team and a lot of passion.

The spread of high-speed Internet, greater access to technology and development tools, as well as new digital distribution platforms like Steam, have allowed small developers to see their vision through and bring their games directly to consumers. With Sony and Microsoft also embracing indie games on their current and next-generation consoles (the PS4 and Xbox One), the audience and opportunity for small gaming studios is about to be bigger than ever.

Our aim with this feature is to shine a light on games from the indie market that significantly disrupt the conventions of the gaming industry, break new ground or are just amazing pieces of interactive art that should be experienced. We'd also like to hear suggestions about indie gaming gems you've found and enjoy or games that have had a significant impact on the way you view video games and the industry.

OK, so now that we have the introductions out of the way, let's check out some games. Below are just a small sample of indie titles that are a great introduction to what is out there and help illustrate what the indie gaming market is like.

Cave Story is considered one of the most well-known indie games of all time and one that helped launch the indie gaming market. The platform-adventure game began as a freeware title in 2004, but its popularity soon helped the game find its way to other platforms, with enhanced versions released as recently as 2012.

Created by game developer Daisuke "Pixel" Amaya, the adventure game is an homage to games Amaya played in his youth, most notably Metroid, but it has hints of the Zelda, Mega Man and Castlevania series. A labor of love, it took him five years to develop the original game, which he did in his free time.

In the game, you take the role of Quote, who awakens in a cave with no memory. As you explore the massive setting you uncover a plot by a character called The Doctor to conquer the world. Cue hero's journey to stop said conquering.

The depth of the story and game play, as well as the vastness of the adventure, is something that was unheard of at the time of its release for an indie title. Many saw it as proof that a single developer, with sufficient skill and passion, could create a compelling and rich action game.

From the title alone, you know you are in for something interesting. Super Meat Boy is a platform-style game, a popular genre in the indie gaming world, in the tradition of Super Mario Bros. But calling it just another platform game is like calling a Ferrari "just a car" or Daniel Day-Lewis "just an actor." The game is fast, furious and at times incredibly difficult.

The premise is simple: You are Meat Boy — a cube-shaped character who appears to be made of a squishy meat-type substance — out to save your girlfriend Bandage Girl from the clutches of the mechanical tuxedo-wearing Dr. Fetus. See, simple. You guide Meat Boy through multiple levels of hyperkinetic platform hopping and wall bouncing while avoiding various hazards along the way.

The magic of Meat Boy is that the difficulty, while substantial and at times bordering on the absurd, never feels cheap. It's almost perfectly balanced and increases gradually from level to level. Coupled with unlimited chances to retry each level (after your numerous and inevitable deaths), along with a near instant restart, and the action is just go, go, go until the final showdown to rescue your special lady friend.

Developed by Edmund McMillen and Tommy Refenes originally as a Flash game in 2008, the small indie title went on to sell millions when it was released on XBox Live and Windows. The game also received high praise for its art style and music, which matches perfectly the frenetic and fast-twitch game play. I think I picked this game up for $3 on sale, and it was worth every penny.

Minecraft is the juggernaut in the indie gaming room. Originally created by a single programmer, Markus "Notch" Persson of Sweden, the game has sold more than 30 million copies across PC, Xbox 360 and mobile devices since its release in 2011. The tale of the game's creation was even chronicled in a book released in October.

While you've no doubt heard of the immensely popular game, what it is exactly might still be unclear. At its core, Minecraft is a sandbox-style, open-world creation and building game. It is LEGO 2.0.

You control your block-headed protagonist through an equally blocky world where you mine resources, craft items, dodge the occasional danger depending on the game mode and build things to your heart's content. There are no specific goals, no beginning and no real end. Technically there are some boss monsters in the game, but you can easily choose to ignore them as you build your cottage, castle or Starship Enterprise.

Through that simple premise, players have gone on to create mind-blowing creations using millions of the 1-meter cubes you acquire from gathering resources. To name just a few: King's Landing of Game of Thrones fame, massive city replicas, a built-to-scale version of the Battlestar Galactica and even a giant, programmable piano. The only real limit it seems is the amount of time players have to invest — and their imaginations.

While not a game in the traditional sense, Minecraft is an amazing set of tools for people who want to build and tailor a unique gaming experience to their play style.

At first look, Braid seems like another 2-D platform puzzler where you stomp on lateral-moving enemies while on an adventure to rescue yet another princess. Well, if it were that simple we wouldn't be talking about it nor would it have won so many awards.

You play Tim, a dapper fellow in a coat and tie, as he explores a beautifully painted world — brought to life by artist David Hellman — solving puzzles and collecting trinkets. The unique game play element in Braid is the manipulation of time. Across the six worlds of the game you have unlimited use of an ability to rewind, slow, advance and alter time — depending on which world you are in — to help you survive. Miss that jump and fall to your doom? Simply press the button and the game rewinds to where you were, ready to correct your mistake.

It's this process of playing with time and learning from your errors that makes playing Braid so interesting. It really gets you thinking about how your character, and by extension you the player, interacts with the world.

The other thing that sets Braid apart is the story, though often vague, which is revealed through pre-level text and items found throughout the game during Tim's quest. Without spoiling anything, let's just say it's not your typical "hero rescues princess" story. Themes of desire and forgiveness permeate the journey, and if you get to the end you will definitely be surprised.

Despite its use of some standard video game tropes, the game is actually creator Jonathan Blow's critique of trends in the industry and of game development. The game's story and meaning has also been subject to dissection and heavy analysis by bloggers and gaming journalists. It was even referred to as a "punk rock" video game in a Rolling Stone article for its bucking of gaming conventions, like the Sex Pistols did with music.

Like every other person writing about games on the Internet, I highly recommend checking out Braid. It is a pleasing and surprisingly deep gaming experience. Blow aims to create another unique experience with his next project, The Witness. We'll be watching.

Steve Mullis, an associate Web producer at NPR, has been a gaming enthusiast since the first time he fired up an Atari 2600. If you want to suggest an independent game worth featuring here, please write or tweet him.