Accessibility links
Is It The End Of The Line For The Landline? : All Tech Considered The U.S. landline network was once the best in the world. But these days, phone companies see them as a burden, an old technology too expensive to maintain. AT&T wants to start replacing the system with cheaper options. Some call it a hasty abandonment of the tried-and-true traditional network. 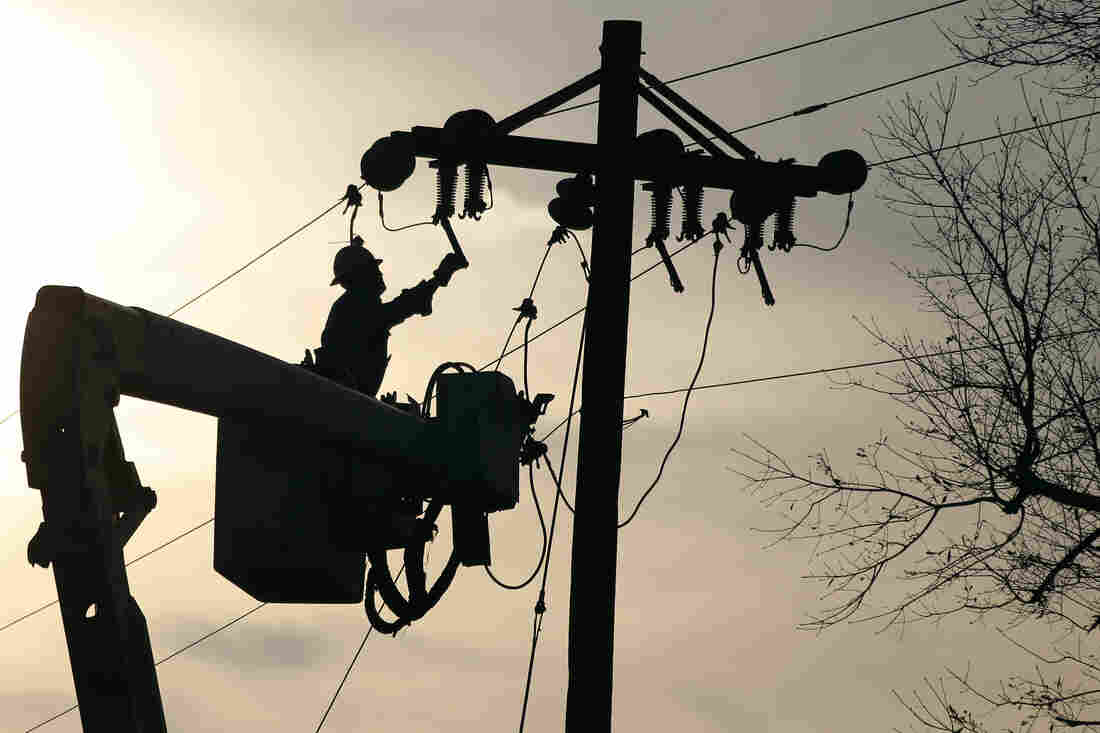 A lineman grounds a line on a replacement pole in McNeill, Miss., after 2012 Christmas day storms downed both telephone and electric power lines and poles throughout the state. Upkeep on traditional landlines is expensive, and some are pushing for relaxing requirements that phone companies maintain these lines. Rogelio V. Solis/AP hide caption 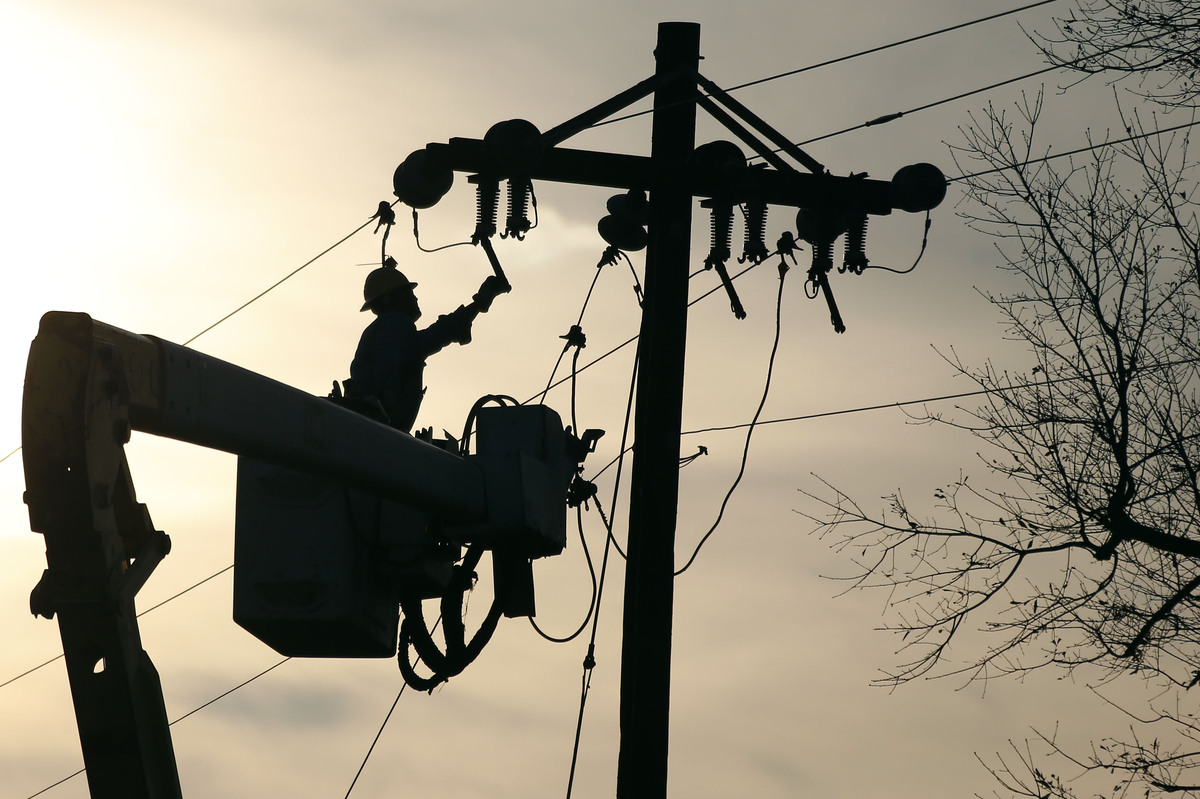 A lineman grounds a line on a replacement pole in McNeill, Miss., after 2012 Christmas day storms downed both telephone and electric power lines and poles throughout the state. Upkeep on traditional landlines is expensive, and some are pushing for relaxing requirements that phone companies maintain these lines.

America's traditional phone system is not as dependable as it used to be. Just last month, the Federal Communications Commission told phone companies to start collecting stats on calls that fail to complete. According to one estimate, as many as 1 in 5 incoming long-distance calls simply doesn't connect.

The problem may be in the way those calls are being routed — often via the Internet, which is cheaper. It may also have something to do with the gradual decay of traditional landline infrastructure.

Dan Newhouse, a farmer in eastern Washington state, hears that decay on his home phone every day.

"We live out in the country, it's a landline, and it's as good as it gets," he told me over the phone. "Anytime it rains, we wouldn't be able to have this conversation, because water gets on the lines and it gets way worse."

Repairmen have told him that the wires are just old, and they're too expensive to be replaced. He says the phone company seems to be allowing the whole system to deteriorate.

"The last time, the pedestal down at the end of our driveway, someone hit it and knocked it over," Newhouse says. "They straightened it up and wrapped it with electrical tape, and that was their fix."

More Families Pull The Plug On Their Home Phone

"The switches — the actual infrastructure — are reaching end of life," he says. "And, ironically, so too are the personnel, the engineers who received training to maintain those expensive switches."

Of course, these days, a lot fewer people pay for what the industry calls "plain old telephone service." Landlines used to be nearly universal; now only about 71 percent of homes have them. If this keeps up, the traditional "switched" phone system simply won't be able to pay for itself.

Frieden sympathizes with phone companies' reluctance to maintain the traditional system, but he says we should think through the consequences of letting them abandon it. We may miss it.

"This is old-school, but there are plenty of instances where the cable goes out, the electricity goes out and the phone network is there." Frieden says.

That's because traditional landlines have their own electricity and even battery power. Then there's audio quality: On Internet phones, your conversation competes for bandwidth with your neighbor's Netflix, and funny things can happen. If the audio is too compressed, it can sound "gargly." Or there can be latency — audible gaps in the sound.

And that's where the big debate is happening right now: Should the new forms of telephony be as tightly regulated as the traditional system was? As you'd expect, telecom providers say no. They don't want to see Internet and wireless phones bound by regulations such as "Carrier of Last Resort," the principle that a phone service must be available at prevailing rates even to customers who live in places that are expensive to serve, such as farms.

"Those [rules] were written at a time when consumers had no choice in the matter," says John Stephenson, director of the Communications and Technology Task Force at the American Legislative Exchange Council. That organization pushes for smaller government, and Stephenson says fewer regulations for Internet-based phones will lead to more investment in broadband Internet service.

"If we were to clear the underbrush of these rules written long before the Internet was even a word," Stephenson contends, "there would be a lot more broadband deployed to the United states, and things that are even better that we can't conceive of today."

ALEC has been quite successful, writing model legislation for states seeking to deregulate Internet phone service. Stephenson counts 29 states that have "modernized" their laws in this regard. But Harold Feld, senior vice president of the Internet and communications think tank Public Knowledge, says he's worried about the lack of government oversight on issues such as call quality.

"It's been this sort of, 'The Internet is magic and we don't want to look too closely at it,' " Feld says. "The problem is, it's not magic ... and when you just leave this stuff to its own devices, sometimes it breaks down."

The big test case may be AT&T. Last year, the company formally petitioned the FCC for permission to start transitioning away from traditional switched-circuit phone systems altogether and moving certain areas to all-Internet and wireless. The company says that it will offer high-speed Internet phone service or high-speed LTE wireless to 99 percent of its territory by 2014.

It's that final 1 percent that worries Feld. He says he has no illusions about preserving the old switched phone system, and he welcomes the prospect of better technologies.

"What we don't want to see, though, is a phone system that was the envy of the world [go] away, and [become] a system that works well if you're in the right place and you can pay for it, and works poorly if you're not," Feld says.

Feld uses a medical analogy to describe what our phone system is going through right now. He calls it "network neuropathy," a sort tingling sensation at the extremities, in the form of dropped calls and bad audio. He hopes it's just a passing symptom as the old phone system is abandoned for the new.