Accessibility links
For Advocacy Groups, Video Games Are The Next Frontier : All Tech Considered As video games become more mainstream, some social action organizations are using them to raise awareness or raise funds. They advocate for a range of causes, from the struggles of women in the developing world to the effects of power in Congress. 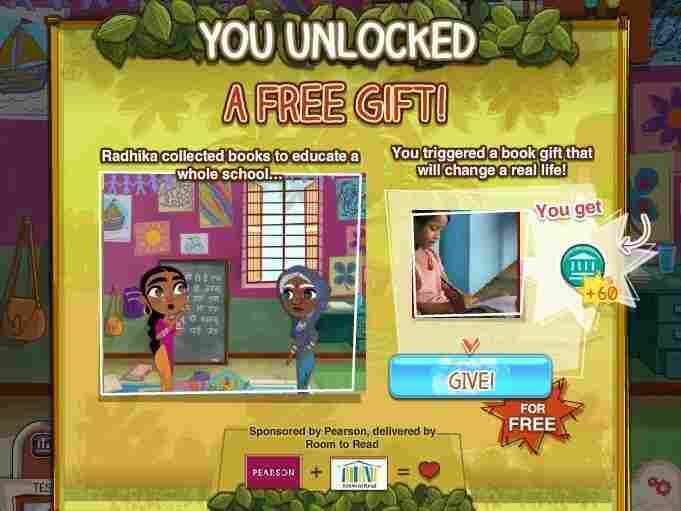 A screenshot of Half the Sky, where virtual successes sometimes lead to real-life donations. Games For Change hide caption 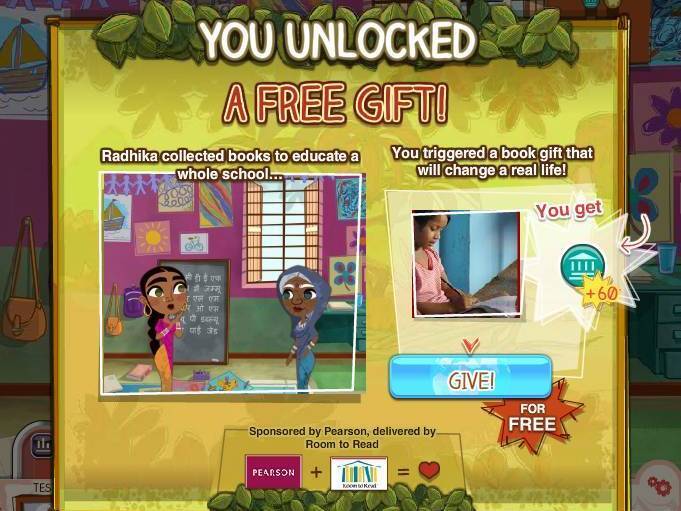 A screenshot of Half the Sky, where virtual successes sometimes lead to real-life donations.

Movies and books have long been used to advocate for causes, such as climate change or breast cancer. As video games become more mainstream, advocates are beginning to see how this art form can be a new way to reach out and get people engaged in a cause.

Take Half the Sky, a book about the struggles of women and girls in the developing world. Teacher and mom Suzy Kosh read it in her book group. When she heard there was a Facebook game based on it, she checked it out, and her 6-year-old son noticed.

"He got on my lap, and I started explaining it to him, and then he was so intrigued that we kept playing," she says. "You were going and helping people and saving people, and he was really interested in doing that."

The game puts the player in the shoes of Radhika, a poor woman in India who lives on a farm. As Kosh plays with Dylan on her lap, Radhika's goat gives birth.

"Remember what happens when they have a baby?" Kosh asks Dylan. "How does that help everybody in the community?"

"Oh, that's right! It's a good source of food, isn't it, and then they can sell the milk or sell the baby goat, and then more people can get milk," she explains.

Kosh thinks playing the game is teaching Dylan a lot more about what it's like for women in the developing world than a book would.

"He's not just reading about somebody doing something — he's helping the characters do their actions, he's helping make these things happen," Kosh says. "This generation, it's all about the interaction. This makes it alive for them."

The idea of turning Half the Sky into a game came from the authors of the book, Pulitzer Prize-winning journalists Sheryl WuDunn and her husband Nicholas Kristof, who — like a lot of parents — learned about games from their kids.

"Usually my main connection with games is telling my kids not to spend so much time playing them," Kristof says.

But Kristof also saw an opportunity. He realized that people who buy his book probably already care about the topic. He made a PBS documentary but again he realized that was a limited audience.

"We thought that, really, the gateway drug might be an online game that is not didactic, not threatening and that people might just connect with almost by accident," he says. "Once they're exposed to these issues, it might reel them in."

Kristof is not a gamer, so he had to enlist outside help. He turned to an organization called Games for Change, which brings together people who want to use games to promote humanitarian causes. Asi Burak, the president of Games for Change, says it's a challenge to take serious causes and turn them into a game.

"Because it's a game, it needs to be accessible," Burak says. "It needs to be compelling. It can't be all heavy and serious and tragic."

Working with developers, Burak brought Half the Sky to life by creating the character of Radhika from a composite of women in the book. Radhika wants to send her daughter to school but can't get the money from her husband.

"She decides to take care of her daughter and get the money herself," Burak says. "From that point on, she goes on a whole journey through five countries and she ends in the United Nations in the General Assembly, and she makes a speech."

The game play involves Radhika building a business to help other women, some of whom have been sold into prostitution.

Kelly Arthur, who got her 11-year-old son interested in the game, says she might be uncomfortable having him read a book or watch a film about these issues.

"It's in-your-face reality, which I want them to know about but maybe not in such a horrific [way], as you see sometimes in the films," Arthur says. "This just makes it seem like you can raise the questions and start the dialogue in a less threatening and scary way."

Arthur's son Braedon says what he really likes about the game is that his success triggers donations to real-world organizations.

"It does actually affect the world 'cause you can get certain points in the game where that does happen," he says. "And so even though you are doing a game, you already are making a change."

If you succeed at certain tasks, the game triggers donations through partner charities. For example, the game has donated a quarter-million books. Players can also use real money to purchase virtual items — and that money has brought in more than $450,000 in charitable donations.

Since it launched nearly a year ago, more than 1.1 million people have played Half the Sky. Though that's nothing compared to a game like Farmville, still it makes Half the Sky one of the most successful advocacy games.

Sam Roberts, of the University of Southern California's Interactive Media and Games Division, says as the gaming generation grows up, advocacy games will too.

"Young people tend to be more engaged with new technology. It tends to be more sort of a part of their parlance," Roberts says. "So I think that in 10, 15, 20 years, the reason we're going to have a lot of advocacy games is because it's how people engage in sharing ideas and thought."

Among the advocacy games Roberts has seen: A game that criticizes multinational corporations by letting the player run one (and have to choose between profits and lower wages), and a game that lays out the process and impact of congressional redistricting.

Kosh says Half the Sky also presents her 6-year-old son with an alternative to the way women are portrayed in so many of the big video games.

"The girls are heroines, too. They're brave and they fight for what they need and they help each other," she says.

And through playing the game, Kosh and her son know they've helped some real women too.