Accessibility links
Could A Tech Giant Build A Better Health Exchange? Maybe Not : All Tech Considered Since the rollout of HealthCare.gov, many have wondered whether a private company could have avoided the federal site's many pitfalls. Oregon took that route, hiring Silicon Valley titan Oracle to create its state insurance exchange. But two months after its scheduled launch, the website is still not working. 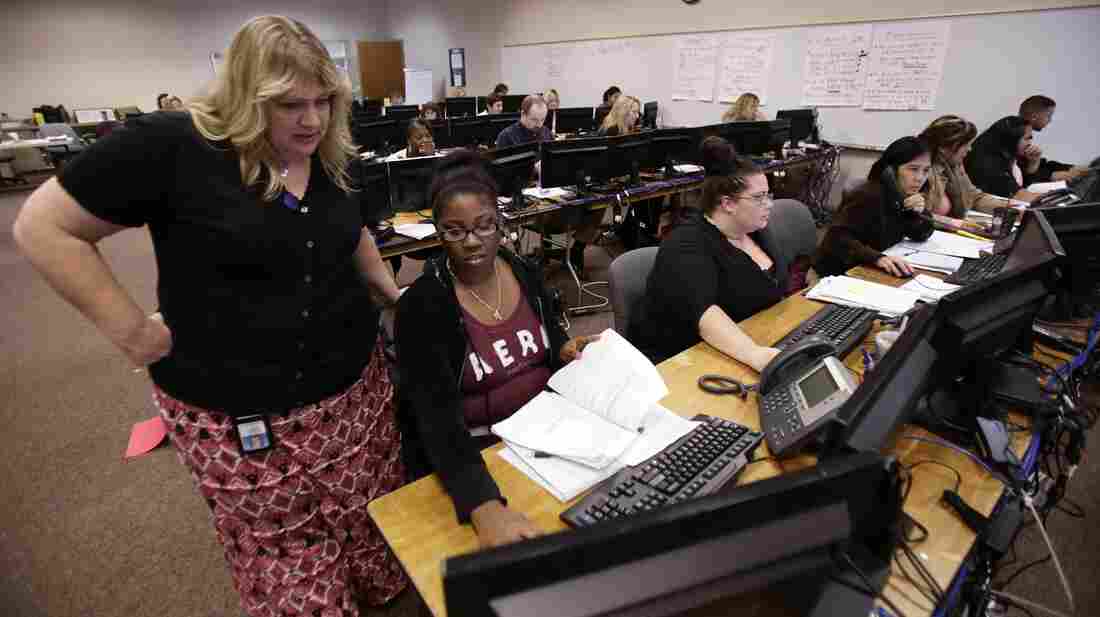 Workers process applications for Oregon's health exchange program. The state paid tech giant Oracle to build its online exchange, but with the site still not functional, people shopping for insurance have been forced to apply on paper. Don Ryan/AP hide caption 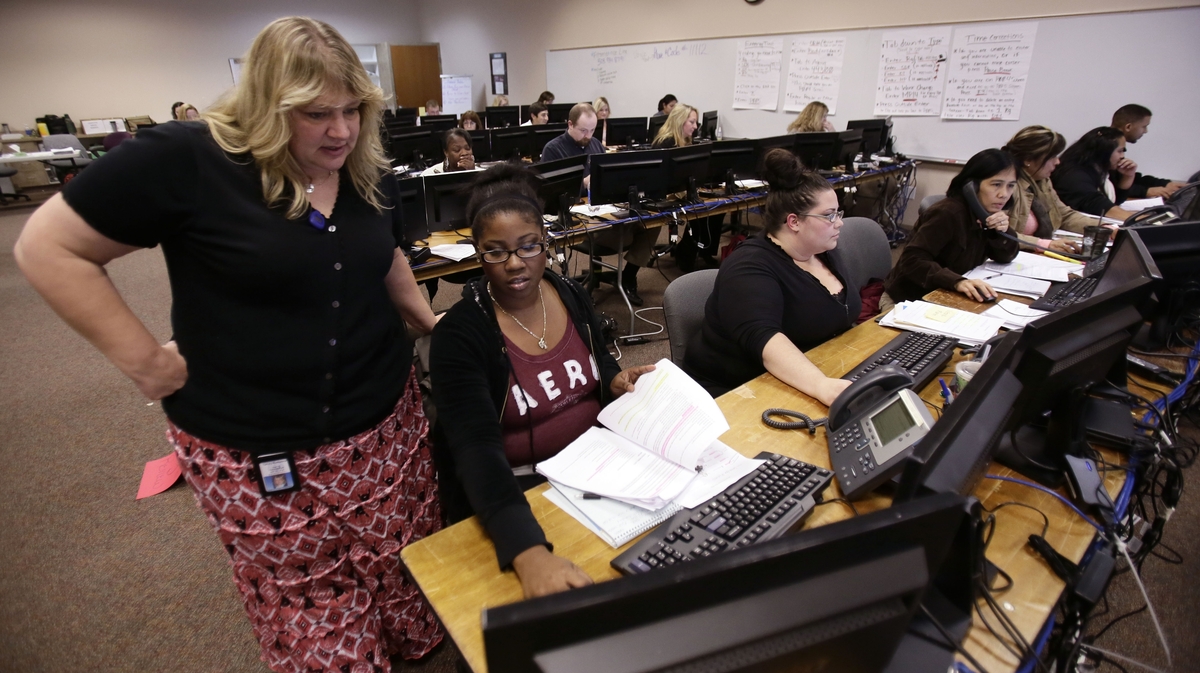 Workers process applications for Oregon's health exchange program. The state paid tech giant Oracle to build its online exchange, but with the site still not functional, people shopping for insurance have been forced to apply on paper.

Oregon has spent more than $40 million to build its own online health care exchange. It gave that money to a Silicon Valley titan, Oracle, but the result has been a disaster of missed deadlines, a nonworking website and a state forced to process thousands of insurance applications on paper.

Some Oregon officials were sounding alarms about the tech company's work on the state's online health care exchange as early as last spring. Oracle was behind schedule and, worse, didn't seem able to offer an estimate of what it would take to get the state's online exchange up and running.

"It is the most maddening and frustrating position to be in, absolutely," says Liz Baxter, chairwoman of the board for Cover Oregon, the state's online exchange. "We have spent a lot of money to get something done — to get it done well — to serve the people in our state, and it is maddening that we can't seem to get over this last hump."

Falling Back On Paper Applications

Oregon had an ambitious goal: to create a place where anyone, from Medicaid recipients and small-business owners to people in the individual market, could go to shop for insurance. "In hindsight — which is always wonderful — we made decisions that made our system much more complicated to build," Baxter says.

Initially, Oracle promised it could get the job done. But by mid-May, the head of Cover Oregon, Rocky King, had written the company, pleading for "a simple calendar schedule ... to ascertain whether or not we will be able to deliver" a working exchange by Oct. 1.

Five months later, when Oregon's exchange was supposed to go live, the site still didn't work. And as recently as two weeks ago, the state had not yet managed to sign up a single person for private health insurance under the federal Affordable Care Act.

In desperation, Baxter says, Cover Oregon hired hundreds of temporary workers and cobbled together an application based on paper — currently the only way to apply.

Uninsured Fret About Getting Health Coverage By New Year's Day

"It's very easy try to envision you can automate a paper process," Baxter says. "[But] it's been very complex to take this ... complicated online system that we've been building and turn that into a paper process."

David Kline, an author and freelance journalist with a wife and two young children, is dealing with the fallout. A Portland resident, Kline is self-employed and eager to shop for new health insurance coverage on Oregon's exchange.

"It costs a lot of money to buy your own insurance," he says. "We spend about $25,000 a year on insurance premiums, copays, unreimbursed expenses. That's a lot of money. Some people can live on that."

Kline quickly realized that he could buy better insurance for less on Oregon's new exchange, but signing up hasn't been easy. After realizing that the website was hopeless, Kline tried applying by paper. But he soon realized the paper application had flaws that made reporting an accurate income impossible. Then he wrote an op-ed — and was soon promised a fix — but says he hasn't seen one.

"I just downloaded the [new] application this morning ... it's the same application," he says.

Coming Down Past The Wire

Originally, Oregon had hoped that Kline and tens of thousands of others would be able to do all of this online. The state hired Oracle to make that possible and has paid the company $43 million so far. But Oracle has missed deadline after deadline.

Now, Cover Oregon is telling its citizens who need insurance that they need to get their paper applications postmarked by Dec. 4 — this week — to get coverage by the beginning of 2014. They'll then need to finish the process and pick a plan by Dec. 15.

Oracle is now telling state officials that the website should be up and working by Dec. 16 — one day after the deadline.

King, the executive director of Cover Oregon, announced Monday that he will resign, citing health reasons. But there is little hope the state will get its money back from the tech company.

Baxter says there will be investigations into what went wrong and Oracle's responsibility. But for now, she says, she's trying to focus on Cover Oregon's mission. "We have tried very hard to [be] clear that our goal is about coverage."