Accessibility links
Brothers: A Grand Adventure With An Emotional Punch : All Tech Considered In Brothers: A Tale of Two Sons, siblings journey to find a cure for their ailing father. Their adventure begins in their tiny village, but they soon find themselves traversing a vast, beautifully rendered world flecked with the dark notes of Grimm and filled with fairy-tale-like characters.

If ever a video game sought to mimic the experience of sitting down and reading a simple and emotional fairy tale, Brothers: A Tale of Two Sons by Starbreeze Studios would be that game. And it's in that context that the game knocks it out of the park.

Brothers, available on Xbox Live, PC (Steam) and PlayStation Network, tells the story of two siblings on a journey to find a cure for their ailing father. Their adventure begins in their tiny village, but they soon find themselves traversing a vast, beautifully rendered world flecked with the dark notes of Grimm and filled with characters influenced by classic fairy tale mythology.

The game employs a unique control scheme that has you guiding each brother simultaneously as they explore the world. You use the left control stick to control the older, stronger and level-headed brother, while the right control stick moves the younger, somewhat mischievous sibling. The left and right shoulder triggers act as action buttons that allow the boys to flip switches, pick up objects and otherwise interact with the world. 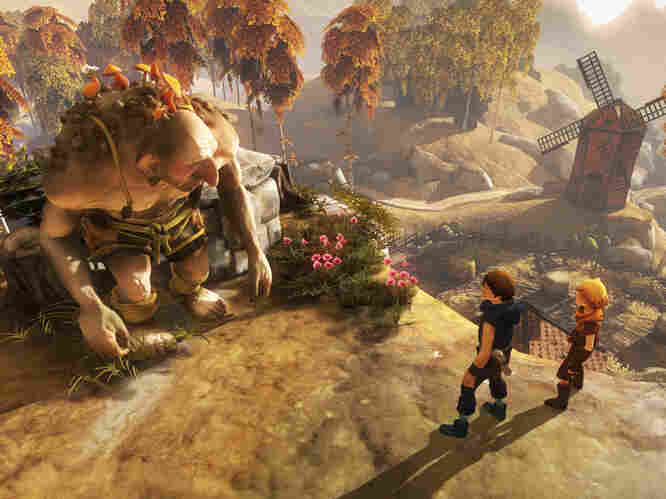 The titular brothers of the game encounter a troll, one of the many colorful characters they meet on their grand adventure. Starbreeze Studios hide caption 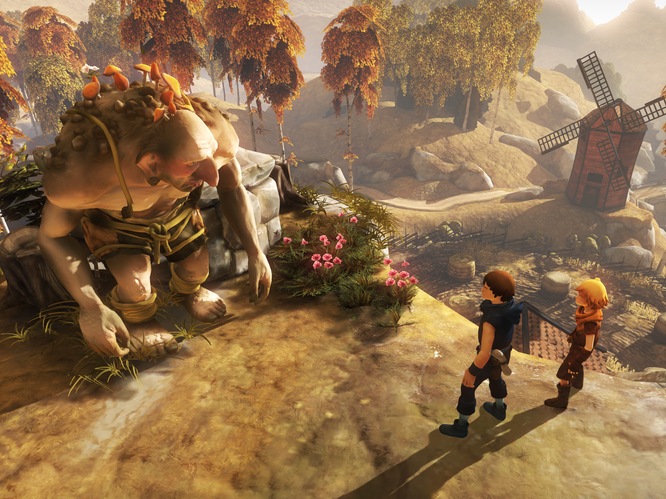 The titular brothers of the game encounter a troll, one of the many colorful characters they meet on their grand adventure.

The control scheme creates the unique feeling of a multiplayer co-op game, but with only a single player at the controls. It takes a bit of getting used to, especially when the brothers are on the opposite sides of the screen as the hands controlling them, and your brain seizes up a little. But it is not really a problem, and at times it even makes the gameplay all the more compelling.

The emotionally charged story unfolds at a slow yet efficient pace. Never do you feel rushed or hurried. Along the way there are even benches where you can plop the boys down to just gaze out over the gorgeous landscapes and underground labyrinths. If you haven't figured it out by now, the game's art style looks amazing. I can't really stress that enough. But don't linger too long; after all, dad needs saving.

Over the course of the boys' trek, you learn more about their personalities and attitudes through gestures and an imagined fantasy language that sounds somewhat like The Sims. Even without spoken dialogue or text, you understand what is happening, what each boy wants, their fears and the relationship between the two brothers. And not using actual dialogue makes the game immediately accessible to speakers of all languages, a brilliant move by the developers.

The amount of emotion, attitude and narrative complexity that is conveyed without spoken words is an accomplishment all its own. Even though you never learn the names of the two boys, you feel like you know who they are by the end. In my head, I named the older one Dirk and the younger one Kyle. Again, it was a great move to leave details like that to the player, as it adds another unique layer of immersion.

I would be lying if I said the puzzles the boys have to solve along the way are anything but easy. With the exception of a few rope-swinging segments and a flying portion, I never felt really stumped. But in a game like this, that's OK. The puzzles were still satisfying to solve and in balance with the sparse and delineated nature of the rest of the game. They are befitting of the world the boys inhabit, and anything else would have seemed out of place.

The key word here is balance. The game doesn't try to hide its story behind its unique gameplay, nor does it let the story overshadow the fact that you are in fact playing a game. All of its parts work in harmony with one another to a degree that I have not seen in a long time.

Another thing worth noting, and which some critics have knocked the game for, is the brevity of the actual game and its linear story. While I agree that the game is surprisingly short — at most two or three hours of playing time — it fits with the entire style of the game. And though the story does have some charming deviations, like saving a group of baby turtles and making a white bunny fit in with its darker brethren, it is fairly straightforward. But it is meant to be because that's how simply little fairy tales like this are told. "Little Red Riding Hood" never had any side quests. It was grandma's house or bust.

Now, there is not a lot more detail I can go into without spoiling much of the game's story. But I will say that at the end of it all this game stuck with me. It took me on an emotional ride that ends with the same satisfaction you get from finishing a really great short story. As for the end, I'll just say one thing: "Niagara Falls, Frankie Angel."

So if you like games that can draw out emotion from even the coldest gamer's heart, or just want a break from the general shooting and pillaging of other games, Brothers: A Tale of Two Sons is definitely worth a look.

Steve Mullis is an associate Web producer at NPR. His brother always made him take a dive at the end of Double Dragon. If you want to suggest an independent game worth featuring here, please write or tweet him.