Accessibility links
Microsoft Not Developing A Bra To Stop Overeating, After All : All Tech Considered News that Microsoft was making a "smart bra" with sensors in it to stop women from overeating was too good to be true. But researchers say they're exploring sensor bracelets so that men too could potentially get alerts to stop them from emotional eating.

Microsoft Not Developing A Bra To Stop Overeating, After All

Microsoft Not Developing A Bra To Stop Overeating, After All 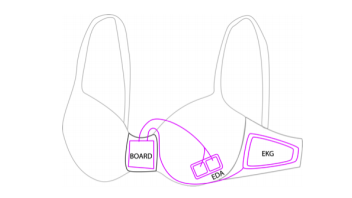 Researchers developed a prototype for a bra sensing system that would read users' emotions, but Microsoft says it won't be developing this product. Courtesy of Microsoft Research hide caption

The new reality with the light-speed pace of online news sharing is that news doesn't have to be true for it to go superviral. Sometimes stories are too good to verify, too fun not to share. The New York Times delved into this with a much-tweeted piece this morning.

So it is not altogether surprising, but still a little disappointing, to learn that Microsoft won't be developing a smart bra to stop us from overeating, after all. It was just a few days ago when the ladies of the world were rejoicing (read: not really) to learn that researchers at Microsoft were developing a smart bra that alerts women to their stress levels so they could avoid "emotional overeating."

The BBC reported on its blueprint, which "contains removable sensors that monitor heart and skin activity to provide an indication of mood." The bra (hypothetically) would take your EKG and feed it to a smartphone app. The app would then advise whether to avoid the refrigerator based on your stress levels.

Your tech bloggers were fascinated by this and reached out to the researchers who created a prototype and wrote a paper on the possibilities of this wearable technology.

But instead of getting an interview, we heard from a Microsoft spokesman who did not want to be identified, saying there have been "inaccuracies reported in multiple media outlets," and he's correcting the record with this note:

"The bra sensing system is just one instance of a class of work from a group of Microsoft researchers who are focused on the broader topic of affective computing, or designing devices and services that are sensitive to people's moods and react accordingly. While we will continue our research in affective computing, Microsoft has no plans to develop a bra with sensors."

Bummer on the bra, and a bigger bummer for the veracity of shareable online news. But not all hope is lost for wearable tech in bras — the breast cancer detection bra is still out there, at least according to CBS News. And the Microsoft research does continue.

And the researchers who created the smart bra prototype noted that they were moving from sensor bras to sensor bracelets so that men too could potentially get alerts to stop them from emotional eating.