Accessibility links
Hackers? Techies? What To Call San Francisco's Newcomers : All Tech Considered Linguist Geoff Nunberg lives in the Mission and says young tech employees have been pouring into the neighborhood. But what to call these new residents? He says the term "techie" used to suggest a computer whiz with no social skills; now it suggests one with no social conscience. 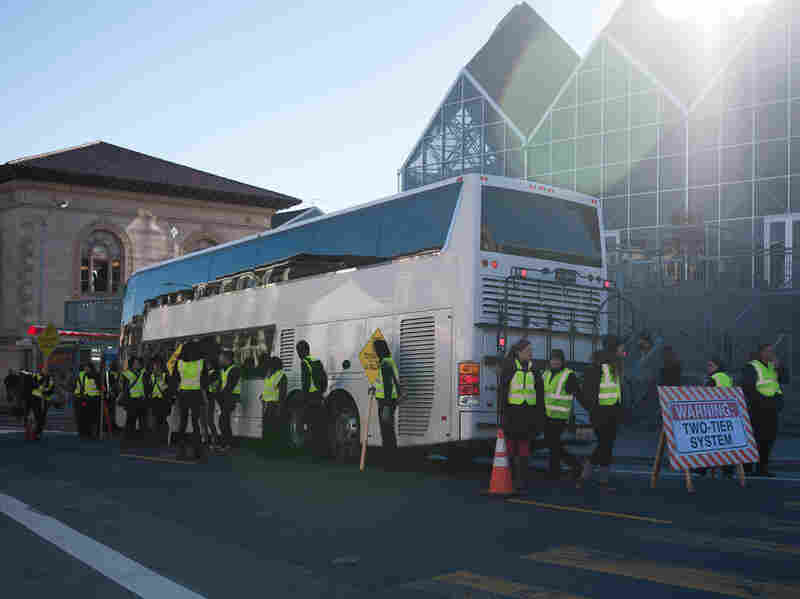 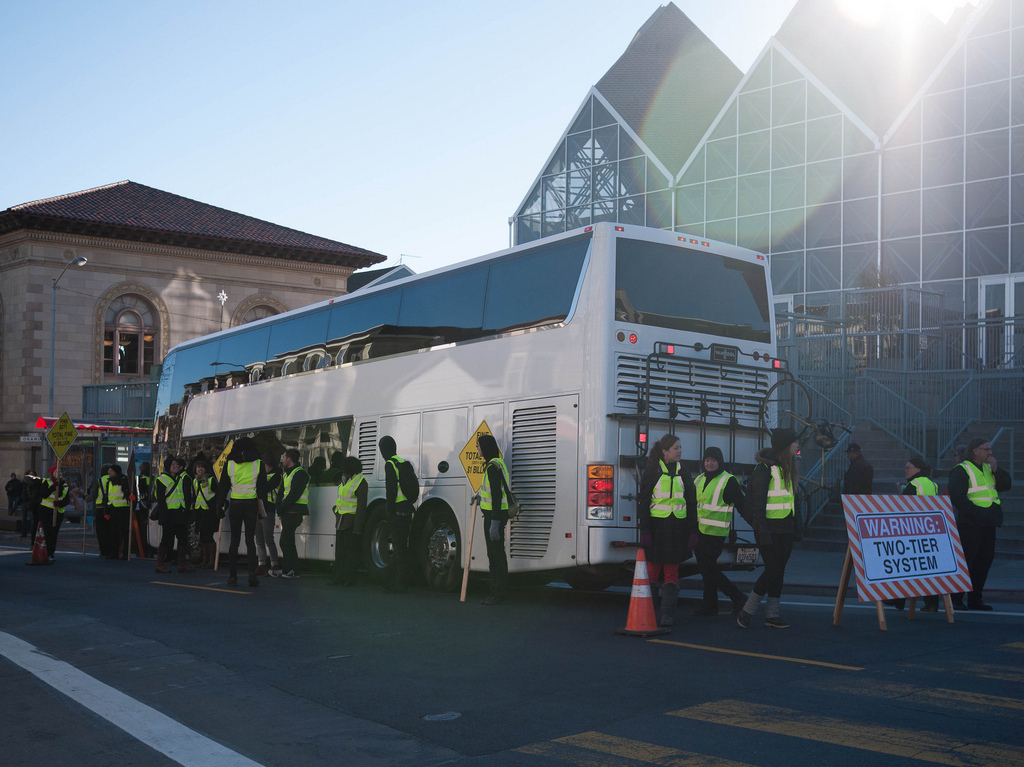 Protesters in San Francisco block a Google bus, which shuttles employees from the city to its location in Silicon Valley.

"There goes the neighborhood." Every so often that cry goes up in San Francisco, announcing a new chapter in American cultural history, as the rest of the country looks on. There were the beats in North Beach, then the hippies in the Haight, then the gays in the Castro. Now it's the turn of the techies who are pouring into my own Mission neighborhood, among other places. Only this time around, the green stuff that's perfuming the air is money, not weed.

Locals are agitated over soaring rents and the changing urban landscape, as used bookstores yield to cafes full of people punching out business plans on their laptops. But the most heated protests and discussions have focused on the buses that shuttle 18,000 tech workers from San Francisco to their jobs at Google, Apple, Facebook and other companies. People call them all Google buses, because they're hard to tell apart — oversized Wi-Fi-equipped luxury coaches, usually gleaming white, which scoop up their passengers at transit stops like something out of Close Encounters of the Third Kind. You couldn't invent a more compelling visual symbol for the privileged and disconnected lives that the tech workers seem to live, cosseted behind smoke-tinted windows.

The buses aren't really the problem. They may be intrusive, but they also take thousands of cars off the freeways, and their riders are hardly tech millionaires. But the resentment here has as much to do with culture as economics. It has been fueled by a series of public remarks from tech figures complaining about everything from the "bitchiness" of San Francisco women to the transvestites who make it hard to get a late-night taxi. On Facebook not long ago, the CEO of the startup AngelHack vilified what he called the "dropouts," "trash" and "degenerates" on the downtown streets, saying that they don't realize that "it's a privilege to be in a civilized business district ... in one of the wealthiest cities in America."

That sounds a lot like the things they were saying about the hippies half a century ago. But this is really the post-industrial arrogance of people who have been assured that it was in the natural order of things that their smarts and energy would be rewarded with an eight-figure payout while they were still young enough to be on their parents' health insurance. And not surprisingly, this has tended to darken the public's attitude toward the techies, not to mention the word "techie" itself. I still use it as an amiable label for the nerdy guy who comes to my office and rolls his eyes when I ask why my computer won't talk to the printer down the hall. But these days a lot of people use the word as a disparagement that implies entitlement and self-absorption. "Techie" used to suggest a computer whiz with no social skills, now it suggests one with no social conscience.

Actually, though, the distinctive feature of tech culture isn't arrogance so much as a chronic obliviousness, which is why some tech people can't even understand the resentment they engender. The San Francisco Chronicle quoted the founder of one online retailer who compared the word "techie" to the slurs for other immigrant groups, like the Mexicans in the Mission. That prompted Sam Biddle of the Gawker site ValleyWag to suggest referring to the newcomers as "Software Americans."

There's a sign of that disconnectedness in "hackers," the name a lot of tech people prefer to go by. That accords with the original meaning of the word as an honorific for an ingenious programmer, and can be extended to other things — startups describe their marketing people as "growth hackers." But to the rest of the world "hacker" is only a pejorative for people who break into computer systems. Programmers insist that that's a misuse of the word. But once a word goes bad, you can get away with using it positively only within a closed group that's in on the game. Within tech culture, "hacker" has become a shibboleth that identifies one as a member of the tribe. It suggests a distinct subculture, and an indifference to what other people think — the private language of the nerds' table in the high-school cafeteria, where the kids cared more about being smart than being popular.

In December, All Tech Considered explored the San Francisco Bay Area and the way income inequality is affecting the region. Check out our series.

That hermetic subculture seemed to find its natural home in Silicon Valley, where it could flourish in industrious seclusion from the rest of the world. You could get lunch, a workout and a massage without leaving the corporate campus, then drive home at one in the morning without ever encountering anybody so different from you that they didn't also know that "hacker" could be a positive term.

Yet even so, more and more tech workers prefer to live in San Francisco. Hence the buses, and the new offices that companies like Twitter and Dropbox have opened downtown with city tax incentives.

This is where the clash of cultures begins in earnest. Right now the fear is that the city will become another Silicon Valley, only with better restaurants, higher rents and worse parking. There are signs of that already — the Mission is well on its way to becoming a techie theme park. But in its stubborn complexity, the city can also undermine cultural borders. It resists the reduction to algorithms, insists that you take it on its own terms. That's the source of its infuriating allure. As a former student of mine who takes the bus to his job at Google told me, "Why would I want to live in the Silicon Valley wasteland when I can live here?" I can't disagree with him. I lived in Palo Alto myself for a while. It's a nice place to raise a car.