Accessibility links
Brain Games: Move Objects With Your Mind To Find Inner Calm? : All Tech Considered "Hands-free" is taking on a new meaning. Games hitting the market use EEGs so you can move a toy helicopter with your mind or play the brain like a musical instrument. It's the stuff of sci-fi movies, but potentially with an added health benefit. 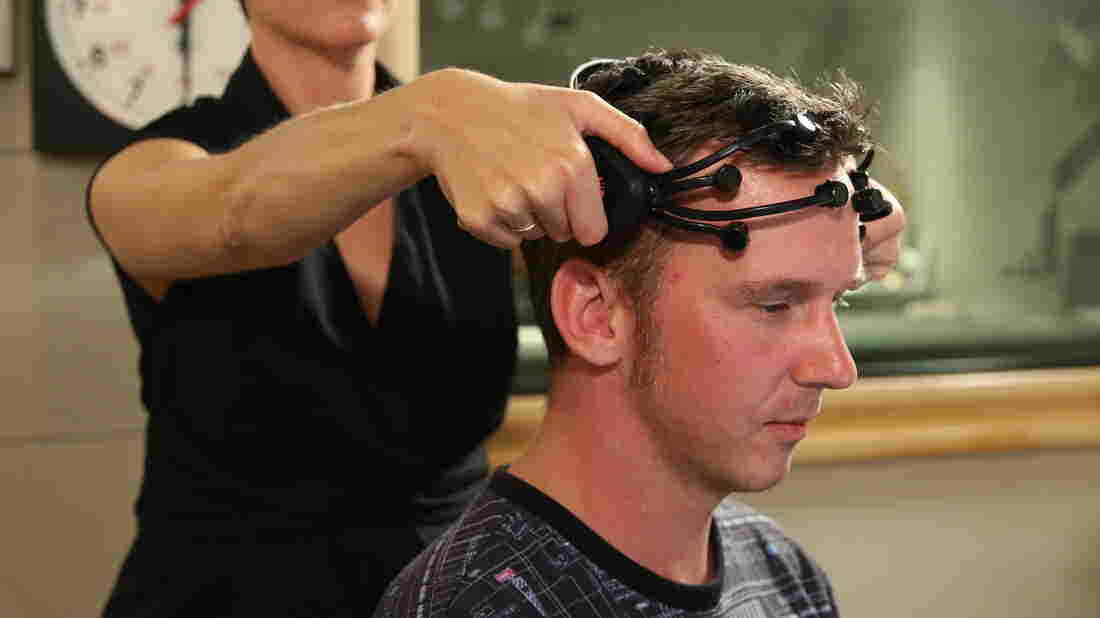 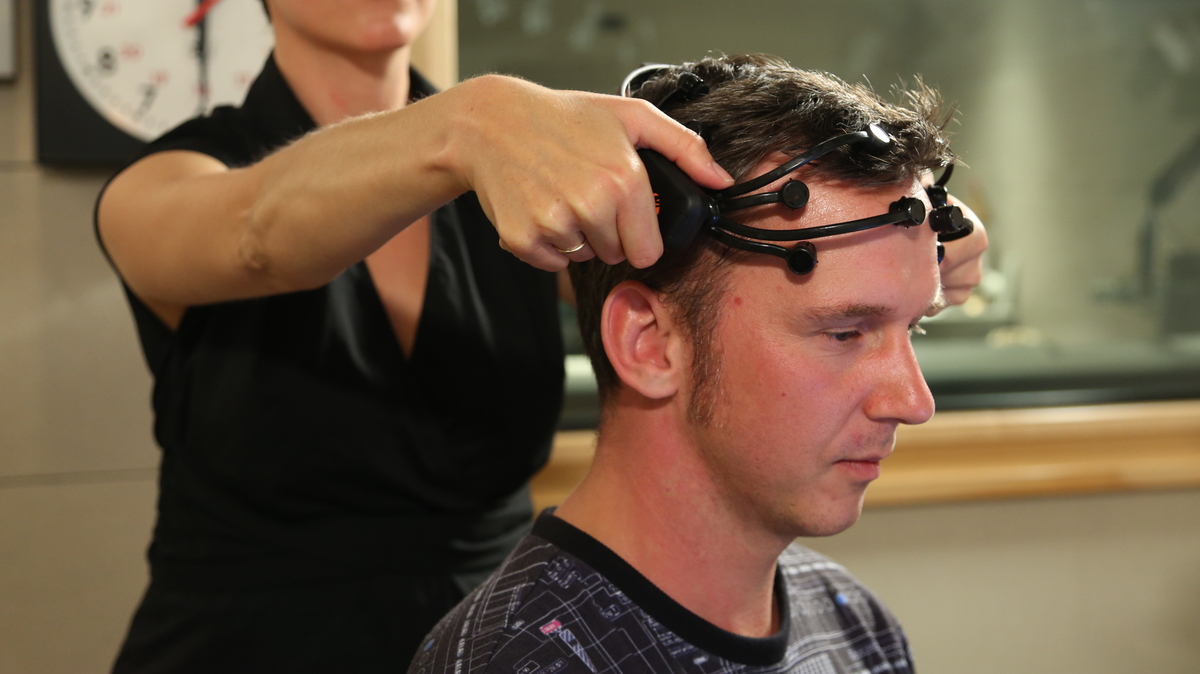 New commercial devices, using technology borrowed from the field of neuroscience, are making it possible to control objects with brain power alone. The idea is to help train users to become more focused — and relaxed.

EEG headsets, which detect electrical activity in the brain, were once found only in research labs. Today, the technology has become cheaper and easier to use. That's made it possible to connect EEG headsets to other consumer devices.

Recently, Johnny Liu, a manager for the San Jose-based company NeuroSky, came into the KQED studio to show off one such pairing: NeuroSky's MindWave Mobile headset, which costs under $100, and a toy called the Orbit brain-controlled helicopter, which retails for $190.

The helicopter is about 8 inches wide, with three small propellers, all enclosed in a black, circular cage.

Liu strapped on his EEG, short for electroencephalogram, headset to try it out.

Don't Call It A Mind-Meld: Human Brains Connect Via Internet

"I'm driving up my attention level," Liu explained. The more he appeared to concentrate, the higher the helicopter soared, levitating several feet above the tabletop. Then it abruptly crashed into my face.

Liu apologized, and then it was my turn. Focus on the helicopter "as if you actually had telekinetic powers," Liu told me.

But the helicopter stayed put.

The device was designed to train me to concentrate on one single thought as much as possible. Focused attention changes certain electrical patterns inside the brain. The EEG headset picks up those changes and, in turn, drives the helicopter.

Finally, I got the helicopter to fly. For about 3 seconds.

Another game — this one still in prototype — uses EEG readings to make music.

The NeuroDisco, designed by composer and inventor Richard Warp, allows users to "play the brain," as Warp puts it.

He fired it up for me recently in the KQED studio. "The beat is quite fast because I'm quite sort of excited," he explained somewhat apologetically.

But as Warp focused his mind, the rhythm receded and the notes got closer together. (You can hear the transition in this clip, below.)

As with the helicopter, the idea with the NeuroDisco is to train users to change their emotional state using what's called "neurofeedback." That allows you to see how your brain patterns are changing and then try to re-create them. It's a learning process that could train us over time to be more focused or relaxed, its promoters say.

Warp, who says he has always been an anxious person, wanted to create an environment where people could become more grounded, more "connected with their internal state."

He knows how funny that sounds, though. What about actually meditating, or just taking a walk? Do we really need more technology to help us relax?

"You're doing the same thing as a meditator, a Buddhist monk might do," Warp jokes. "But maybe we, in the West, need a device to do it."

Beyond meditation, these devices could be used for more than just helping you relax after a hard day. Some scientists see clinical applications ahead.

Adam Gazzaley, a neuroscientist at the University of California, San Francisco, thinks EEG games might one day help kids with attention problems learn to focus better.

Imagine, he says, a game that could help kids recognize when they're focusing and help them strengthen that ability.

"They put on a mobile EEG cap that helps guide the game so that it's challenging those [mental] processes that need the most help," Gazzaley says.

Technology may have made us more stressed and distracted. Maybe one day it'll be able to do the opposite as well.