Accessibility links
Putting The Brake On Who Can See Your Car's Data Trail : All Tech Considered Many cars can now track where we are, how fast we go and lots of other nuggets of information that can be accessed and mined. Some lawmakers and at least one car company say it's time to set some rules on driver privacy. 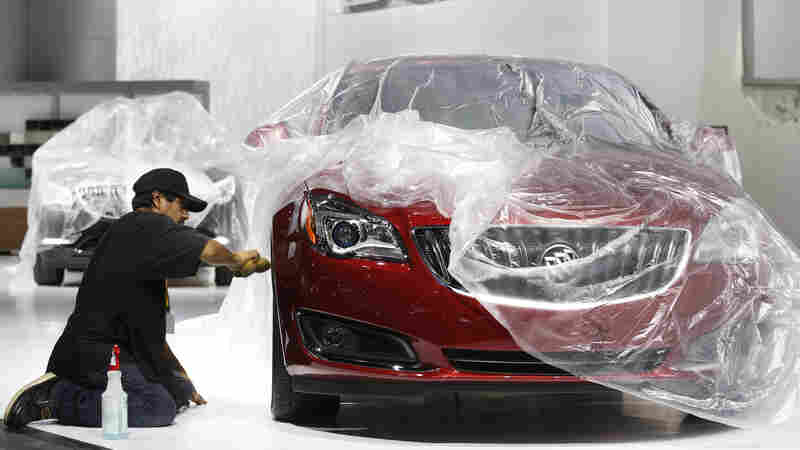 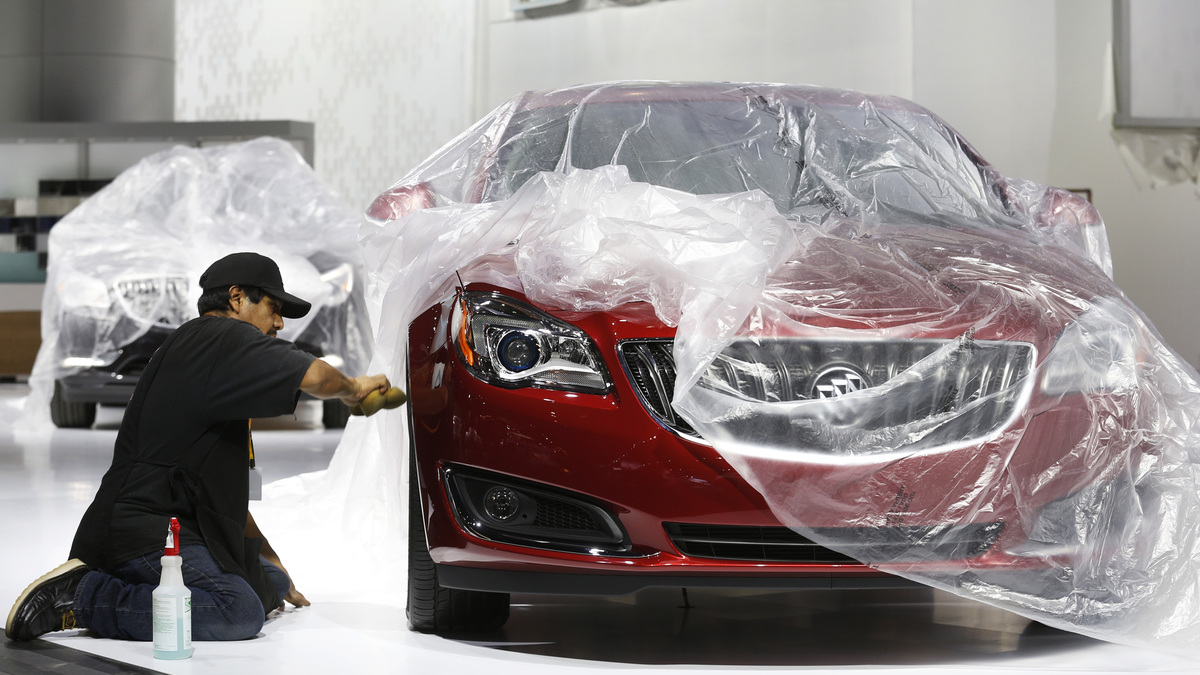 Auto show worker Jorge Martinez details a 2014 Buick Regal in preparation for display Jan. 11. The Regal is equipped with technology that senses a potential accident and slows the car automatically.

At the North American International Auto Show in Detroit this week, carmakers are happy to demonstrate the technology in their vehicles. A spokeswoman for Buick points out some of the safety features in the new Regal:

"Automatic crash preparation," she says. "Now we're actually able to help stop the vehicle in the event of sensing a potential crash, or at least reduce the speed."

And many new Chevrolets have a dashboard app that some of us in public radio are fond of: It lets you run any NPR station in the country on it.

But as technology goes, this is just the beginning.

Google has deals with several automakers to include its Android operating system in their cars by the end of the year. It will offer drivers apps and open the possibility that Google may be able to target ads to drivers or alert them to nearby shops and restaurants

It also means Google will be able to track drivers. But that's already happening with anyone who has an onboard navigation system, such as GM's OnStar or Ford's Sync.

Our cars already leave quite a data trail, says John Nielsen, an engineer with AAA.

Right now, there's not a lot of transparency around what data is being collected and stored...

John Nielsen, an engineer with AAA

"When you think of the services we get like mapping and routing around traffic jams or a notification that we're going too fast, you start to think about [how] our car can tell where we are, when we're there, if we're exceeding the speed limit," he says. "Cars just have a lot of data. They really look at everything you're doing."

A recent report by the Government Accountability Office found that many companies collect those data and provide them to third parties for traffic instructions or research. It also found the companies' privacy practices were unclear, making it difficult for consumers to understand privacy risks.

Most drivers have no idea what information they're giving out about their driving habits, Nielsen says.

"Right now, there's not a lot of transparency around what data is being collected and stored, and I think that's the first thing that we need to look at is a benchmark: what's being done, what's being captured," he says.

He says consumers should also be given a choice in what happens to their data.

Newer cars also have onboard data recorders, like the so-called black boxes on airplanes. Our speed, direction and whether we're wearing a seat belt are fed into the recorder and continuously updated.

It's useful information to have in case of an accident, but it's not clear who can access it or what they might do with it, says Sen. John Hoeven, R-N.D.

"Right now, the event data recorder records the information on a continuous loop and it drops it on a regular basis but retains it in the event of an accident," he says. "And there's no restriction in terms of what it can record or how long or who has access to that data."

Fourteen states have passed laws giving drivers ownership over this kind of auto info. Hoeven, along with Sen. Amy Klobuchar, D-Minn., has introduced legislation to give drivers in every state the same protection.

"It provides that that is your information as the owner of the vehicle, and it cannot be released without your consent other than under very limited conditions," Hoeven says.

Other legislation has been proposed to protect the privacy of a driver's location. And at least one automaker thinks that's a good idea.

Ford CEO Alan Mulally told auto writers at the Detroit show that he supports government efforts to set privacy rules. He said automakers need to know where the boundaries are and have guidelines to operate them.