Accessibility links
How The Meritocracy Myth Affects Women In Technology : All Tech Considered The breathtaking lack of women in the tech industry has a real effect on one of America's most important economic and innovation engines. Join our running conversation on the cultural changes at play and what to do about it. 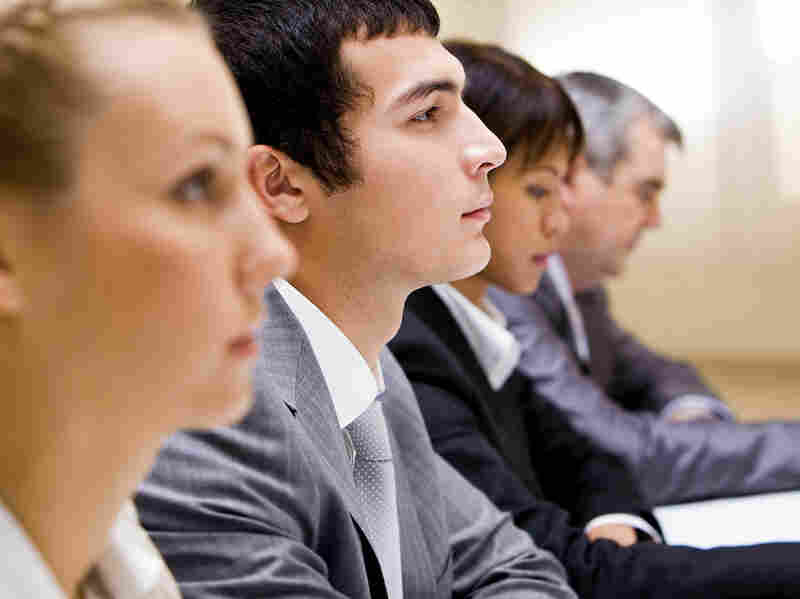 The gender gap in the tech industry will be the focus of a monthlong series on Tell Me More. iStockphoto hide caption

The numbers on women in the tech industry are so out of whack that ladies register in the single digits: Women account for just 6 percent of the chief executives of the top 100 tech companies, according to the National Center for Women and Information Technology. And a New York Times count found that only 8 percent of venture-backed startups are founded by women.

As NPR's Tell Me More host Michel Martin put it in our Facebook chat on this topic Thursday, "You can debate the why but not the what." The disparity of women in science and technology is real, and among girls in high school or younger, the numbers don't seem to be improving.

One of the most prevalent defenses against claims of gender bias and sexism in the tech industry is that Silicon Valley is a meritocracy, where the smartest, most skilled engineers and the best ideas rise to the top. Following this logic, the people with the most merit just happen to be almost all white men.

The reality is far more complex. Reuters recently analyzed the venture capital funding of startups in 2011, 2012 and 2013, and found they had one thing in common: a privileged pedigree. Reuters reports that the startup founders generally came from the traditional Silicon Valley "cohort":

"That means the founders had held a senior position at a big technology firm, worked at a well-connected smaller one, started a successful company already, or attended one of just three universities — Stanford, Harvard and Massachusetts Institute of Technology.

"The analysis ... generally supports academic research showing that tech entrepreneurs are substantially wealthier and better educated than the population at large."

The data also supported other claims of race, gender and class bias. But the myth of meritocracy prevails. "This mythology ... denies the role of personal connections, wealth, background, gender, race, or education in an individual's success," writes Alice Marwick, a professor at Fordham University. "If, for example, women (or people of color, or gay people) are not getting venture-capital funding at the same rate as men, the myth maintains, it is due to their lack of ability rather than institutional sexism. It also justifies immense wealth as the worthy spoils of the smartest and best."

It's a rich topic to mine as the tech industry continues to be such an economic driver and influence on society. And the danger of such a dearth of diversity in any industry, much less this one, leads to real questions about what America's tech engine is exporting.

A lack of diversity means fewer ideas, perspectives and pushback that come with a varied and eclectic group of folks at the table. It can lead to the perpetuation of "brogrammer culture," where it's an accepted norm for "booth babes" to hawk your products while wearing a few strips of clothing, to have no shame in presenting a "Titstare" app designed to show you different sets of breasts, or to anonymously swarm women on the Internet with rape threats and beyond.

And the consequence of starting a pattern of white males-only rooms is that patterns tend to repeat themselves — after patterns and norms are well-established, it would take a lot of imagination for some of the boardrooms and lunchrooms in Silicon Valley to try to look or feel drastically different.

If the people solving tech problems are mainly white, male and privileged, then what problems aren't they solving? Should one of the most influential forces of the global economy be driven by only the perspectives of a certain slice of our population? How can individuals and institutions support more systemic change?

Tell Me More is devoting the month of March to talking about women in tech, and we would love your ideas via Twitter @NPRAllTech or @TellMeMoreNPR. Or you can email Tell Me More, send me a message on Facebook or leave a comment. We're looking for personal experiences that might shed light on this complex issue, or questions you'd like to see the show and blog dive deeper into in the coming months.