Accessibility links
Broken Age's Adventure Started Long Before Pressing Start : All Tech Considered The new game Broken Age is an intentional throwback to the old-school adventure genre. But the story of how the game was made is just as interesting as the one it tells.

The new adventure game Broken Age: Act I is groundbreaking.

To clarify, the actual design of the game itself is nothing revolutionary, and that's on purpose. Broken Age is an intentional throwback to the old-school adventure genre. These games focus almost entirely on storytelling, driven by puzzles the player must solve within the game's world. The genre had its heyday in the late 1980s to the mid-1990s. What's unique about Broken Age is the way the product was funded and the level of transparency during its development.

Double Fine's Kickstarter video set the tone for the game's creation and style.

The game's funding came primarily through a Kickstarter campaign. Developer Double Fine Productions initially asked for $400,000, but ended up raising more than $3 million. This was a record at the time, and opened the doors for other developers to use the same strategy to fund their games.

The enthusiasm of backers for the project can be linked to the game's designer, Tim Schafer. Schafer is a legendary adventure game designer whose credits include the Monkey Island series, Day of the Tentacle, Full Throttle and, most notably, Grim Fandango, released in 1998.

Grim Fandango was praised by critics, but it was largely ignored by consumers, and managed to only develop a relatively small cult following. Grim Fandango's commercial failure helped lead to the demise of the adventure game genre in the late 1990s. Schafer went on to found Double Fine and focused on developing games in other genres. But the designer's followers pined for another Tim Schafer adventure, and jumped at the chance to crowdfund it.

The Game Behind The Adventure

Broken Age is a coming-of-age story about two teenagers: a girl, Vella, and a boy, Shay. They live in very different worlds: Vella comes from a town called Sugar Bunting, where every 14 years a horrible monster must be appeased with a maiden sacrifice. Shay lives a solitary life on a spaceship that caters to his every need. The game follows the parallel struggles of Shay and Vella to break free of their surroundings. 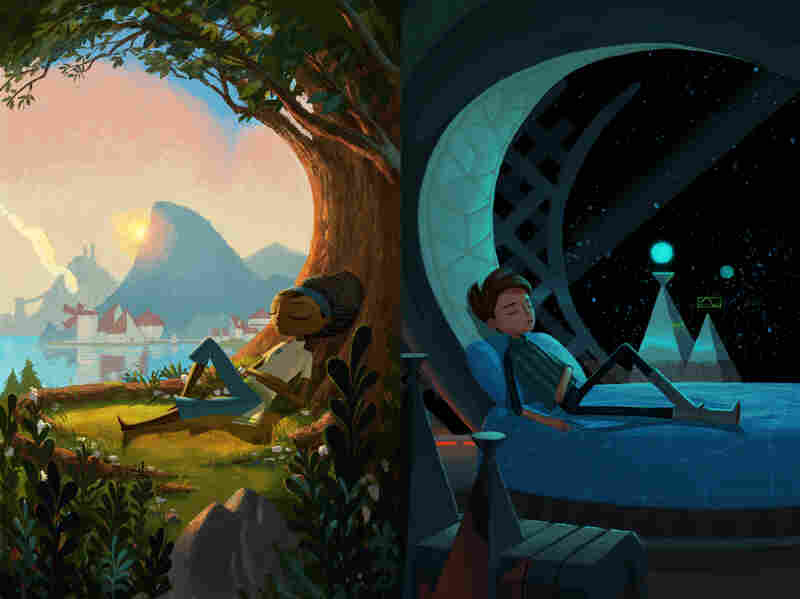 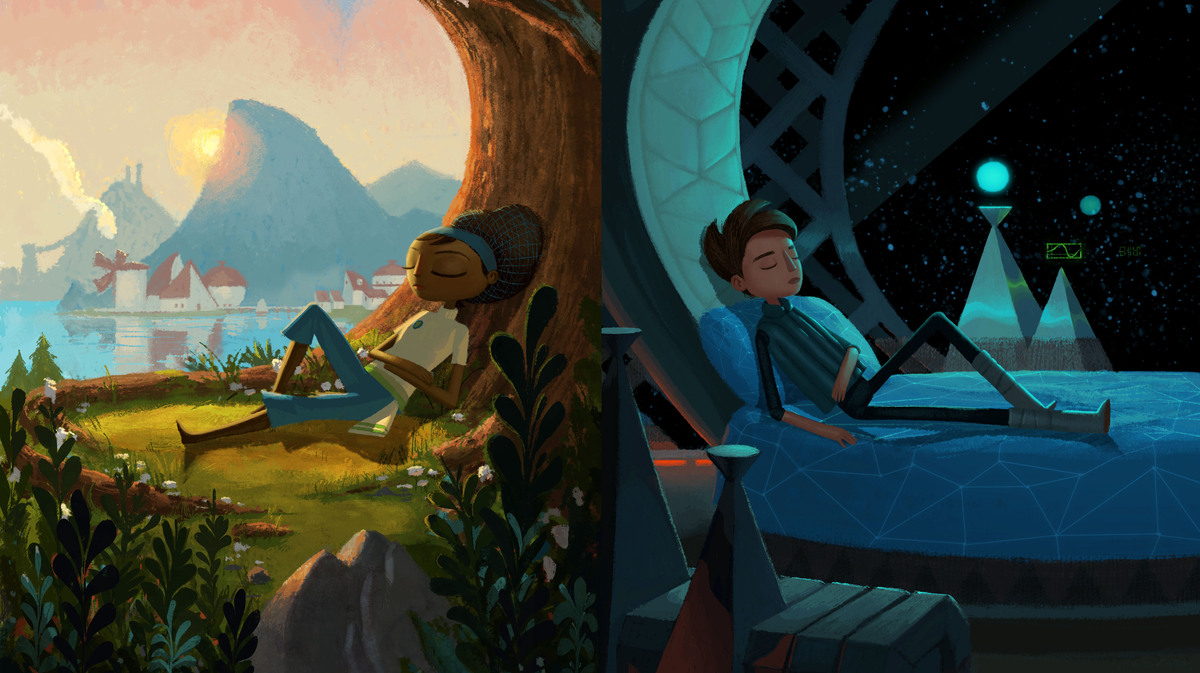 Vella (left) and Shay (right) are the main characters of Broken Age: Act I, a game funded through Kickstarter.

Double Fine brought in a documentary crew to film the making of Broken Age and the behind-the-scenes footage was periodically released to the project's backers. The 20- to 45-minute long episodes shed light on how a game goes from idea to finished product, what's often a closed and secretive process.

Backers watched as the Broken Age team brainstormed, came up with concept art, programmed, ironed out bugs and recorded the music and vocal talent (Elijah Wood and Jack Black's voices are both in the game, among others). The documentary also tracks how the project expanded in scope and how the company struggled to manage its budget, leading to a decision to split the product into two halves (Act II is promised later this year as a free update for players who buy Act I).

In a particularly brutal scene from one of the latest documentary episodes, the development team gathers as one of the game's animators presents a cutscene he's particularly proud of. The scene is one of the first character interactions between the boy, Shay, and a mysterious talking wolf. The camera focuses on the animator's face, and he smiles as the cutscene plays on a large monitor.

At the end of the scene, Schafer tells the animator that while the work is good, the wolf's exaggerated movements don't fit with the character's personality. Visibly crestfallen, the animator attempts to negotiate — maybe he can make some small tweaks — and that's when Schafer firmly tells him that the entire scene needs to be re-animated. The animator resigns himself to redoing hours of work. It's a moment that's instantly relatable to anyone who's been involved in a collaborative creative process.

Double Fine has also struggled with how to work with the press while keeping its promise to make sure the project's backers are the first to know about the game's developments. Progress updates were made available to the project's 87,142 Kickstarter backers (plus people who backed the game after the Kickstarter campaign ended) with the expectation that the news they contained wouldn't be shared until the company made formal public announcements. That didn't stop video game journalists from using backer updates as a source to report on the game's budgetary woes.

In one episode of the documentary, Double Fine staffers lament the actions of journalists as a "violation of our terms of use" and a betrayal of the agreement they made with backers. One of the company's employees, formerly a video game journalist himself, reminds the team that not publishing information — especially after it's already been "leaked" — would make a reporter feel "derelict in their duties."

A few weeks ago, the company released Broken Age: Act I to Kickstarter backers, with the caveat that reviews of the game were to be embargoed until it was made available for sale to the general public. It's standard operating procedure for companies to send early copies of games to reviewers with this expectation, but in this case, the embargo essentially amounted to a company instructing tens of thousands of its customers not to write about its product. After some criticism, Double Fine quickly reversed its decision.

Having A Dungeon On Your Desktop Is The Perfect Coffee Break

The reviews of Broken Age: Act I are generally quite positive; reviewers laud Schafer's script and the beautiful art style, though some have criticized Act I for being too short (about four hours) and not as difficult as older adventure games. Speaking for myself, as a backer of the project, I came away satisfied. I couldn't help but wonder, however, how much of my experience with the final product (technically, the first half of the final product) had been influenced by closely following its production. When the scene with the wolf appeared, I couldn't help but think about the corresponding moment in the documentary, and how many hours of work went into something that otherwise would have flown right by me.

Public sales of the game began Jan. 28, and made the online video game store Steam's "Top Sellers" list. In Double Fine's latest documentary episode, the company's vice president for business development, Justin Bailey, says, "If it sells 500,000 copies, we'll be an enormously successful studio. That will supply all the funds we need to be completely independent."

The stakes have clearly been raised since Double Fine launched its original Kickstarter campaign. The original purpose of funding Broken Age via Kickstarter was to raise money for a type of game that all but died out because it lacked market appeal. It will be interesting to see whether the wider gaming public's tastes have shifted in the more than 15 years since Grim Fandango, and whether critical and artistic success will also translate into financial success for Double Fine.

Broken Age is available for PC, Mac and Linux.

Travis Larchuk is an assistant producer for NPR's Morning Edition.