Accessibility links
Creator Of Runaway Mobile Hit Flappy Bird Taking Game Down : All Tech Considered Flappy Bird has been downloaded more than 50 million times since its release last year. The creator of the wildly successful but criticized mobile game says he just "cannot take this anymore." 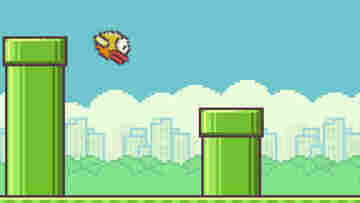 Flappy Bird is a simple mobile game that has been downloaded more than 50 million times. iTunes hide caption

The free mobile game Flappy Bird was all the rage this week, with reports that it has been downloaded 50 million times since its release in May of last year and that it was pulling in $50,000 a day with in-game advertisements.

So it came as a surprise to many when Vietnam-based creator Dong Nguyen tweeted on Saturday that he would be taking the game down from app stores:

I can call 'Flappy Bird' is a success of mine. But it also ruins my simple life. So now I hate it.

To get a sense of why someone would remove their wildly successful creation, you have to look at the game itself and the reaction from the industry and gaming press.

The game itself is simple. You control a little cartoon bird by tapping the screen to make it flap through a series of pipes. You score a point for each pipe successfully navigated. Your little feathered friend drops like a stone between flaps, making control rather difficult. If you touch a pipe, it's game over.

And that's it — that is all there is to the game. It is an incredibly addicting, frustrating and dead-simple game without any purchases required to play or other deceptive practices. It makes money from small ads that pop in at the top of the screen. But that was enough for Flappy Bird to eventually land at the top of the free charts in the Apple App Store at the beginning of the year.

And that, it seems, is where the trouble started.

While I will admit that the pipes look remarkable similar, Nguyen told The Verge that the game's look was in fact inspired by games he played as a kid. He didn't copy the game mechanics or storyline (there is no Flappy story), only a look. There are certainly far worse offenders than Flappy Bird when it comes to "borrowed" assets. Even Flappy Bird itself was copied by the game Ironpants, which sits at No. 2 on the free app charts.

Others in the press were more forgiving of Flappy Bird. Some used it as evidence of the unpredictability of the gaming industry. Writing for gaming site Polygon, Charles Pratt cites a famous quote from screenwriter William Goldman: "[In Hollywood] nobody knows anything."

"The success of Flappy Bird is above all a reminder that this maxim is as true in game development as it is in movie making," Pratt says.

Success Can Be Hard

The issue here really isn't whether Nguyen copied material from another game. Similar things happen in other creative industries all the time. Musicians sample from one another constantly, and we've all been subjected to similar movie syndrome (looking at you, White House Down and Olympus Has Fallen).

What's interesting here is the reaction to Flappy Bird and Nguyen's success and the intense attention that success often brings with it. For a solo, independent game developer, that success can be maddening.

Following Nguyen's announcement, game developer Mike Bithell, the creator of the indie hit Thomas Was Alone, wrote on his blog about his experience with success in the industry:

"This is the one where folk who've not been there always jump in with 'haters gonna hate'. Those people have not received 100 emails of bile in an hour. I got lucky in this regard, the internet decided I was 'nice'. I am aware of how arbitrary that decision was."

Though focused on the indie gaming community, what he writes could really be translated to any creative medium where sudden success can — and often does — take a negative toll on the artist or artists involved.

As the attention started to reach a fever pitch this week, Nguyen lamented that his surprise hit was being overrated by many in the gaming press, and that he just wanted some peace from the situation. Well, with this latest news, perhaps he might get it.

Update at 2:30 p.m. EST: As of Sunday morning it appears Nguyen has followed through and removed Flappy Bird from the Apple App Store and Google Play.