Accessibility links
Jazzpunk: A Spy Game Full Of Jokes, Blokes And Cold War Tropes : All Tech Considered This quirky adventure comedy game has more pop culture references than VH1. Nearly every object and character you encounter is an opportunity for a laugh. But you get to deliver the punch line.

Just last week I was lamenting a severe lack of comedy-based video games, where perhaps getting a hearty laugh is the goal rather than quelling a rebellion or fighting off hordes of zombies.

As if on cue, the new adventure game Jazzpunk comes sliding in like Kramer through Seinfeld's door. Released earlier this month, the game was developed by Necrophone Games (Luis Hernandez and Jess Brouse) and published by Adult Swim. Nominated for the grand prize at the 2014 Independent Games Festival, Jazzpunk is to video games what movies like Airplane!, The Naked Gun and Hot Shots were to film. Perhaps a more apt comparison is the improvisational game show Whose Line Is It Anyway?, where "everything is made up and the points don't matter."

The genius of Jazzpunk is that the comedy isn't just happening around you — it's happening to you and because of you. The player more often than not gets to deliver the punch line or perform the joke.

The setup is charmingly basic and silly, like the rest of the game. After an upbeat and stylized Saul Bass-inspired intro, you are plopped into your role as Polyblank, a spy for an unnamed organization helmed by a bureau chief who makes his office in a subway car and sounds like the person who delivered Ethan Hunt his impossible missions, only he's talking through a fishbowl. 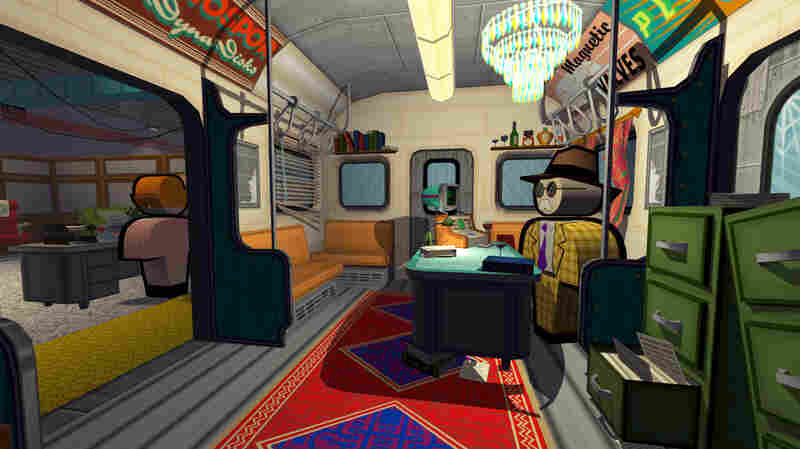 In Jazzpunk, you play a spy in a surreal world seemingly ripped from the pulpiest of spy novels. Necrophone Games/Adult Swim Games hide caption 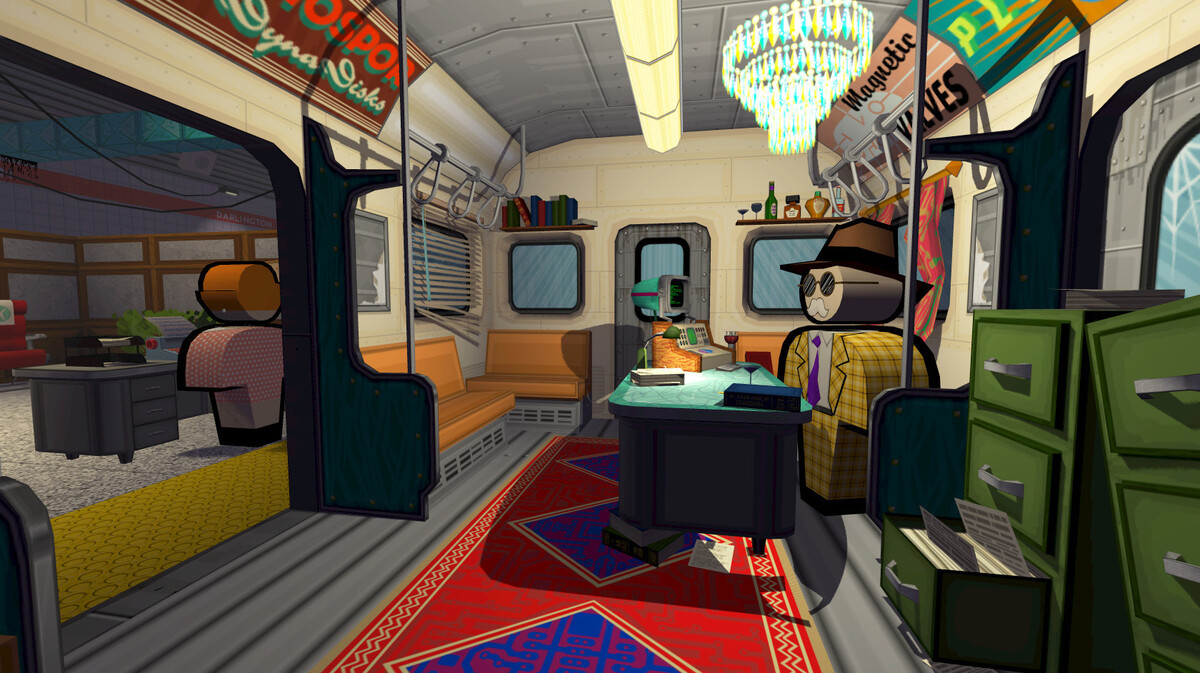 In Jazzpunk, you play a spy in a surreal world seemingly ripped from the pulpiest of spy novels.

With the satisfying wheeze of an obviously placed whoopee cushion, the game wastes no time letting you know you are here for the gags, not the story. Unlike games in which humor is the garnish on an otherwise bitter and gritty dish, the humor in Jazzpunk is the whole meal.

Your first mission is to infiltrate the Soviet consulate and retrieve your first of many MacGuffins in what passes in Jazzpunk for a plot. Then you are released into an alternate-reality Cold War setting populated by Fisher Price Little People-like characters that take on the roles of everything from flirty sex bots to a monocle-wearing English gentleman who asks you to satiate him with a blast of spray cheese to the face.

The actual main spy missions are pretty forgettable, but not in a negative way. They simply serve as the main hallway of a Minotaur's maze of jokes, sight gags, one-liners, pop culture references, puns and over-the-top satire. Once you've thoroughly explored each branch, you can return to the main task.

Every object and character you encounter along the way is an opportunity to get a laugh or get thrown into a mini game. One moment you're helping a talking frog with his Internet connection by playing Frogger, only to be shooed away for some "private" time, and the next moment you're playing "Wedding Quake," a marital parody of the classic first-person shooter, Quake.

The game does follow a slight arc, and there is a villain in the end, but, again, the gags and humor are the real characters here. At first, the jokes fly fast and from all sides; the latter part of the game has great comedy tangents, but less of them. That said, it is a fun romp from beginning to ridiculous end.

You Had Me At Hunter

I didn't know what to expect before I played Jazzpunk. I knew only that it was meant to be a funny game. "Do I have something on my face?" asks one of the game's many unnamed characters near the beginning of the first mission. You respond by flicking breadcrumbs off his mug in an uncomfortable close-up seemingly pulled straight from John Kricfalusi.

After that, I was totally onboard the Jazzpunk train.

What's wonderful about the jokes and gags in Jazzpunk is not that they all hit the mark — in fact, some fall intentionally flat — but that there are so many of them. The punch lines reference such a wide swath of pop culture that you're guaranteed to get a few. And the ones that hit closest to home — especially the really obscure references — feel like a wink or a high-five between the player and the developers.

From Wilhelm screams to fart jokes and movie clichés, there's a good chance there is something for any player's brand of humor. Even some of the sound effects seem like hat tips to the old Tex Avery cartoons, another nod to comedy royalty.

Also, any game that populates a level with gibberish-spouting Hunter S. Thompsons is a game after my own heart.

There are those who might complain that the game's running time, at just a few hours, is a bit short. For me, it's no different from a short book or movie; as long as it serves up a complete experience, I am OK with a shorter running time, which is common among indie games. Also, like last week's review subject, Octodad, if this game were much longer, it might get stale.

The fact that you can't really die or fail in Jazzpunk might also bother some gamers. Some say that if you can't lose then it's not really a game. This seems to be a big issue these days (see also Gone Home, The Stanley Parable) and is a common criticism of the indie market. To me, this kindly kicking aside of conventional win states is a breath of fresh air. I'm glad games like Jazzpunk are willing to break free of video game formulas to bring something new to the table.

Jazzpunk is available now for Windows PC, Mac and Linux.

Steve Mullis is an associate Web producer at NPR. If you want to suggest an independent game worth featuring here, please write or tweet him. You can also follow us on our Tumblr blog NPR Plays.