Accessibility links
Being An 'Octodad' Is A Hilarious Lesson In Controlled Chaos : All Tech Considered In the game Octodad: Dadliest Catch, you control an octopus posing as a husband and father who doesn't want the people in his life to realize he's a cephalopod. What could go wrong?

Great comedy is sometimes hard to find, and great comedy in a video game is even rarer. But the new game Octodad: Dadliest Catch is a "Theater of the Absurd" for the gaming crowd, and it certainly does not fail to entertain. From the title alone you know you are in for something completely silly.

The premise behind Octodad is that you are, indeed, an octopus wearing a suit and trying to pass as a husband and father in a human world. You fumble, flip, flop and crash through your daily routines as best you can, all the while trying to keep your cephalopod-secret hidden from those closest to you. 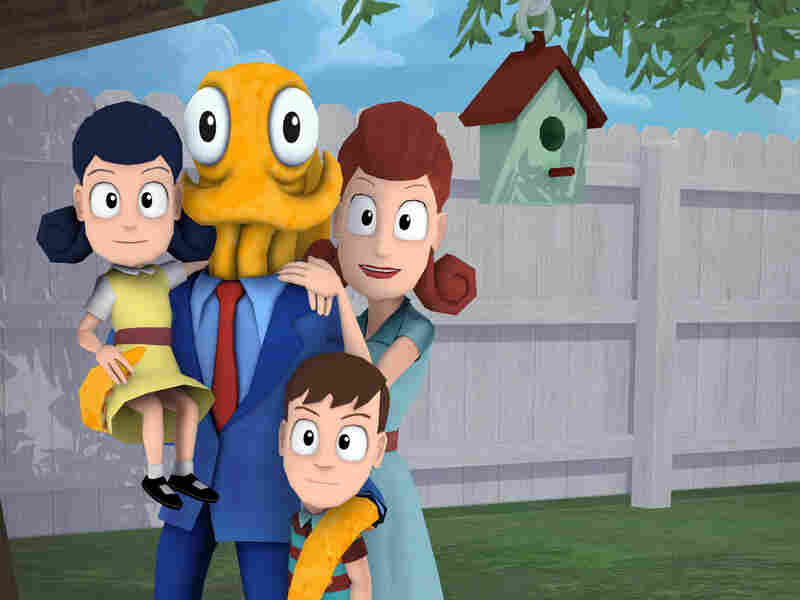 In Octodad: Dadliest Catch, you play a mild-mannered octopus living in a human world, struggling to keep your cephalopod secret from your family. Young Horses, Inc. hide caption 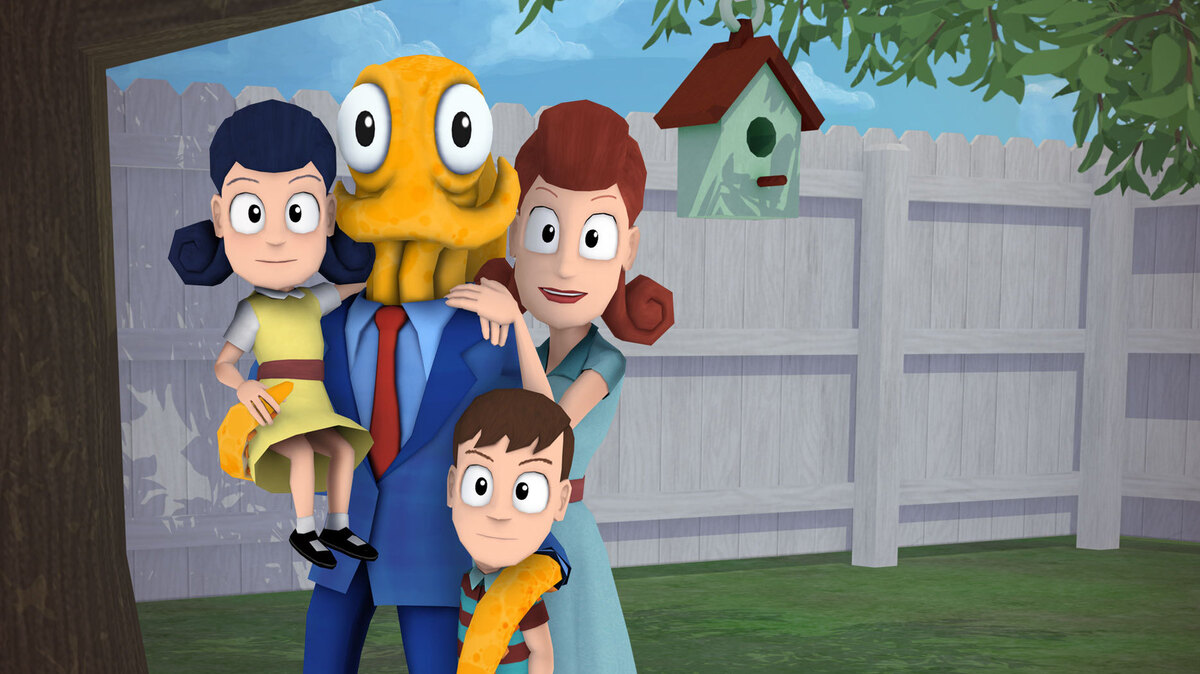 In Octodad: Dadliest Catch, you play a mild-mannered octopus living in a human world, struggling to keep your cephalopod secret from your family.

The game is actually a follow-up to the original Octodad, a game created by students at DePaul University and which won a Student Showcase award at the 2011 Independent Games Festival. Many of those students went on to form Young Horses Inc. and, after some funding on Kickstarter, went on to develop Octodad: Dadliest Catch, which was released last week on PC, Mac and Linux (and soon on PlayStation 4).

'Nobody Suspects A Thing'

The game opens on your wedding day, and the first order of business is to get dressed and get to the altar. How our eight-legged hero came to be a landlubber and how he met his wife isn't something that is immediately apparent, nor should you spend much time thinking about it. I mean come on, you've got to get awkwardly dressed for your big wedding day.

The strangeness of the whole scenario is perfectly illustrated by the game's haphazard controls. You can use either a gamepad or a keyboard and mouse combo, but either way you're going to have an intentionally difficult go of things. You control each leg and arm separately, which often sends you and the objects in your vicinity careening into each other in violent, Kubrick-ian glee. It's all done with cartoon-level chaos, so there is no blood splattering or similar gore caused from your flailing appendages.

It is this intended level of anarchy that forms the backbone of the game. There is a story of course, as the game fast forwards to your family life post-wedding, now complete with two kids. Again, their siring is left to the same imagination that allows us to watch ALF or Family Guy's Brian the talking dog without asking too many questions. You also only communicate with your family through a series of bubbly gurgles and gestures, which they inexplicably seem to understand.

If you wanted to think about the game a little deeper, one could view it as an analogy for the secrets we keep from those around us, perhaps even mental illness. Writing for The Telegraph, Ashton Raze put it this way:

"So what does it mean, being an Octodad? It means he struggles to get around and function in a world not designed to accommodate him. It means you, as a player, have to individually control his legs and arms, flopping him around the levels as you carefully put one foot in front of the other. It means that when he DOES struggle, because nobody knows he's a cephalopod, people watch, stare and judge. It means that any behaviour due to being who he is will be regarded as abnormal, wrong. If people knew his secret, at least in Octodad's mind, they'd judge him, ostracise him. He'd lose everything he cares about."

The good thing is that the game doesn't force this theme, or even try for that matter, and if you want you can just enjoy the silliness. But it is a credit to the developers of Octodad that these deeper meanings can be drawn from such a goofy game.

Octodad is at its best when you are tasked with doing the mundane: making coffee, mowing the lawn, picking up various items from the grocery store and spending a day with the family at the aquarium. Unfortunately, the developers chose not to leave well enough alone and decided to introduce an antagonist other than gravity and the difficulties of octopus ambulation. In this case, the enemy is an unnamed sushi chef manically bent on revealing our hero's identity.

This unnecessary addition, in my opinion, forces more "game-like" attributes to something that otherwise could have remained unique. The later portions of the game add superfluous stealth sequences that turn controls from something that were hilariously frustrating into just frustrating. The developers could have just kept the game focused on the mundane tasks, adding more of them, and I feel it still would have felt like a complete experience.

That said, the game is still great. And it also has one of the catchiest opening theme songs in recent memory. Seriously, give it a listen and tell me you don't want to hop into this absurd world immediately:

The Comedy Game As A Genre

The best thing about Octodad is that it brings a much-needed lightheartedness to the gaming landscape. In an age of very serious shooter games and very serious zombie games, a chaotic romp as a suit-wearing sea creature is a welcome break. It was nice to play a game that doesn't just have funny lines peppered into the story, but one where the entire premise is built around a running gag.

The goofy premise coupled with equivalently goofy gags, a kinetically colorful art style and that rocking theme song all give the game a feeling of a cartoon TV sitcom. The family and kids even offer off-hand references to earlier silly situations and gags, a common trope in modern TV comedy, that the game pulls off equally well.

Hopefully games like this will see a return of the comedy game as a genre — one that sort of simultaneously died with the death of the point-and-click adventure. Some of my greatest gaming memories are of playing Maniac Mansion, Day of the Tentacle, the Space Quest series, Full Throttle and other games that used humor as a vehicle and not just as a distraction.

Though Octodad: Dadliest Catch is short, it works in this case since the gimmick could grow stale if stretched out too long. The game does have a cooperative mode, with each player controlling an individual limb, and includes a level creator for extended replay value. I'd definitely recommend checking it out if you need a laugh. Who knows, you might even learn a little something about yourself.

Steve Mullis is an associate Web producer at NPR. If you want to suggest an independent game worth featuring here, please write or tweet him. You can also follow us on our Tumblr blog NPR Plays.