Accessibility links
A Push To Boost Computer Science Learning, Even At An Early Age : All Tech Considered Only about 10 percent of K-12 schools teach computer science. Some companies are trying to fill a void in public education by teaching kids programming basics. 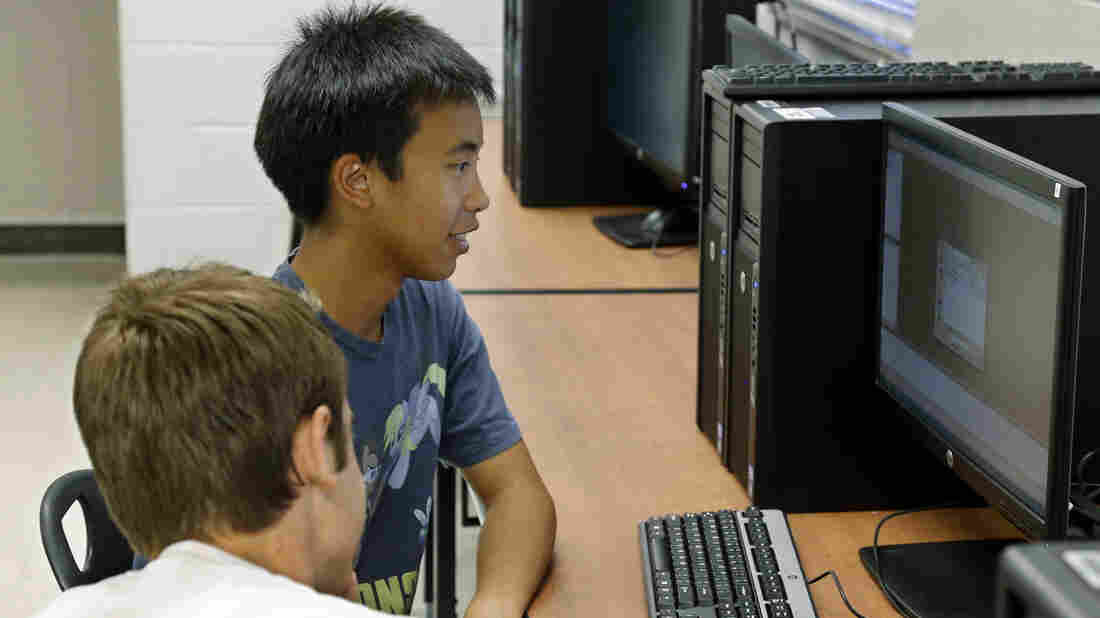 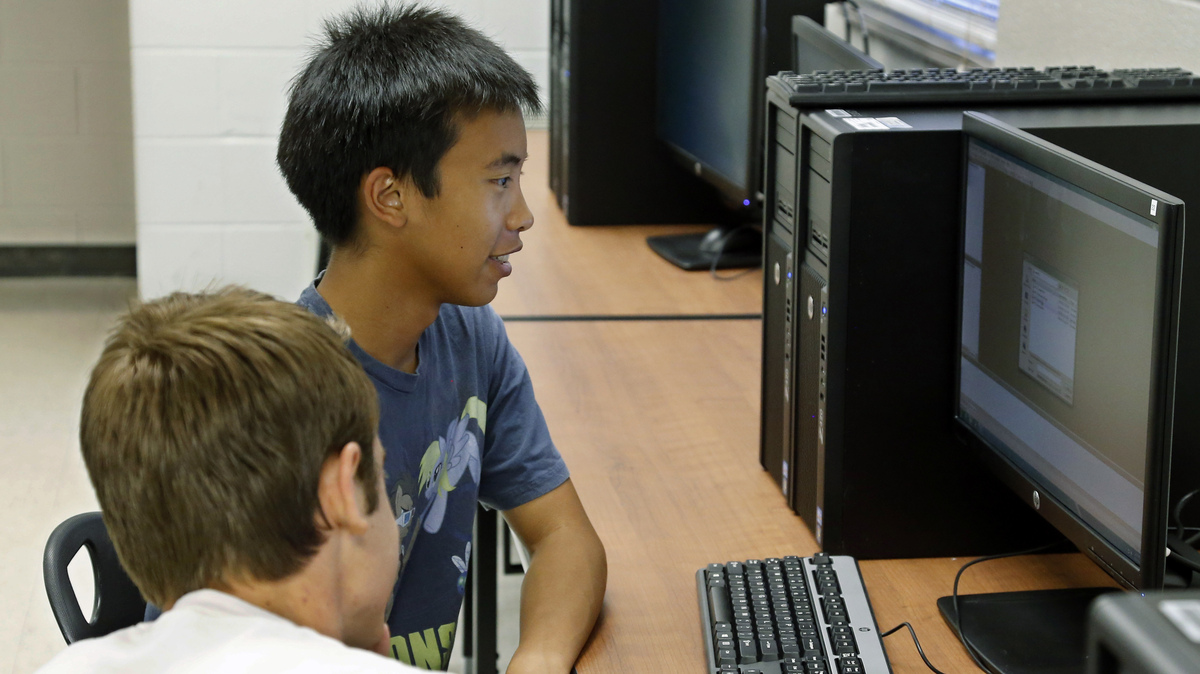 A handful of nonprofit and for-profit groups are working to address what they see as a national education crisis: Too few of America's K-12 public schools actually teach computer science basics and fewer still offer it for credit.

It's projected that in the next decade there will be about 1 million more U.S. jobs in the tech sector than computer science graduates to fill them. And it's estimated that only about 10 percent of K-12 schools teach computer science.

So some in the education technology sector, an industry worth some $8 billion a year and growing, are stepping in.

At a Silicon Valley hotel recently, venture capitalists and interested parties heard funding pitches and watched demonstrations from 13 ed-tech startups backed by an incubator called Imagine K-12. One of them is Kodable, which aims to teach kids 5 years old and younger the fundamentals of programming through a game where you guide a Pac-Man-esque fuzz ball.

"As soon as you can start learning [coding] you should, because the earlier you start learning something, the better you'll be at it later in life," says Grechen Huebner, the co-founder of Kodable. She's working two computer screens to demonstrate how the game works.

"Kids have to drag and drop symbols to get their fuzzy character to go through a maze so they learn about conditions, loops and functions and even debugging," she says.

So should kids who've barely shed their pull-up diapers really learn to code? Huebner thinks it's vital. "We have kids as young as 2 using it. Five is just kinda the sweet spot."

(My daughter's behind, I think. She's 4 and hasn't started coding. Bad parent.)

"Ninety percent of schools just don't even teach it. So if you're a parent and your school doesn't even offer this class, your kids aren't going to have the preparation they need for the 21st century," says Hadi Partovi, co-founder of the nonprofit Code.org. "Just like we teach how electricity works and biology basics, they should also know how the Internet works and how apps work. Schools need to add this to the curriculum."

Through his "Hour of Code" initiative, Partovi is working to get kids, parents and schools interested computer science curriculum.

'It's All Around Us'

Computers Are The Future, But Does Everyone Need To Code?

Third-graders at a public elementary school in Baltimore recently took part in a game-based Hour of Code to start to learn the very basics of coding even though they don't realize it.

"So you're moving three blocks and then you press start," one third-grader says.

Gretchen LeGrand with the nonprofit Code in the Schools is trying to bring computer science fundamentals to underserved, low-income kids in the city. She says it's a huge challenge in a district with few resources.

"The computers are old or outdated. We either can't install the software we want to use to teach computer programming or the connection's slow," she says. She's had to adapt to teaching about coding without a computer or what more teachers are calling teaching CS unplugged.

Partovi says teaching computer science is not about esoteric knowledge for computer geeks or filling jobs at Google or Microsoft. Most of these jobs are not with big high-tech companies. It's about training a globally competitive workforce and keeping most every sector of the U.S. economy thriving.

"Our future lawyers and doctors and politicians and businessmen — the folks in the other jobs — need to have a little bit of a background about how the world around them works," Partovi says. "It's all around us, and every industry gets impacted by it."

There are some bright spots: New York, Los Angeles, Chicago and Broward County, Fla., have all recently boosted their commitments to expanding computer science offerings. But there's a long way to go, says Chris Stephenson, who directs the Computer Science Teachers Association. She says a big problem is profound confusion about just what computer science is. Too many parents and administrators conflate gaming and basic point-and-click literacy with computer science — the principles and practices of computing and coding.

"I've had administrators actually say to me in all good intention, 'I know kids are learning computer science in my schools because there are computers in the schools.' And that is just not true," Stephenson says.

"I think that they just don't understand that having access to a computer isn't the same as learning computer science any more than having a Bunsen burner in the cupboard is the same as learning chemistry," she says. "There's a scientific discipline here you can't just learn by playing around with the technology."

The "guesstimate" is that only 5 to 10 percent of schools teach computer science, based largely on data on students who take the AP test in computer science annually. The real percentage may be lower. Nobody tracks the figures nationally.

"It's crazy small. I mean it would be absurd if it weren't so scary; that's how terrifying it is," Stephenson says.

"The people that are most likely to succeed have access to it and other kids do not, and we really need to look at those facts and figures and be horrified by them," Stephenson says.

She says the Hour of Code — which has reached millions of students around the world — is a terrific start. But until more public schools offer computer science — for credit — she says the knowledge gap will only continue to widen.