Accessibility links
DIY Houses In The Internet Age: Some Assembly Required : All Tech Considered Remember the Sears kit houses from the early 1900s, ordered from a catalog and assembled on-site? Now, online designers around the world are building WikiHouses out of plywood pieces that fit together like a puzzle. No nails, no fasteners, no adhesives. Just slot-together joints and the Internet. 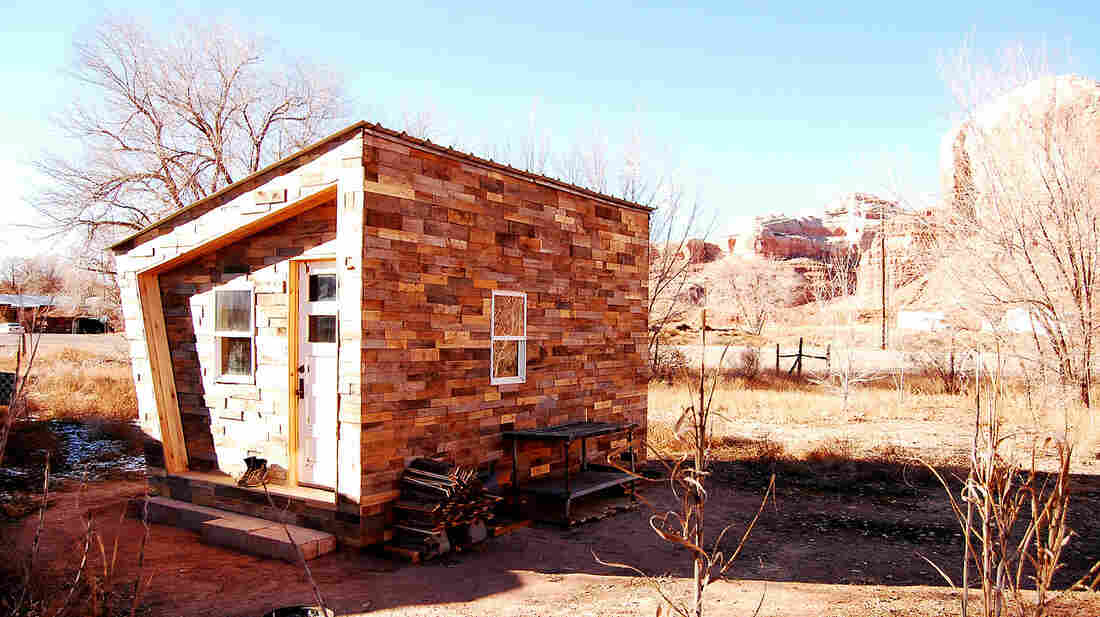 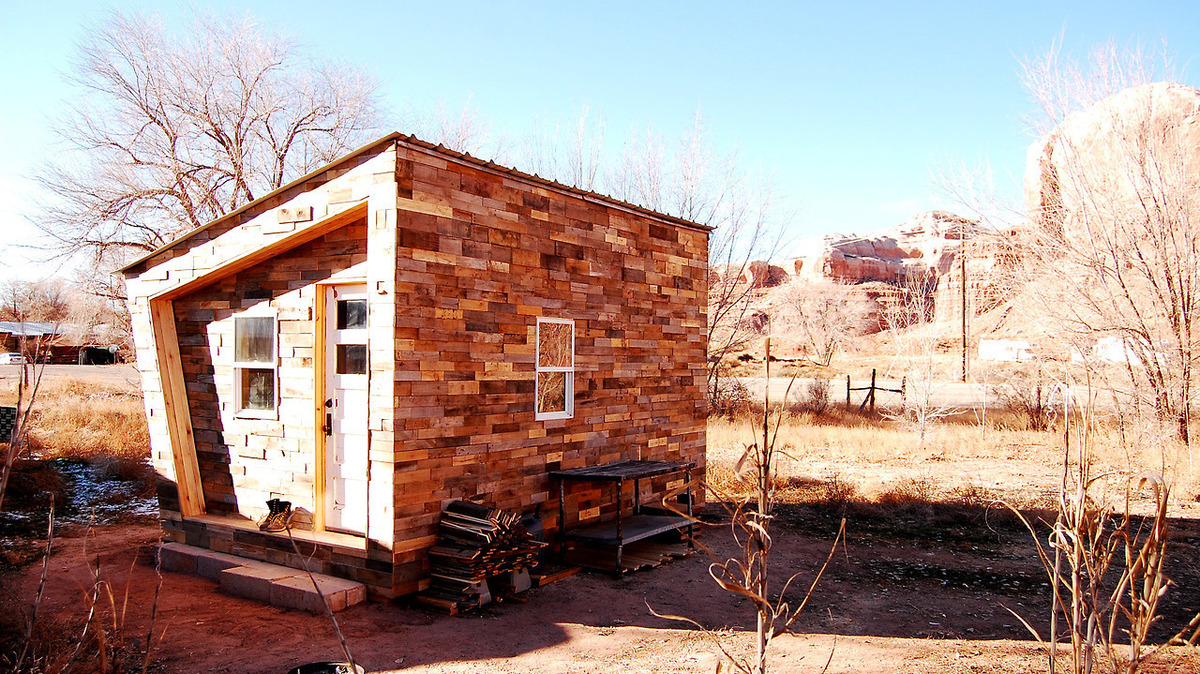 Good things come in small packages. Lacy Williams, an architecture student, and her boyfriend, Patrick Beseda, built a WikiHouse to live in during a field project in Utah.

If you can barely swing a hammer, you can still build your own home.

Builders at the Maker Faire in New York City proved this point last fall, with something akin to an old-fashioned barn-raising.

The event celebrates the do-it-yourself aesthetic, particularly when it comes to digital fabrication and open-source construction plans. Using wooden mallets cut from plywood, a crew of eight banged together the slotted frame of a WikiHouse without a single nail.

The result: a livable home.

"No one, I would say, is a professional builder of buildings," said Nick Ierodiaconou, an architect on the London WikiHouse team. "When everyone came together at the beginning of this process, no one knew the system."

Advances in technology and a bit of architectural activism have led to the WikiHouse project, founded in London by Alastair Parvin two years ago. The project makes digital blueprints available online for free. Amateur builders use computer-cut plywood pieces that fit together like a jigsaw puzzle.

It took the WikiHouse team of eight just two days to build its two houses, which were 12 feet wide, 26 feet long and nearly 10 feet high. 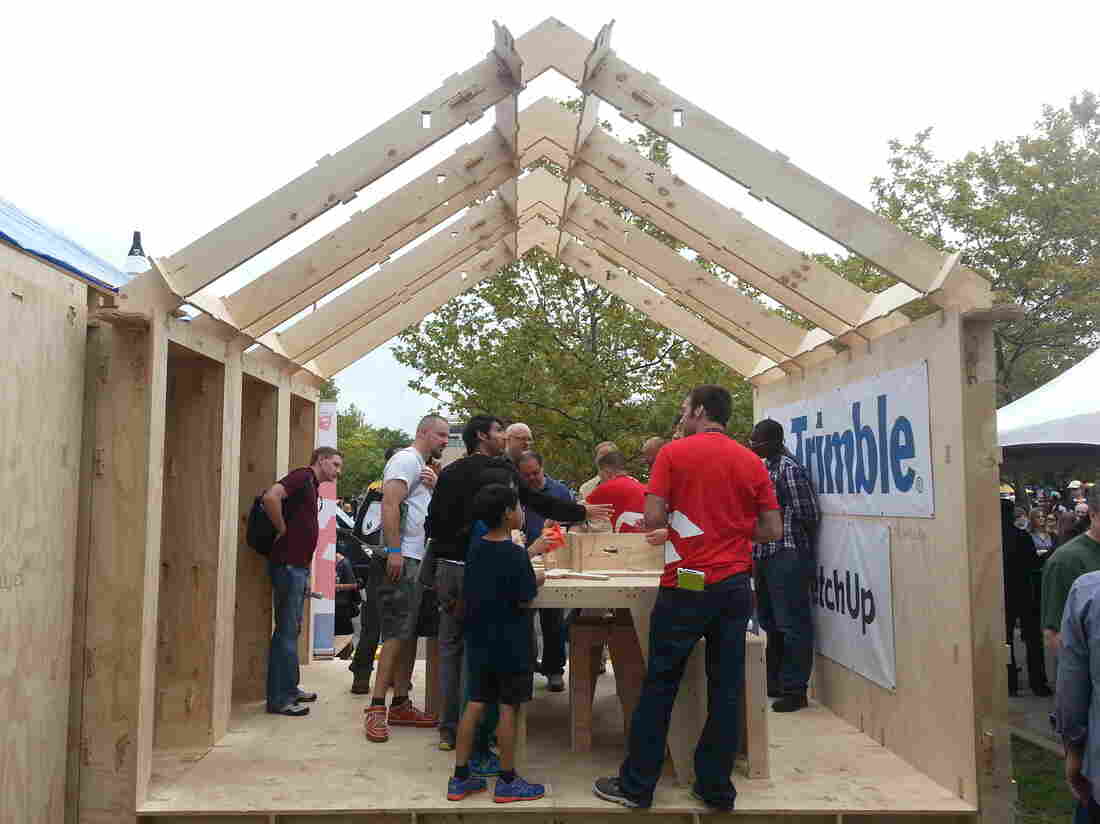 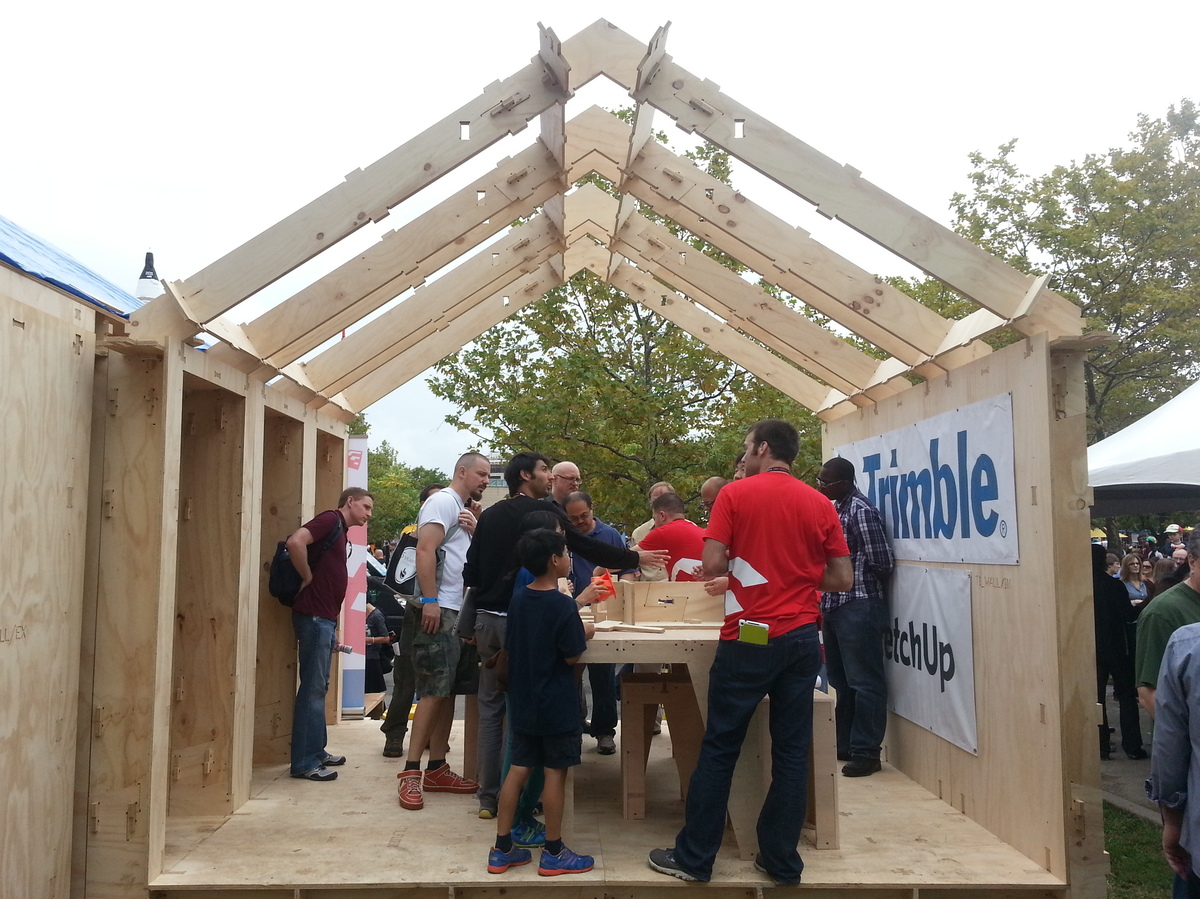 One of two WikiHouses assembled at Maker Faire in New York City.

Builders use 3-D modeling software to design the houses and direct a robotic power tool called a CNC router to cut parts out of sheets of plywood. The free designs can be customized with computer-aided software.

Some CAD software has a steep learning curve but SketchUp, a program popular with woodworkers and architects, is simple enough for kids to learn, says SketchUp's product manager, John Bacus.

"I teach it to third-graders and they do just great," he said. "They make models of dog houses and forts they want to build in the back yard."

Lacy Williams, an architecture student at the University of Colorado, and her boyfriend spent $5,000 to build a WikiHouse to live in during a semester-long field project in Utah.

Architecture students "need to know how to build something," Williams said. "And for us to be able to learn this alternative style of building, it was invaluable."

Williams and her partner built a 150-square-foot shelter they call the FOUNDhouse. They used discarded building material and bought sheets of plywood they cut on a CNC router. It took more than an hour to cut each of the 60 sheets.

There's a long history of ordinary people building their own homes. In the first half of the 20th century, Sears, Montgomery Ward and other companies sold more than a quarter-million kit homes. The blueprints were tailored for novice builders. Sears promised that "a man of average abilities" could build one of these houses in about 90 days, said Rosemary Thornton, who wrote a book on the topic, The Houses That Sears Built.

"Seven-hundred-and-fifty pounds of nails, 27 gallons of paint and varnish, and 10 pounds of wood putty. These were complete kits," she said. "Right down to the doorbell and coat hooks."

The WikiHouse may not become the kit home of the 21st century. But it fills very particular needs.

In Christchurch, New Zealand, the scene of a devastating earthquake in 2011, the WikiHouse team is designing an earthquake resistant structure. In Rio de Janeiro, where the favelas, or slums, are crowded and land is at a premium, another WikiHouse group is gearing up to build two- and three-story homes. It's just what Parvin, the WikiHouse founder, hoped for.

"The aim is to make it possible for anybody to get access to design knowledge, even if they don't have a lot of construction skills, [or] an awful lot of money and get a house which is actually suited to where they are," he said, "and not just a one-size-fits-all house."