Accessibility links
In 'Domain Awareness,' Detractors See Another NSA : All Tech Considered Police are building software systems to integrate their data flows — from cameras to license plate scanners and social media — to better identify threats and suspects. But there's a privacy backlash. 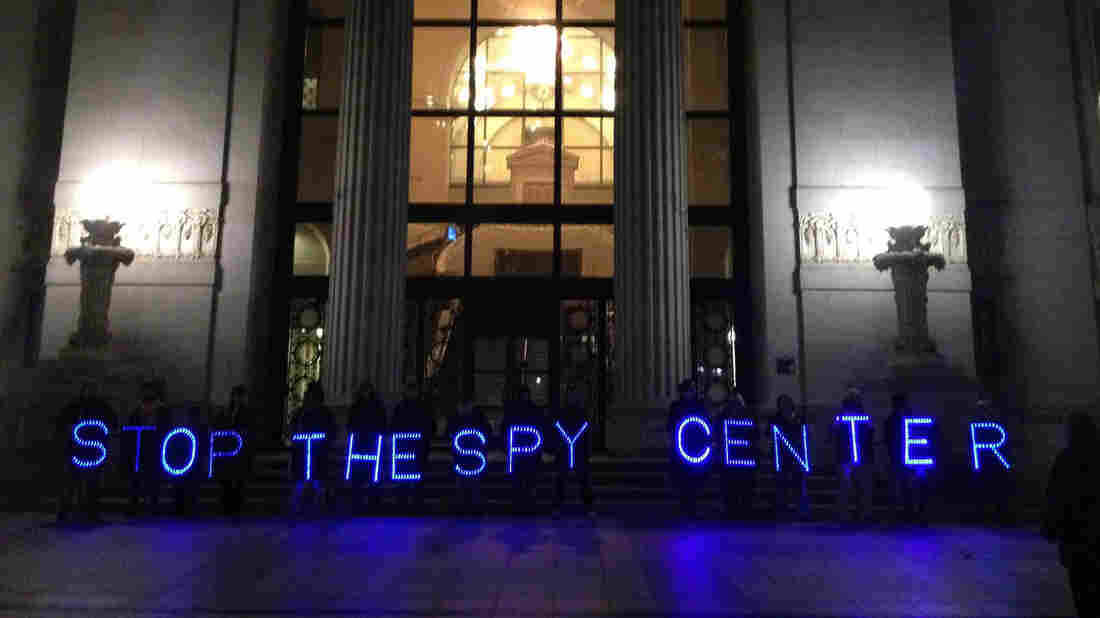 Protesters line up outside City Hall in Oakland, Calif., to demonstrate against the Domain Awareness Center, a data integration system being built by the city and the Port of Oakland. Martin Kaste/NPR hide caption 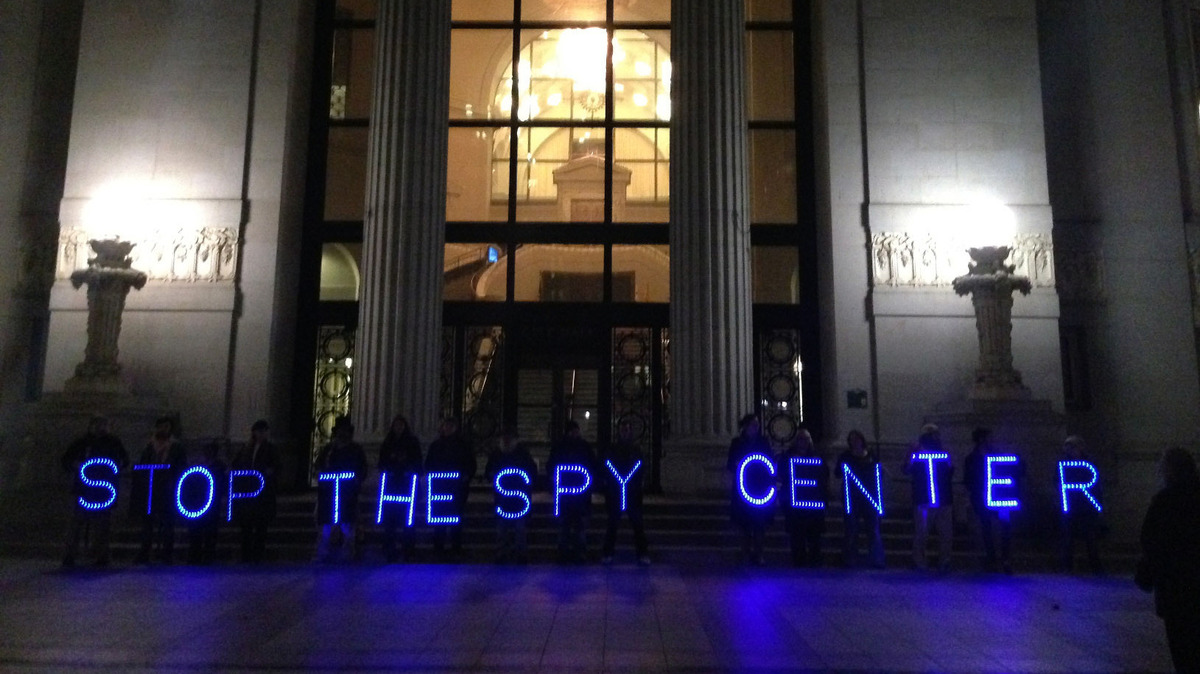 Protesters line up outside City Hall in Oakland, Calif., to demonstrate against the Domain Awareness Center, a data integration system being built by the city and the Port of Oakland.

Police are like the rest of us; they suffer from information overload. The data pour in from 21st century sources ranging from license plate readers to Twitter. But as the information comes in, it hits an old-fashioned bottleneck: human beings.

"They all have access to different databases," says Dave Mosher, vice president of program management at Microsoft Services. He describes the typical law enforcement command center as a room full of people at computers. "And they all stand up and walk around and talk to each other and they'll say, 'Tell me about this,' or 'Tell me about that.' "

Microsoft believes it solved that bottleneck when it helped the New York Police Department build something called the Domain Awareness System. It's software that combines data streams and lets the computers look for what's important.

"If I'm an officer, it alerts me," Mosher says. "[It] says, 'You might want to take a look at this, based on the rules you put into the system. This looks suspicious, do you agree?' "

Microsoft is marketing a version of this to other police departments under the brand "AWARE." And it's not the only company getting into the business.

'A New Age' Of Policing

The appeal is obvious, especially for cash-strapped, high-crime cities such as Oakland, Calif. City leaders there say they simply don't have the tax base to pay for the number of police officers they need, so they've looked toward "domain awareness" as a kind of force multiplier.

"We're not ever going to have the police department that we used to have," says Noel Gallo, a member of the City Council. "We're at a different age, a new age, that we have to have some other tools to deal with crime."

For the past couple of years, the city of Oakland has worked with the Port of Oakland to build its own version of the system. It's called the Domain Awareness Center, or DAC. The federal government is paying for it with Homeland Security grants. But as the project grew, so did opposition.

After last summer's revelations of domestic spying by the National Security Agency, protesters started showing up en masse at Oakland City Council meetings. One signed in for the public comment period as "Edward Snowden"; another stood up to videorecord the council while supporters cheered and jeered. In November, protesters became so raucous, they forced the council to clear the hall.

"We're not just fighting for Oakland; we're fighting for everybody in the country," says Joshua Smith. He's one of the more computer-savvy activists against the DAC, which he sees as a part of a nationwide surveillance grid, funded by Homeland Security grants.

"Everything is IP-networked." Smith says. "Everything can be fibered straight to the White House if necessary. Straight to Langley."

That's been one of the most consistent criticisms of these domain awareness systems: they're flexible. They may start out combining video camera feeds with data from license plate readers, but once you have the platform running, police departments could plug in new features, such as social media scanners.

The backlash has made city officials reluctant to speak publicly about the DAC; staffers canceled an interview with NPR at the last minute. In the past, they've stressed the DAC's utility as an emergency response center.

But City Council members acknowledge the interest from the Oakland police. Council member Lynette McElhaney says the interim chief has said that the DAC could help "leverage" the small police force. McElhaney, who's been skeptical of the DAC, also says the police department doesn't expect miracles from the technology. The identification of suspects, she says, is "way more futuristic than what would be contemplated by the initial install."

And that's the heart of the controversy in Oakland: the uncertainty over what the DAC is really capable of. For instance, could the video feed be combined with facial recognition?

"No one trusts city staff at this point to tell the truth," says Brian Hofer, a spokesman for the Oakland Privacy Working Group, an organization that crystallized around the DAC debate. "The internal emails we've seen at least allow for the potential of [facial recognition] to be included. ... Whether that will happen for certain, it may require litigation and discovery to find out."

Some of the suspicion stems from how slow the city was to lay down the rules for the DAC — how long data can be saved, who can search them, and so on. Linda Lye, a staff attorney with the ACLU of Northern California, says those limits — the DAC "privacy policy" — should have come first.

"For what purpose are we adopting this?" asks Lye. If it's really for emergency response, she says, "that's a wonderful use of new technology. But then we need to configure the system so that it furthers those purposes, and doesn't surreptitiously further another entirely different purpose ... for example, warrantless mass surveillance."

City officials are working on a privacy policy for the DAC, but it may be too late, politically. On Tuesday, confronted by the usual crowd of protesters, the City Council decided to delay approval of the DAC's next phase. And some council members are talking about scaling back the project and limiting "domain awareness" to Oakland's port — even if it means losing out on some of the grant money from Homeland Security.