Accessibility links
Banished Is Like SimCity Without The City (But With Cholera) : All Tech Considered Banished is a new indie city-builder game, but instead of raising taxes and managing the affairs of a metropolis, the focus is on survival in the harsh times of a medieval era with limited resources.

Banished Is Like SimCity Without The City (But With Cholera)

Banished Is Like SimCity Without The City (But With Cholera)

This is part of our weekly 'Indie Watch' series of game reviews. Check here on Sundays for more posts in the series.

"Get busy living, or get busy dying."

That famous line, said by Tim Robbins in the film The Shawshank Redemption, perfectly summed up his character's struggle and subsequent escape from the titular prison. It also, however, perfectly encapsulates the feeling of the game Banished, a new indie city-builder from Shining Rock Software. 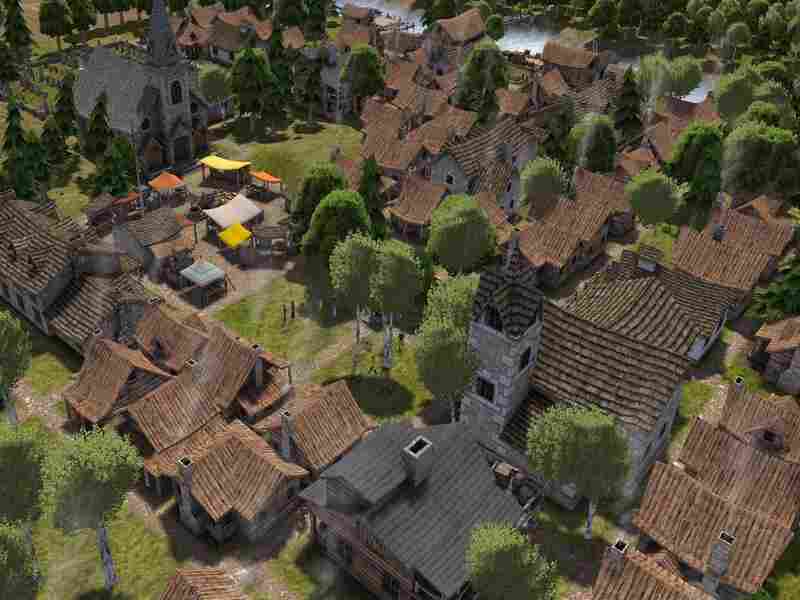 In Banished, you build gentle hamlets of wooden and stone houses. That's a contrast to the bustling urban centers of many city-building sim games, but the pace is no less hectic. ShiningRockSoftware hide caption 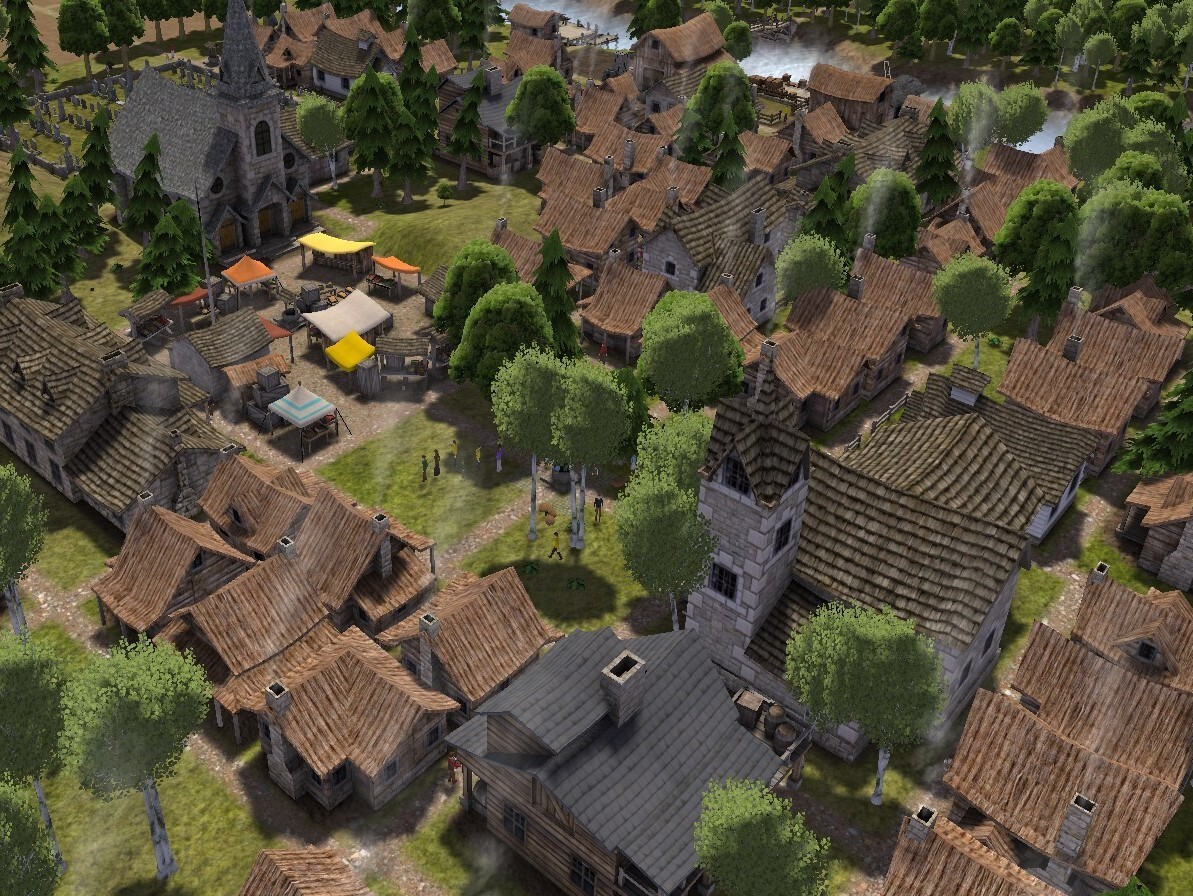 In Banished, you build gentle hamlets of wooden and stone houses. That's a contrast to the bustling urban centers of many city-building sim games, but the pace is no less hectic.

The game places you in charge of a small band of villagers, banished from somewhere for unknown reasons, who are now tasked with starting their own town from the ground up. The goal is simple: survive. They must gather the proper resources, build houses, grow food and basically make a livable community so they can start popping out babies.

It's this emphasis on simple survival that sets Banished apart from city-builder games that have preceded it.

We Built This City

The city-builder, or resource management-type game, has been around since the earliest days of video games and even computers. One of the first was a text-based game called Hamurabi, published in BASIC Computer Games in 1978 (though its lineage goes back even further). The game had you managing the land and resources of Sumeria for a 10-year term.

In 1989, the now-famous SimCity paved the way for the city-builder game as we now know it today. It's a genre that has spawned a wide variety of games and sub-genres with various degrees of complexity; games where you manage city affairs, build a subterranean dwarven fortress, run a theme park or even rule your own little piece of paradise as "El Presidente" of an island.

What Banished does differently is strip away all the glitz and glamour of being a mayor, dictator or a god, which is the role you usually take in these games. Instead, you're the nameless, faceless (but not blameless) overseer of your small group of villagers set in low-tech, medieval-ish era. The mechanism by which they obey your orders is not important; what's important is that they get to work.

Which brings us back to that famous line: "Get busy living, or get busy dying." The survival and thriving of your town depends on how quickly and efficiently you set them upon gathering food, building structures to live in and keeping warm in those harsh winters. Sounds simple, right? Oh no, that's the kind of thinking that will make your little colony disappear quicker than you can say "Roanoke."

The end of days can come fast in Banished. Build too many houses too quickly, and your population will outgrow your food supply. Forgot to chop enough wood when you knew darn well that winter was coming? Well, looks like the town will freeze to death. Didn't build a hospital and gather medicine? Well, that outbreak of cholera is going to take a toll. Workers can also die simply from old age, and their jobs need to be filled to keep your town running efficiently.

It's this Whac-A-Mole nature of the game, where you are actively trying to stave off the next disaster, that I really liked about Banished. In the most wonderful of ways, it's probably one of the most stressful city-builder games I've played in a long time. The learning curve is steep, and you will likely have many failures, but that first success, once you get the hang of things, feels awesome.

Also worthy of note is that Banished, which is pretty complex, was all created by one guy, programmer Luke Hodorowicz. He alone makes up the roster of Shining Rock Software.

The Story Of Galen

There once was a man named Galen (no, not that Galen), and he lived in a small, industrious farming town. He was a builder, helping the town raise storage barns and living quarters. It was a harsh life, but rewarding.

Galen also had a secret. He always took more than his fair share of food from the town's storage barn than he needed. He'd store it in his house, day after day, and then go back to work.

As more families moved into town and started having kids, the town started to run dry. No one knew what was happening to the food, and many starved.

The food, of course, was in Galen's house. But one day, after Galen had been reassigned to the town's quarry because Jerol the stonecutter had starved to death, he was crushed by a rock and killed. When a new family moved into Galen's house, they found all of the food he had stockpiled and the town was saved.

Now, Banished does not have an explicit story line. Your little town minions do have names, gender and jobs, but that's about it. The above scenario, however, did actually happen in one my towns. The unscripted story is another aspect of Banished that I really liked.

Your town, its story and the life stories of all of your little townspeople is left to your imagination. Various community forums are filled with these little tales of town successes or failures, each unique and often hilarious in their own way. This open-ended structure is not without its ills, however.

There really isn't any technology progression, which is usually something common for the genre. You build one thing in order to have access to another. In Banished, you basically have all of the tools you need right from the start, and they never change. In fact, beyond merely surviving and growing your town, there really isn't much progression at all. This might be a turn off for some fans of these types of games, but it didn't bother me.

In fact, I really like Banished and think it is a fine addition to the library of those who like city-builder games. I think that its stripped-down aesthetic and high-level strategy help breathe new life into a genre that has seen better days. And after the unbelievable disaster that was the most recent SimCity game, we could all use a palate cleanser and a reminder of just how good these types of games can be when done correctly.

So, you've got ask yourself: Are you ready to get busy living?

Banished is out now and available for Windows PCs.

Steve Mullis is a Web producer at NPR. If you want to suggest an independent game worth featuring here, please write or tweet him. You can also follow the action on our gaming Tumblr, NPR Plays.