Accessibility links
Cool Or Creepy? A Clip-On Camera Can Capture Every Moment : All Tech Considered A new wearable camera called Narrative is designed to snap a photo every 30 seconds — automatically — so you don't miss a thing. But does everything and everyone in your day need to be photographed? 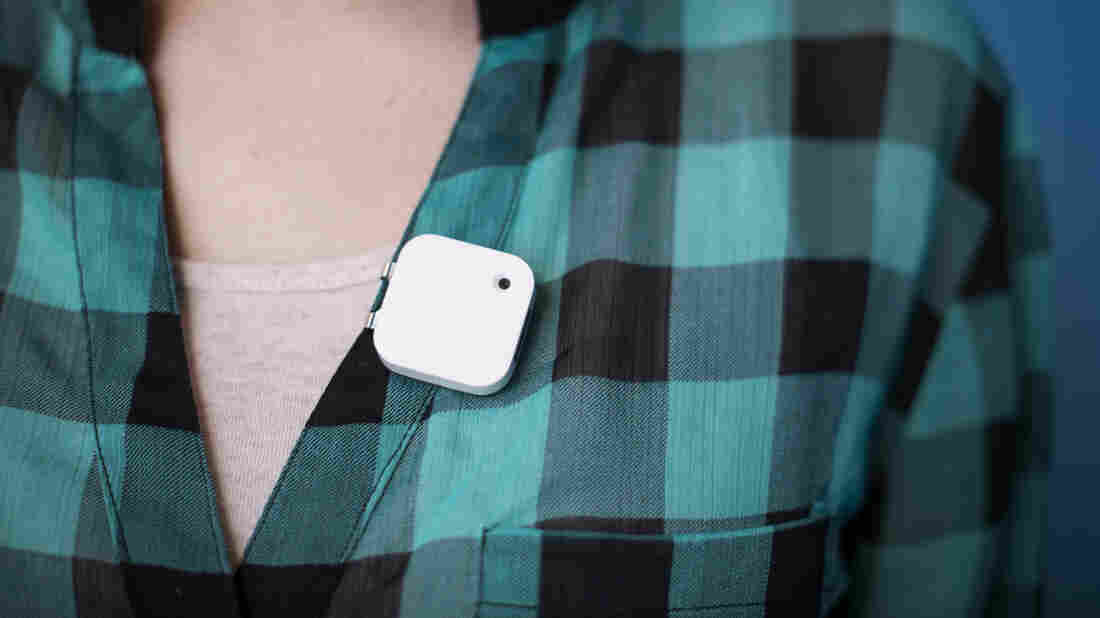 The Narrative clip is a lightweight wearable camera, capable of shooting 5-megapixel images. You clip it to your lapel and it shoots two photos a minute. Jim Tuttle/NPR hide caption 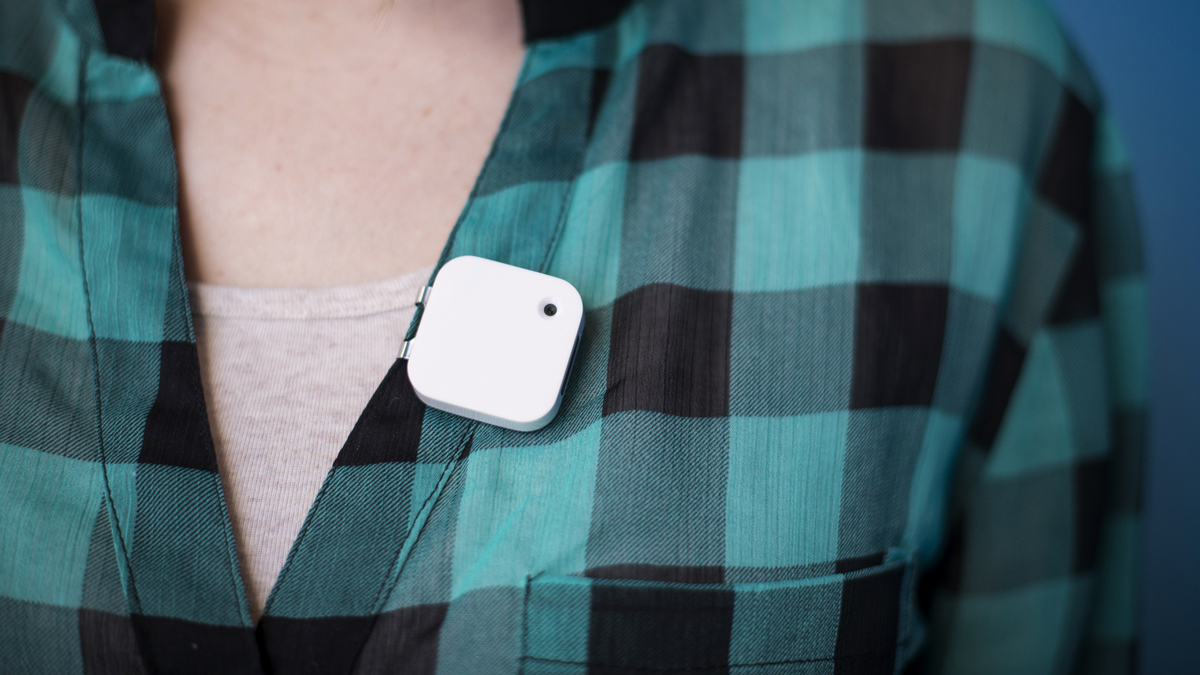 The Narrative clip is a lightweight wearable camera, capable of shooting 5-megapixel images. You clip it to your lapel and it shoots two photos a minute.

With digital cameras and camera phones everywhere, there are few moments we don't document. But some designers still think we're missing the opportunity to capture some important, simple moments. The solution: the Narrative Clip, a wearable camera that automatically and silently snaps an image every 30 seconds.

"The dream of a photographic memory has come true," reads the box. The Narrative is now on the market and sells for $279.

NPR photographer and Picture Show blogger Claire O'Neill has been fearing a device that would automatically shoot photos all day long, so she joined me in testing it out. (Claire reviewed the user interface and shows you all the warped, blurry images she captured in a post for the Picture Show. Check it out.)

"I already have too many photos to look at," she said.

The Narrative Clip is a lightweight square only a smidge larger than a postage stamp. A tiny lens is in the corner, capable of shooting 5-megapixel images. You clip it to your lapel and it starts shooting two photos a minute. Later, you can simply connect it to your computer to store the photo stream. A Narrative app then organizes what it thinks are the best shots of the day.

"I don't even have to try to remember anything. Great. I'm just gonna turn my brain off now. This is crazy," Claire said.

Or is it? Narrative's founder, a Swedish designer named Martin Kallstrom, says his wearable camera reacts to a real need: We don't often capture simple or serendipitous moments because we don't know they're significant until later.

"What I wanted to achieve was to have a tool to make it possible for me to document stuff that I experience while I experienced them. Without taking me out of that moment," Kallstrom said.

The always-on camera means being fully present, without pulling out a point-and-shoot.

"You have special moments in your life where you want to be fully in that moment. Maybe spend time with your friends, or your kids," Kallstrom said.

I wore the Narrative Clip while spending time with my friends, family and co-workers. The most common reaction to seeing a white square clipped to my shirt was actually: "Is that a radiation detector?" Since these aren't mainstream, I had to explain it was an automatically snapping clip-on camera.

There were many "that's creepy" reactions, too. Even my closest friends said they felt strange about being photographed this way.

Kallstrom says he designed the Clip so it's obvious that you're wearing it. And, he says, just because it's shooting doesn't mean the images go anywhere.

"We never publish stuff automatically on the Web. Through the app, it's always a manual, human decision behind every photo that gets published out of your stream," Kallstrom said.

A lot of the worries people had about being photographed were overblown, for now. Mainly because the Clip just doesn't shoot many really compelling images at this point. (See our slide show, below, of the very best photos the Clip could muster.)

Most shots in my stream were of my computer screen, people in meetings, and my hair, which accidentally covered the lens. This is partly why Claire, the photographer, is less concerned about privacy and more curious about the effect on our memories.

"I think this could potentially reshape the way you remember your life. Because these aren't the scenes you chose to remember. It's what this thing remembered for you," she says. The app does let users manually pick out images from their streams, but the work it takes to do so is pretty time-consuming.

If this all seems like a lot, tech investor and Narrative backer Evan Nisselson says we're just at the beginning of the wearable camera era.

"Within five to 10 years, wearable cameras and camera phones will replace 99 percent of digital SLRs and video cameras," he says.

A near future of clip-on cameras snapping away at every moment? Picture that.