Accessibility links
'Newsweek' Says It Found Bitcoin's Founder: 4 Things To Know : All Tech Considered For years, Reddit, tech blogs and mainstream media outlets have speculated about the mysterious Satoshi Nakamoto. Newsweek says it finally has the answer, but many people are criticizing the story. 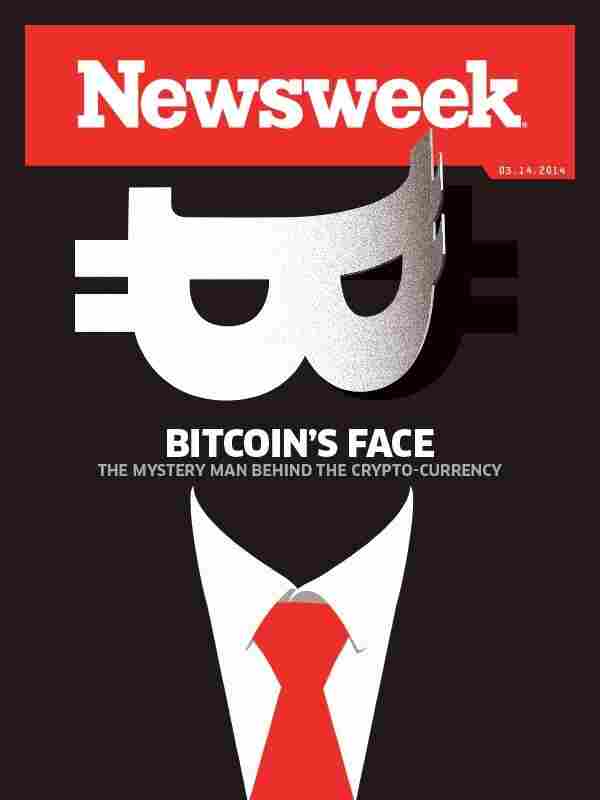 Newsweek's cover story reveals a man named Satoshi Nakamoto, who matches many characteristics of the elusive founder of Bitcoin but never explicitly admits to it. Via Newsweek hide caption 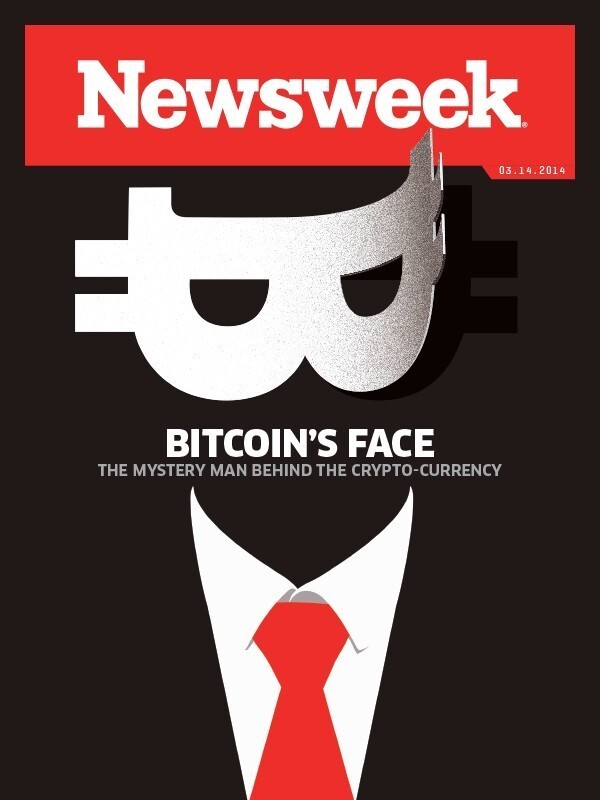 Newsweek's cover story reveals a man named Satoshi Nakamoto, who matches many characteristics of the elusive founder of Bitcoin but never explicitly admits to it.

In an interview with the Associated Press, the man Newsweek claims is the founder of Bitcoin denies he has any connections to the digital currency.

Dorian S. Nakamoto told the AP that he had never heard of Bitcoin until his son told him a reporter had contacted him three weeks ago:

Reached at his home in Temple City, Calif., Nakamoto acknowledged that many of the details in Newsweek's report are correct, including that he once worked for a defense contractor. But he strongly disputes the magazine's assertion that he is "the face behind Bitcoin."

As we told you last week in our Bitcoin Explainer For Those Who Don't Care About Bitcoin, the elusive founder of the crypto-currency goes by the name Satoshi Nakamoto. He/she/they released code and concept in 2008 but disappeared from cyberspace in 2011, when he/she/they stopped responding to emails from Bitcoin's key developers.

So who is Satoshi Nakamoto? That riddle has all the right elements of a mystery novel — intrigue, money, a dash of conspiracy — and it's no wonder that Reddit, tech blogs and mainstream media outlets alike have been speculating for years.

Newsweek's first print magazine cover since January 2013, when the publication announced it would discontinue its physical magazine, shows a dark figure in a suit, with glasses made out of the Bitcoin symbol. "Bitcoin's Face," it announces. "The Mystery Man Behind The Crypto-Currency."

But like the rest of Bitcoin's rocky existence, this too has a controversy.

1. Newsweek says the mystery man is — wait for it — Satoshi Nakamoto.

Yes, the name that everyone thought was fake is actually real, Goodman says. She reports that he is a 64-year-old Japanese-American man living in Southern California, whose family says he's distrustful of government, fearful of the media, brilliant and "an asshole." Satoshi is his birth name, but he goes by Dorian, Goodman reports.

It should be noted that the research methods leading to this conclusion are by no means scientific. Goodman only followed the trail of people named Satoshi Nakamoto and didn't look into the other suspects. It's a bit of a circular argument — if you only investigate people with one name, all the people you investigate will have that name.

So either this report is a self-fulfilling prophecy, or it's totally brilliant, as one Redditor said Thursday on the site's Bitcoin subreddit:

So you're telling me that the inventor of a novel piece of computer science, who wrote the code for bitcoin, and goes by the name of Satoshi Nakamoto...

...is actually a software engineer with a strong background in mathematics who has lived and worked in the tech industry in the US, and is called Satoshi Nakamoto.

How on Earth did anyone not figure this out already? Was everyone trying to find a conspiracy?

2. Dorian aka Satoshi didn't confirm he was the founder of Bitcoin.

Goodman struck up a conversation with Dorian Nakamoto by email, she writes, but he stopped talking to her as soon as she brought up Bitcoin. When she confronts him in person, he calls the police and tells her: "I am no longer involved in that and I cannot discuss it. It's been turned over to other people. They are in charge of it now. I no longer have any connection."

Without an admission, the evidence in the article is hardly irrefutable.

These are compelling similarities, but Nakamoto is not the only person who has them, because...

3. This isn't the first time journalists have come up with a name.

Joshua Davis of the New Yorker attempted a search in 2011. He used similar methods of analyzing Nakamoto's writing and came up with a short list of suspects, including British cryptographer student Michael Clear. Clear denied he was Satoshi but said "even if I was, I wouldn't tell you" — which of course led to even more speculation.

Adam Penenberg of Fast Company followed the New Yorker piece with an investigation finding a completely different short list of suspects. And online tech magazine Motherboard rounded up a short list of the short lists, which included Bitcoin developer Gavin Andresen and the government ("a conspiracy theorist's wet dream," the author wrote).

Goodman came up with a brand new suspect, one who perhaps has the most compelling story. But will this quell the fire of speculation, or simply fuel it further?

4. Some say that the story released too much personal information.

Regardless of whether Dorian Nakamoto is the founder, the story is garnering criticism for releasing so much personal information about him. Goodman writes about his car, and the magazine included a picture of both Nakamoto and his house, where the house number is visible. Some Reddit commenters said they already found his house on Google Maps.

Not to mention, if he is the founder, then he's probably super-rich. Doesn't this put him in danger?

@EntropyExtropy Good question. Pictures and info people are asking about (including residence and car) already public. His name too.#Bitcoin

@truth_eater @Newsweek Serious question: did you even consider that you might have just gotten an innocent man murdered? #lies #idiots

@SlammingAtom @Newsweek This man invented something that shaped our world. Should all inventors now fear murder? #Bitcoin

Still, Gavin Andresen, one of the key developers of Bitcoin, wasn't happy.

Andresen had told Goodman that he had only corresponded with the founder online and never talked by phone or met in person. "I go the impression that Satoshi was really doing it for political reasons," Andresen said. "He did not like the notion of banks and bankers getting wealthy just because they hold the keys."

But on Twitter, Andresen blasted Newsweek for "doxxing" Nakamoto, or publicly revealing his personal information.