Accessibility links
Oculus Rift: Virtual Reality Gets Closer To Your Living Room : All Tech Considered NPR's Laura Sydell is afraid of heights, so when she got a first-person view from atop a castle, the experience was dizzying. Is Oculus Rift, the headset she was using, the future of entertainment? 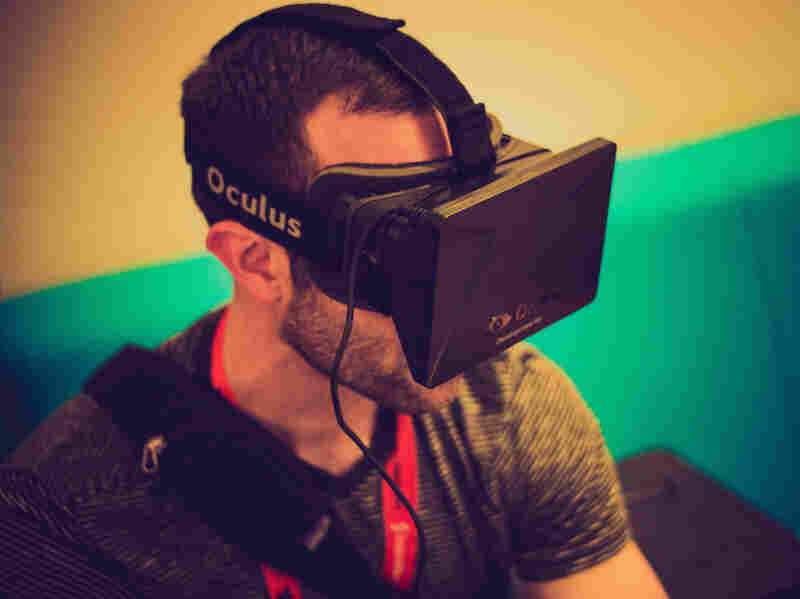 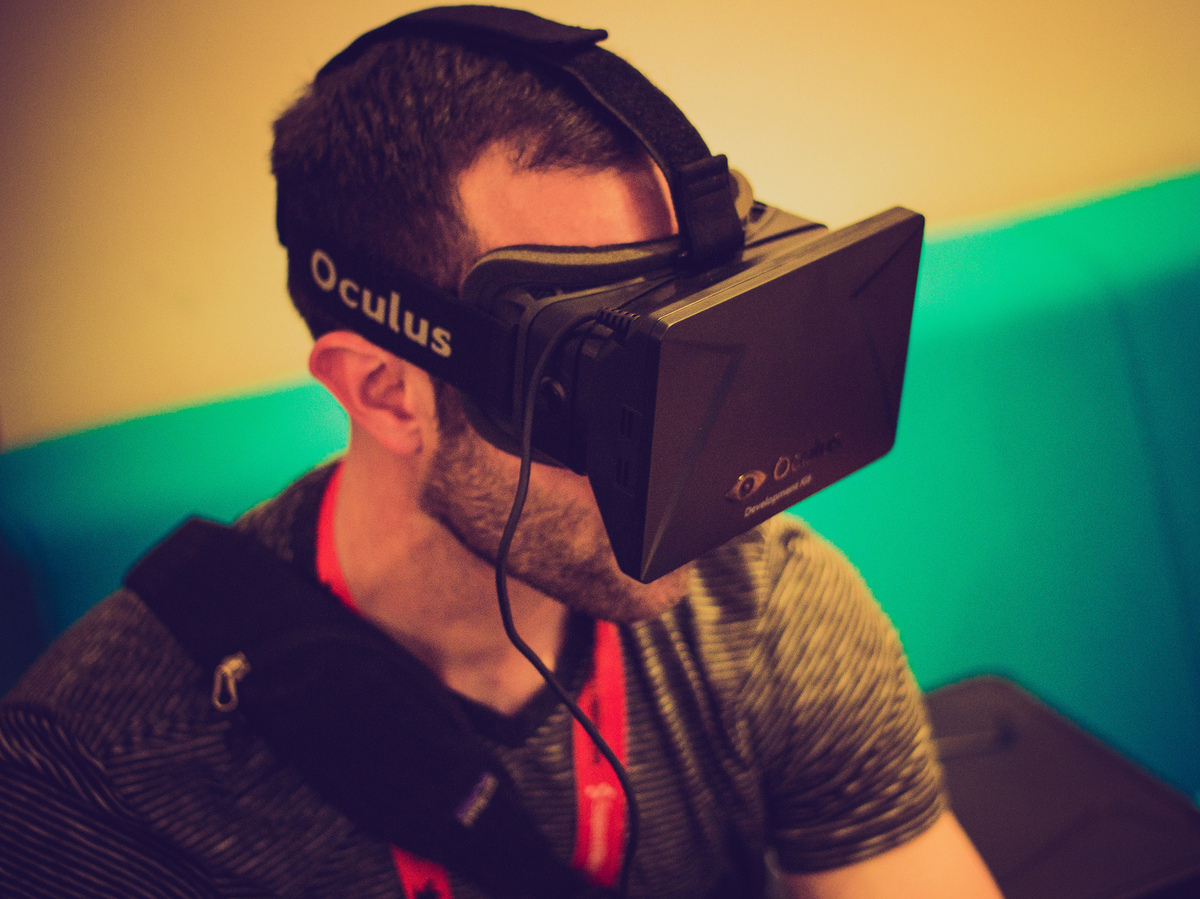 Going back to ancient times, the aim of storytellers has been to immerse us in an experience — of another place, time or point of view. This past week at the South by Southwest film, music and technology conferences in Austin, storytellers and great technologists showed off new ways to take us beyond cinema, or TV or even traditional video games. One of the most compelling experiences came via the Oculus Rift, a set of virtual reality goggles.

I had the opportunity to try the Oculus and experience a variety of possible uses. Among them, a visit to the land of the Seven Kingdoms, the fantasy world of HBO's Game of Thrones. HBO has a traveling exhibition that it set up at SXSW. Along with costume displays and exclusive videos of interviews with the actors and creative team, it's a chance to don the Oculus Rift and get a ride up the winch elevator to the top of the wall at Castle Black.

A helper at the exhibit assists you in putting on the Oculus Rift, which is about the size of a pair of ski goggles. But, inside it are sensors and screens. The helper puts you in a booth and adds an audio headset. The next thing I knew, I felt as if I was going up the elevator and looking out to the snow-capped mountains. There's a fan in the booth that makes it feel as if the wind is blowing. I am afraid of heights and I started to tremble as I gazed out across the landscape.

Then, I saw troops heading toward the wall with torches. They started to shoot fiery arrows and suddenly I was hit. It didn't hurt, but the experience was more real than any I've ever had with a book, movie, game or TV. When I took off the goggles and stepped back out of the booth, I was a little dizzy and my heart was beating rapidly.

"You simply can't believe how much your brain is being tricked," says Ian Cleary, whose marketing firm, Relevant, designed the exhibition. "Each layer, your brain gets more deeply and deeply fooled and it just kind of makes you either smile or maybe let out a little yelp."

The creator of the Oculus Rift is Palmer Luckey. A few years ago, Palmer realized that technology had reached a point where it was possible to monitor the motion of your head, track your eyes and put compelling graphics on screens small enough to fit into goggles. "All those pieces coming together allow us to finally trick people into believing that they're in a virtual space, instead of just watching what happens through a window or a screen like you would in a film or TV," Luckey says.

About a year ago, Luckey and his company Oculus VR, made the Oculus software and hardware available to developers for around $300. The company has sold about 60,000 Oculus developer kits.

At SXSW, Oculus VR set up a popup headquarters where it was possible to try a few other uses of the goggles. This time, I opted for a mellow experience. I put on the Oculus and I was sitting in the studio of Canadian musician Patrick Wilson. I felt as if I was sitting next to him and watching him play. I turned my head and I could look around his studio at bookshelves, coffee cups, a desk and a shaggy dog breathing easily. Wilson sat at his keyboard singing a soft melody. 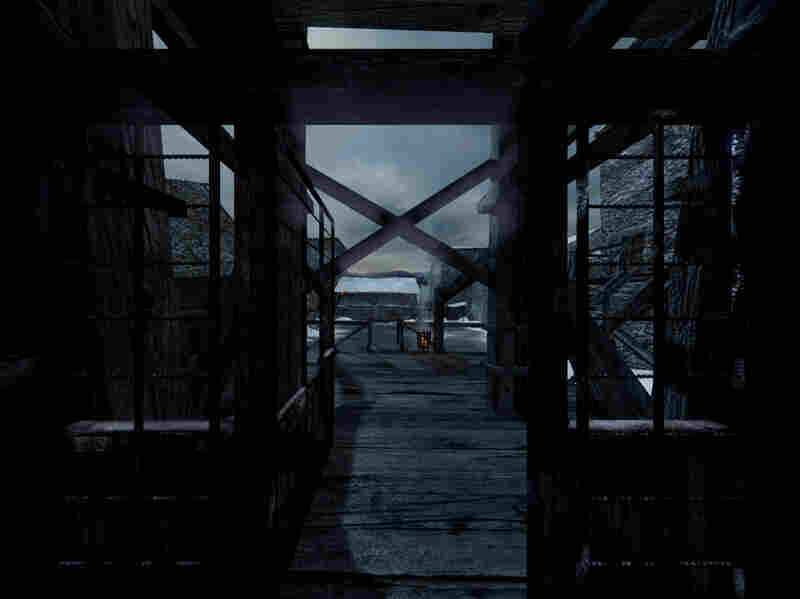 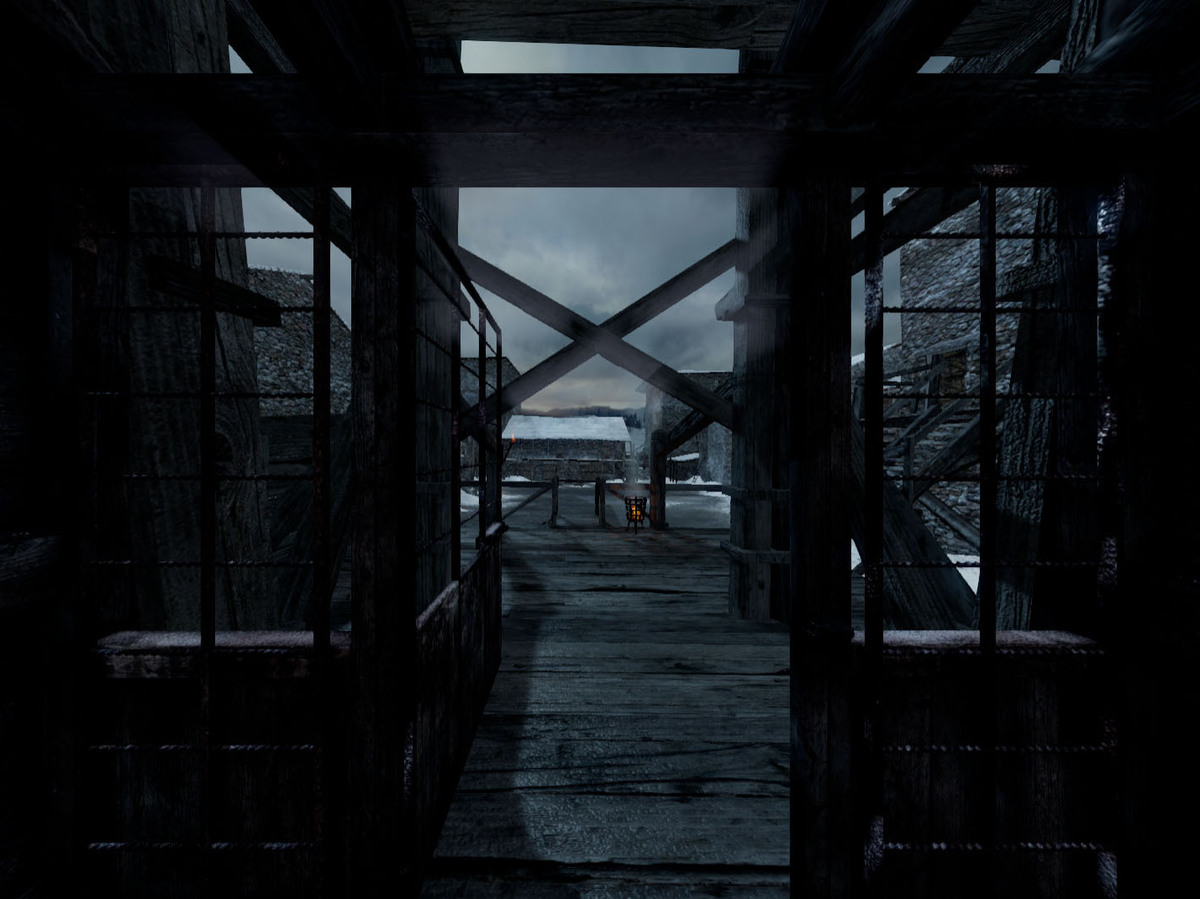 The creators of this moment are Felix Lajeunesse and Paul Raphael. Lajeunesse says they already were interested in 3-D movies — but they were frustrated by technologies that forced people to sit in a theater. "We thought, wouldn't it be great to go further and get rid of the frame and just be there — just a pure experience of presence," he says.

As soon as they heard about the Oculus Rift they got a kit and used a camera they built that shot in 360 degrees. Lajeunesse says this allowed them to create something beyond a traditional film narrative.

"It allows you to live an experience," he says, "and when there's a human being there if you approach it the right way it becomes an intimate experience. You almost have the impression that you're with someone else." In fact, it did almost feel as if I was with someone else.

This is just the beginning of exploration of the Oculus for these filmmakers and many others. Though it may take some time for it to be found on shelves at your local Best Buy.

Oculus creator Palmer Luckey imagines people will be able to climb mountains, go to outer space, explore caves and have experiences that we couldn't have in real life.

"That's why we have epics going back to ancient times all the way to modern movies [and] video games," he says. "People want to experience things they can't experience in their real lives. They want to see things that are fantastic and virtual reality takes that to its ultimate conclusion. You're not just reading a book or watching someone else do it in a movie. You're actually able to do it yourself."

This degree of realistic virtual reality is likely to raise dystopian fears like those expressed in the Hollywood blockbuster The Matrix, where human beings end up being hooked up to a machine and ruled by an out-of-control computer system. But like all visionary inventors, Luckey dwells on the positive. He imagines a day when we will be able bring together people from all over the world in virtual reality spaces allowing them to get to know each other.

For now, the only way for you to experience the Oculus Rift is to catch up with the HBO traveling exhibit or connect with one of the many developers who are experimenting with it. Luckey says there's no date yet for when the Oculus Rift will be available for sale.