Accessibility links
Twitch Boosts A New Pro Category: Video Game Player : All Tech Considered Watching a great gamer is like watching a tennis or baseball pro: "If they're really good then you can watch and learn," says Megu Kobayashi, who watches gamers on a site called Twitch. 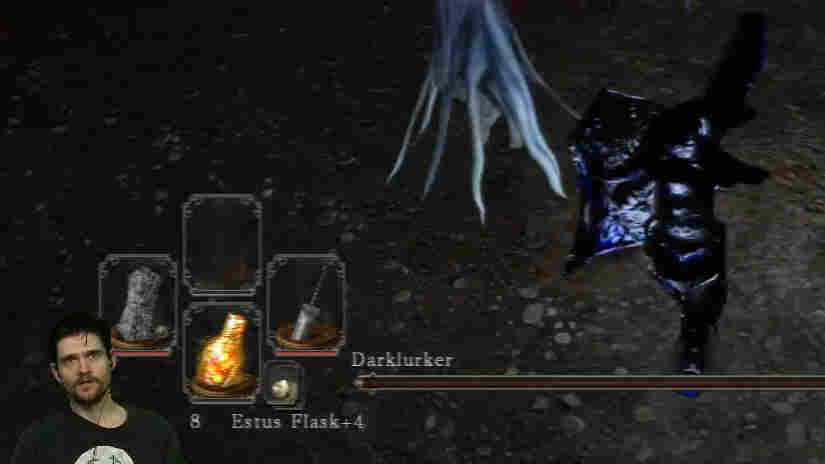 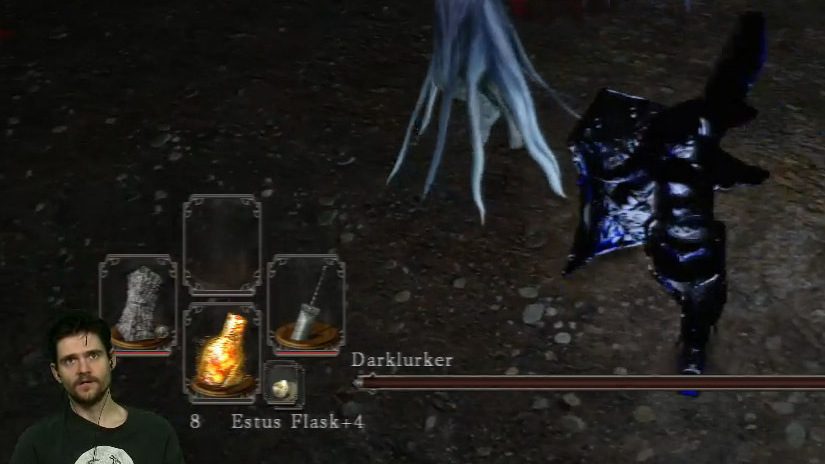 "I make a living attempting to beat video games on my show, and people watch," says Jayson Love, whose stage name is Man.

It may not surprise you that Netflix uses more bandwidth at peak hours than any other company, followed by Google and Apple. No. 4 on the list, though, is Twitch.tv.

Twitch is a company devoted to live interactive broadcasting of people playing video games. It's helping to launch a new type of broadcast professional.

"I make a living attempting to beat video games on my show, and people watch," says Jayson Love. His stage name is Man, and his show is Man vs. Game. In each episode, viewers watch Love take on a different game. Most recently, he played Dark Souls II.

Love broadcasts his gameplay over Twitch from the basement of his Montana home between midnight and 8 a.m. Most of the show, the live gameplay dominates the screen, and Love's face and shoulders are seen at the bottom corner. The appeal of the show is as much Love's humor and personality as it is his gaming skills.

Nearly 170,000 people follow his channel, and Love says he could make six figures this year.

Not surprisingly, playing video games wasn't Love's college major — that was Japanese language and culture. He got married and moved to Montana, and his days of travel to Asia were over. He worked at a series of low-paying retail jobs that he describes as soulless.

"I just felt directionless and lost," he says. Love asked himself what he liked to do: "I like performing. I like the Internet. And I like video games."

Initially, he imagined doing some kind of YouTube video blog of himself playing; then he discovered something called Justin.tv, which let people stream live broadcasts of all kinds.

A Father Plays Call Of Duty With His Son, Watched By Thousands

"I really enjoyed watching people play video games," Shear says. "There was a whole community of people doing it on the site."

Twitch developed ways to help gaming broadcasters make a living. You can run ads against your show. You can add a subscribe button so fans can pay to watch without commercials and have special live online chats. The content ranges from comedic shows like Man vs. Game to competitions between top players. Twitch says it's got 5,100 people making money by selling ads and subscriptions for their game channels.

"There's now people who spend their whole life broadcasting these video games. You have big tournaments. You have people who run special events with their most dedicated fans," Shear says. "It's really that new profession, which is video game entertainer."

At a bar in San Francisco, another startup is making a name for itself using Twitch. Every week, Showdown eSports takes over The Foundry and broadcasts live gaming.

On a recent night, a couple of hundred people showed up. Everyone can sign up to play a game of their choice while Lewis does a kind of talk show interview around it.

A player named Fernando Padilla sat down to play League of Legends. Padilla showed off how he'd won the past six games in a row.

Padilla smiles at the camera. "Yeah, I'm gonna brag," he says looking excited to have someone notice his gaming prowess.

A lot of Twitch fans are here. Megu Kobayashi says she watches Twitch the way tennis players like to watch Wimbledon to see how the pros do it.

"If it's a game that I'm really into, I think Twitch provides a lot of strategy," she says. "If they're really good, then you can watch and learn."

Some of the people here, such as Arnie Salazar, have tried to broadcast themselves. Becoming a pro video game player is like a new kind of dream — the way being an actor or a pro athlete is.

Recently, Twitch made headlines when 100,000 people played a game of Pokemon together. Twitch now has 45 million monthly active users and growing.

But the odds of making a living as a professional gamer may be just as steep as making it as an actor or a tennis star.