Accessibility links
A Video Game Meant To Take Us Back To The Physical World : All Tech Considered Ingress, an innovative game from a Google startup, is designed to get its players more engaged with each other. And as the game evolves, the writers respond to actions taken by players. 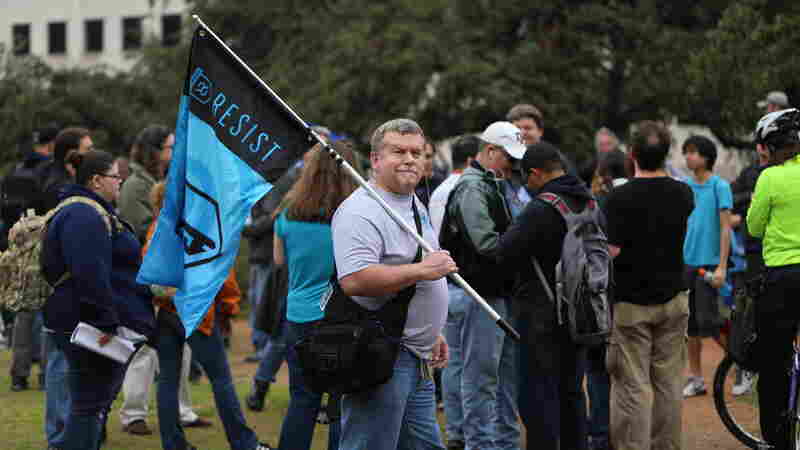 People gather to play Ingress in Austin, Texas. The video game has been downloaded 2 million times and is popular in the U.S. and Europe. Niantic Labs hide caption 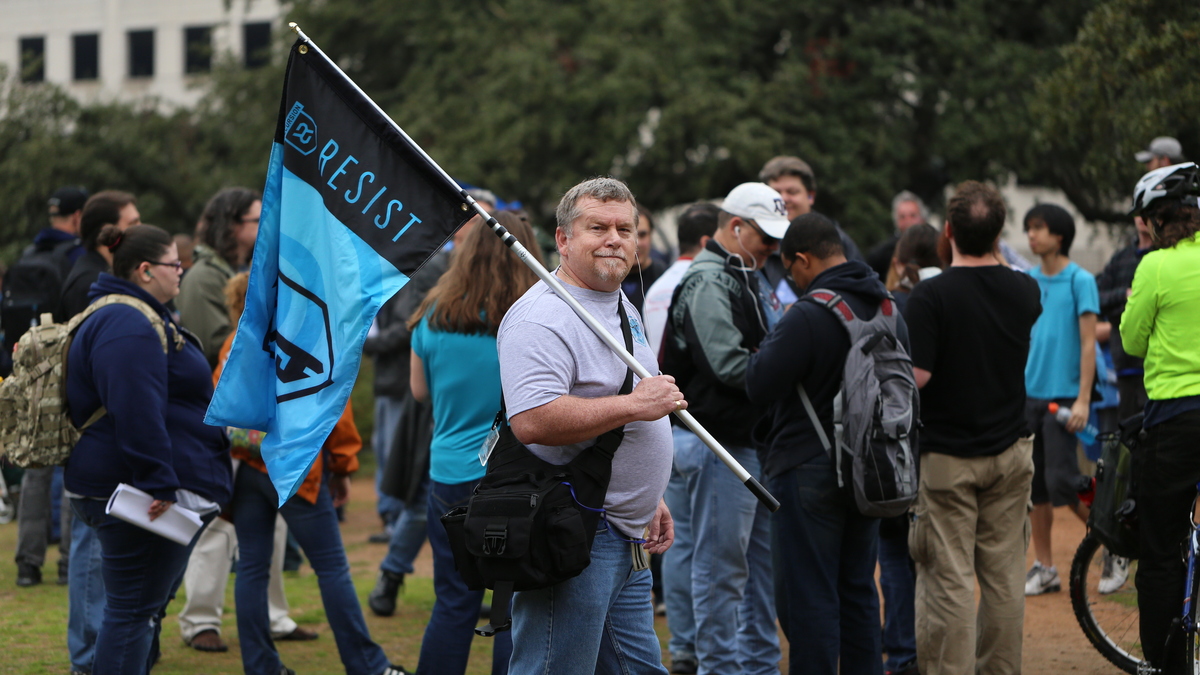 People gather to play Ingress in Austin, Texas. The video game has been downloaded 2 million times and is popular in the U.S. and Europe.

Mobile phones and computer screens can distract us from engagement in the real world and that's been especially true of video games. But, there's an innovative game being played around the globe that's designed to use the same technologies to get its players more engaged with each other and the physical world.

While it's not unusual to see someone out in the open glancing down at a cell phone, on a recent Saturday afternoon as I walk into Republic Square Park in Austin, Texas, I see a cluster of about 100 people looking down at their phones.

I ask one of them what's going on. "It's an incursion event here," he says.

Frankly, he sounds insane. But, he's not. His name is Ramsey Oklah and he and the others gathered here are playing Ingress. The group is divided into warring factions and they are shooting virtual missiles at one another using an app on their phones. Both sides want control of this spot in the park.

Oklah says they can't fight it out from their homes. They have to meet up in real locations.

"I'm actually from Oklahoma" says Oklah. "I'm here for work right now." But Oklah says he flew in early just to meet up with friends to play the game.

"A lot of these people here today that I'm meeting I've been talking to for months," he says. "Being a global game, we have to interact with people not just locally but all over the place and it really brings people together." 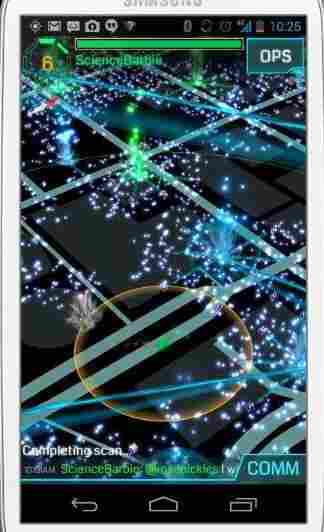 A screen in Ingress shows "exotic matter" a virtual blue-green fog that appears at specific locations around the world at certain times. Niantic Labs hide caption

Ingress has been downloaded 2 million times and is popular in the United States, Australia, Germany, Italy, Sweden and Switzerland, according to App Annie, which keeps track of downloads.

Here's the basic plot of Ingress: Something called "exotic matter," a virtual blue-green fog that can be seen on computers and mobile devices, started appearing at specific locations around the world at certain times. One side in the game, called the Resistance, believes this matter has been put here by a dark alien force. The other side, the Enlightened, thinks the substance holds the key to a bright human future.

The two sides fight it out in real locations across the globe.

Campbell, a 29-year-old restaurant manager from Beaumont, Texas, says he's learned a lot about his community from the game.

"I'm from a relatively small town. I was born there. And I didn't know until I started playing this game that Thomas Edison actually came to Beaumont and turned on the first generator to power the first electric lights," he says. Campbell found out this history "at a museum that is a portal that I never knew existed before I played this game."

This is exactly what John Hanke was hoping would happen when he created Ingress. Hanke runs Niantic Labs, a startup inside Google. He is also one of the creators of Google Earth.

"We wanted to experiment with this idea that you could use technology and mobile apps to get people more deeply in touch with the real world instead of the opposite — instead of people tuning out the real world and focusing only on their technology," he says.

Ingress uses Google Plus and YouTube, where there's a regular faux newscast that reports on players' activities and events designed by the game creators as if they were real.

Players are also encouraged to upload their own videos. Among the most popular player videos was a call to arms for the resistance made by a group that included Lisa Compte. I spoke with her a bar in Austin where players were having a beer while they fought it out.

Compte says they specifically made their video because they wanted to be part of the story. "We kind of forced our way into the plot," she says.

Flint Dille, who leads the creative team for Ingress, remembers their video. "We view our players as like our collaborators," he says. "They're part of the team."

Dille, who has written for film, TV and video games, says Ingress is a totally new writing experience. "The story unfolds incrementally and daily; it's like news," he says. The writers for Ingress are constantly responding to actions taken by the players.

Sometimes characters in Ingress interact with the players during chats on Google and sometimes they appear in the real world at events, which may explain what happened to this reporter in Austin.

I interviewed one of the players and ask for her name.

I press her for her real name and she says "Rowan Badger." An odd name, but I accept it. Ten minutes later, Badger realizes that I'm not a character in the game but a real journalist.

"Since it's not in-game, my actual last name is Hagemann," she says "In-game I use Rowan Badger as my nickname."

Shakespeare famously wrote "All the world's a stage and all the men and women merely players." Ingress takes the great Bard's words to a new level.

In the audio of this story, as in a previous Web version, we incorrectly identify one game player as Robbie Cable. He is Robbie Campbell.