Accessibility links
Innovation: A Gadget That Scrambles The Egg Inside The Shell : All Tech Considered This new kitchen tool promises to scramble egg whites and the yolk to create delicious culinary creations, and save you from washing a whisk. A soft cradle keeps the egg from breaking. 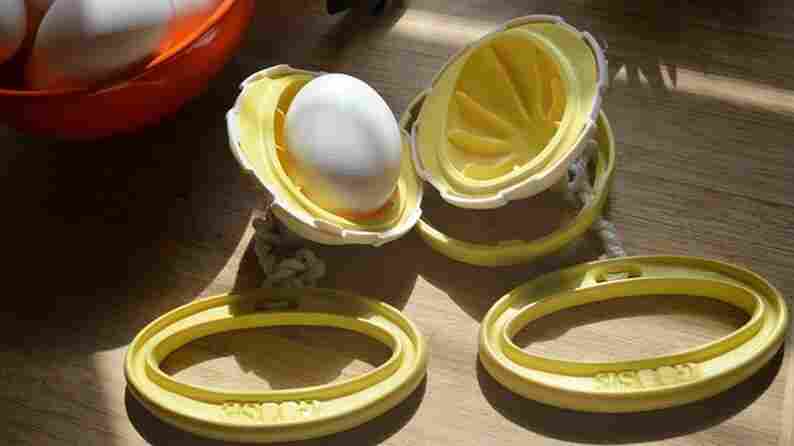 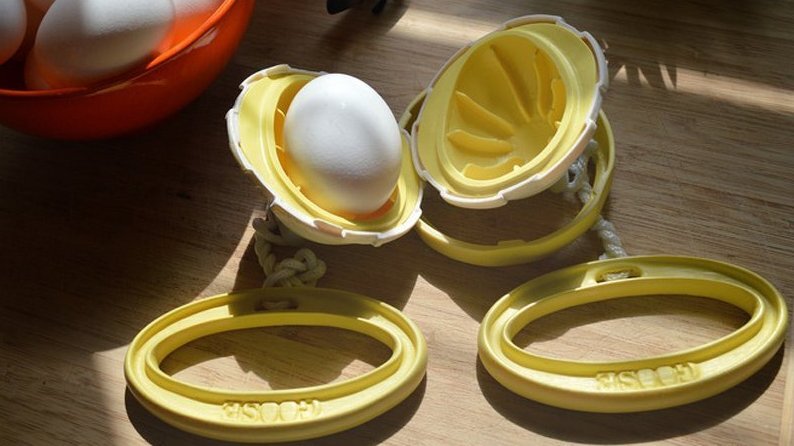 The Golden Goose will retail for around $24.

In our "Weekly Innovation" blog series, we explore an interesting idea, design or product that you may not have heard of yet. Do you have an innovation to share? Submit with this form. 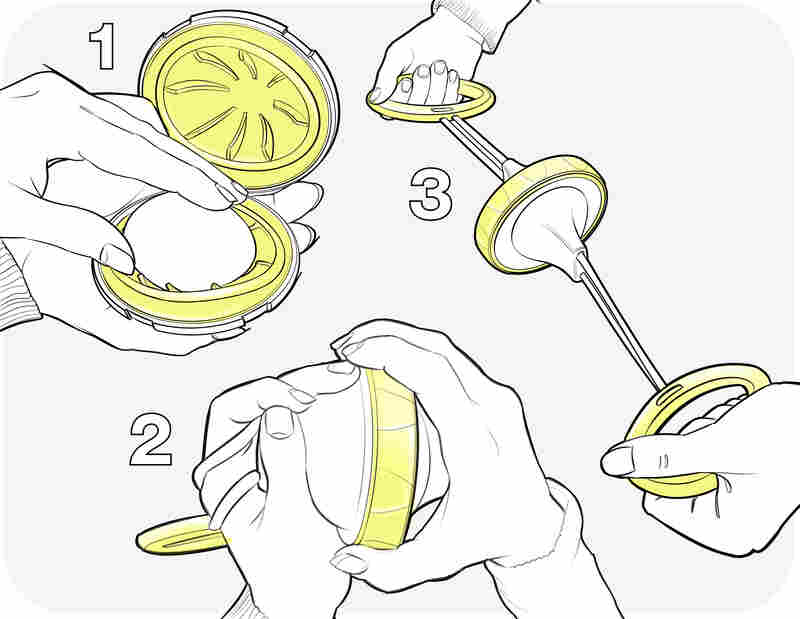 If this egg scrambling tool works as promised, your egg can come out of its shell with the yolk and egg already mixed. You could hard or soft boil, fry, scramble or devil them into what creator Geraint Krumpe calls "golden eggs," named for the eggs' creamy, soft yellow color when they come out.

"I was laid off from a company I worked for for 11 years," Krumpe says, when asked how this all started. "So I had to get creative."

Krumpe started a product design company, and last Easter he was surfing YouTube videos and found inspiration. "I found a video with a science guy spinning an egg inside a shirtsleeve. So I said, I have to try this. I stayed up late and broke a bunch of eggs trying to get one to work," he says.

Eleven months later, after a lot of development and testing, Krumpe and his company released the kitchen creation he calls the Golden Goose. It works by rotating an egg back and forth at an accelerated rate to mix the yolk and egg together without introducing any outside air. A soft cradle nestles the egg and holds it center, keeping it from breaking during the back-and-forth motion.

The device scrambles an egg inside the shell in about 15 seconds. 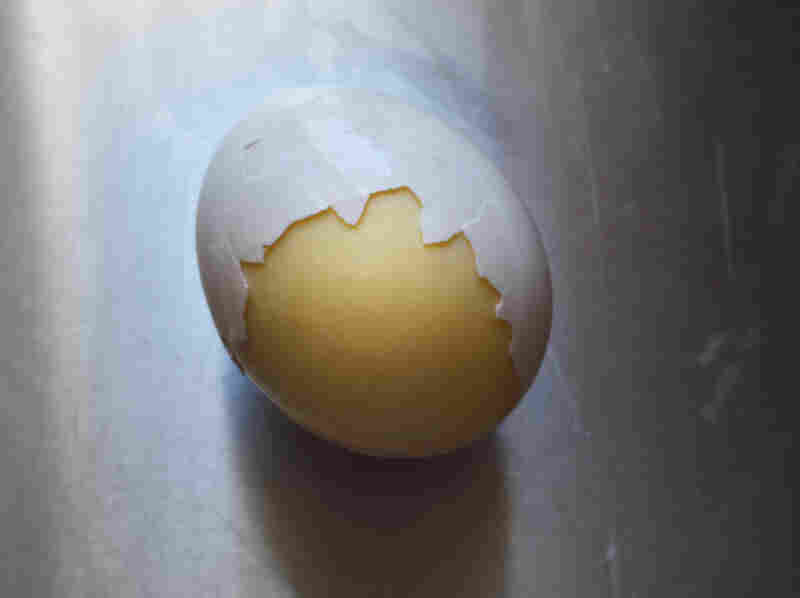 A hard-boiled "golden egg," which was scrambled inside the shell before boiling. Courtesy of Y Line Product Design hide caption 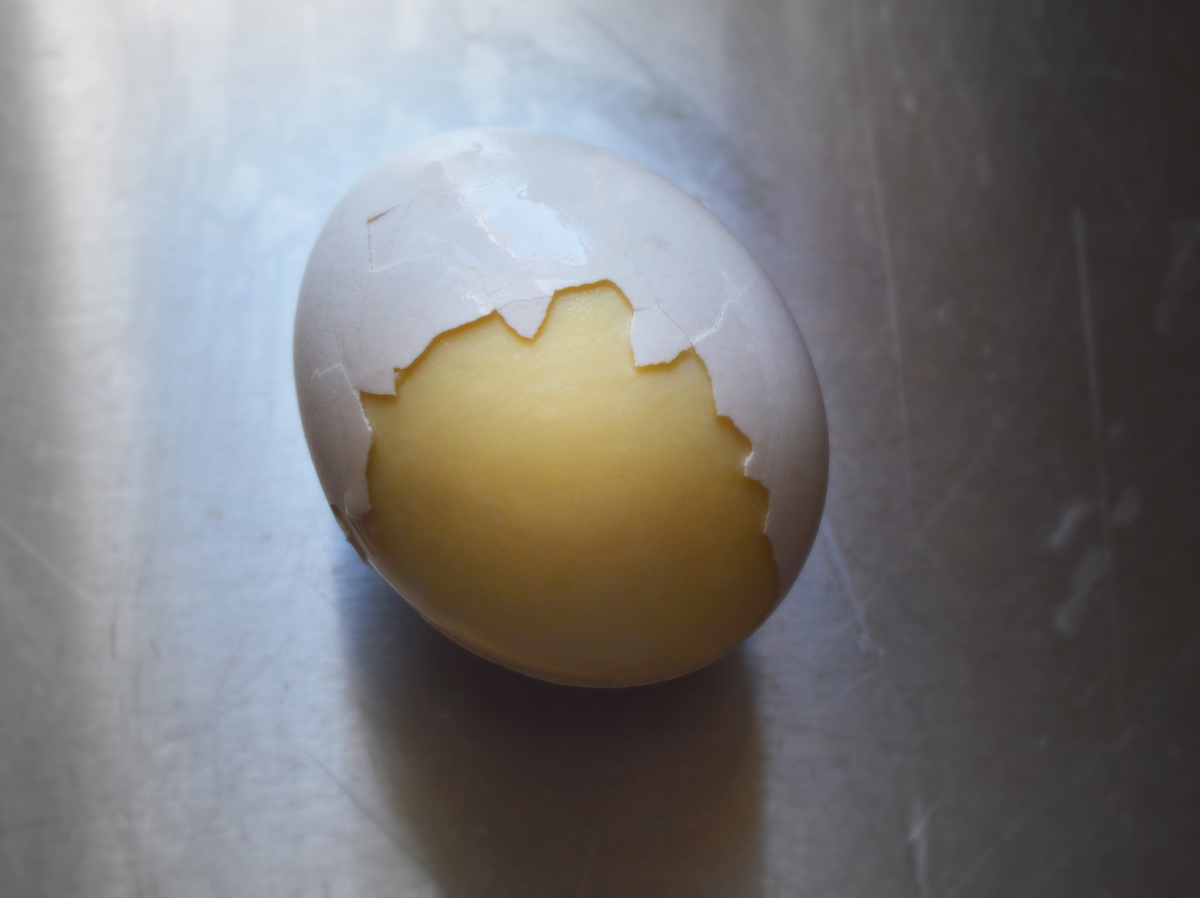 A hard-boiled "golden egg," which was scrambled inside the shell before boiling.

"You haven't entered any outside air or other gases into the mix of protein and fats, and it allows for this chemistry to happen that has culinary benefits, because depending on what temperature the egg is at and for what time period, you can achieve a range of different flavor profiles and even different colors," Krumpe says.

Imagine all the golden egg creations! Krumpe tells us that a hard-boiled golden egg comes out tasting like savory custard. And if you simply scramble the egg in its shell and crack it into an iron skillet, it creates a tasty scrambled egg dish because you never whisked in any outside air. Plus, there's a little less dish washing.

"This way you don't have to wash a fork and bowl, and it has been suggested that you could spend a lot of time as a prep cook scrambling eggs and putting them in the fridge for breakfast or baking. Here they're pre-scrambled. It doesn't take much effort and it's the best possible way to scramble," Krumpe says.

This invention is already funded, reaching more than $60,000 in support from 1,800 backers, way above its original $34,500 fundraising goal.

Now that it's funded, the plan is to manufacture the devices for the donors this summer and then take Golden Goose directly to consumers. Krumpe says it will retail for around $24, but probably won't be for sale until November at the earliest.

Check out the Kickstarter page for yourself, but a warning, if you're hungry: It includes many photos of delicious egg dishes.